In this article I want to take a look at the recent Warhammer 40,000 releases for Space Marines, including the codex which we have been sent! 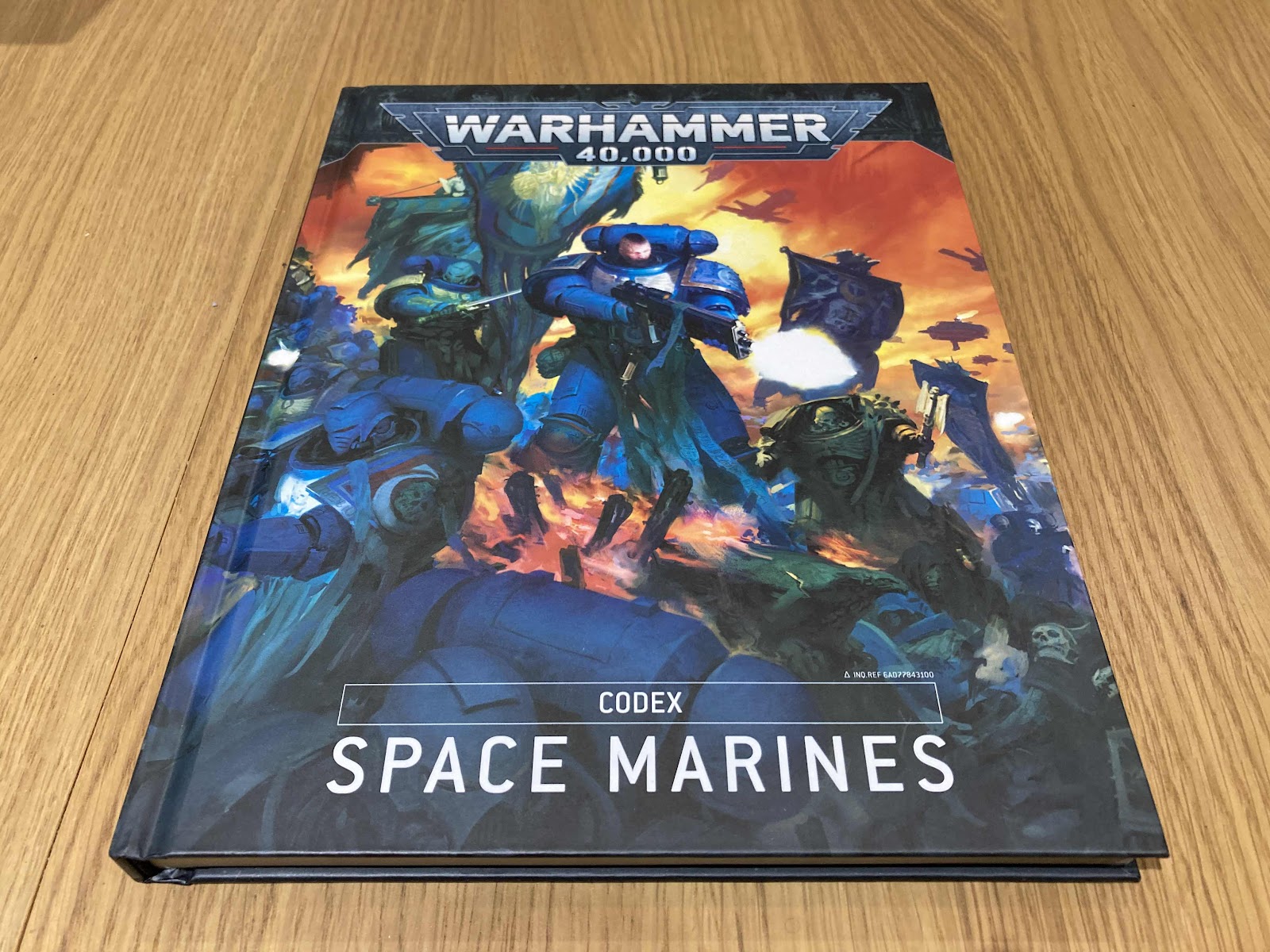 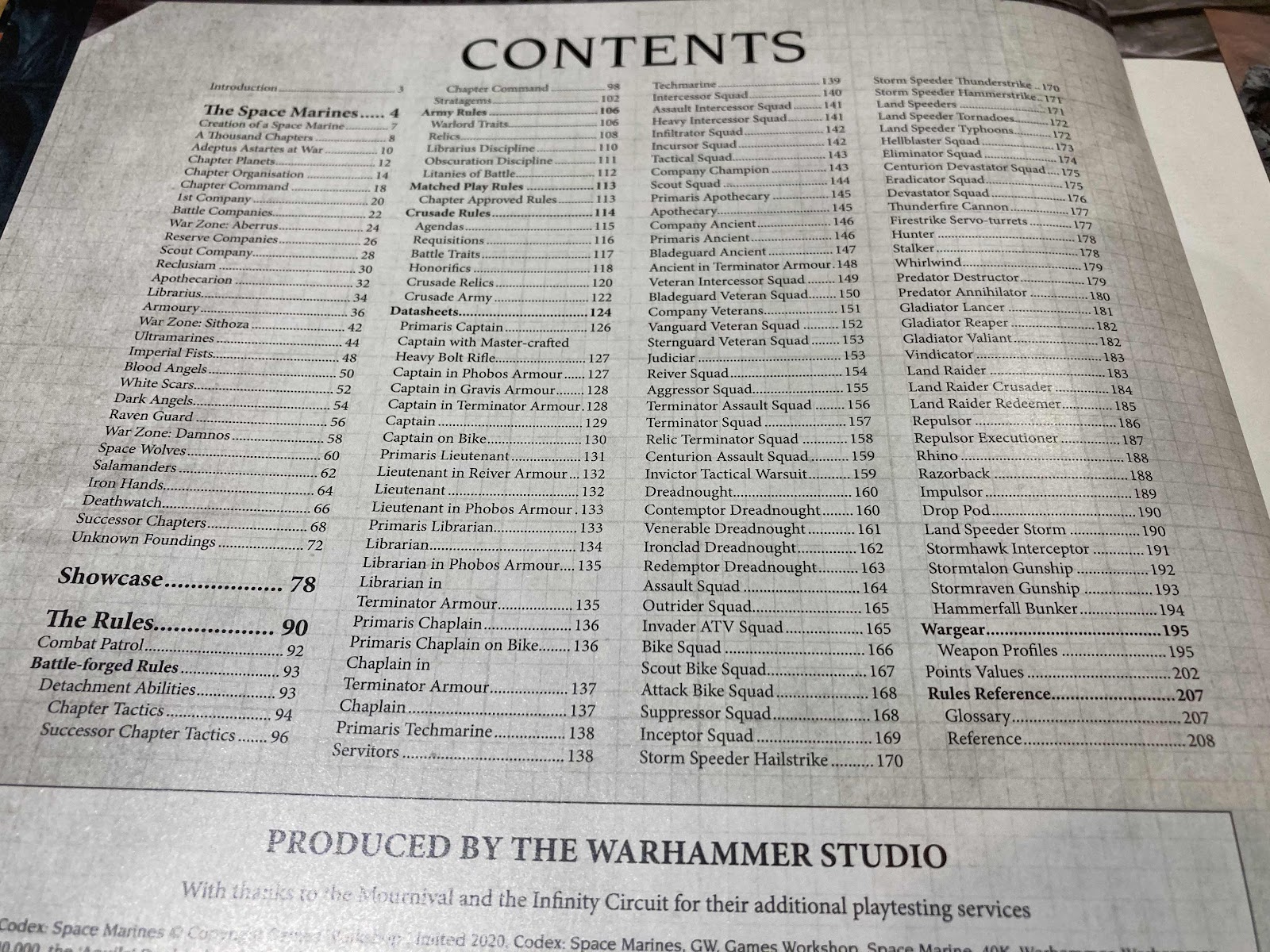 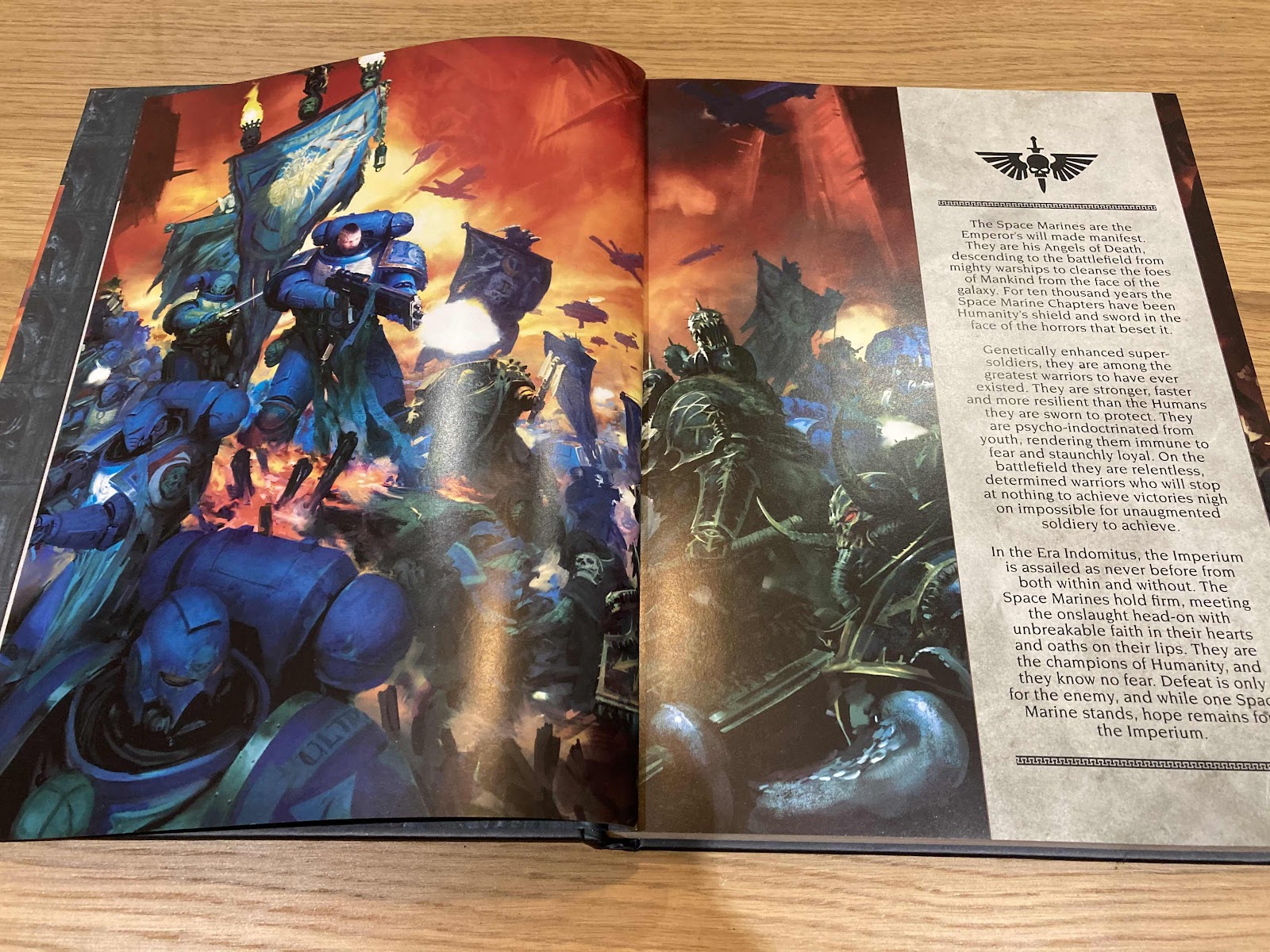 First of all I wanted to take a look at the book, now I know that it has been less than 12 months since the last one, but I have to say this is the best Space Marine codex since I have been in the hobby - roughly 27 years. As always, I am not getting into the rules and how powerful the army is as that just isn’t why I play the game. Instead I will be looking at some of the more narrative and aesthetic choices within the book. 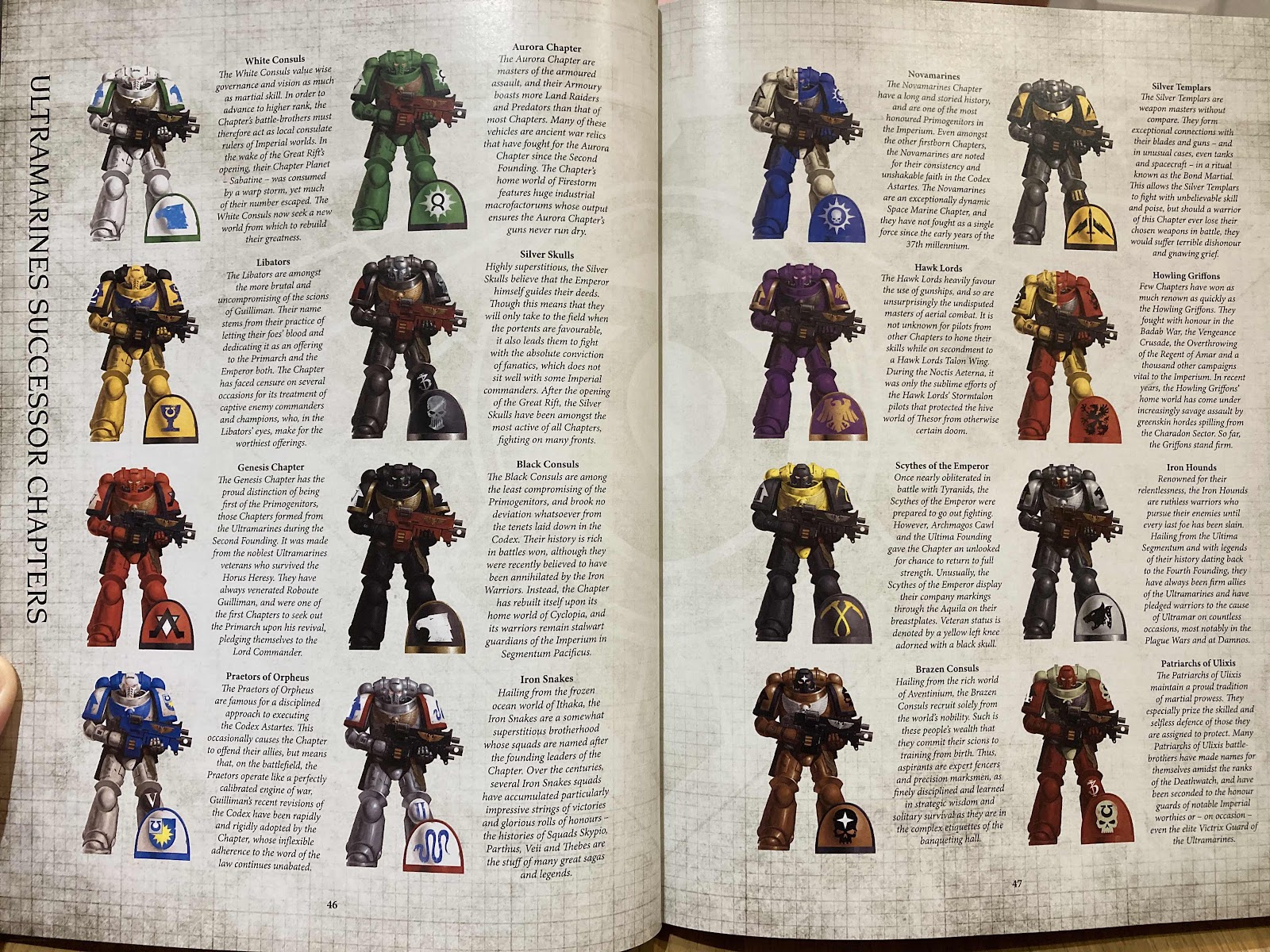 For me, my favourite part is the Crusade section. It gives players who want to craft a narrative a fantastic way to create and develop their own chapters and stories. This has been done very well with the inclusion of battle honours and injuries but also with the marine-centric agendas for use when playing in less competitive games. This progression helps develop and build character in a really fun and positive way. They encourage interesting objectives and tasks to complete that get away from the very vanilla ‘place 4 equidistant objectives around the board’. War is not balanced and different combatants have different goals and objectives. The Crusade section really helps that grow when used in conjunction with the rule book. 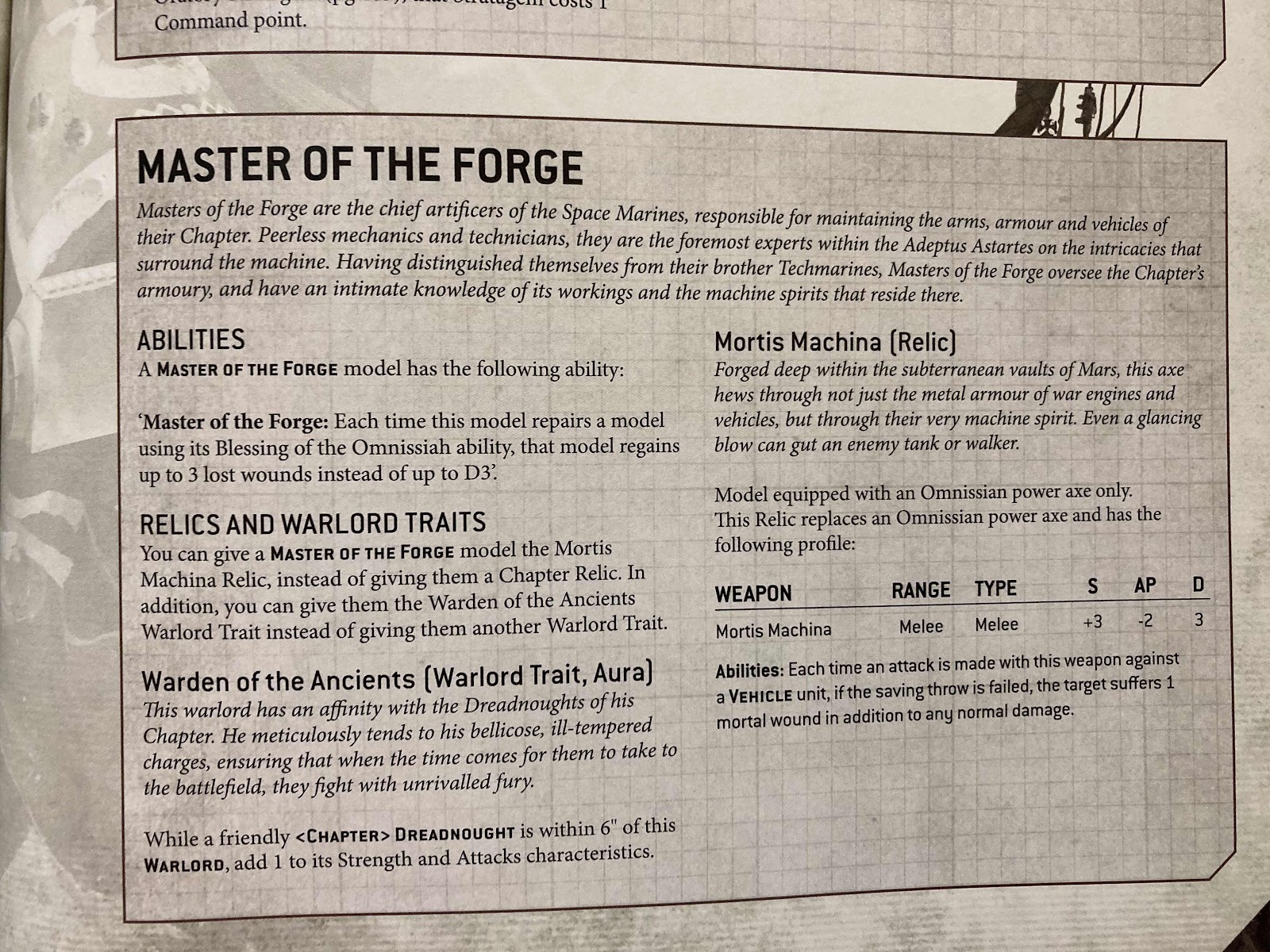 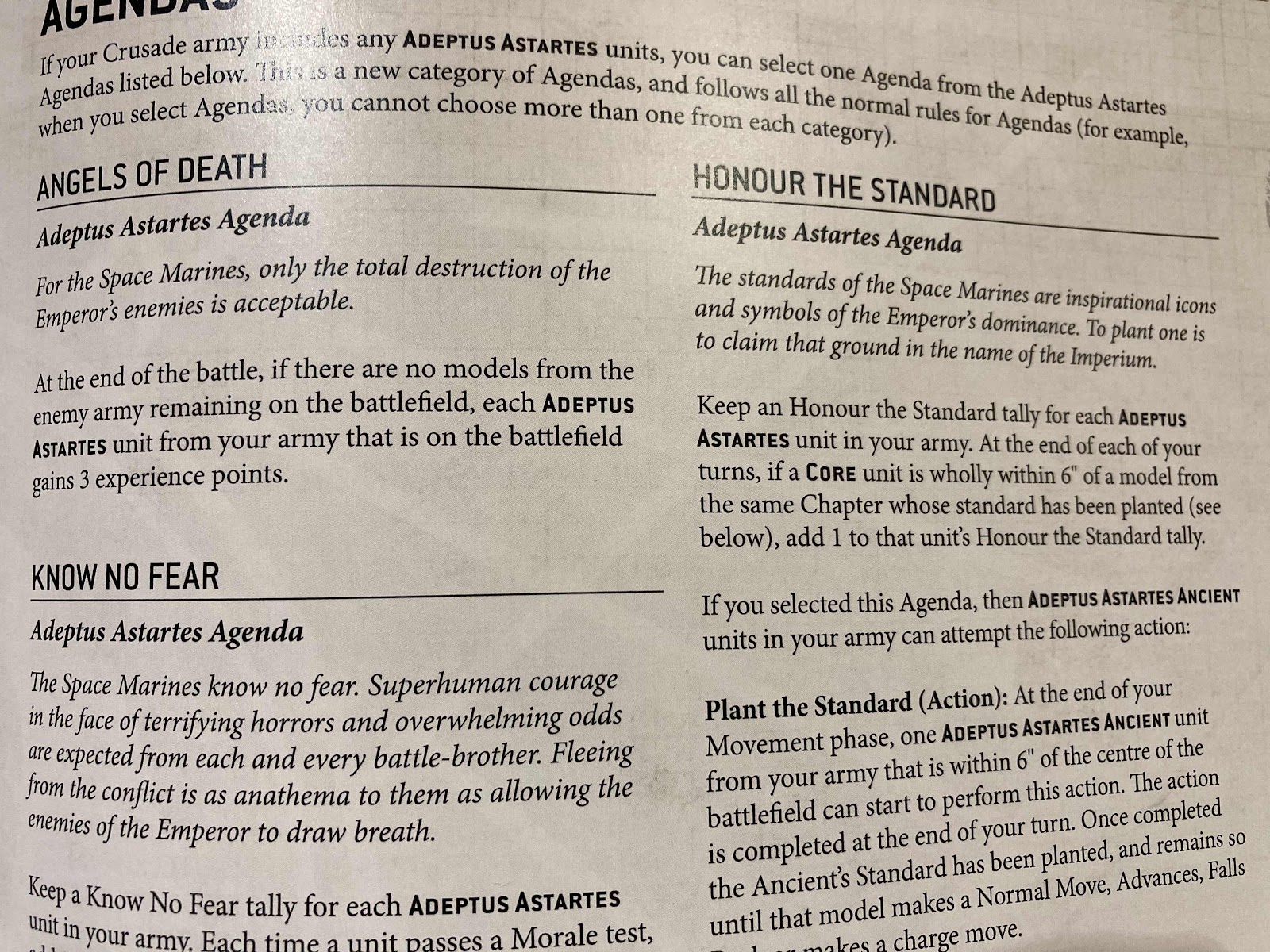 This leads me on to the ability to create your own chapter hierarchy - something that I think has been long overdue for some time. The one provided in the codex is very solid and I can imagine great successor chapter guidelines also coming with their respective supplements. Only problem with that is that I want the information now as I am currently starting the creation of my chapter lol. 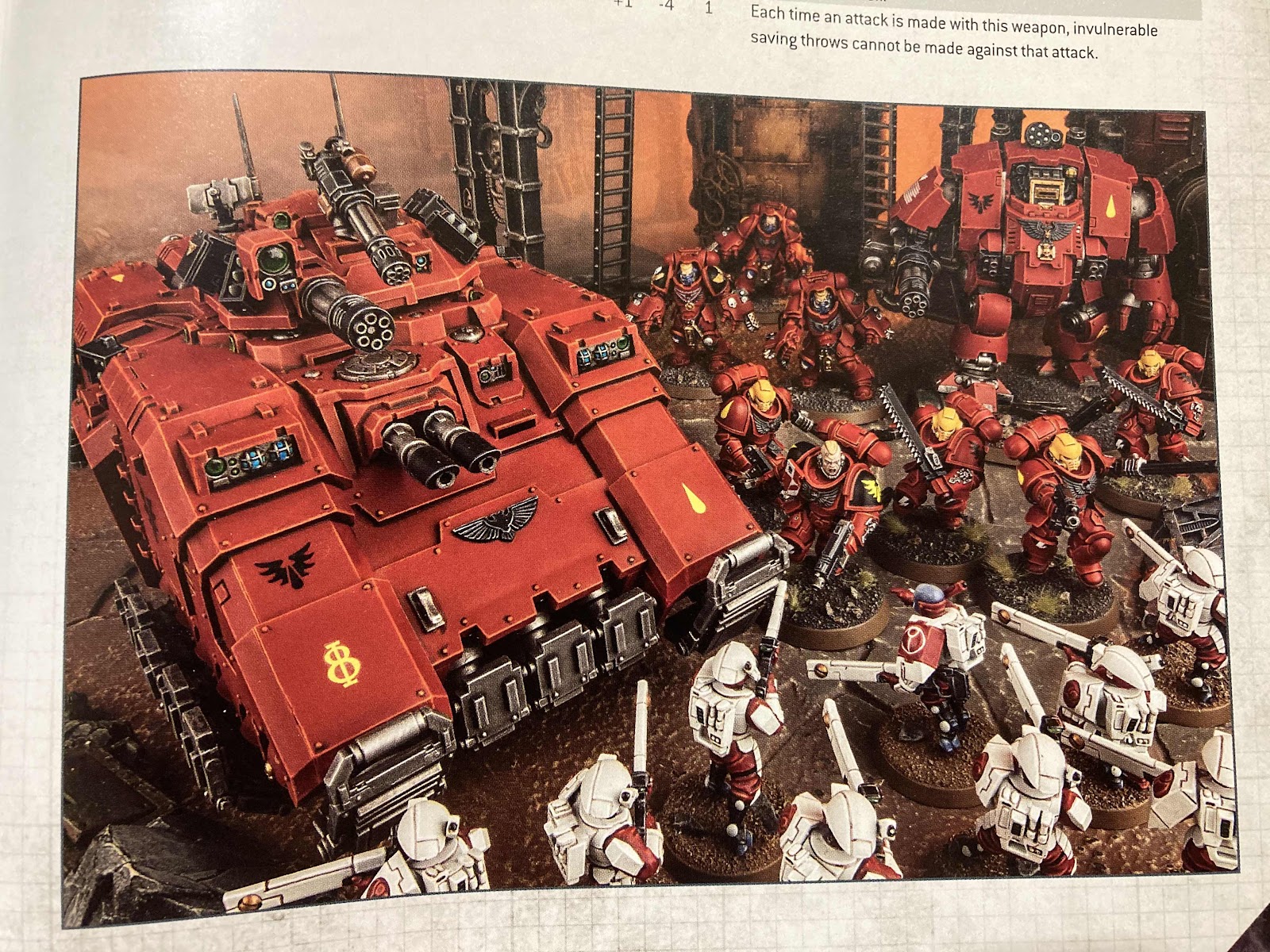 There is the usual warlord traits and relics you would expect in a codex now but one thing I think deserves special mention is the stratagems. This is an area of the game I have really not enjoyed because I find that there are so many and they are rather situational and hard to navigate to the point that by the time the situation is over you are like...’yeah, I could have used XXXX stratagem there...’. Well this should happen no more as they are very well organised now and colour coded as to when they are able to be used. For gaming fossils and casual gamers, like me, this is fantastic news! 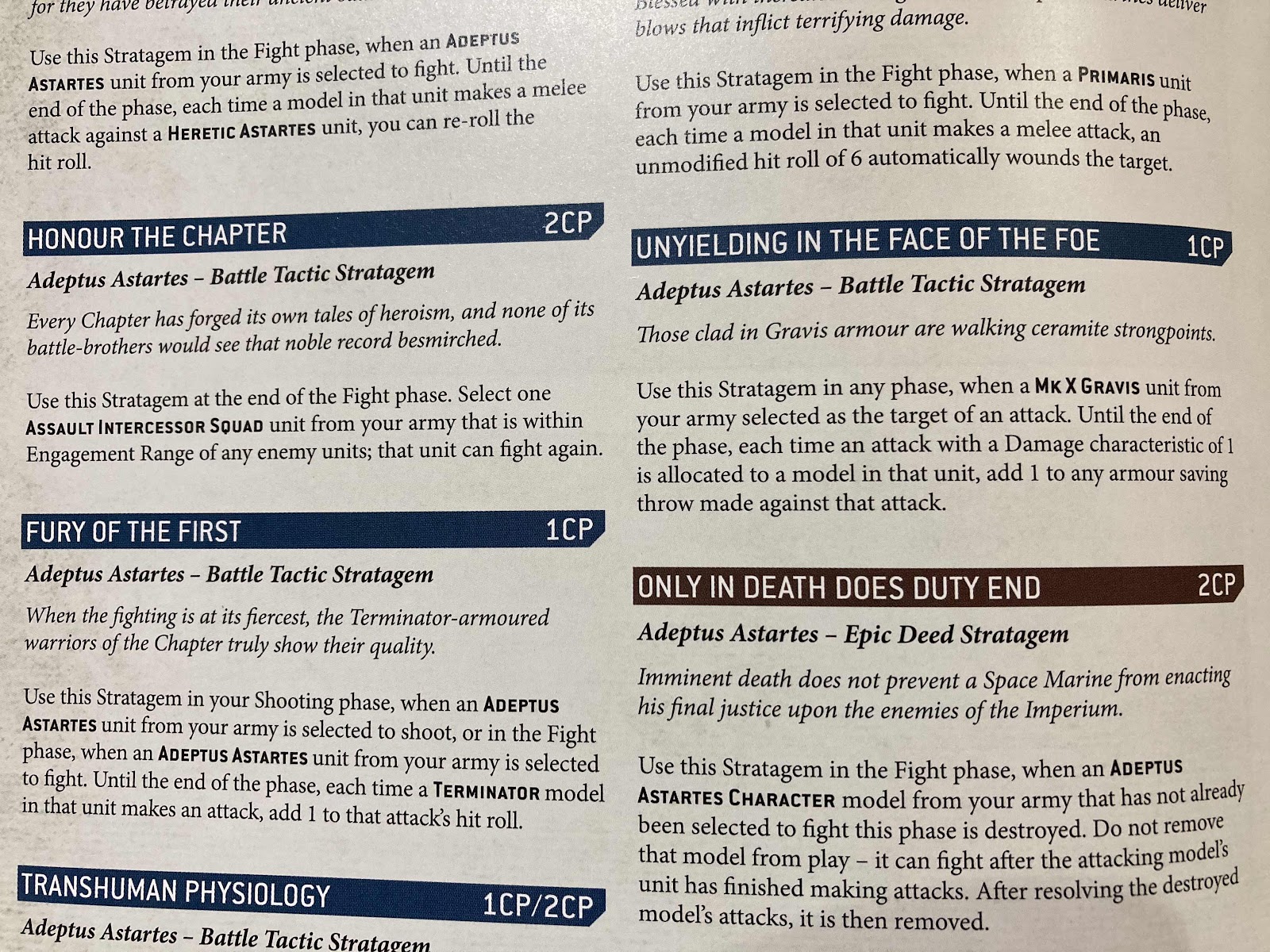 Let’s take a look at the models. I like a lot of the Primaris stuff but I am still of the era where the Imperium were on the back foot, so some of the newer design decisions are still not my cup of tea. I love the new tanks, all of them - I just wish they were tracked instead of hover. Now the only army that doesn’t have flying tanks is the imperial guard. For me, it just doesn’t feel like the old aesthetic. The new ATV is a particular low point in my opinion, but everything else is really cool. My favourite of the new models are the heavy intercessors which look amazing! 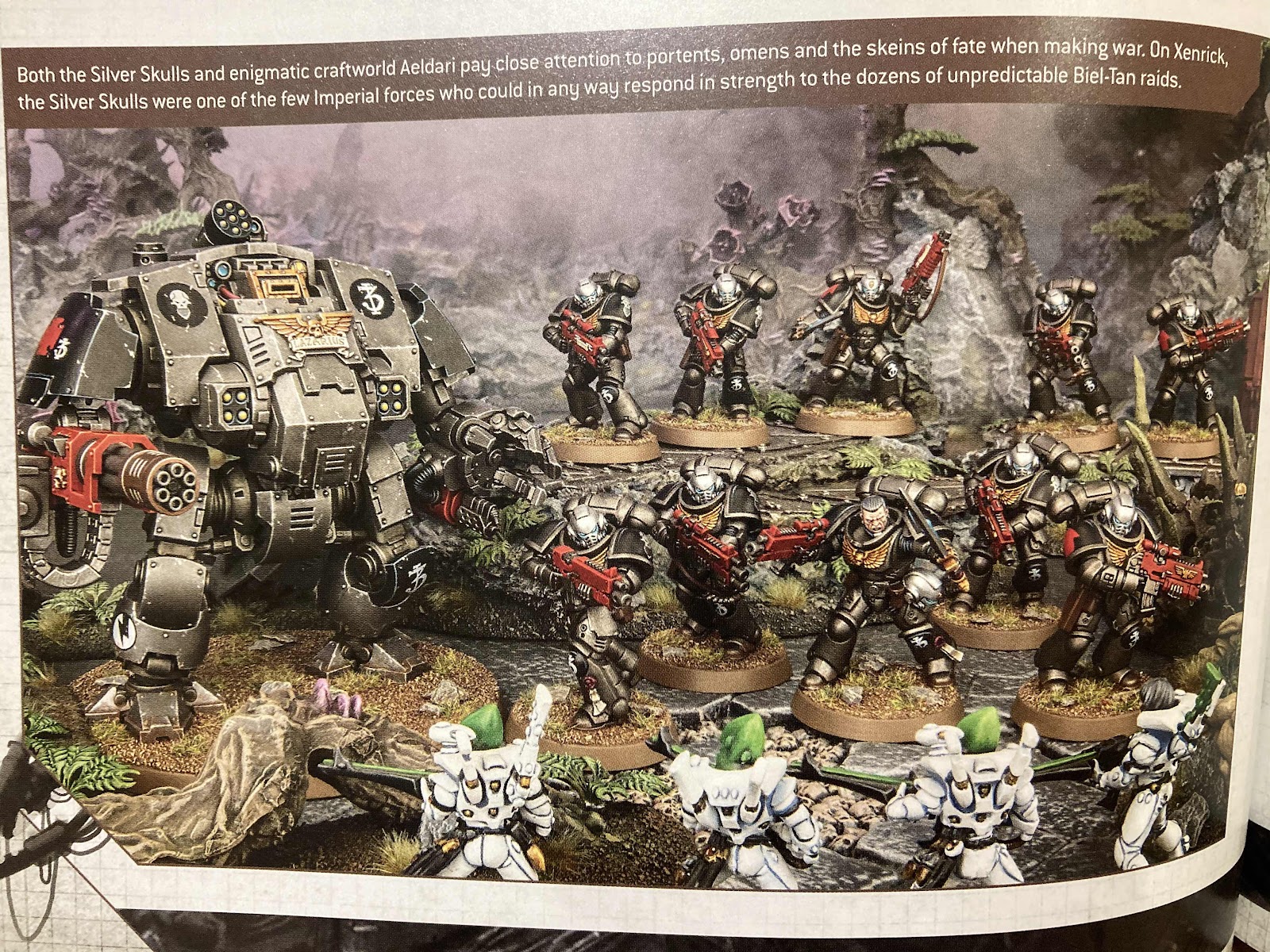 All in all I think it is a great release but I genuinely hope this is the end of generic marines for the time being the range is vast (I would go as far as saying it is actually too big) and there are now too many units all doing the same thing to the point that even some of the newer models feel redundant. I think some chapter specific units and characters would be great and more loyalist Primarch’s returning would be very welcome (although Guilliman needs fixing compared to Ghaz and all the Necron shards). It’s not that Guilliman is rubbish it’s that normal captains have now become so powerful that a Primarch doesn’t feel special. Maybe this is the intention by GW to kind of almost kill off a lot of the old lore by making it obsolete. Who knows? 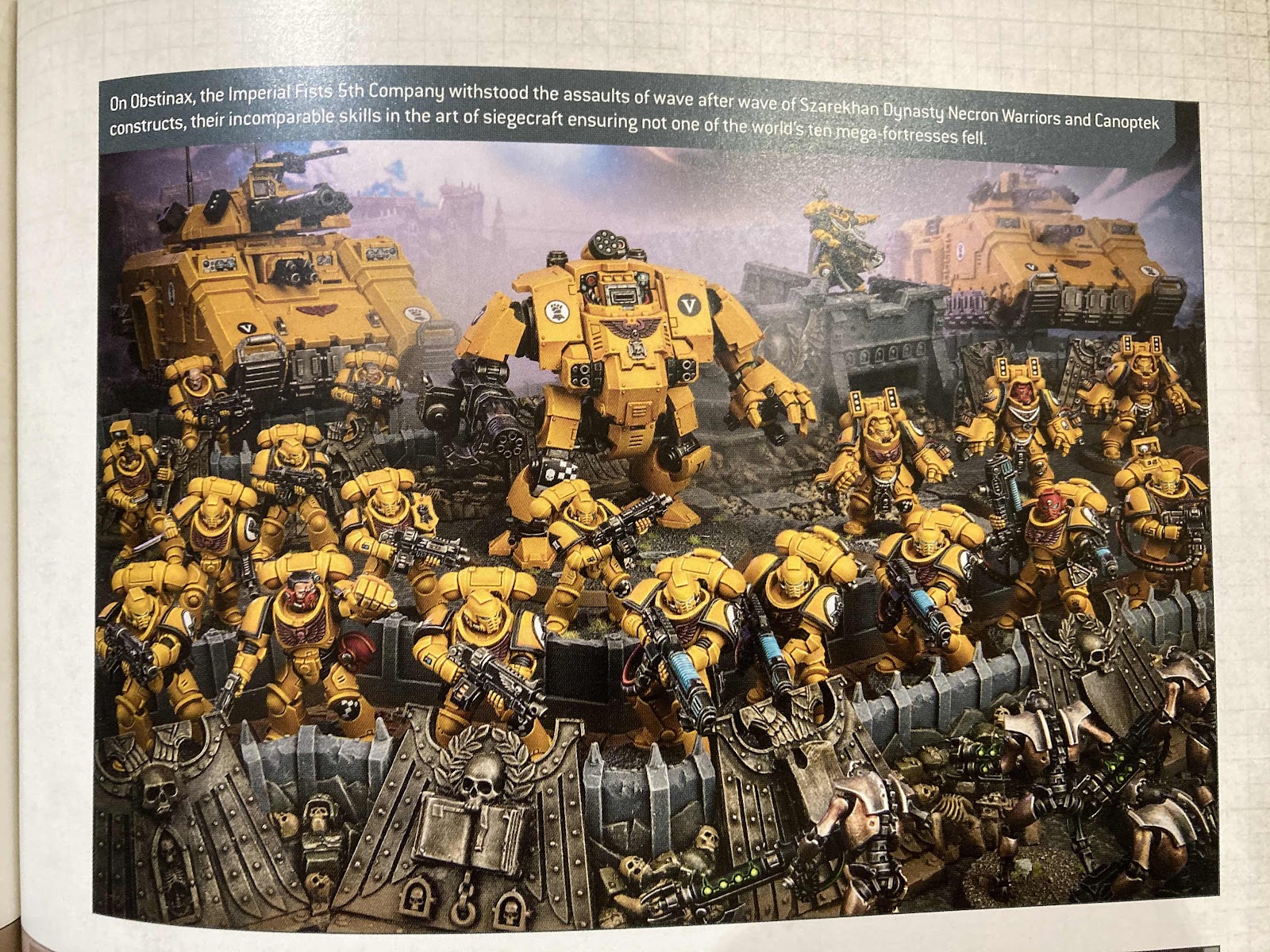 Anyway, thanks for reading and I hope to see you soon!