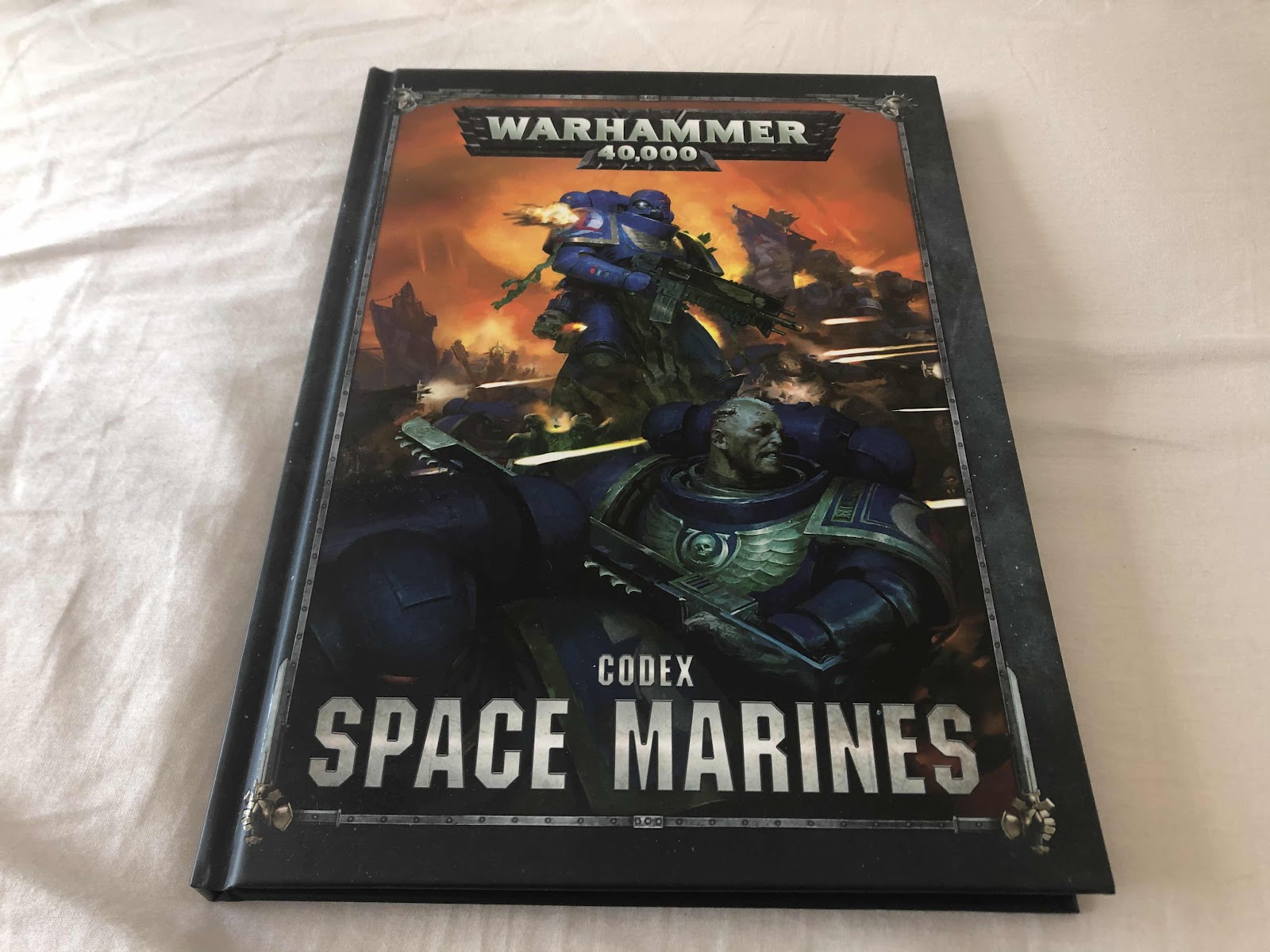 Today we are looking at the new Space Marine Codex! This is a big, meaty book with loads of great features that is a must-buy for any marine players. It seems to be an evolution of the codex with some of the new features, such as the create a chapter section – more about this later.

Alongside the Codex, 6 supplements were tentatively announced which will be a wonderful addition to the standard tome, introducing chapter specific characters and rules etc – which is a deviation from previous editions where the Space Marine Codex used to house all of these.

I guess this kind of brings me to my first criticism, which should probably be more directed toward the supplements than the Codex but here it is – to play an Ultramarine, Raven Guard, Iron Hand etc chapter, you now need at least 2 books to field them. Then if you want to bring in Vigilus formations that’s another book, then around Christmas time there will be Chapter Approved 2019 and then you have the rules…it just goes on and on. By the end of the year that will be 5 books, adding up to over £100 in value, just to play with your army. It is a wee bit too much and I really hope this is addressed in the future. For me, they should have just added the communal datasheets into the supplements and charged a bit more.

My 2nd criticism is one of conjecture really. To me, it is fairly obvious that the Primaris Marines are going to be a long-term replacement for the squat marines – which I am actually 100% fine with (have you put and old marine next to a Tempestus Scion? The fabled ‘superhuman’ Space Marine really doesn’t come across). To this end I believe it is not a good time to start a Marine army as the range is just not fleshed out enough. There are no real close combat units, the bikes are old enough to vote, the old tanks can’t be used with the new marines – more on this in my last criticism – and a plethora of other reasons. The range simply isn’t there yet. You have variations of Reivers which do basically the same thing – a movement gimmick and close-quarter gunfighting. What is the point? Why not have a chainsword and heavy bolt pistol version too?

This leads me to my final criticism, where is my grim dark? I have always loved the lost technology fluff of mankind, where Xenos would have flying tanks that could out manoeuvre the outdated tech of the Imperium. Now there are more armies with flying tanks than those without! Tank battles have turned into a game of leapfrog where cover or hull down doesn’t even matter anymore. The only army that still solely has tracked tanks is the Imperial Guard, but I bet this will change in the next update. The Rhino is going to go the way of the Dodo and I for one am very sad. But if you compare it to the new Impulsor (5pts extra bade cost) there is no competition: 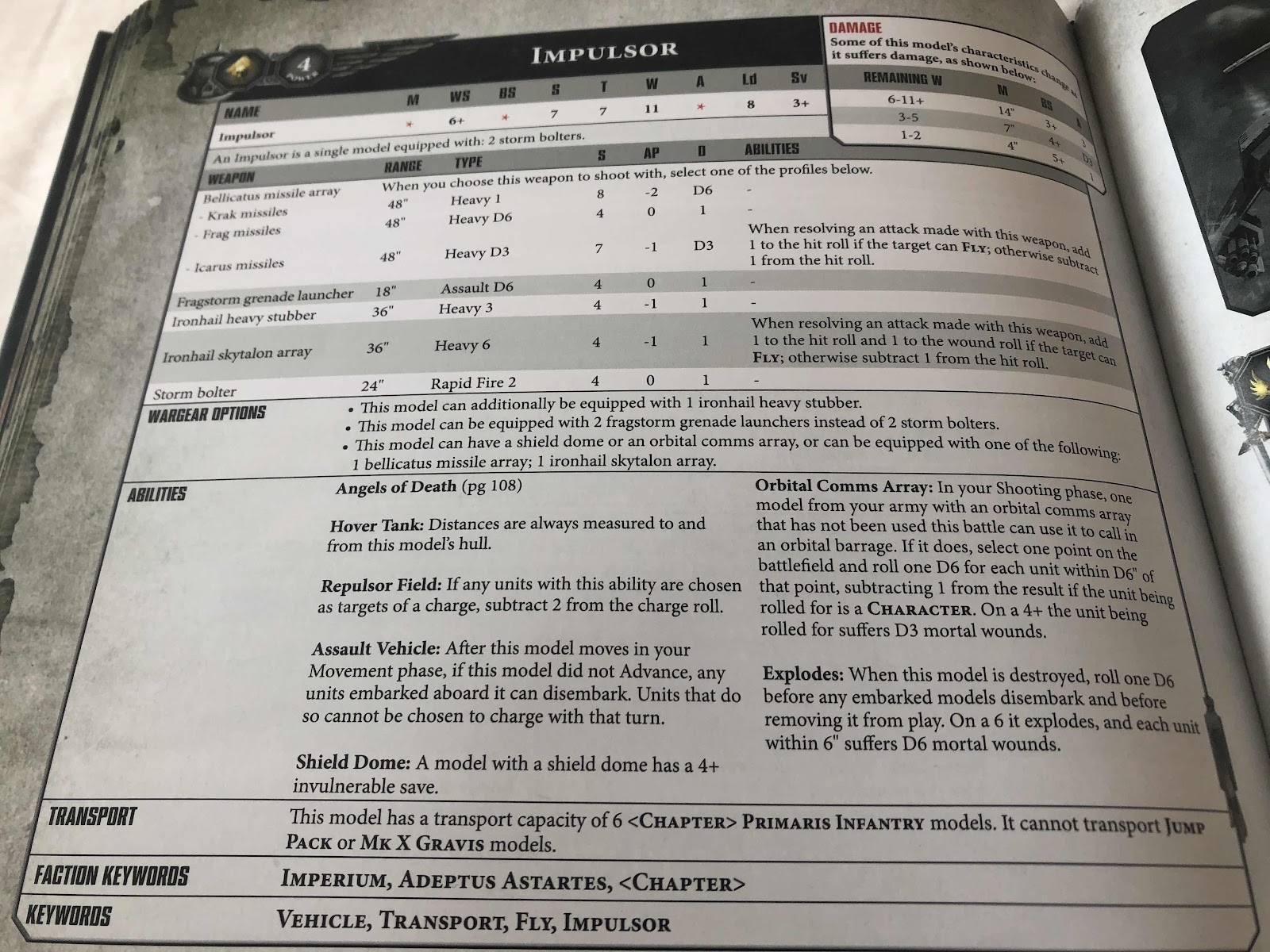 I guess now is a good time to mention Terminators too…I love terminators and Space Hulk, always have, but with the birth of primaris we risk the very real possibility of saying goodbye to these mainstays of the 40K battlefields and it isn’t just them. Land Raiders, Rhinos and Razorbacks can’t be used by Primaris and so with death of squat marines I fear it is the death knell for our tracked beauties. We have jetpack heavies now, where do devastators fit in? Maybe I am stuck in the past? Maybe I don’t like change? Or maybe myself and some of the aging community who loved the old aesthetic have been betrayed so that kids can enjoy the ‘rule of cool’? 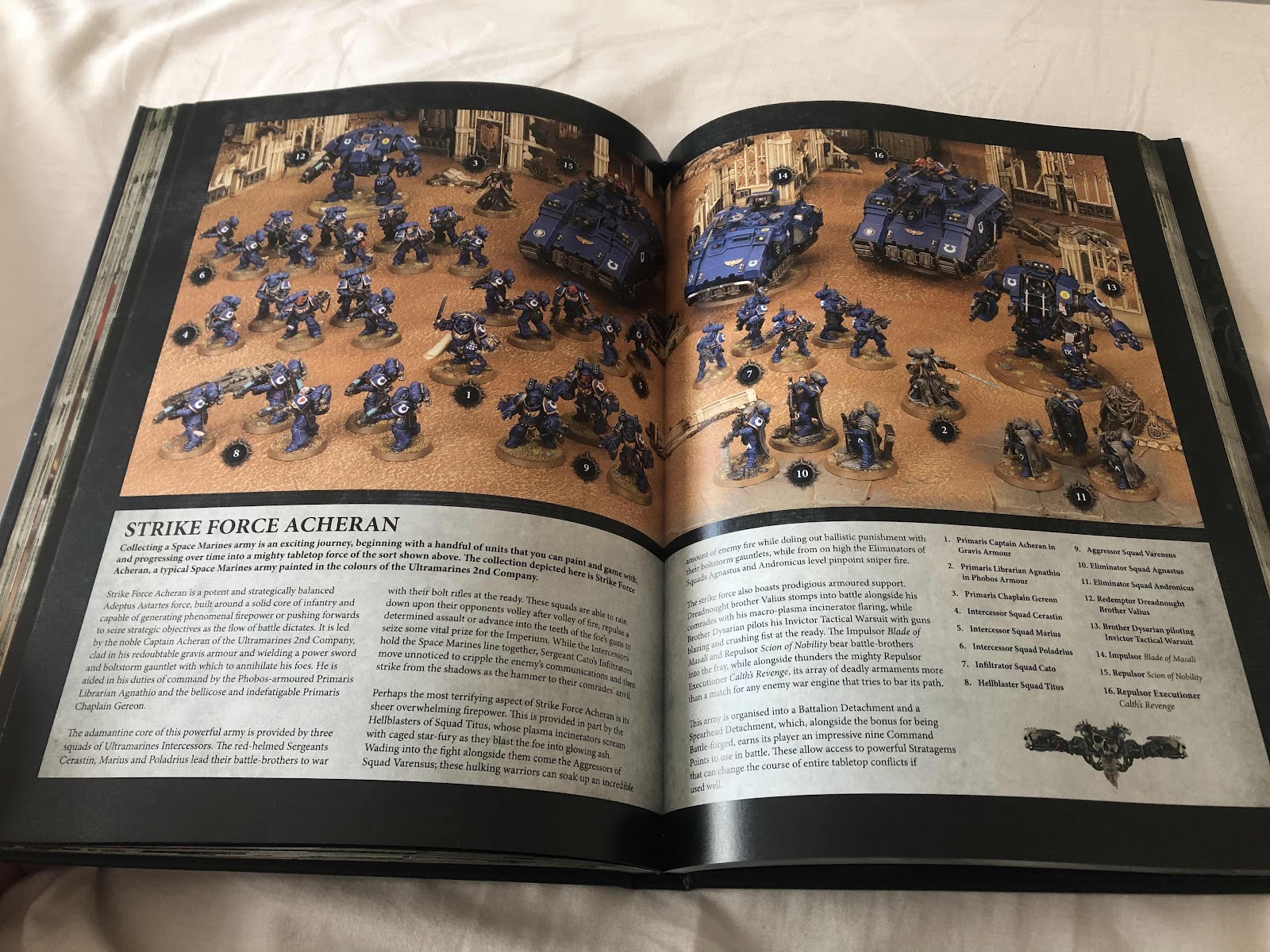 Regardless, these are fairly minor criticisms so lets look at my top 5 favourite things in the Codex!

1. The ability to create your own chapter is something that has always been around, but now you can do it officially and mix rules to create a unique playing style! If you want to create a close-combat force which is hard hitting and can cause major damage on the charge, there are multiple combinations you can put together (I won’t list them here as I believe it will breach copyright rules). There are around 20 different traits that you can give to your chapter so there really is an option for anyone. Once the blog’s painting competition is over on the 01/11/2019 I will do a series of articles charting the creation of my own chapter. 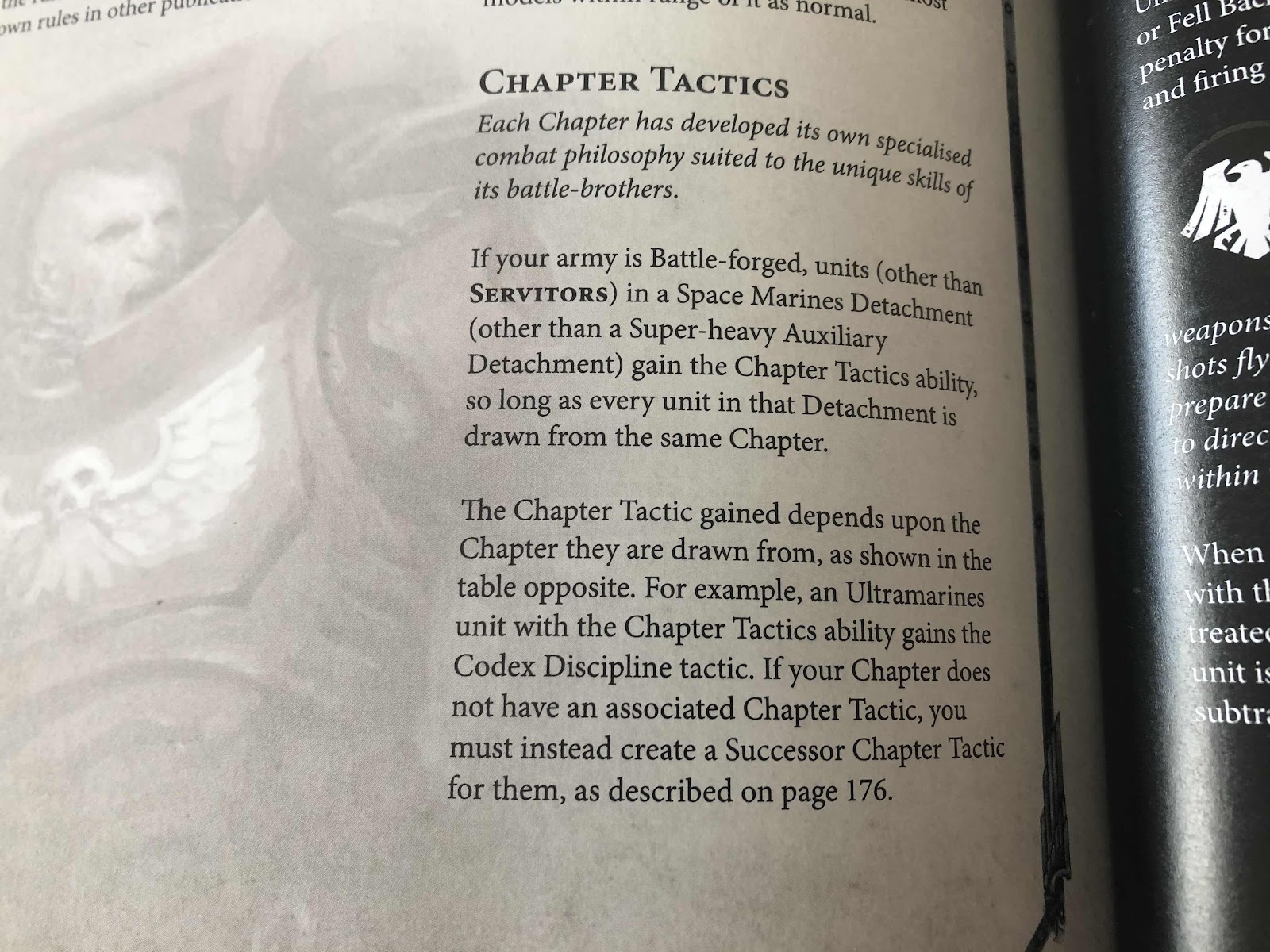 2. The improvements to some units are a nice addition and Aggressors are a major winner in the new Codex, boasting an extra wound and an extra attack – making them more survivable and a wee bit punchier in combat. When boosted by the tactical doctrine – touched on a bit later – their ranged abilities are also buffed to high levels. Auto bolt rifles also gained an extra shot making them a very nice option for Intercessors, firing 3 shots at 24” for a 1pt tax. Neat stuff! 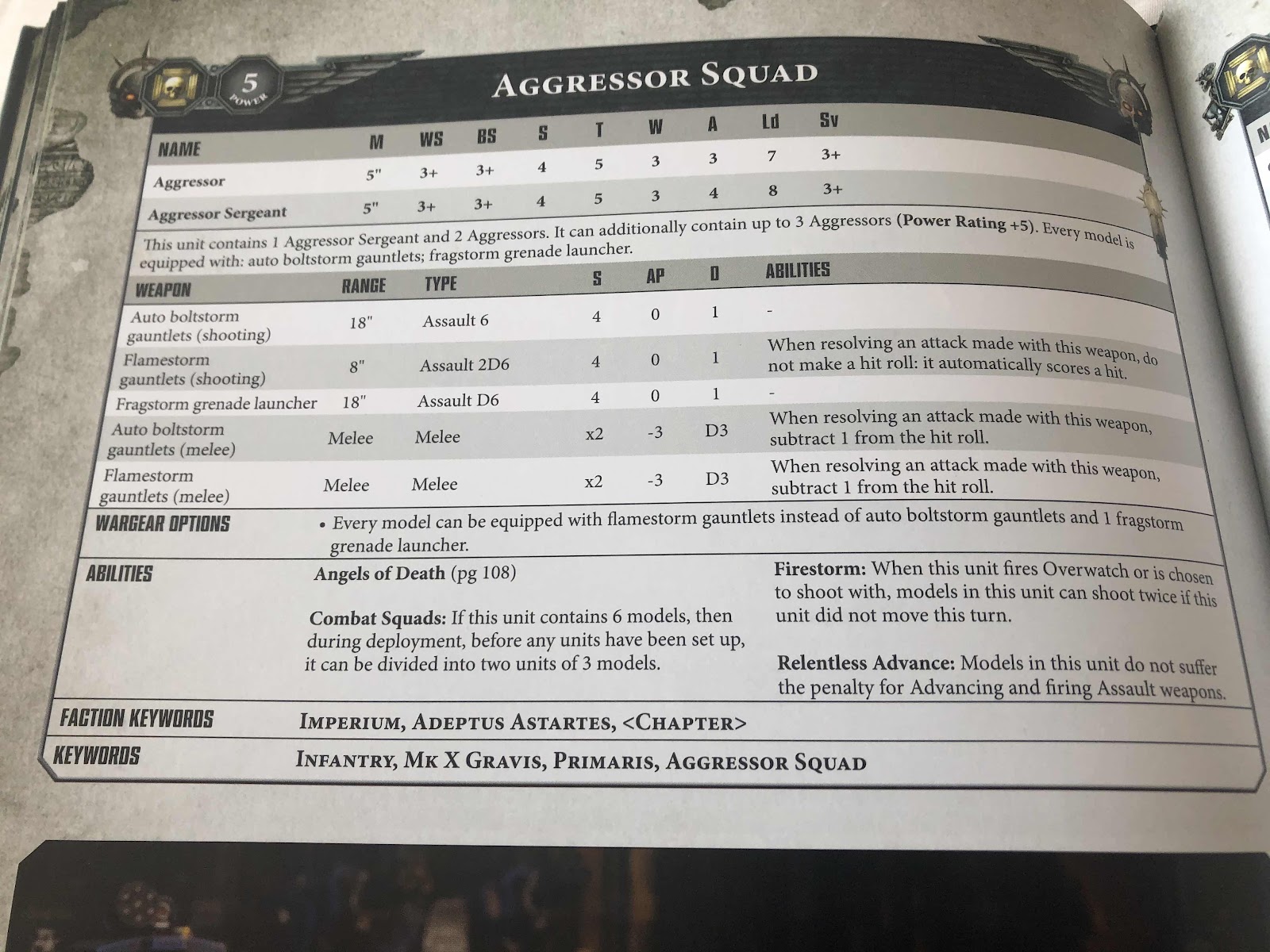 3. Another really nice change is the addition of litanies for Chaplains. These are activated at the start of each battle round on a 3+. They know the Litany of Hate and then can choose a further one from a set of six. Ranging from a feel no pain style of rule against mortal wounds to adding 1 to hit rolls made with ranged weapons, these litanies are very useful and, though not game breaking, could really assist an army when their back is against the wall. 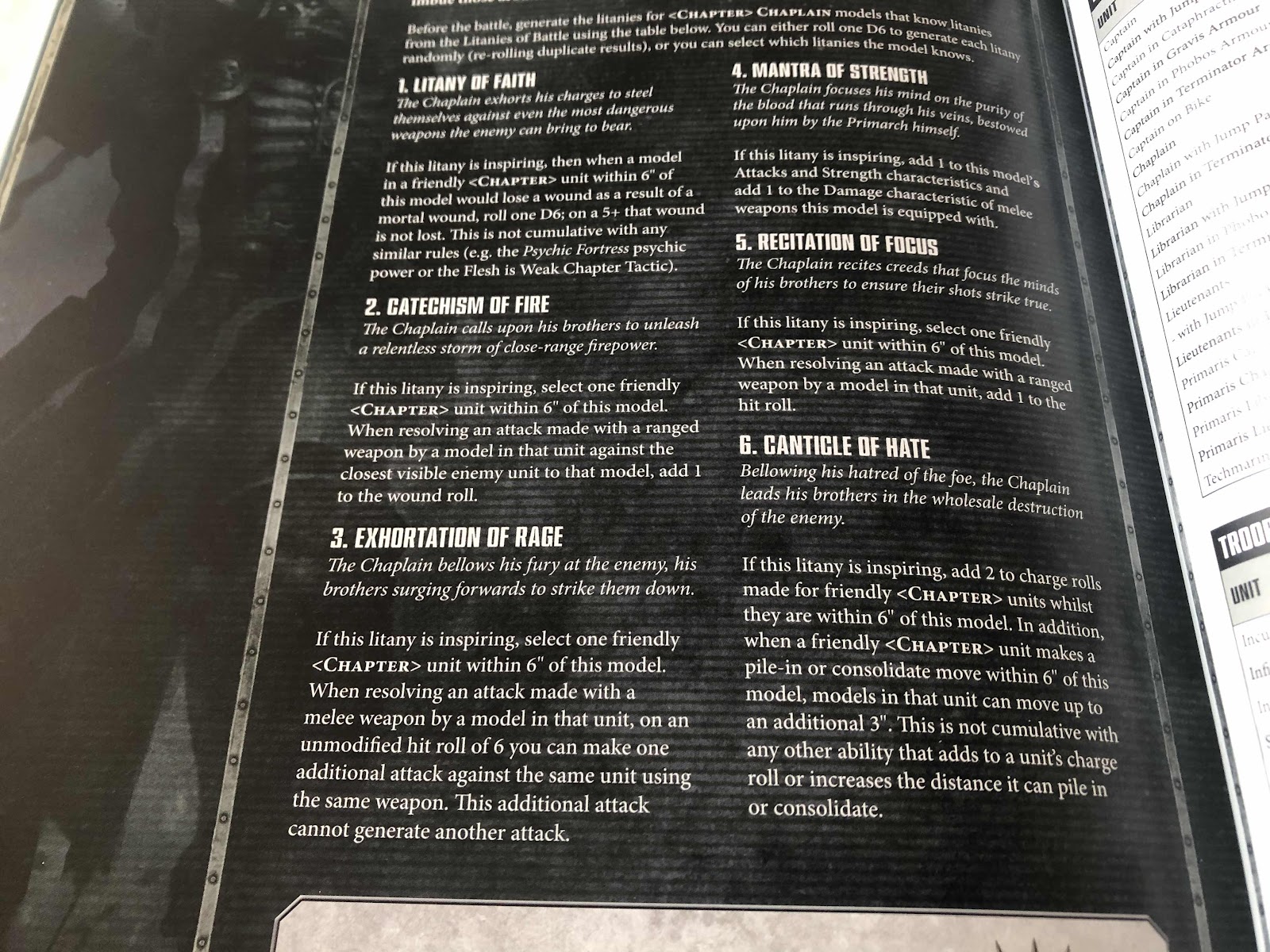 4. Something I have briefly touched on already is the tactical doctrines. These are army-wide special rules which you can cycle through as the battle progresses. As the game starts, space marines will be in the Devastator Doctrine, which improves the AP of Heavy and Grenade weapons by one. You can choose to switch to the Tactical Doctrine at the start of the second battle round onwards – improving the AP of rapid fire and assault weapons by one - before finally choosing to switch to the Assault Doctrine in any proceeding battle round, improving the AP of melee and pistol weapons by 1. However, once you have changed the doctrine you cannot go back to a previous one. I really like this mechanic and I feel that it makes it feel like the battle is evolving around you and allows for you to shift the momentum through different unit types. Very tactical and very interesting. 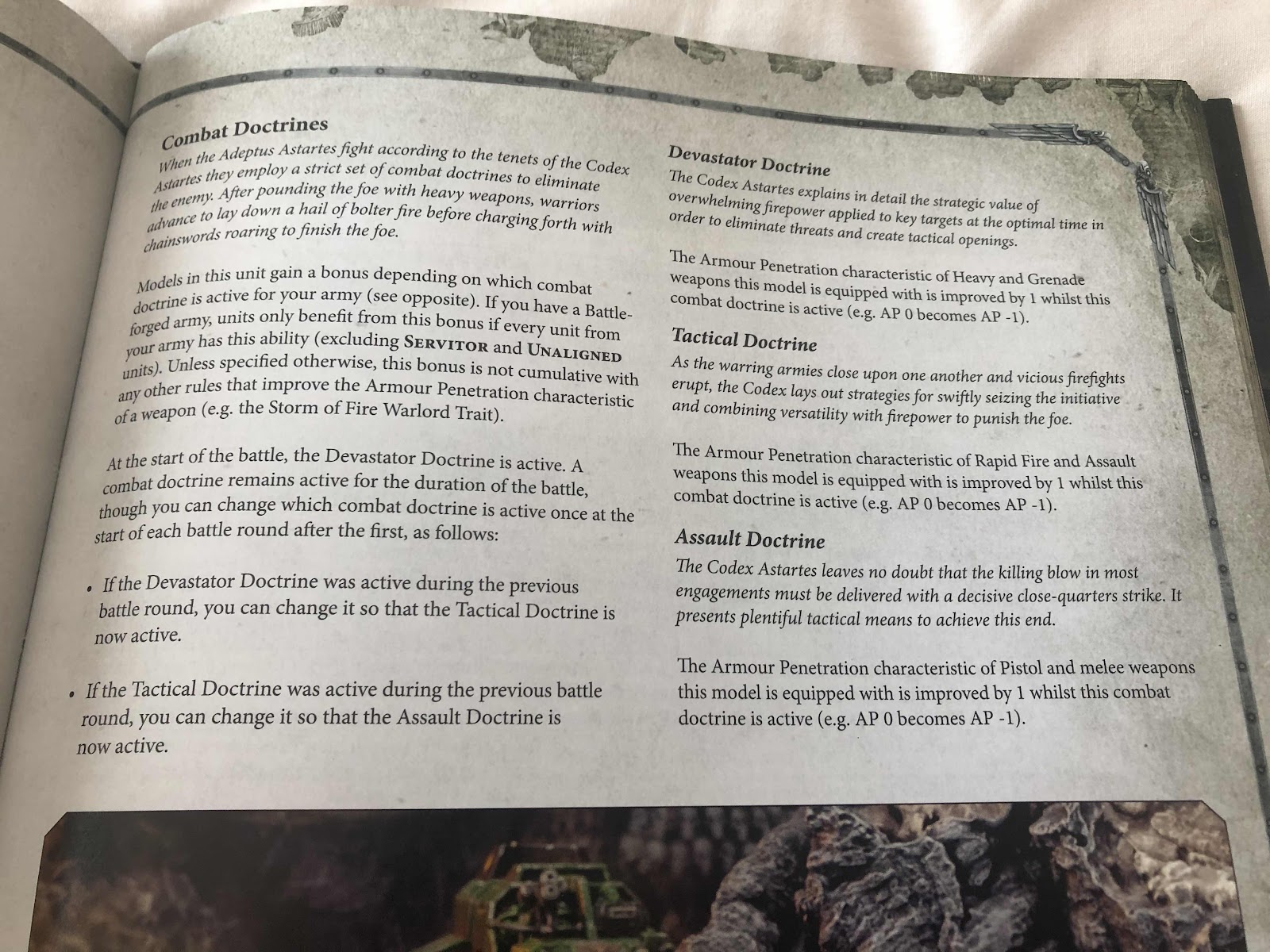 5. My final favourite part of the codex is the fluff. Although it doesn’t go into any of it in massive depth, there is enough for it to be interesting. The Codex shows the structure of companies and chapters as well as discussing markings and the brief various background of a lot of chapters. It also fleshes out the Ultima Founding, highlighting why they have included a make your own successor section. 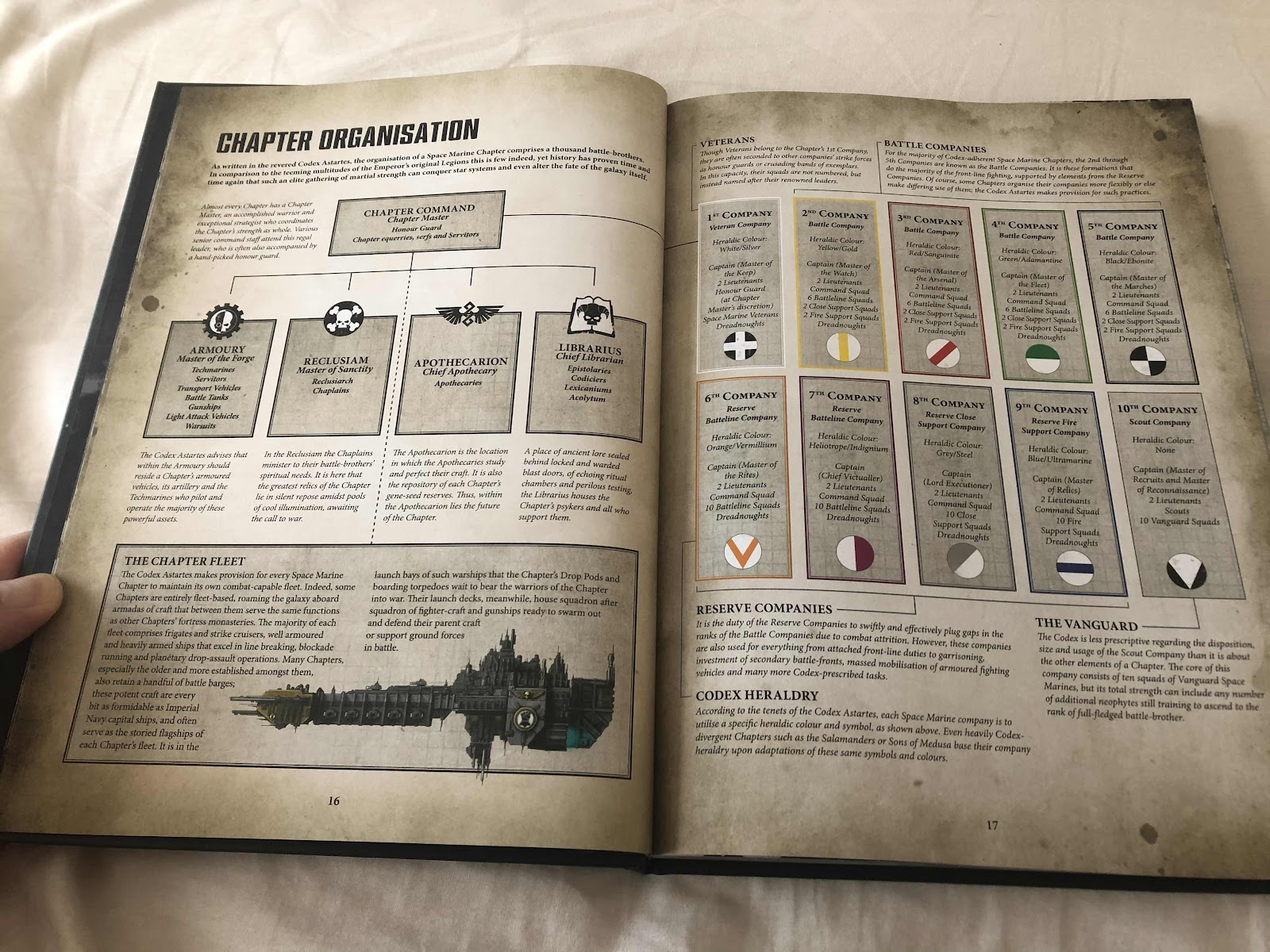 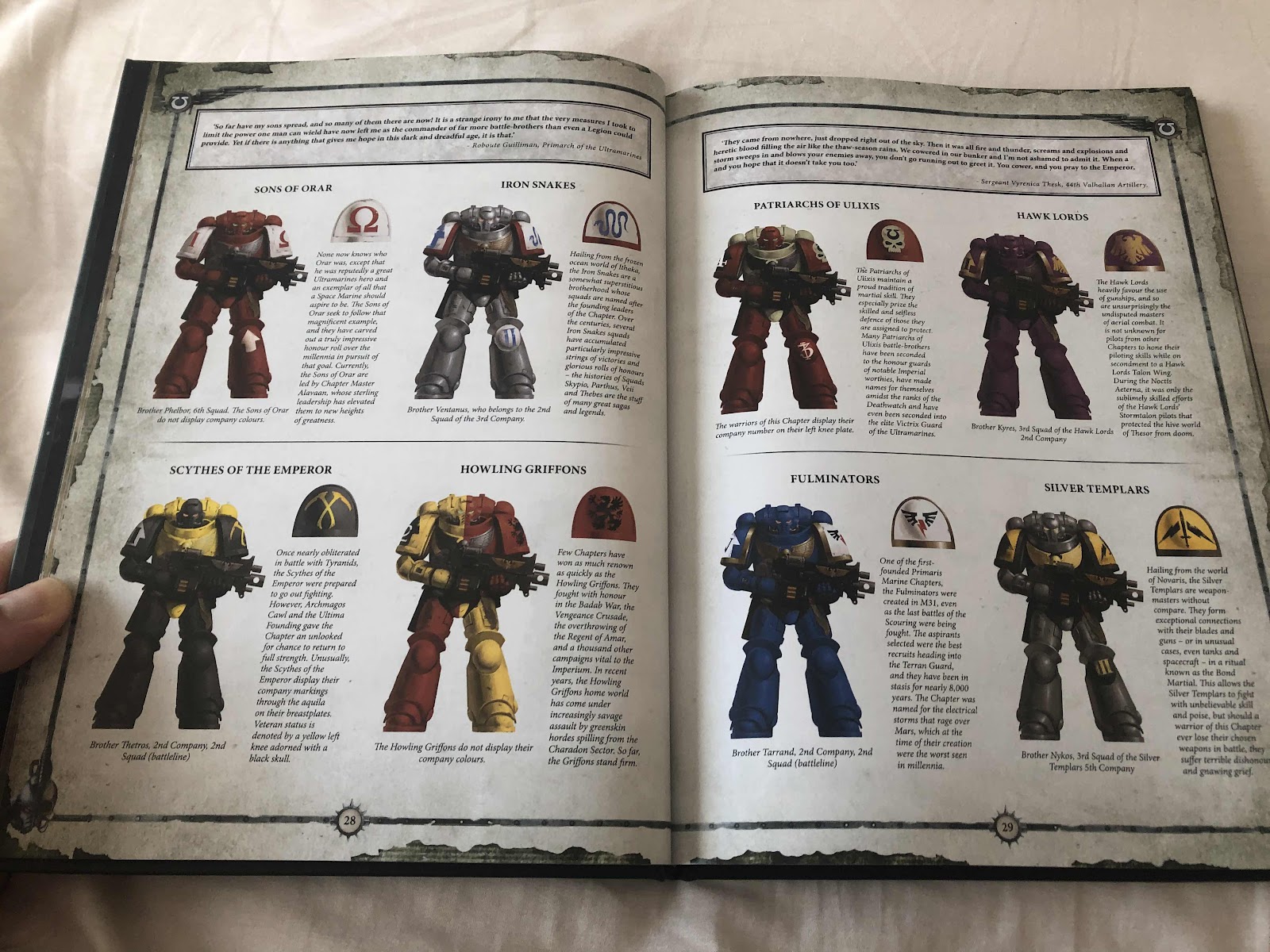 My final thoughts are that the Codex is great from a narrative players perspective. I am not a tournament player so I would struggle to tell you how powerful the army will be or what combo’s will be nasty, but I can honestly say that it is an army that sounds like a lot of fun to play with. I am looking forward to making my own Ultramarine successor over the next few months. Something Knightly lol…

I do also feel that with this Codex and the supplements it is a bit of a missed opportunity to not bring back another loyal Primarch but I will discuss this in an article about the supplements. 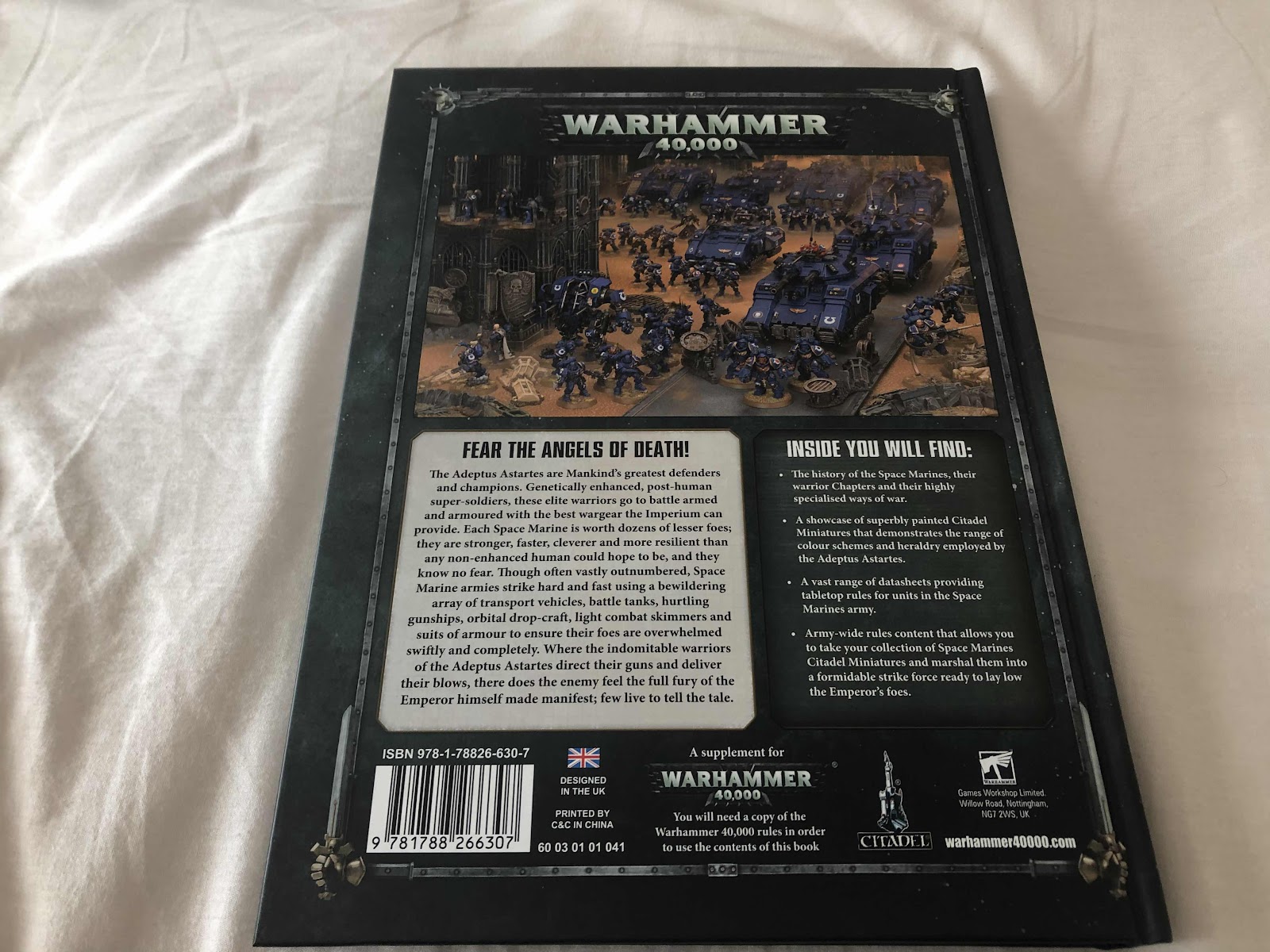 Thanks for reading my review, I hope you have enjoyed it. Please leave a comment or send me an email if you have any questions.