Hello everyone,
We’ve been lucky enough to have the new Chapter Approved books sent to us by Games Workshop!
So I’ll be doing a review of both the new mission pack and the updated points values.
First of all I am of the opinion that these books should be digital and therefore free of charge as they are essentially a patch for the game.
At the very least the updated points should be free like the balance slate is, especially when these will fluctuate during the now seasons of the game.
I think going digital would also allow them to release up to date and precise points that reflect the armies current balance level. Working on balance six months in advance due to the book needing to be sent to the printers is a poor way of delivering game balance in my opinion.
However, it may be that the current situation with shipping around the world has forced their hand in getting it printed locally which would help with this issue.
On a positive note I am still very happy with their decision to do more regular updates to the game as game balance for me is very important and a great game will always attract more business for Games Workshop.
So let’s move on to the actual contents! 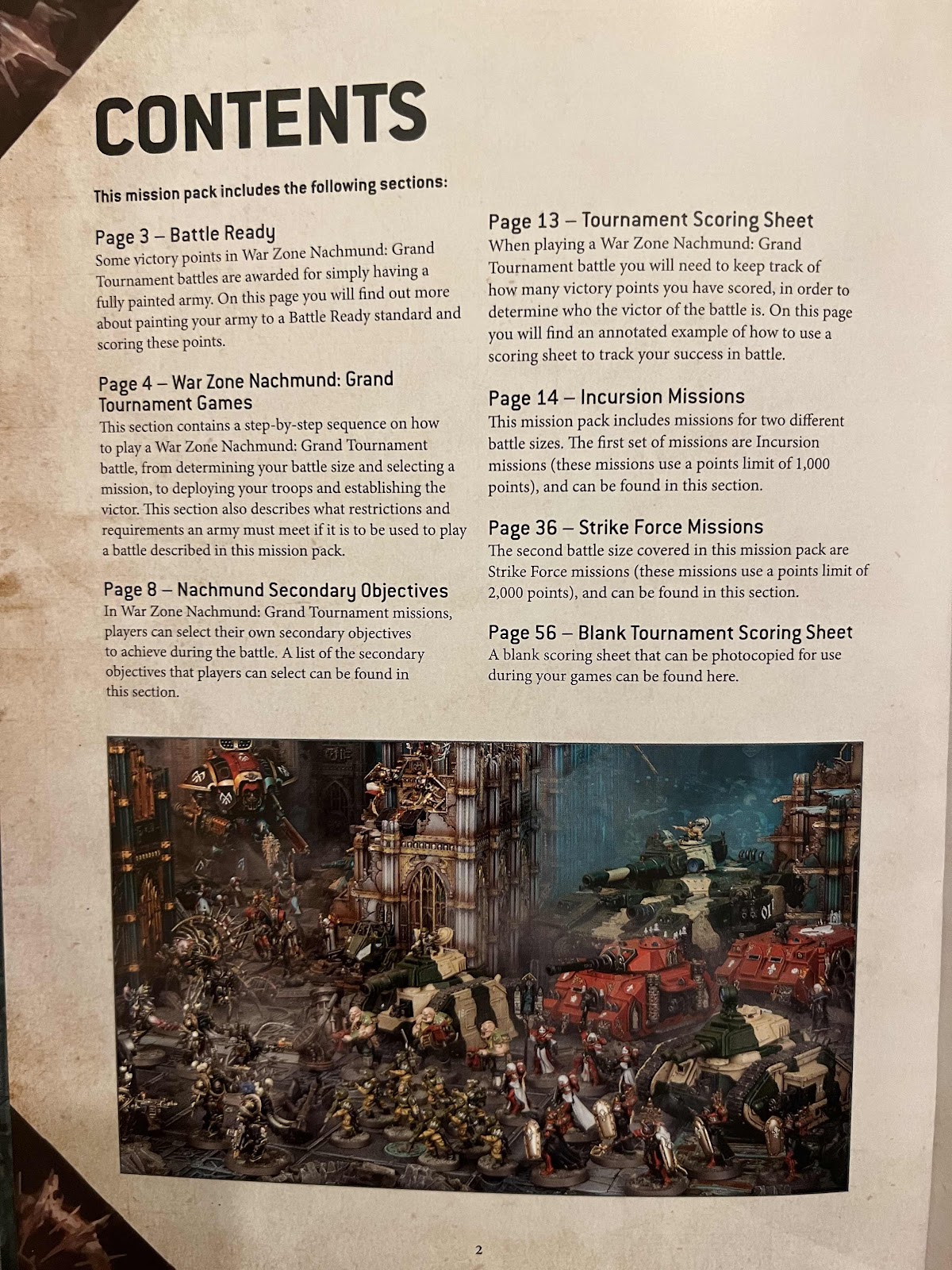 Matched Play
There is a very big change in direction in the new book which will effect both casual and competitive gamers. 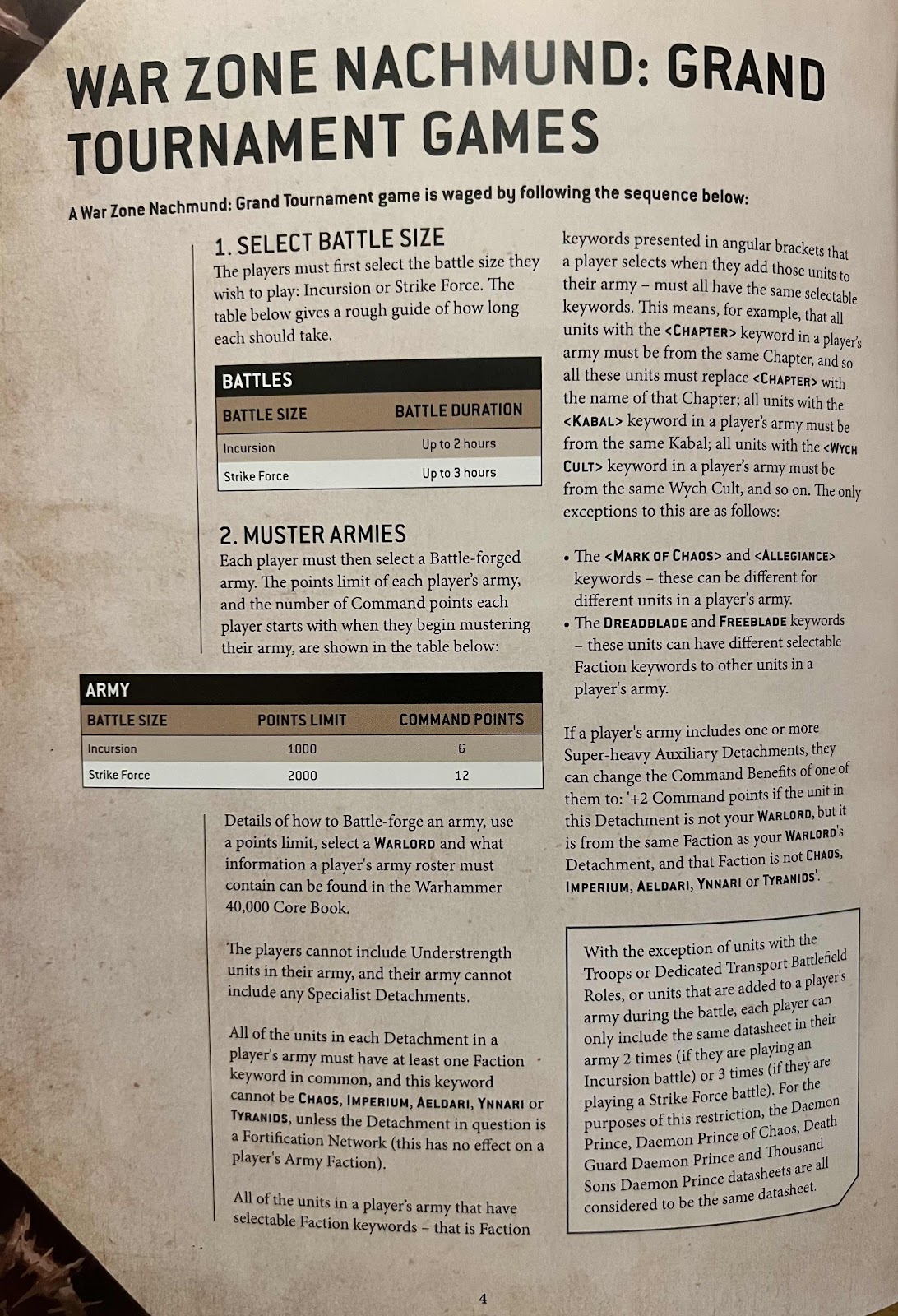 In my understanding the page above has now put a stop to the use of soup armies that include multiple sub-factions. This means taking two patrols for example will no longer allow you to take Bad Moons and Goffs in the same army.
This is a pretty huge change for the competitive scene as armies like Orks were using this to great effect. I was certainly someone looking at eventually including some Goffs or Death Skulls in my army.
The positives to this change are that it will certainly help the game developers improve the balance of the game. With less variables to consider in a faction, it’ll be easier to play test and improve the internal and external balance of a book.
The negatives are that it will no doubt quite significantly reduce the Orks effectiveness in games. Which is a shame as I think they were in great place overall.
The other downside from a hobby point of view is that I would have been very tempted to do a patrol of Goffs which is a small enough project for me to green light rather than starting an entirely new Ork army which now won’t happen.
The next big change is that armies can now only have three units with the same Datasheet in their army. This does exclude units with the troops or dedicated transport keywords. 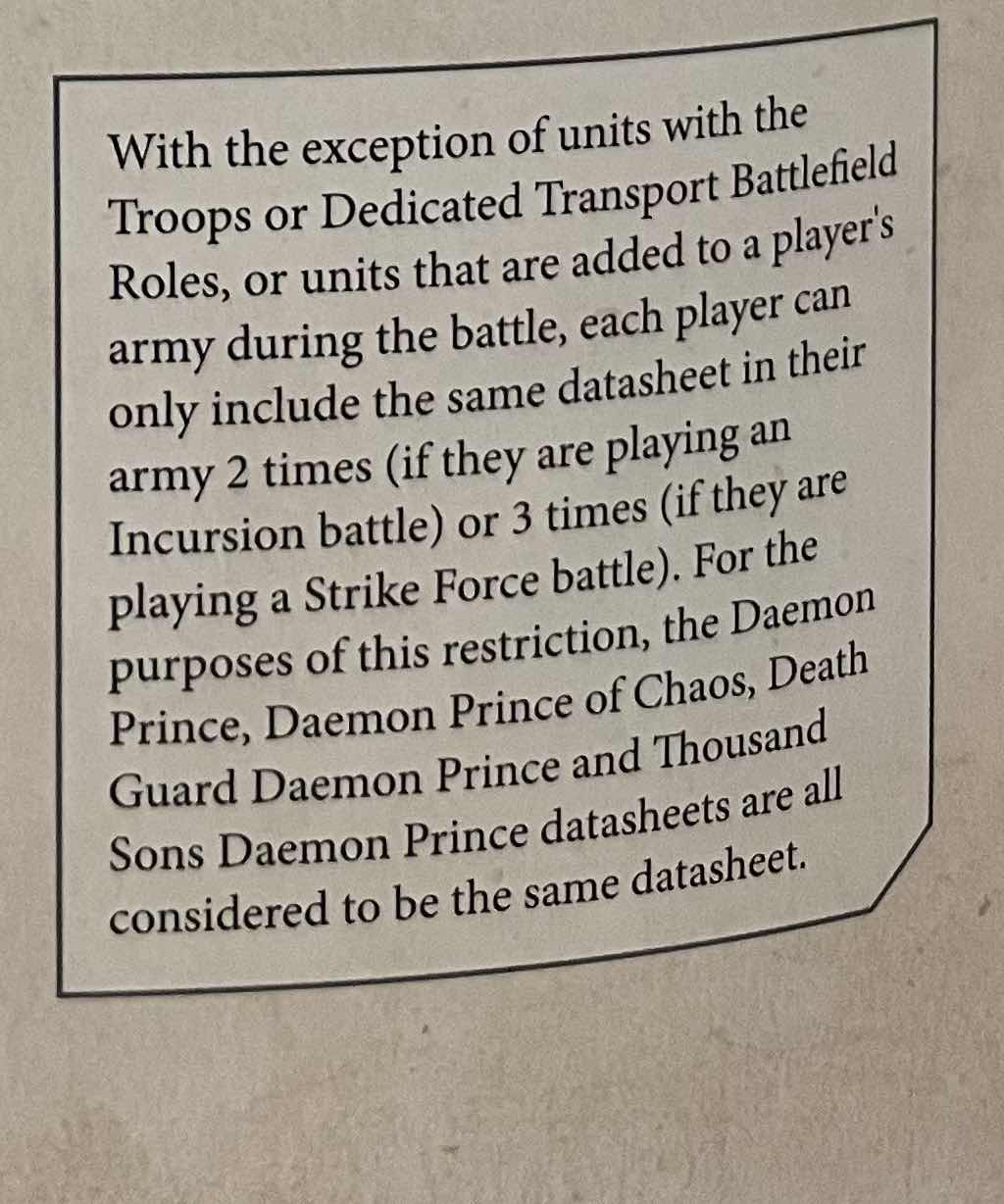 I think this is a great change as it will just somewhat limit people spamming one particularly powerful unit throughout their army. While allowing three of that unit will still give people enough freedom if they want a specific play style. I’d go as far as saying only two of the same unit would be a good thing too.
Nachmund Secondary Objectives
Now onto secondary objectives, there has been some changes here too. We now have more faction specific secondaries which could be quite impactful for some armies. The Ork specific secondaries aren’t good but hopefully it will be a different story for other factions.
You now also can’t take two faction specific secondaries, you can now only take one faction specific one and two from chapter approved. I think this is likely to only really effect space marines players though. It’s hard to say whether this is a good secondary or not for the Guard, it’s quite a big ask to destroy three units in a turn for any army consistently through out a game to earn 3 points per turn. Especially for guard where you may manage this in turns one or two whilst shooting. However, it is at the end of the battle round and not just your turn so you could still score unit kills in your opponents turn.
Overall though I’m not sure this will be taken by guard players, as you need an opponent with lots of small units to expect to achieve this without tabling your opponent but you could maybe get to 8 or 9 points so there is some potential there. 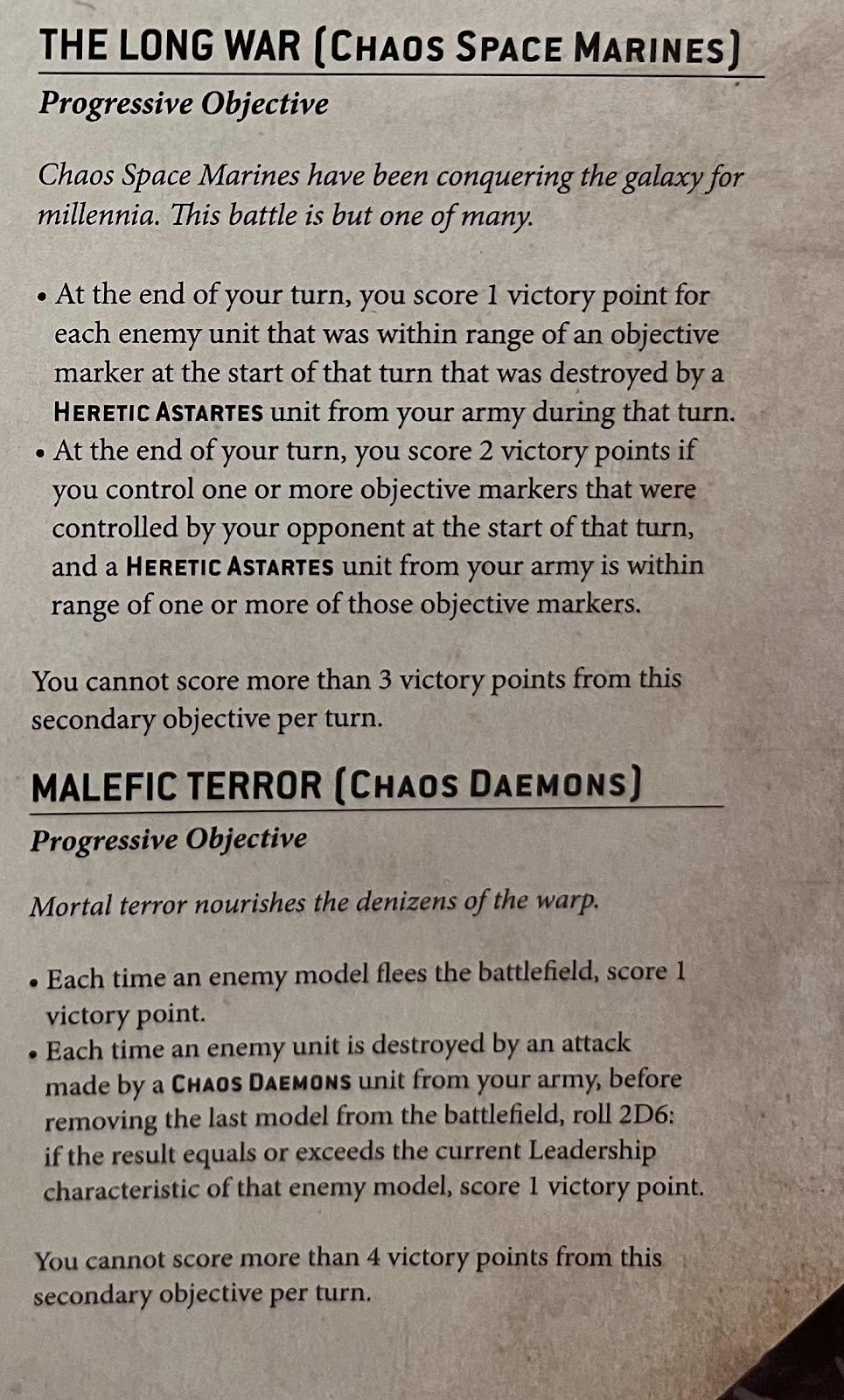 An interesting one for the Chaos Space Marines here. Destroying one unit that’s within range of an objective is doable for sure. However, taking one or more objectives from your opponent each turn could be difficult to achieve, as you’re relying on taking objectives from your opponent every turn to score.
So I think this is a fairly big ask compared to engage on all fronts or stranglehold where it’s a lot easier to score. It’s certainly possible though in the hands of a good player who can plan ahead and has the flexibility to take an objective each turn. 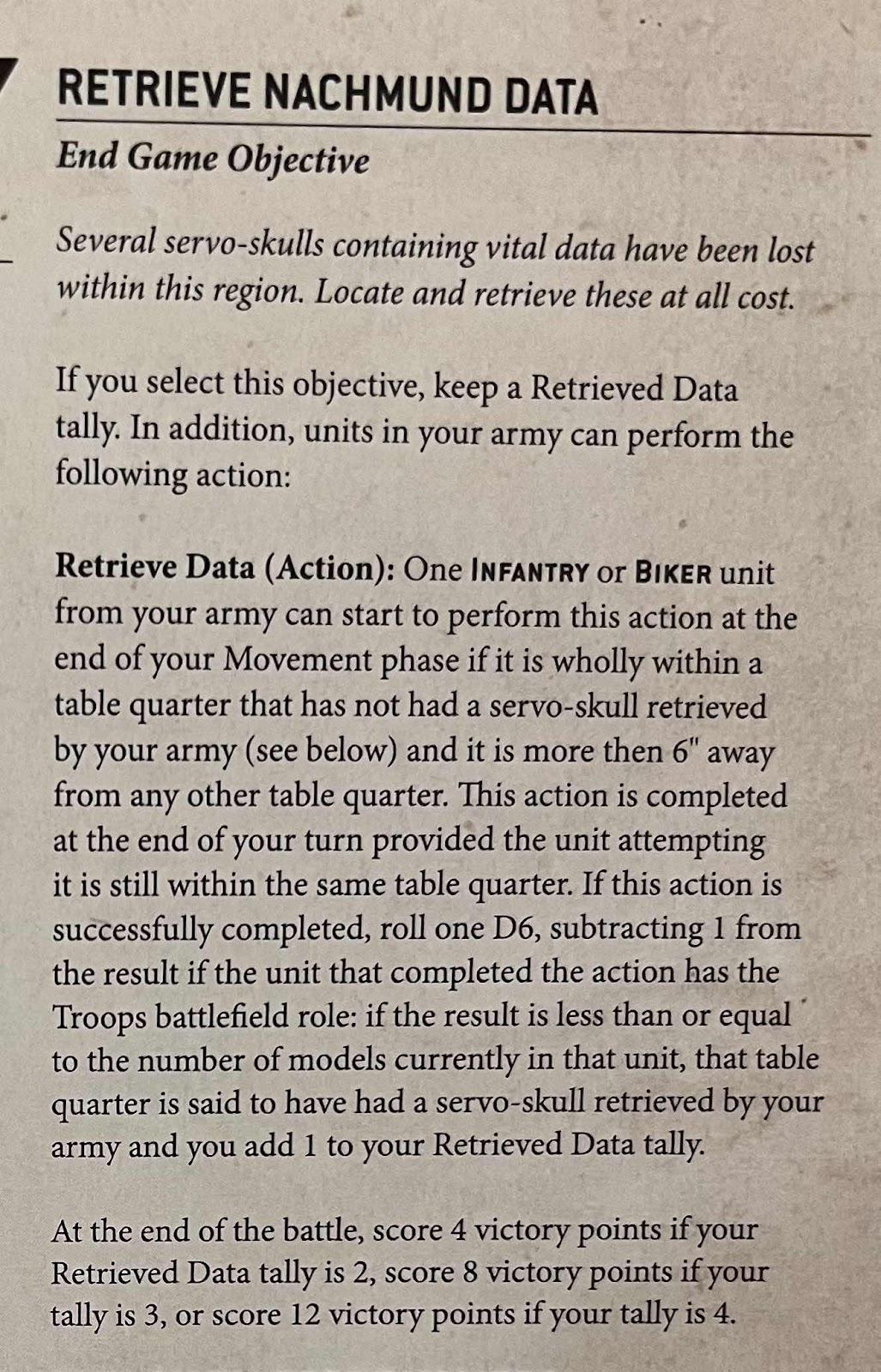 Probably more impactful is ROD or the new acronym being RND! Not quite as catchy for sure!
Now units that aren’t troops or are below 6 models are going to potentially suffer due to the roll that has to now take place.
It makes Stormboyz for Orks less effective as there’s a chance you won’t score if the unit is depleted. We may just see units of six from now on though.
I still think this is a great secondary though for most armies. It’s still the pick of the bunch with engage, stranglehold or assassinate for me.
However, there is a small change for engage now as it can only be achieved by a unit of 3 or more, a vehicle or a monster. So no more running a single character into a quarter for engage anymore!
Strike Force Missions
Incursion missions are in here too but I don’t play at 1000 points so I can’t say much on them!
There are nine strike force missions, two are already on the Warhammer Community site. There are some nice changes with the missions, as they are more dynamic and exciting. They’ve also changed the primary points to four which is good as it means you can’t max out after three turns, so you have to be thinking about holding the primary objectives over four or five turns. Which I think will also encourage more of a fight in games rather than hiding on objectives and doing secondaries.
Interesting rules on the mission below with regards to losing your CP bonus. I can’t really see many armies being affected by this in the first turn, but it’s something to think about. Especially as if you lose your warlord during the game you won’t get a CP each turn. 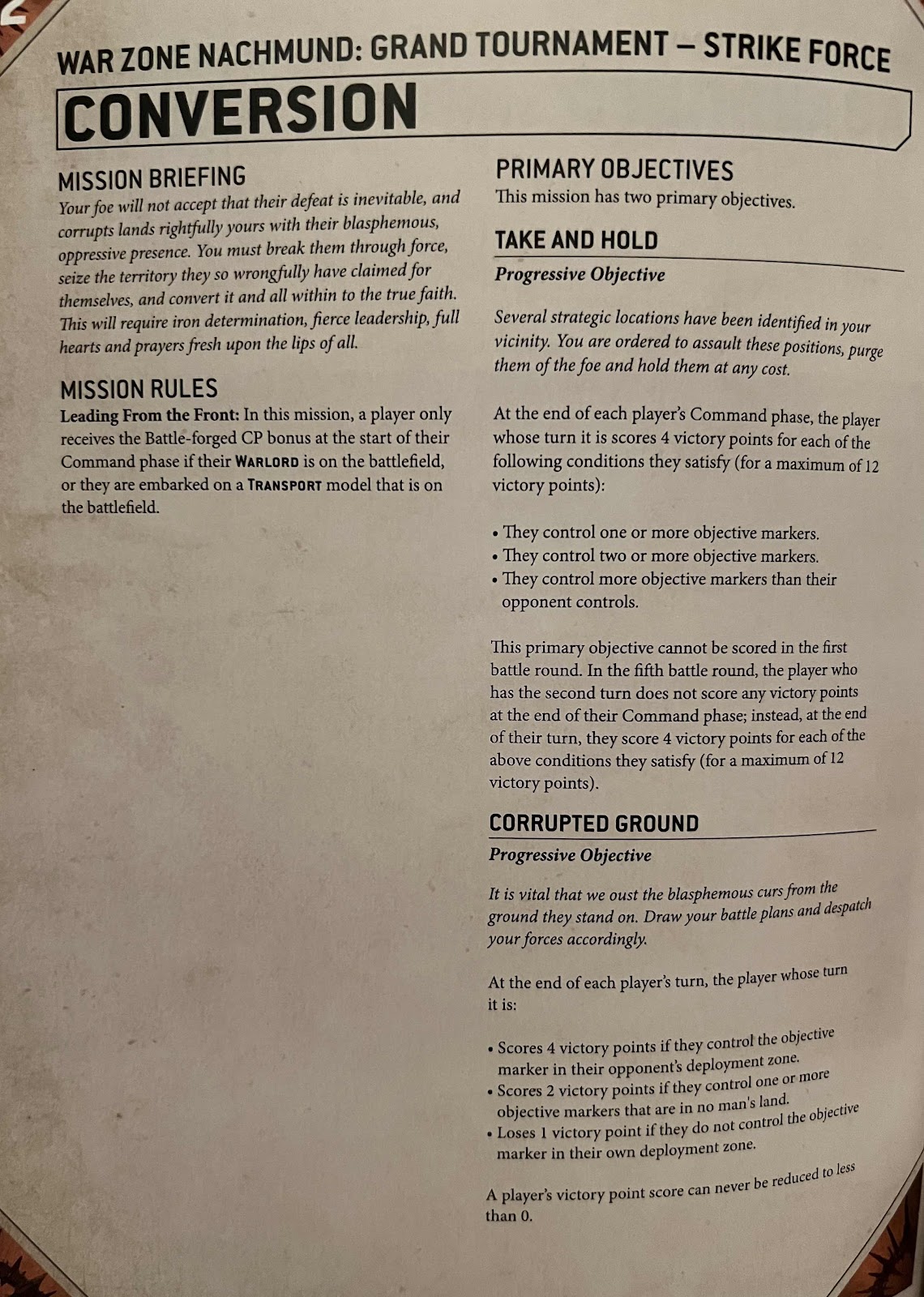 This is an interesting mission with two primary objectives and I really like the fact that you lose victory points if you don’t hold your own objectives in your deployment zone!
It should really put emphasis on holding your home objectives whilst also having units to go and stop your opponent holding theirs. It will be a five point swing if they don’t hold theirs, as you will then gain their primary points and they will lose a point too for losing their deployment zone objective.
The missions in general are very good and this one is quite an exciting challenge.
Points!
I’m usually very excited by points changes but I have to say there aren’t that many this time around which is a shame when there’s a clearly a lot of balancing to do within the game.
Let’s talk about some of the important changes. 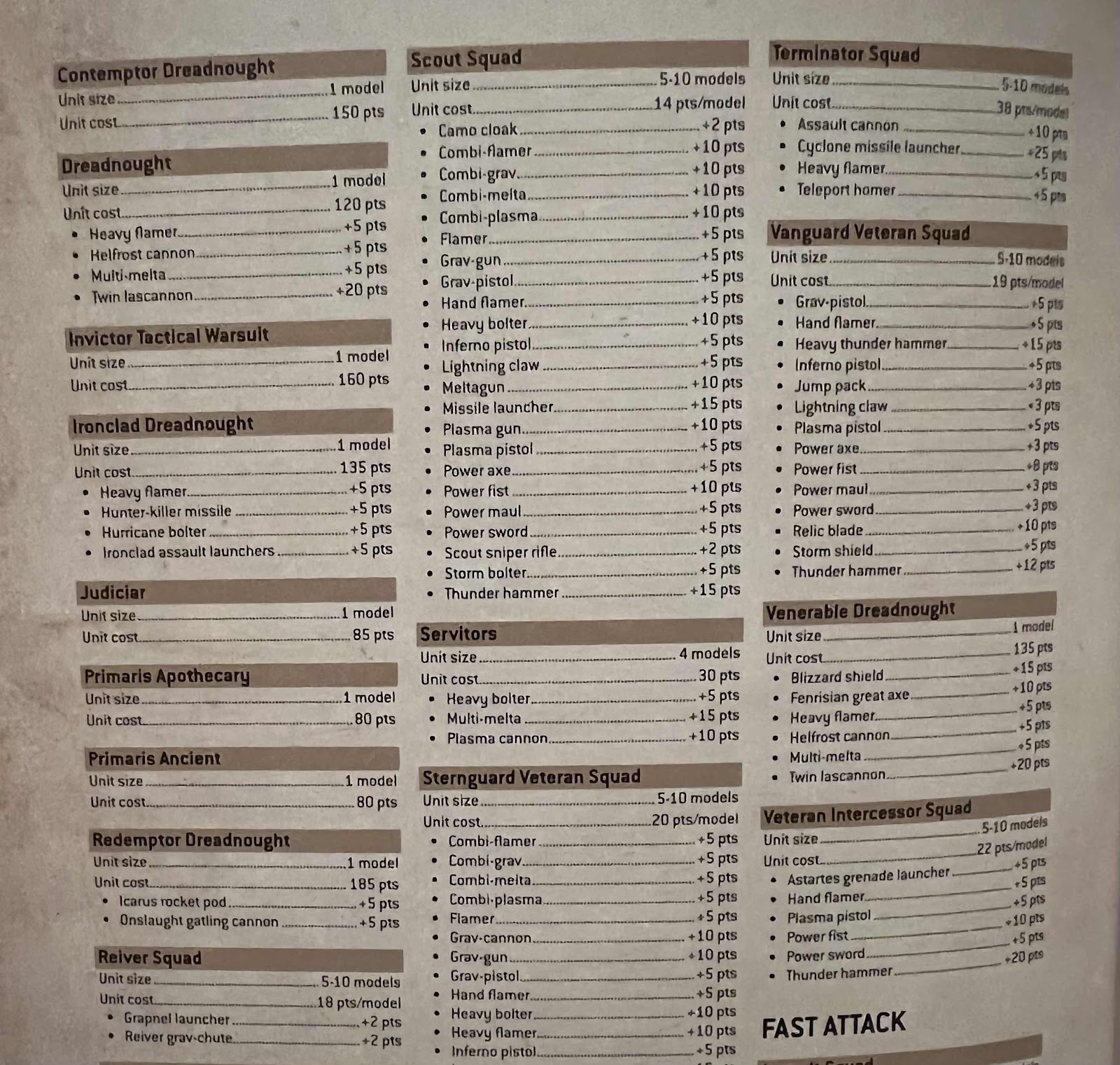 For Space Marines the ever present Redemptor Dreadnought has gone up 10 points as has the Primaris Chaplain on bike. The Storm Speeders have all come down 10. The Gladiator variants also all went down 15 points.
Grey Knights, both variants of the Dread Knights went up 10 points and you can’t take five now! Which is a definitely a good thing!
For sisters Morvenn Vahl went up by 15 points which is another one you could see coming.
Custodes you’ve already got new points! After about a week! Strange move but I imagine it’s because the book was delayed. Valerian down 10, free Misericordias and Allarus Custodians down by 5 is a big buff for them.
Chaos Space Marines are 12 points now but I doubt they’ll be at all viable without an extra wound and other improvements. Obliterators did come down 10 points though which is nice.
Necrons have had lot of changes which is great in some respects but I would say they aren’t on units you would probably take. 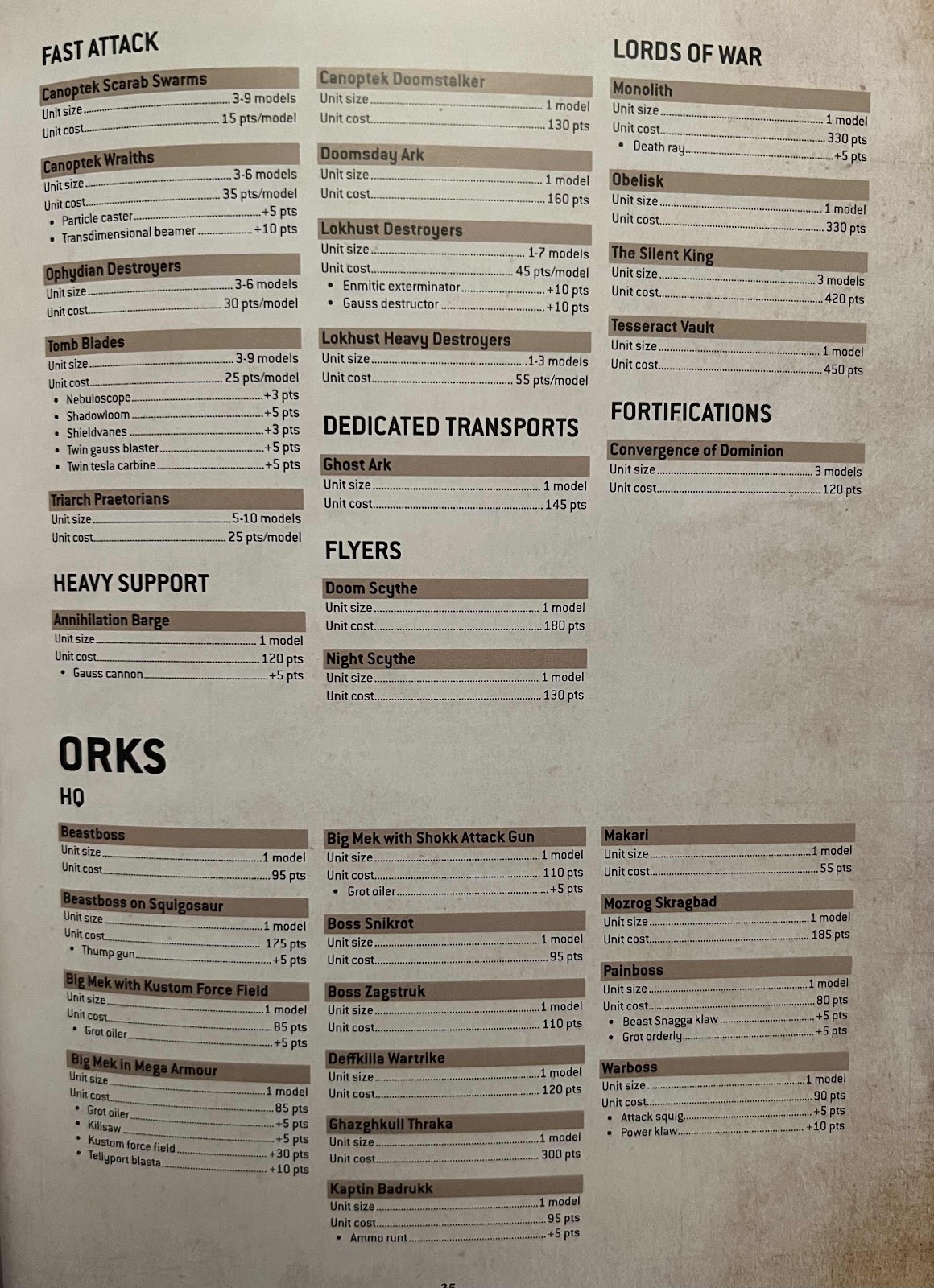 The Silent King down 30, the Monolith 30 and Tesseract Vault 50! Big changes but again I doubt you’ll see them.
Orks have had a bit rough time, I am biased but the Kill Rig and Squig Buggies up 20 is big and the Beastboss on Squigasaur going up 30 is a lot. He is very good but that’s the core of Ork armies that were in a pretty good place.
The good news is Meganobz are down 5, as are Killa Kans and the battlewagons are down 15. Which includes the Kannon Wagon from Forgeworld which I personally rate.
Finally the Hive Guard for the Tyranids have gone up by five points which I think is a good move.
Conclusion
Obviously we’ve been sent this by Games Workshop which we’re very lucky to receive, however, as I mentioned earlier these books should really be digital and free as a regular patch to the game. Have them as part of the app subscription and you’ve got the app generating more income.
I just think this method of delivering points changes is far too slow, so having the points changes as a part of the balance data slate would be a great idea. Hopefully it’s a cheap set of books at the very least.
On the positive side, I think regular updates are brilliant for the game and the new missions and secondaries are great. Just make them digital and make Bad Moons great again is all I ask!
Thanks for reading,
Aveinus Kaane
Posted by Aveinus at 15:23