Hello everyone,
Apologies for the delay on this review, I’ve had some issues with the desktop version of blogger not spacing the posts properly and turning all of my text into code!
But it’s here after long last the Ork codex for 9th edition! 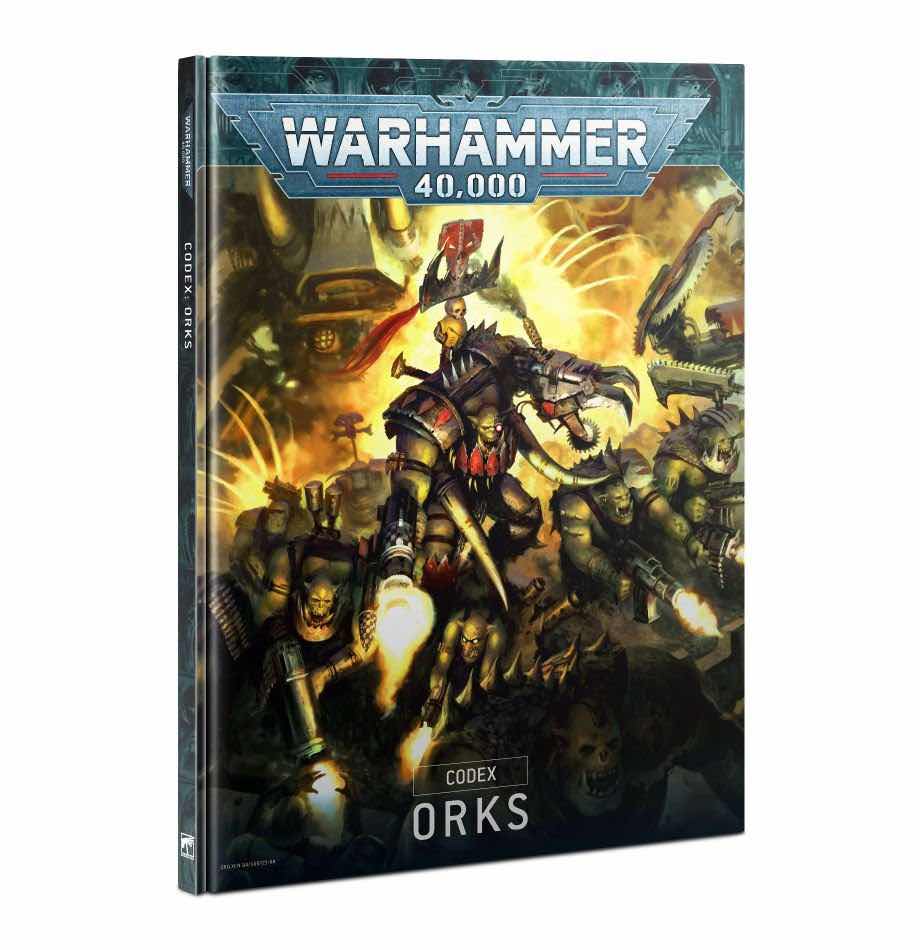 I must say I wasn’t a fan of how Games Workshop originally released this in the Beast Snagga box set which seemed unfair to those of us who couldn’t get the box or just didn’t want it. This is all forgotten now though as we’ve all had a chance to see and get hold of the new rules and models.
So let’s get on with the review! 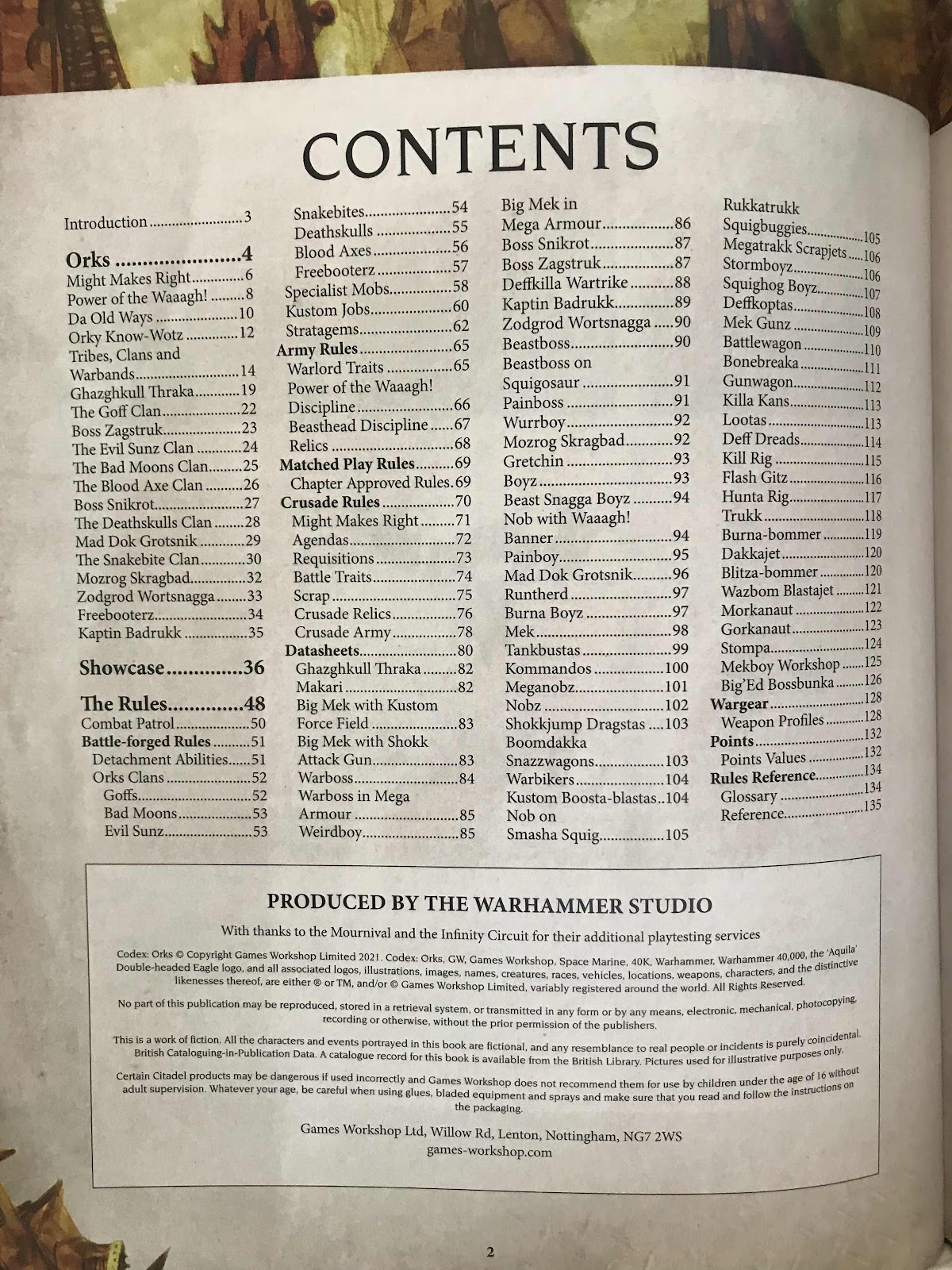 As usual there’s tonnes of great artwork and lore in the book. Those of you that are buying the book for this won’t need to read this review so let’s just get straight to my thoughts on the rules and my favourite parts of the book.
Ork Clans
So we can’t talk about them all until we start doing video reviews in the future but for now let’s look at the glorious Bad Moons which are my clan! 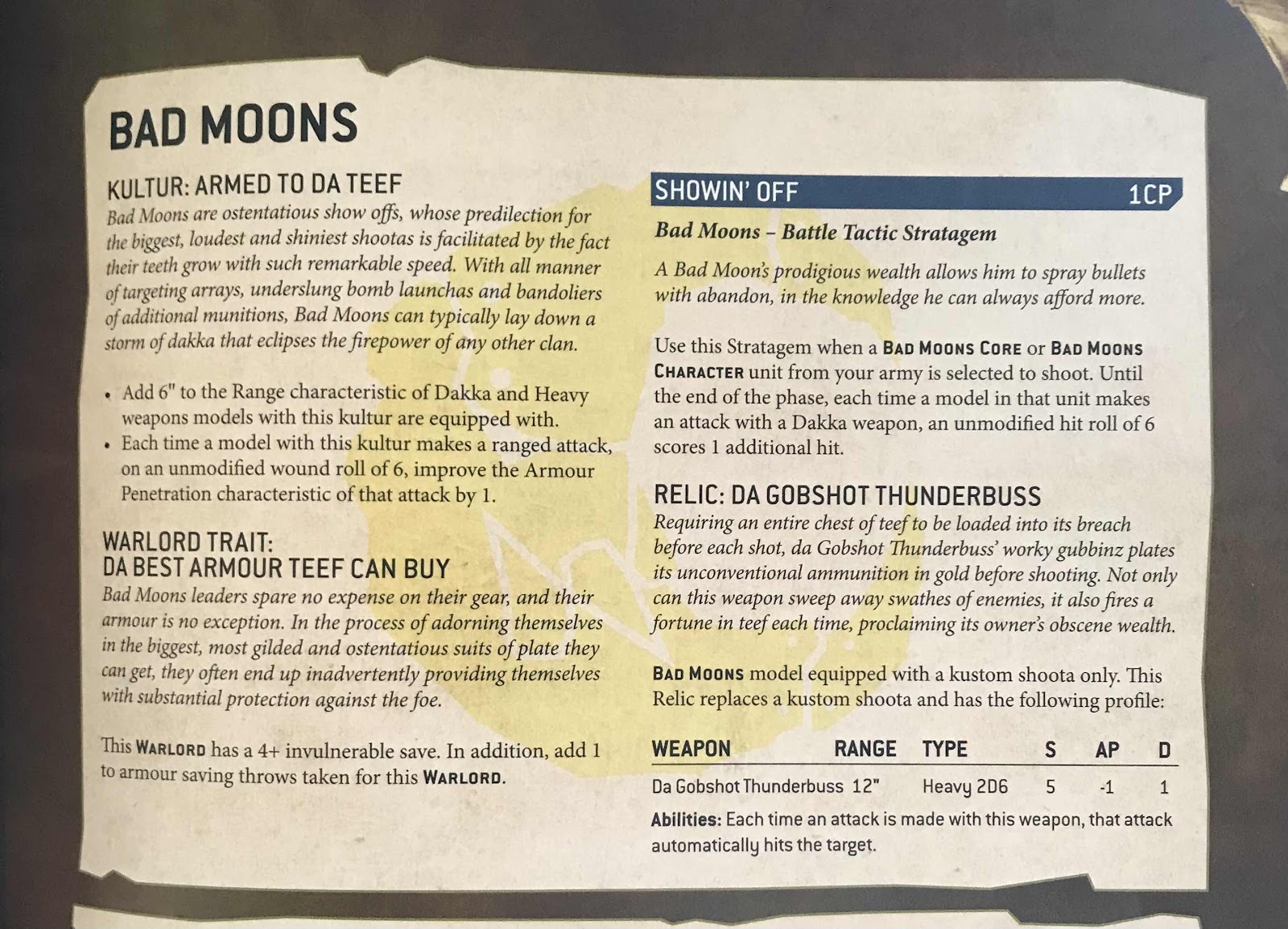 So I think it’s fair to say they aren’t the best of the clans but certainly not the worst. The Warlord Trait, will be handy for a second Warboss and the Stratagem if used correctly is one of the most powerful in the book for 1 CP.
Using it on Tankbustas or Warbikers will be a powerful buff with those sixes generating not just more attacks but extra hits!
The actual clan traits are lacklustre however, the extra range certainly helps Dakka weapons or Kustom Mega Kannons but the extra rend on sixes will make little difference unless you’re taking shoota boyz.
Goffs are likely the best clan with the exploding sixes to hit in combat and strength five is very powerful!
There is however the option to take Goffs in a separate detachment, so we’ll take a look at it next.
Ork Detachments
Interestingly Ork detachments are back to being an important part of army list building, I think we’ll be seeing other clans featuring regularly, however, I think they will most importantly be used to provide more fast attack slots or in particular more Warbosses to your army.
Orks seem to be quite heavily reliant on Warbosses now because they pack a mighty punch and are harder to kill than in the previous edition.
This is because as you can see below you can now only include one Warboss in each detachment. 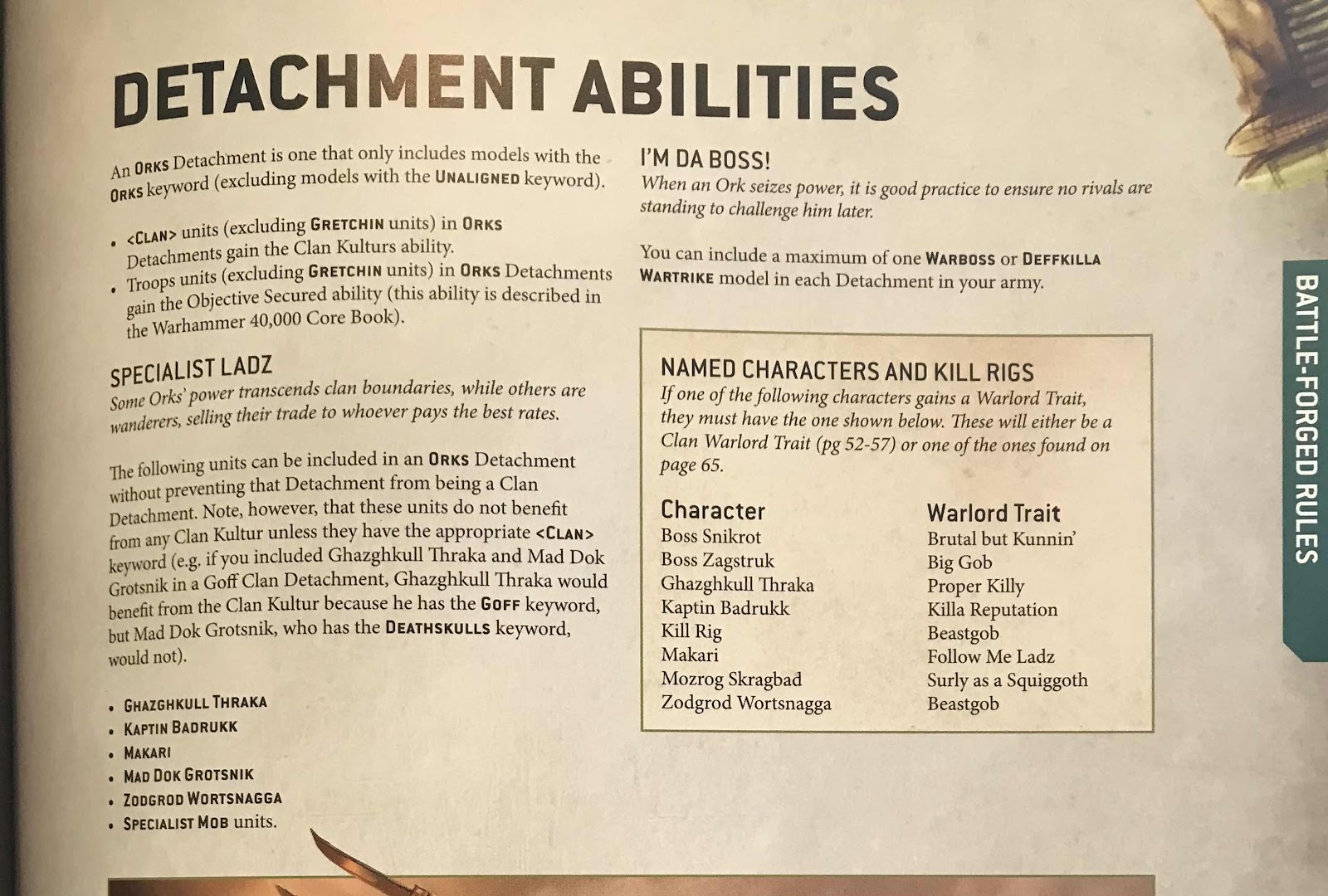 Multiple patrols could now be the go too for Ork players if you’re wanting a Beast Boss on Squigasaur and a Deffa Killa Wartrike in your army.
The one major thing I do have to moan about is taking Ghazghkull Thraka in anything other than a Goff army.  I agree he should be at his best in a Goff army but having him turn off your armies access to clan stratagems in particular is an awful rule.
Ghaz is a beautiful model and I have him painted up in yellow armour, but now he turns off my access to the Showing Off clan stratagem for the rest of the army! He should only have access to Goff abilities but making him so he nullifies your clan stratagem for anything other than Goffs is rubbish!
Rant over!
Specialist Mobs
So specialist mobs are back again after their debut in psychic awakening, they’re something you can take one of per detachment. This again may lead players into having multiple detachments again as you can take something like Trukk Boyz twice in your army for that movement shenanigans below. 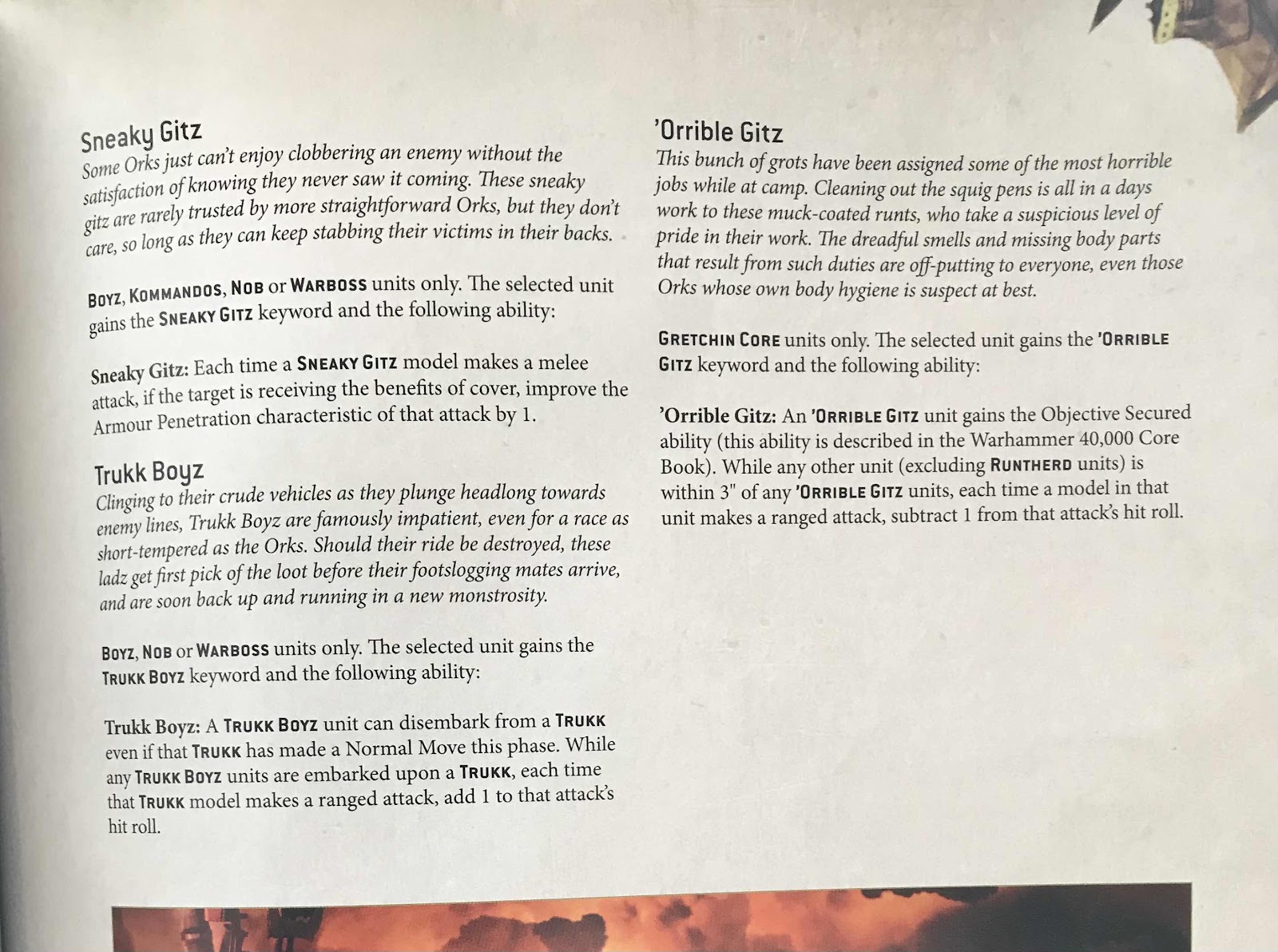 Big Krumpaz is something I can also see being useful on a more Mek themed Ork army, getting +1 to hit on a Morkanaut, Gorkanaut, Meganobz or Deff Dread unit could be quite powerful. Particularly negating some of the issues the Gorkanaut could have with losing wounds and dropping down its damage tiering.
This however, does again turn off your clan traits, which is again something I’m not a huge fan of but I can see how it could make Goff units very powerful. These specialist mobs could therefore see use in non Goff armies as they won’t be going without the Goff close combat abilities.
Trukk Boyz will surely see a lot of play though, Meganobz as Trukk Boyz could also see some use. Using them to exploit the enemies lines and take a vulnerable objective or to at least stop them scoring on it could be crucial for securing a points lead early on.
Kustom Jobs
Another new section for the book, although I doubt these will play such a crucial role in list design. They add some nice options but are possibly more of an option for casual games.
They also can’t be taken on units who are in specialist mobs. 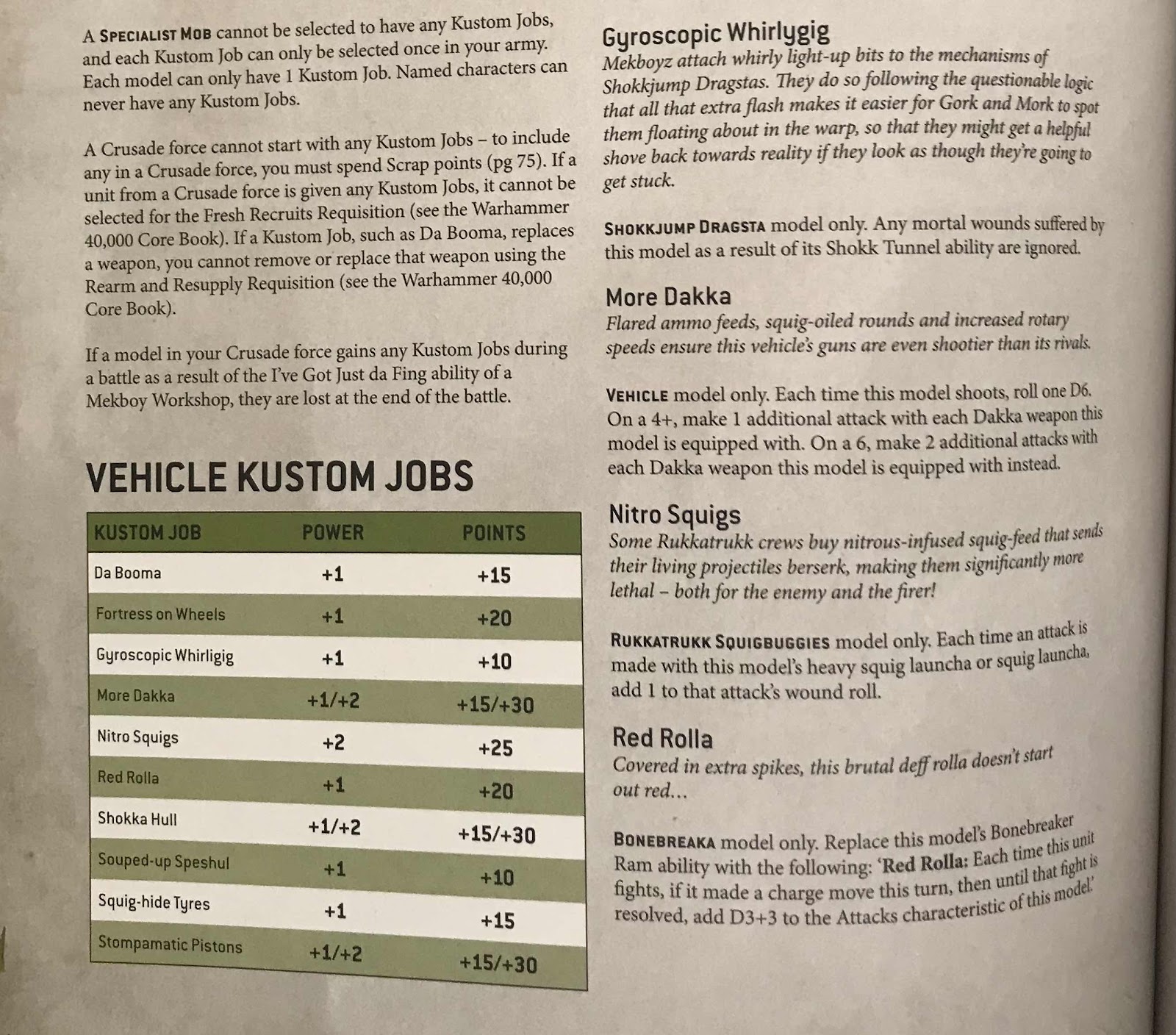 Nitro Squigs seems to be the pick of the bunch though, adding +1 to wound on the squig launcha is excellent.
Stratagems
Another area with big changes in the new book. Orks have lost some of their very best stratagems and gained some very average ones. Losing Green Tide was expected though as gaining another 30 T5 Boyz for 3 CP would have been far too good. 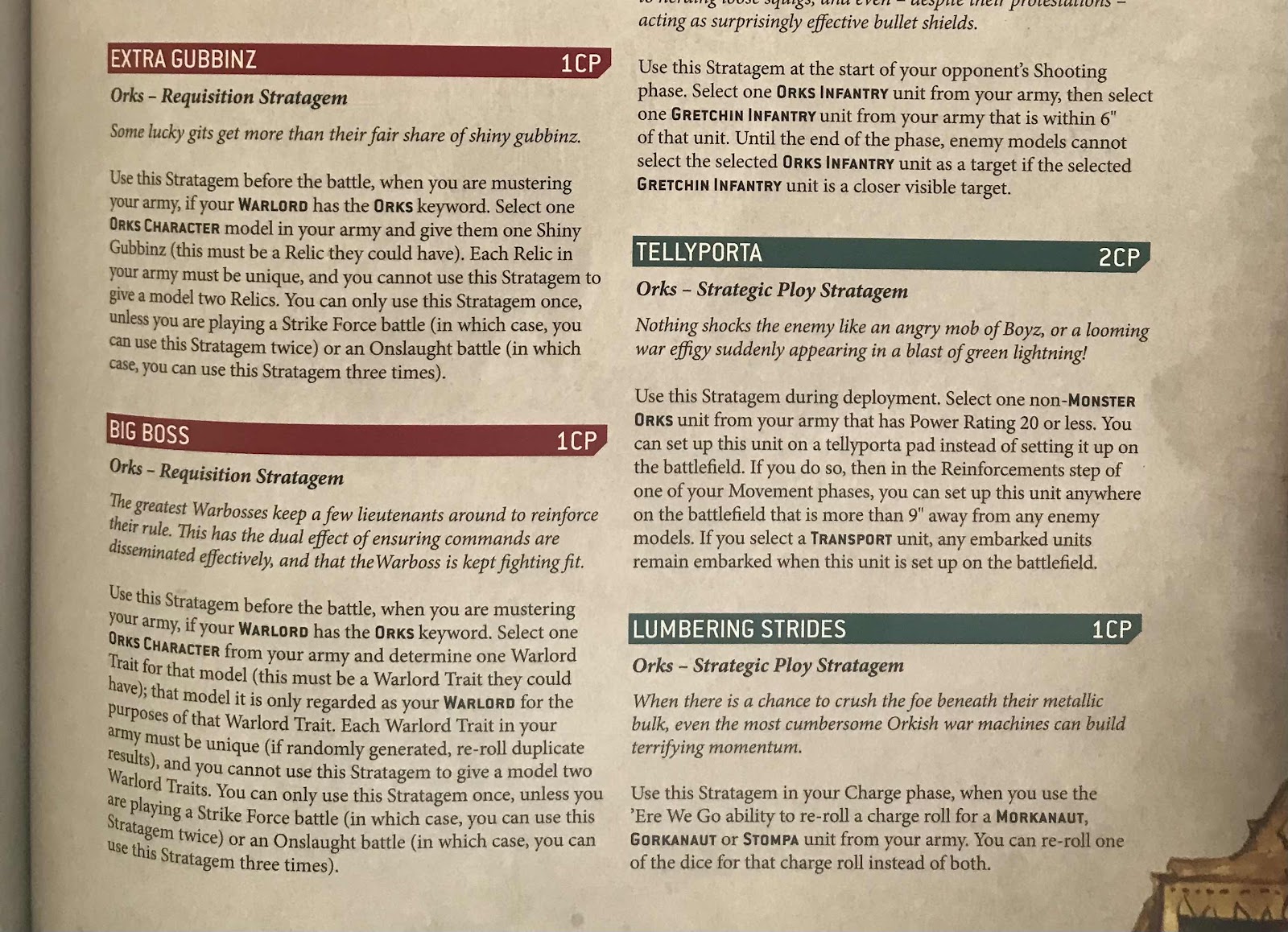 Another favourite of mine is Careen for some orky fun, which allows a vehicle to travel a further six inches if it explodes for 1 CP. A potential clutch move in a game to destroy some damaged enemy units!
I do however, think the way to use Orks now will be to invest CP pregame. Extra patrols for Warbosses and then using the Stratagems above to provide them with some of the excellent Warlord Traits and Relics.
We’ll take a look at them in part 2!
Thanks for reading,
Aveinus Kaane
Posted by Aveinus at 15:00