Hello everyone,
I’m back again to take a look at the cities of Sigmar battletome! 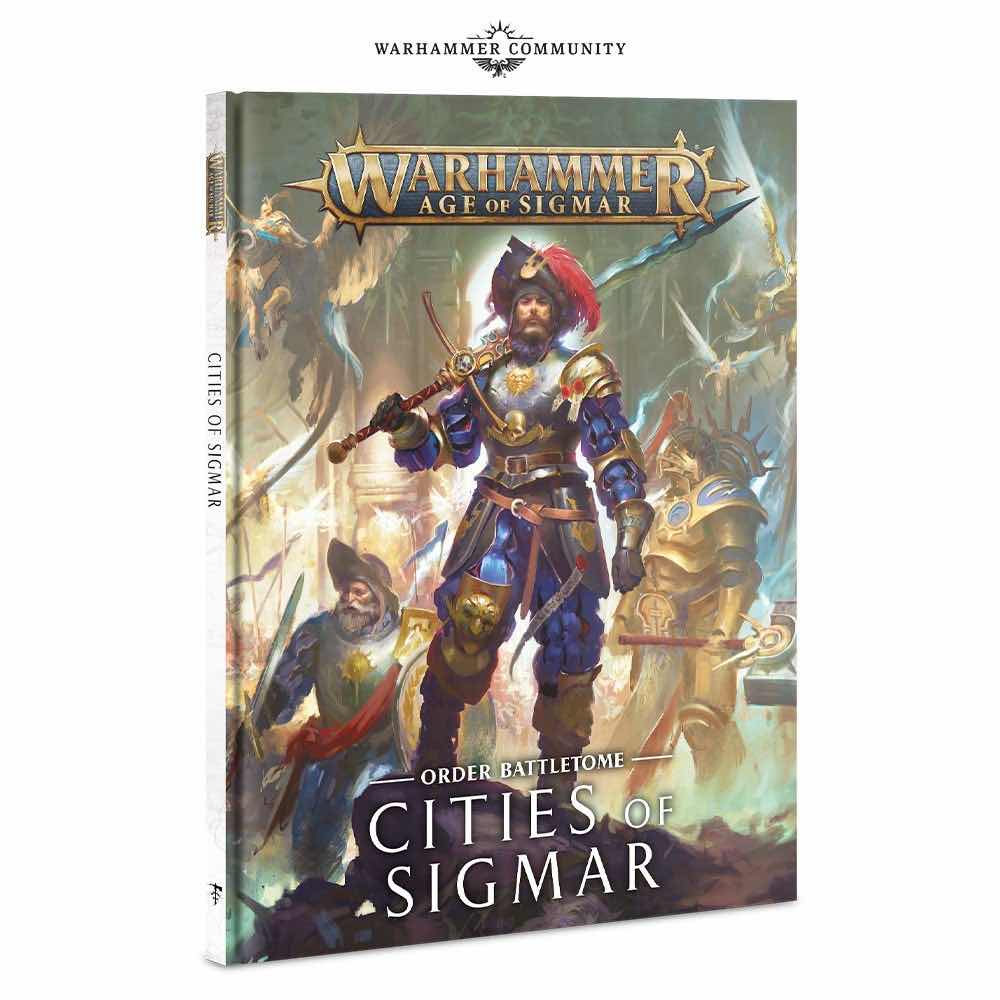 A particularly important one for me as a dispossessed player! I did have mixed feelings about the book coming as i thought the way GW handled the order models going to last chance to buy was terrible. A very poor piece of customer care from games workshop.
However, It does seem that they listened and changed their ways as the way they announced the sisters models going away was much better.
So with my short rant over let’s have a look at what is a very good book.
The book is huge and has a lot of information in it so to make the review actually doable, I’m just going to have a look at two cities in part 1 & 2 along with some of the units I think will be really good to field inside them.
It’s a pretty extensive book with seven cities to choose from and I’m sure there will be more featured in upcoming editions of white dwarf.
Allegiance abilities
Before we go any further we should look at the allegiance abilities and battle traits... 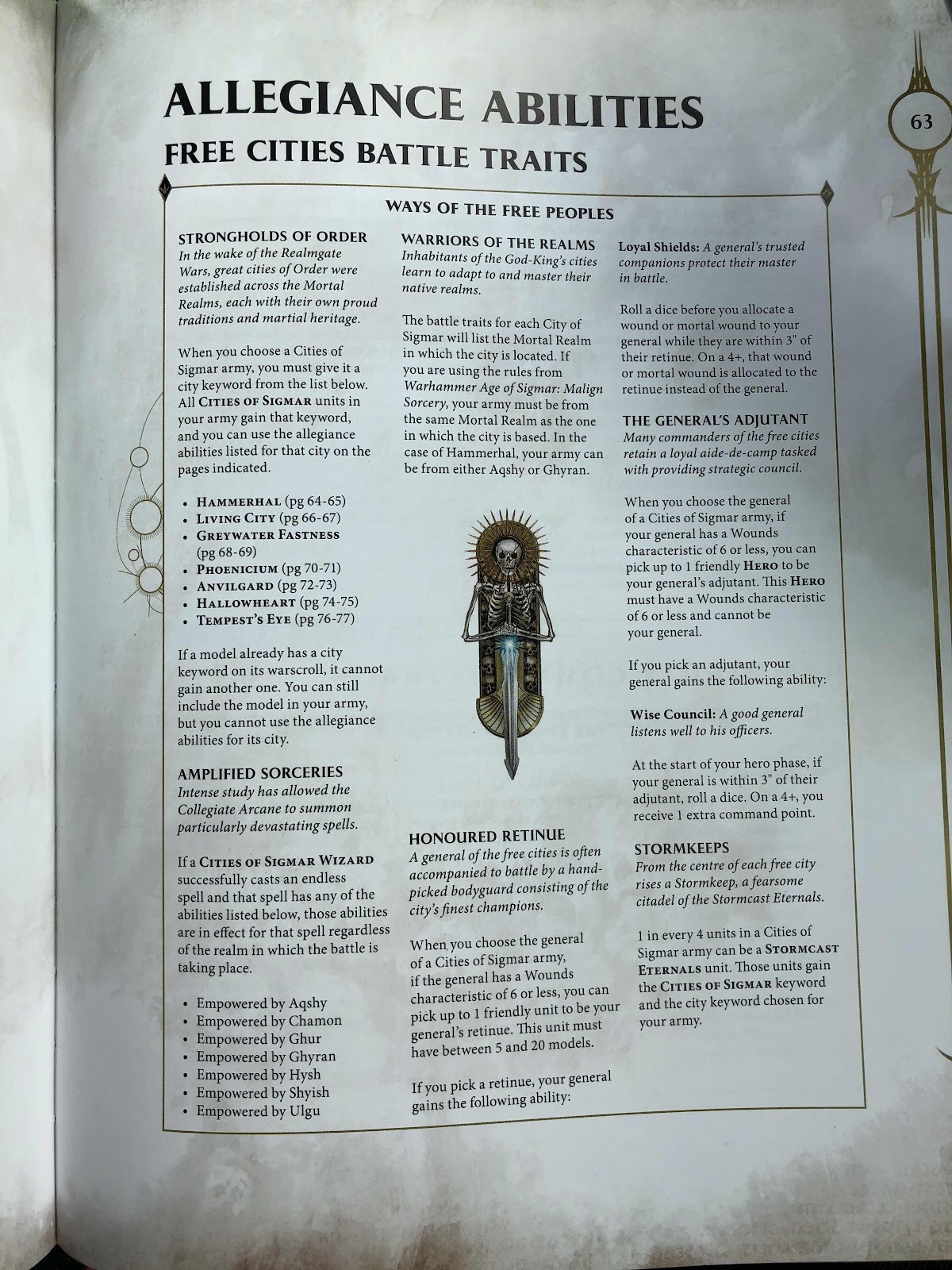 Amplified Sorceries
So first off it’s amplified sorceries, a pretty big deal as all endless spells are classed as being empowered despite what ever realm you are fighting in.
So that means for every battle you’ll have empowered endless spells! I’m looking at you lifeswarm and soul scream bridge!
Honoured Retinue
Now this is a cool way to make those squishy Warden Kings a lot tougher! Keeping him protected in three places of power with Longbeards or Ironbreakers now makes him a lot more useable in that scenario!
The Generals Adjutant
Another good way of generating command points. The cities are not rolling in command points but they do have other options in the form of artefacts and spells that can generate you more CPs.
Stormkeeps
Finally Stormkeeps allow 1 in 4 of the Units in your army to be stormcast.
Pretty good for filling some of the holes in the cities book. I personally see a lord arcanum or one of these chaps on a tauralon being pretty handy for a mobile two cast wizard.
Living City
So Living City is the first of two cities I’ll be having a look at from the book. 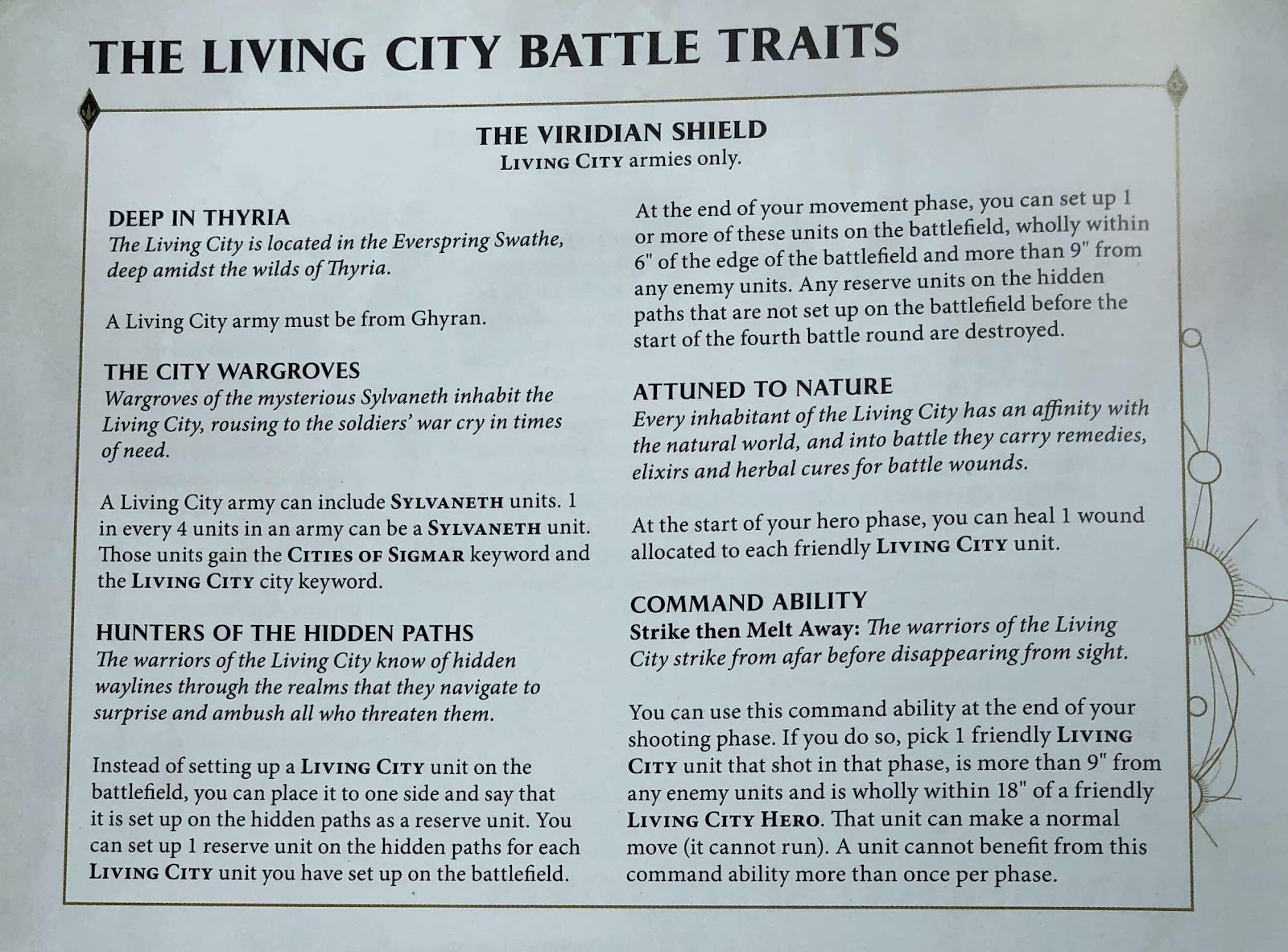 Hunters of the Hidden Paths
So I think this is the probably the main reason to take this city. Particularly if you want to play duardin, as it allows you to ambush on to within 6 inches of the board edge!
I think this is excellent as no matter what army you’re facing, this will cause them a headache. It’s an excellent way to threaten your opponents objectives whilst defending your own. Although I think there will be a balance to it as committing too heavily to the attack could open up your deployment and your objectives to easy capture.
Attuned to Nature
This one is pretty explanatory, who wouldn’t want to heal a wound on each unit per turn!
With empowered lifeswarm to compliment this there is some huge potential for healing in this army.
Again it could be situational as you have to have a wizard nearby and with no increases to your casting, it could be too inconsistent in practice.
Strike Then Melt Away
A great command ability to make use of if you’re adding some shooting to your army. I think Irondrakes could make use of this, just to increase the potential charge distance of your opponent in their turn.
Alternatively you could use this to move closer to an objective if you’ve cleared the enemy off of it. Blaze Away would also be active if they were set up in range of shooting an enemy unit, as if it’s a set up and not a move they can then fire twice!
Gyrobombers could also be great to use with this command ability, with their great movement and bombs but we’ll talk more on this later in the review!
Command Traits
This city doesn’t have the best command traits but I think they are all useable. 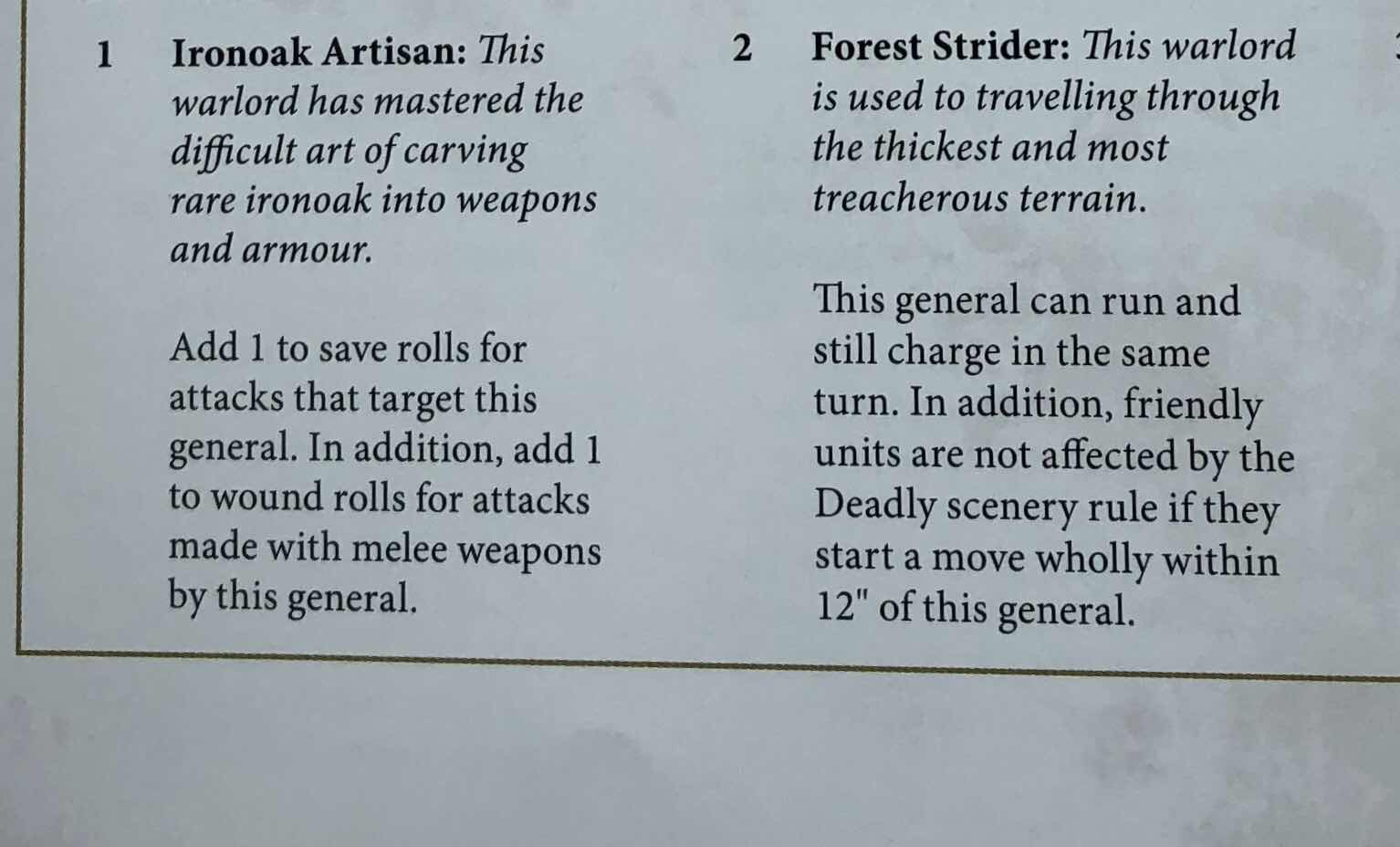 Iron Oak Artisan
I think this has to be the best trait, adding one to save rolls and one to wound rolls is pretty great on a character.
Particularly in this book, I think the Freeguild General on Griffon will make the most of it. I’ll come to why it’s so good for him later on.
Artefacts of Power
Moving on, it’s the artefacts this time. Again I think there is one in particular that I would go for above the others that are mediocre. 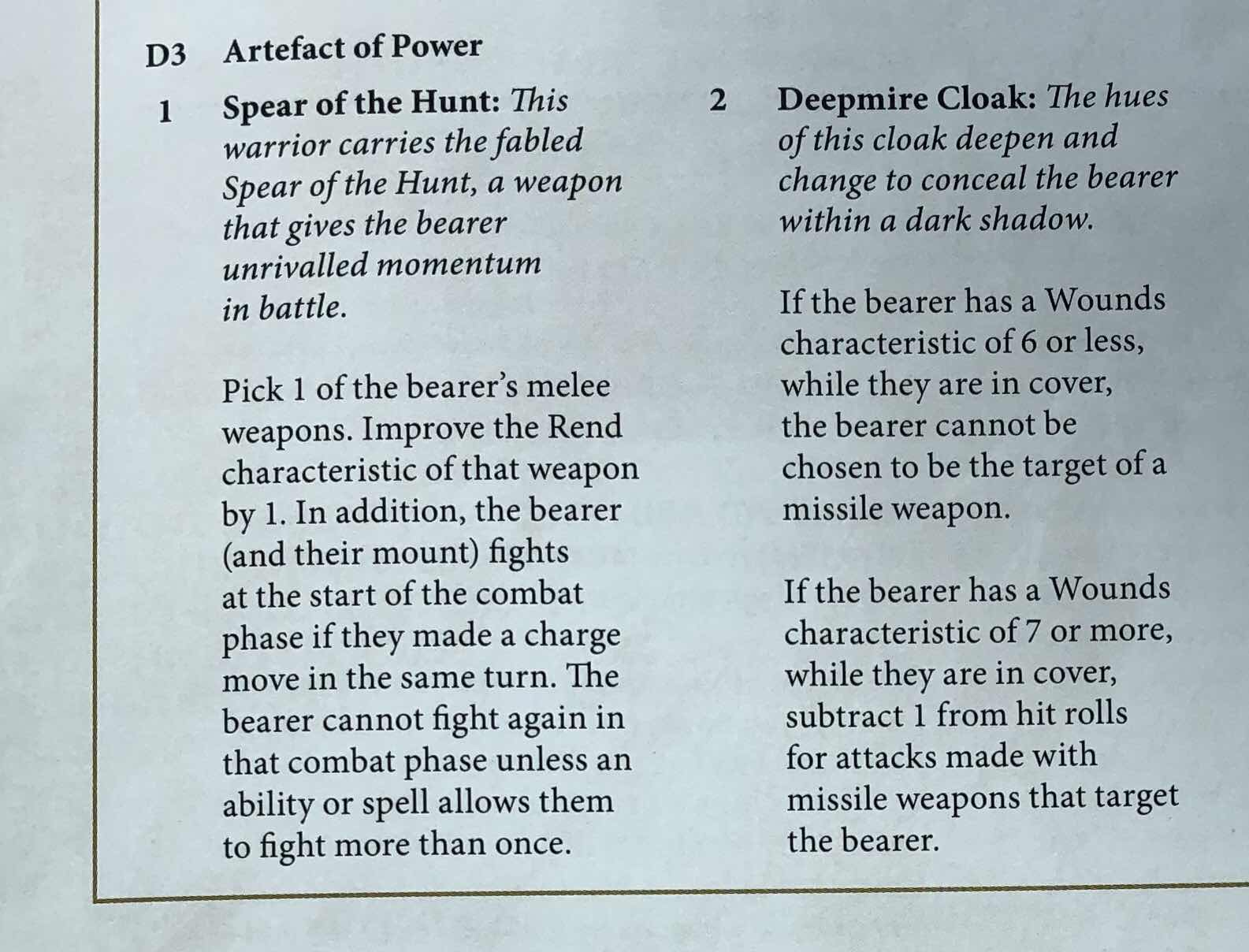 Spear of the Hunt
Now this is a pretty great artefact. On top of what we had for the command trait on the Griffon, he’s now getting a further minus one rend and he can fight at the start of the combat phase if he charged.
A pretty great way to get more out of an aggressive general that you can move on from a board edge.
Lore of Leaves
Again there are some pretty good spell options within the city. I’m really liking the healing potential you have for maybe a big block of Hammerers and for the General on Griffon to make use of! 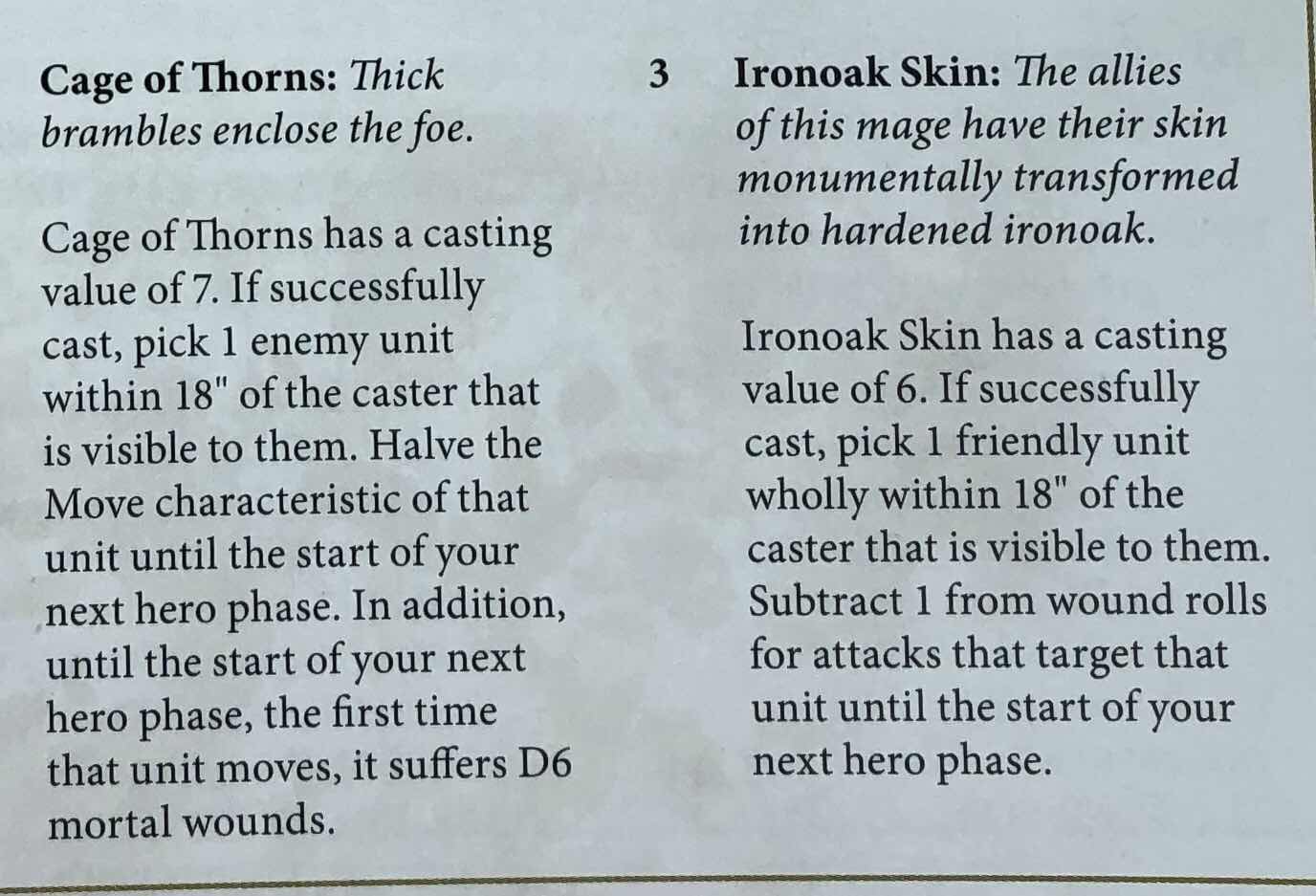 Iron Oak Skin
This spell is another great way to either keep a screening or attacking hammer unit well protected. Combining this with Pha’s Protection from a battlemage you’re making a unit -1 to hit and -1 to wound from Ironoak Skin!
If you could find a way to get this off reliably you could have some great use for it and not need to pay the points for endless spells.
Living City Units
For this we’ll take a look at a couple of units that might not be optimal but will definitely be  something I’ll look at using.
Although I doubt I’ll use any Slyvaneth, you can however, use them in living city and they gain the cities keyword meaning you can give them some of the benefits we’ve already talked about. Character wise, a treelord could be a pretty good aggressive character that can set up, shoot and then charge into the enemy.
Gyrobombers
That’s right, Gyrocopters and bombers are now pretty good! Finally!
So making use of these will be really interesting... 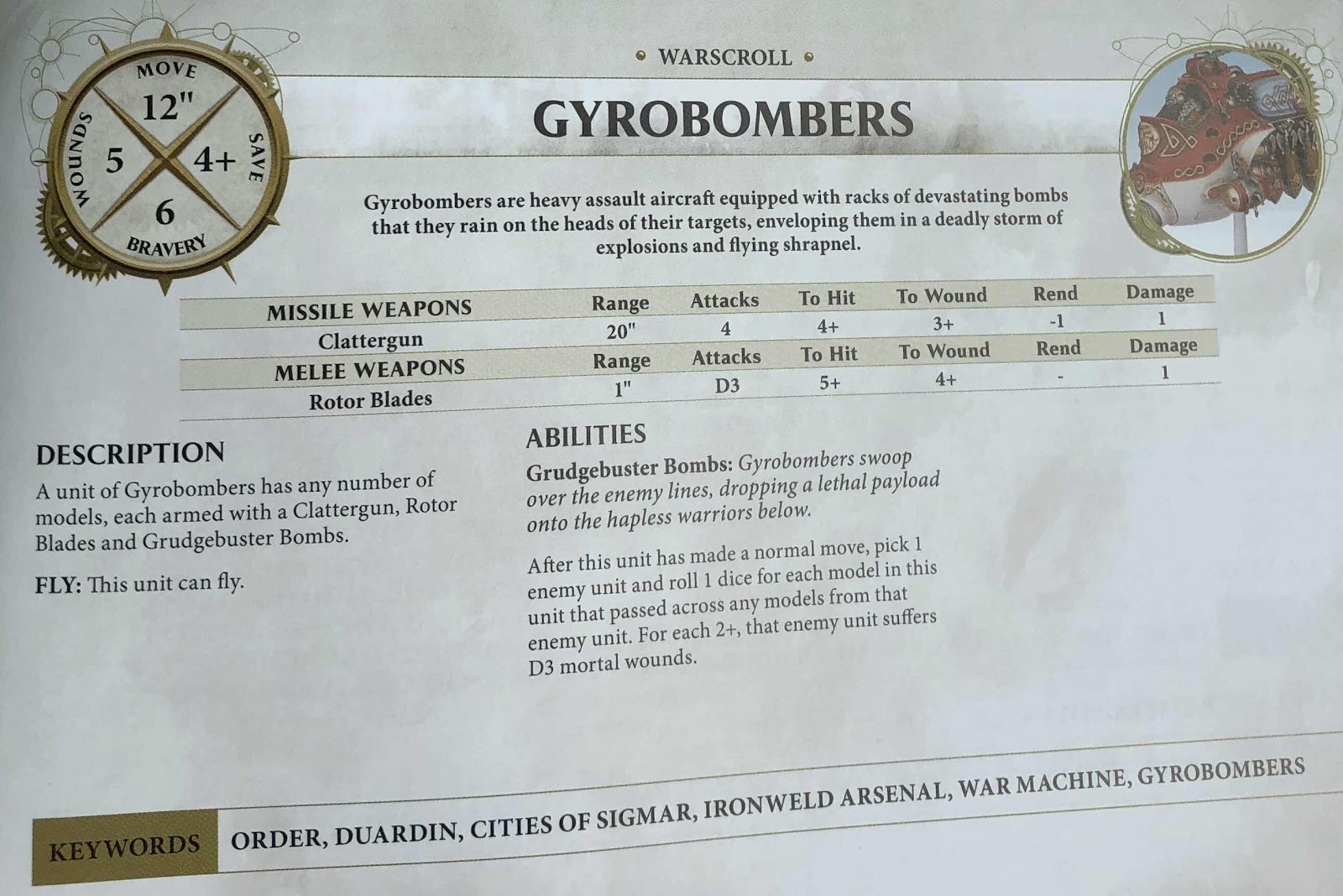 So with Strike and then melt away, you can ambush them onto the board and use the clatter gun from range. The following turn you have a move of 12 inches to fly over and bomb a unit before using the command ability to move again and bomb twice!
It could prove to be difficult in practice but it’s definitely a cool idea for a unit of three!
Freeguild General on Griffon
As mentioned earlier, the general on griffon can be an excellent aggressive character. He would have to be your general which limits command point generation but he can get access to the great buffs mentioned earlier. 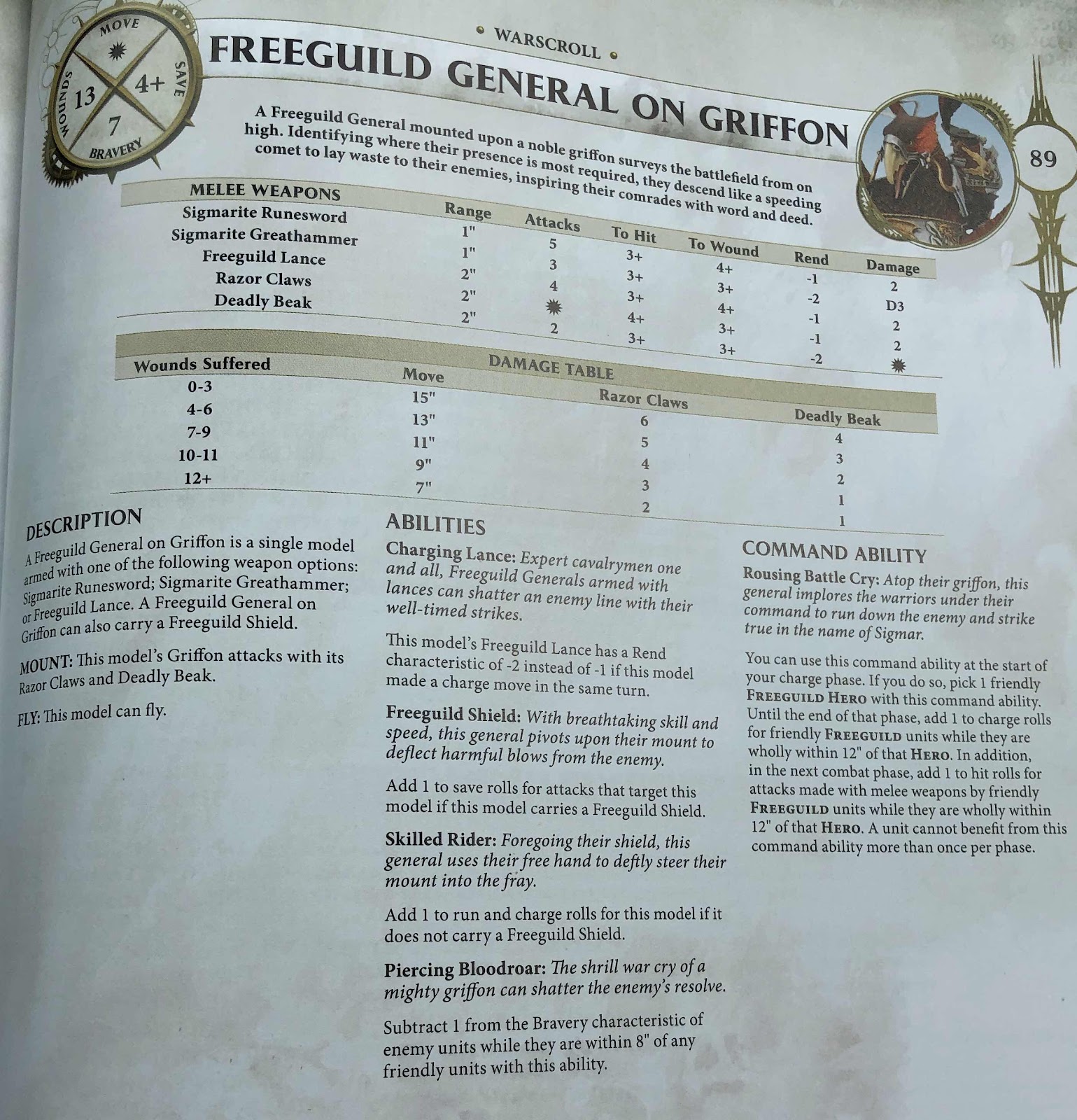 So with the buff from earlier if you take the shield, he’ll then be on a 2+ save. Plus he’ll have +1 to wound making the sword or lance much more appealing. When you then add on the -1 rend you’re getting either -2 on the sword or -3 on the Lance!
You’re then also striking at the start of the combat phase too!
If you’ve got command points you can also use the command ability on yourself to be on +2 to hit with your sword or lance.
Irondrakes
I’m biased being a Dispossessed player but I think Irondrakes can be good in this city too. If you go for multiple small units of them you can strike from ambush with 20 shots from the drakeguns because they’ve set up, rather than moved onto the battlefield.
They would be exposed but you could bring on screening units or combat units like Hammerers in front of them to move onto the objectives.
Conclusion
Overall the book is excellent for its variety. It’s a shame the Dispossessed aren’t stronger in the book but they play their part. I think Longbeards, irondrakes and Hammerers have a place in some good lists but there are better options in the aelf factions competitively.
In terms of the Living City I think the ambush mechanics make it one of the best cities to pick other than the crazy magic you get in Hallowheart.
The ambush mechanic gives you an excellent tactical tool box to help catch your opponent out but I think the issue could be is how you support your ambushing units with magic as the mages would be exposed. You’ll then without a hurricanum struggle for consistency in casting the excellent healing potential in this city, with lifeswarm, attuned to nature and life surge all capable of healing wounds onto your units.
I do think Slyvaneth players will enjoy this city though as I think it’s in an improvement on their current books options, but any self respecting dawi shouldn’t talk about any stupid elves so we’ll leave it there!
Part 2 will be up soon!
Thanks for reading,
Aveinus Kaane
Posted by Aveinus at 14:39