I'm just going to have a quick look at the new Age of Sigmar expansion... Forbidden Power! 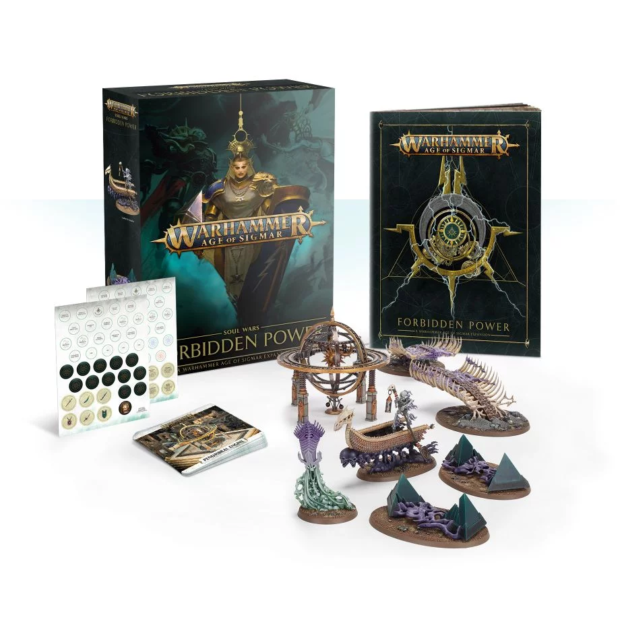 So I think this is a pretty big release for the game from a gaming point of view. New endless spells that are accessible to every faction is always pretty impactful and some new background to boot! 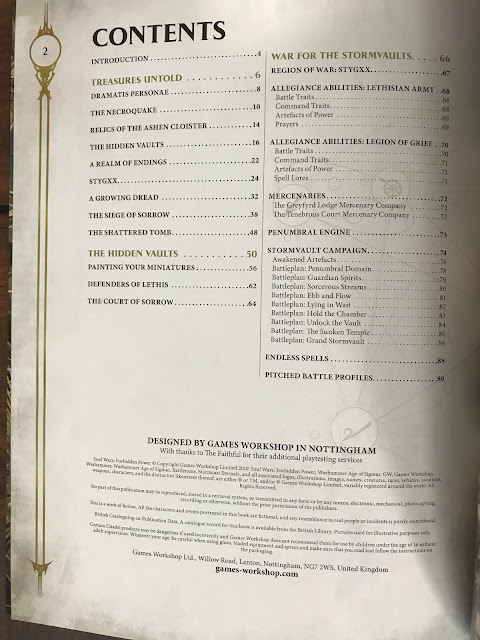 So I won't go over the new lore as I don't want to spoil it for anyone intending to buy the box for the lore progression. With some 67 pages of lore and background for the new armies, there's plenty to get stuck into! 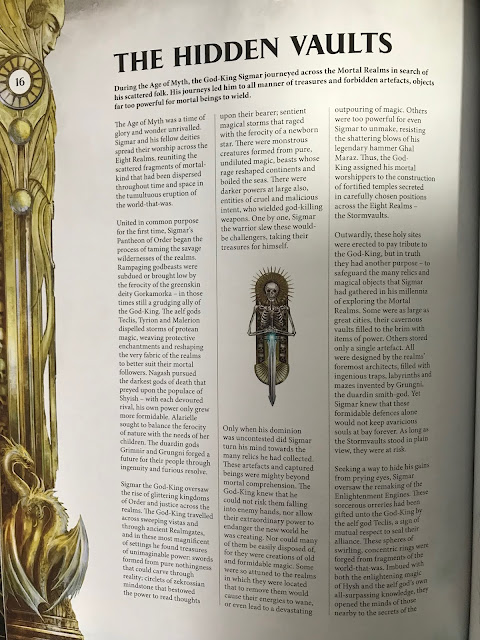 The necroquake destabilised the enchantments of the Penumbral Engines, revealing the locations of the Stormvaults to the inhabitants of the Mortal Realms once more. Some lie in the furthest reaches of the realms, while others are situated in the heart of Sigmar’s cities – both Hammerhal Aqsha and Hammerhal Ghyra are home to enormous subterranean Stormvaults.

Now, factions across the Mortal Realms race to unlock the Stormvaults for their own gain, seeking to obtain ancient treasures or free long-lost foes of Sigmar to grant them a deadly chance at revenge. Sigmar seeks to recapture the vaults to defend them, but the forces of Order are by no means united in this goal. Some, like the Kharadron Overlords seek to plunder the Stormvaults themselves, while others are interested in exploiting the Penumbral Engines, which, when repaired, can be used to conceal entire armies…

Arcane artefacts and strange engines from the Age of Myth aren’t even the half of it – Sigmar knows what would happen if the very greatest of the Stormvaults was breached. What would be in store for the Mortal Realms if, say, the great and ancient evil trapped on the shores of Lake Lethis was unleashed?
Pretty interesting new direction for the lore to go in! 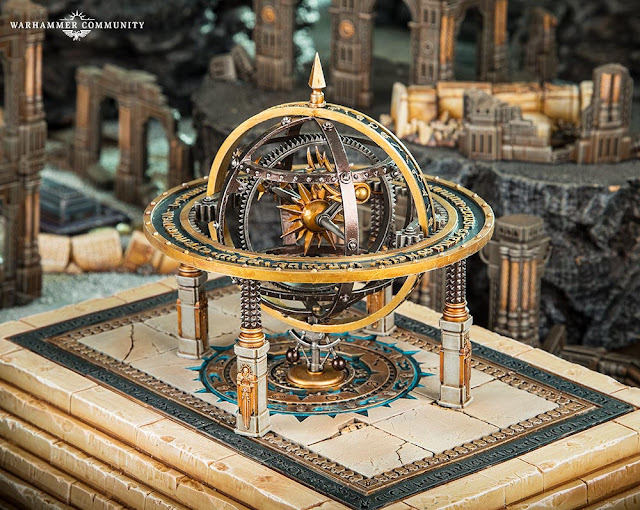 One of these Penumbral engines comes in the forbidden power box. A great model, but I think it's a bit lacklustre in its rules. 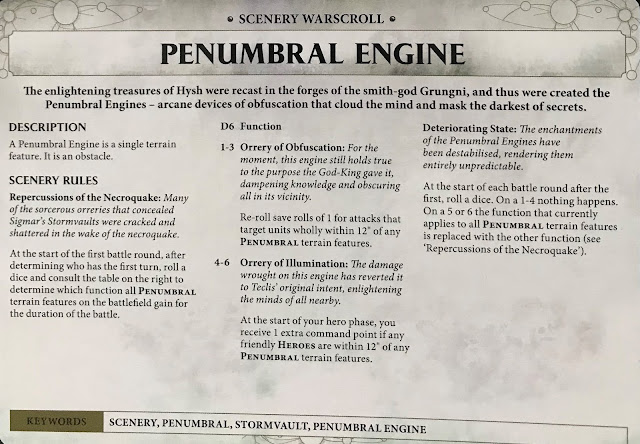 For 100 points its too expensive for any reliability in the game. You also can't rely on generating a command point or re rolling 1's therefore making it difficult to use it for any particular game plan.

For the Dispossessed it could be useful for making it harder to take a home objective for the enemy with the rerolling ones but again its a big points sink. With how easy it can be for some newer armies to generate command points 50 pts for this would see it being used on tables.

So onto the all important endless spells!

This first one has had some criticism for its model but I quite like it. Based on Charon the ferryman of hades in greek mythology, its just cool to see that realised in an AoS style model. 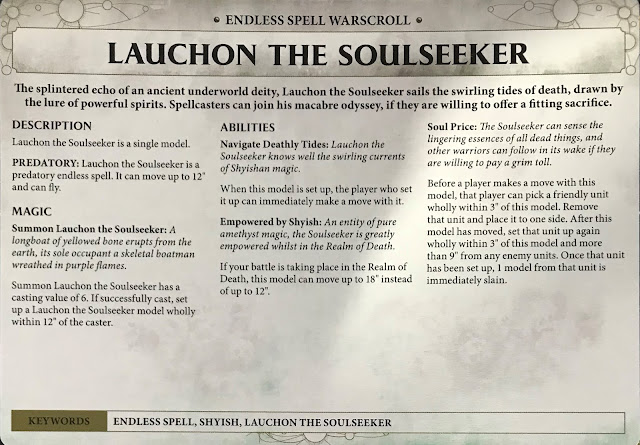 So the endless spell Lauchon looks like a game changing new spell as it gives every army another way to teleport a unit around the board. Particularly for movement 4 Duardin! I'm not biased at all.

Setting up the spell within 12 of the caster and then it being able to move a further 12 inches gives you a great way to move a unit in a hand of gork style spell.

However, picking a unit wholly within 3 inches of this model does limit which units could be chosen to be teleported with Lauchon. There will also be possible issues with finding board space for these units to be placed more than 9 inches away.

But overall a definite boost for armies lacking movement in an objective based game! 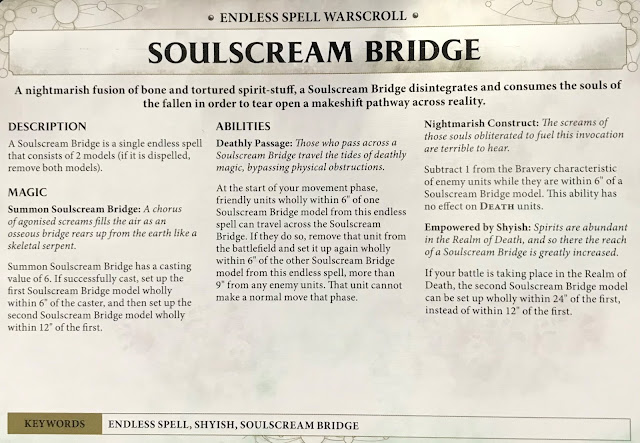 Next up its the Soulscream Bridge another great movement spell that is a bit confusing at first but gives you around a 24 inch movement ability. This obviously could be very difficult to achieve on the board with the position of enemy models and terrain however.

It could also be used to your advantage though as it could block off board space from your enemy.

Points wise at 80 its more than Lauchon at 60 but I think they're both worth the points. 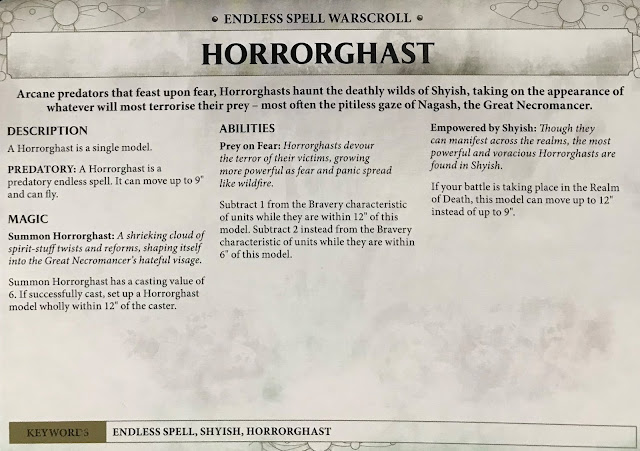 What I like about this spell is the ability to subtract 2 from an enemies bravery while units are within 6 inches of it.

If you combine this with the Legion of Grief there are some really cool bravery combos to reduce the bravery even further!

We'll look at this below.


So onto the Legion of Grief, another really cool addition into this book is two new armies that can be used in matched play. 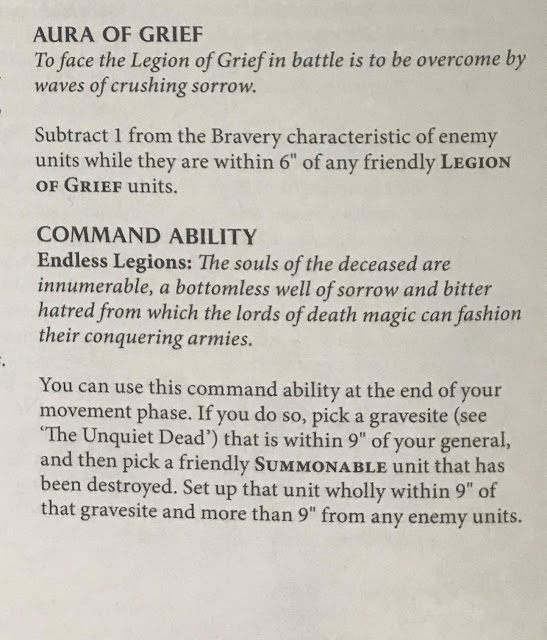 In this allegiance you have the usual Death abilities such as the Unquiet Dead, Invigorating Aura and Deathless Minions.

However, you get the above Aura of Grief, which is really cool when you combine it with the Horrorghast endless spell. Making the total -3 so far... 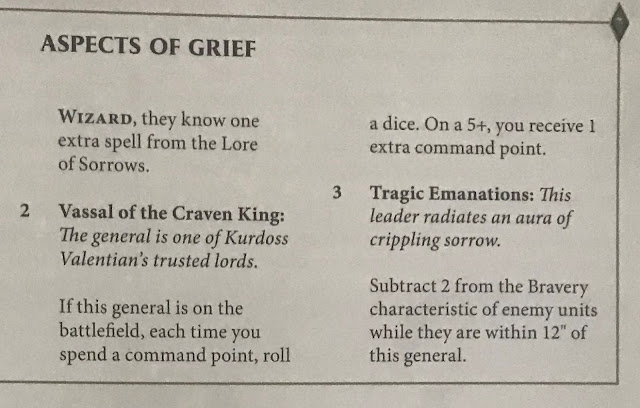 Tragic Emanations then takes bravery a further -2 to -5!

Very thematic for a Death army!

For their artefacts there's a nice -1 to hit from missile weapons for a summoning general in this army. 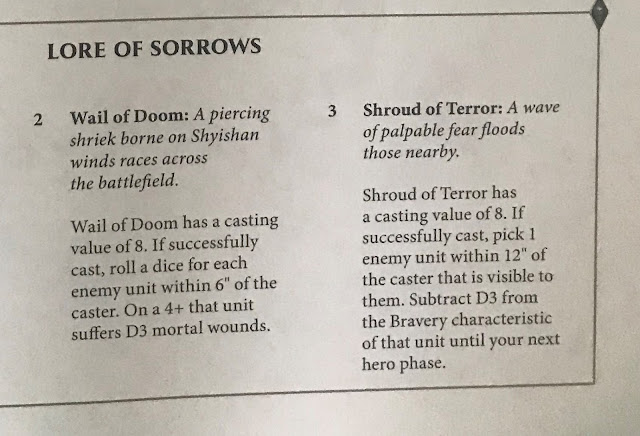 Now for the spell lore, although small there is that one spell that can subract a further D3 from the enemies bravery bringing it to a possible -8!

Brilliant against hordes however there is always inspiring presence to use on your big block of infantry, so possibly not that impactful but has the rule of cool for me.


So some interesting points for taking mercenaries, I'm not a massive fan of the idea of because of I can't see how a group of Dispossessed, Slyvaneth or even Deepkin would be okay with Flesh Eater Courts as allies!

For me it just blurs the lines of what people will be taking in armies even more now. I am a fan of the allies system but there are restrictions on who will fight for you so I like that option. As mercenaries if feels a bit off and and I'm not going to appreciate FEC appearing while I'm playing someone with Stormcast for example. This is just my opinion of course so I'm sure there will be players who like the freedom. 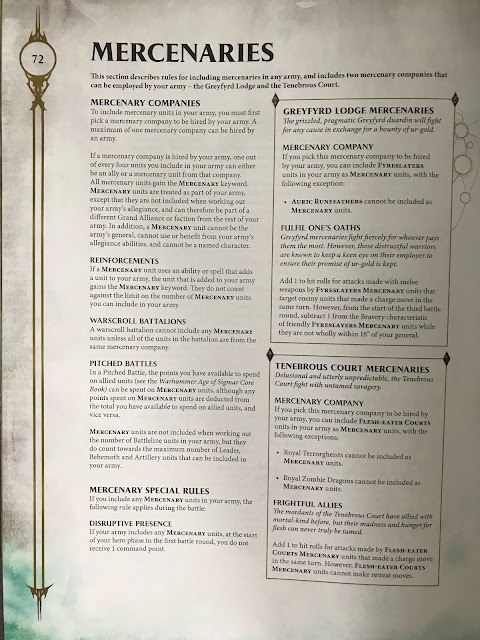 From a rules perspective there are some downsides to taking them in your army as it means they don't grant you a command point each turn! Pretty big for older armies that struggle to generate command points as it is!

The Fyreslayers getting plus one to hit is pretty strong on a big unit of hearthguard berserkers however they do suffer -1 bravery if they aren't within 18 inches of your general. I think it will be possible to play around this however, so overall i'd say its pretty strong.

The FEC are also pretty good, however the only unit I would really think about using are the Arch Regents. Two would give you two level two casters that can use two command points that are built into your army list.  For an immediate bout of ghoul summoning at the start of the game to then make back more than the 100 points you spent on the CPs. This would then still grant you the use of the two casters as well.


Overall I do really rate Forbidden Power as an expansion, the new scenery looks brilliant, although I would like some more specific human style buildings like houses for example.

The endless spells will have a big impact on the game in terms of giving the factions that have reduced movement a way of getting around the board whilst also giving us some new game mechanics to play with. Tactically they can be quite crucial too, for blocking charges and board space if played with enough foresight.

It is quite costly but if you're wanting to keep up with the curve in the tournament scene or keep with the advancing narrative within the table top game then its a good buy.

There are few negatives like the mercenaries being added into the game but I think they're overshadowed by the pretty great new spells we'll have to play around with.


Thanks again for reading, I'll have a long awaited update on the Dispossessed after this post has been put up!