Hello all
Recently we have been issued a review copy of 8th Ed Codex Space Wolves for review.
So I have been a massive fan of the Space Wolves since RTB01 & 1st Ed Space Hulk. Leman Russ has always been my hero too, the one I grew up reading about (forget Optimus Prime, The Hulk or Bat Man, Leman was the man). So I am always a bit protective over how he is portrayed in the 30k or 40k universe, but luckily he is more often than not a total legend in the Novels.
The Vlka Fenryka are also the last thing on my bucket list of things to do before I die, and fortunately they are well under way. So you could say; I am a fan.
I was always a bit wary of the Primaris Marines and how they would get inducted into the Space Wolf Chapter, and I sincerely imagined that they would have been turned away. I do think reading a novel regarding their integration would aid this and I sincerely hope they do it in the near future. I am not against Primaris Marines joining the Rout, as I think they are wearing possibly the best looking Power armour ever produced, and game as Marines should feel. 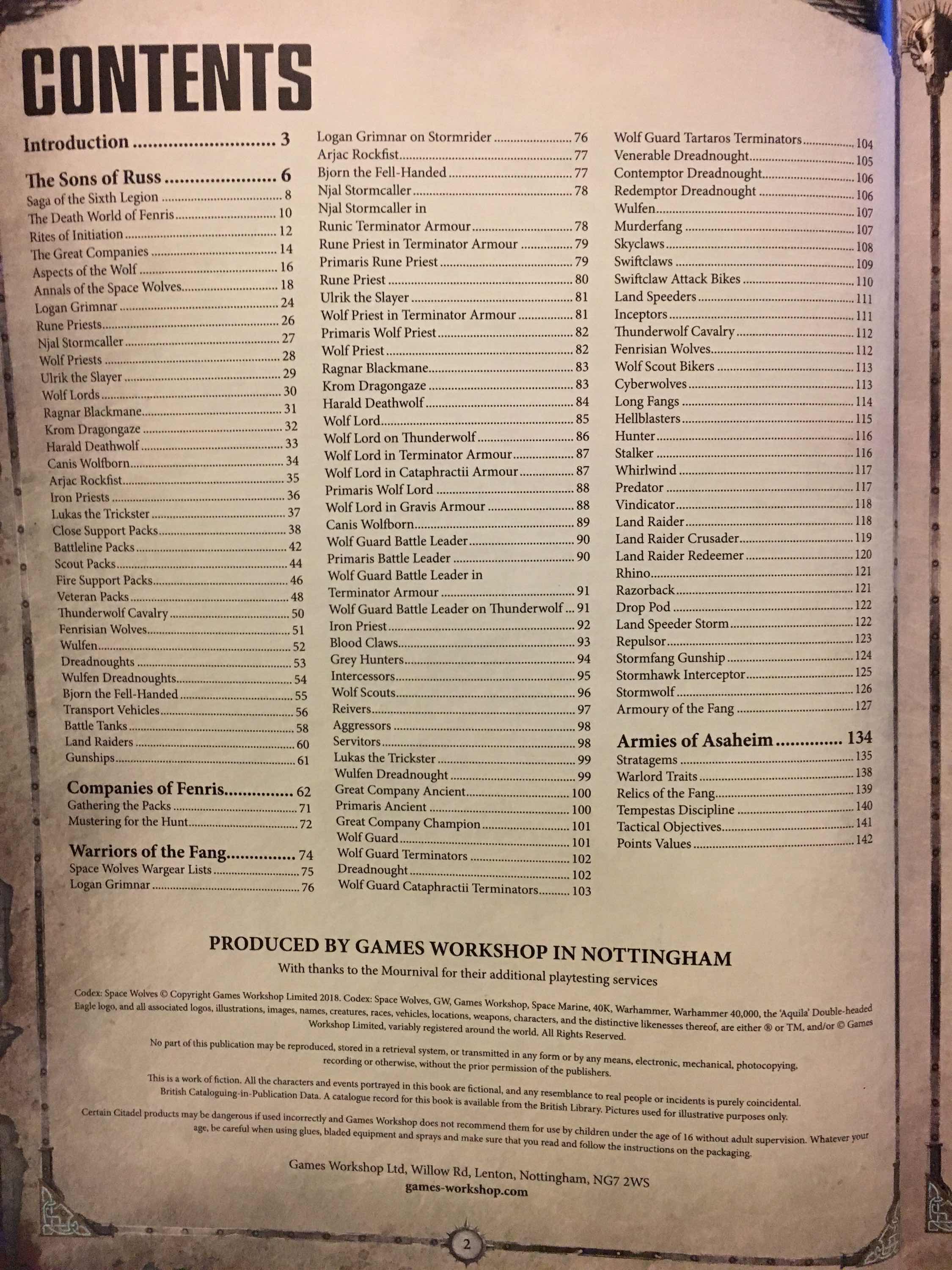 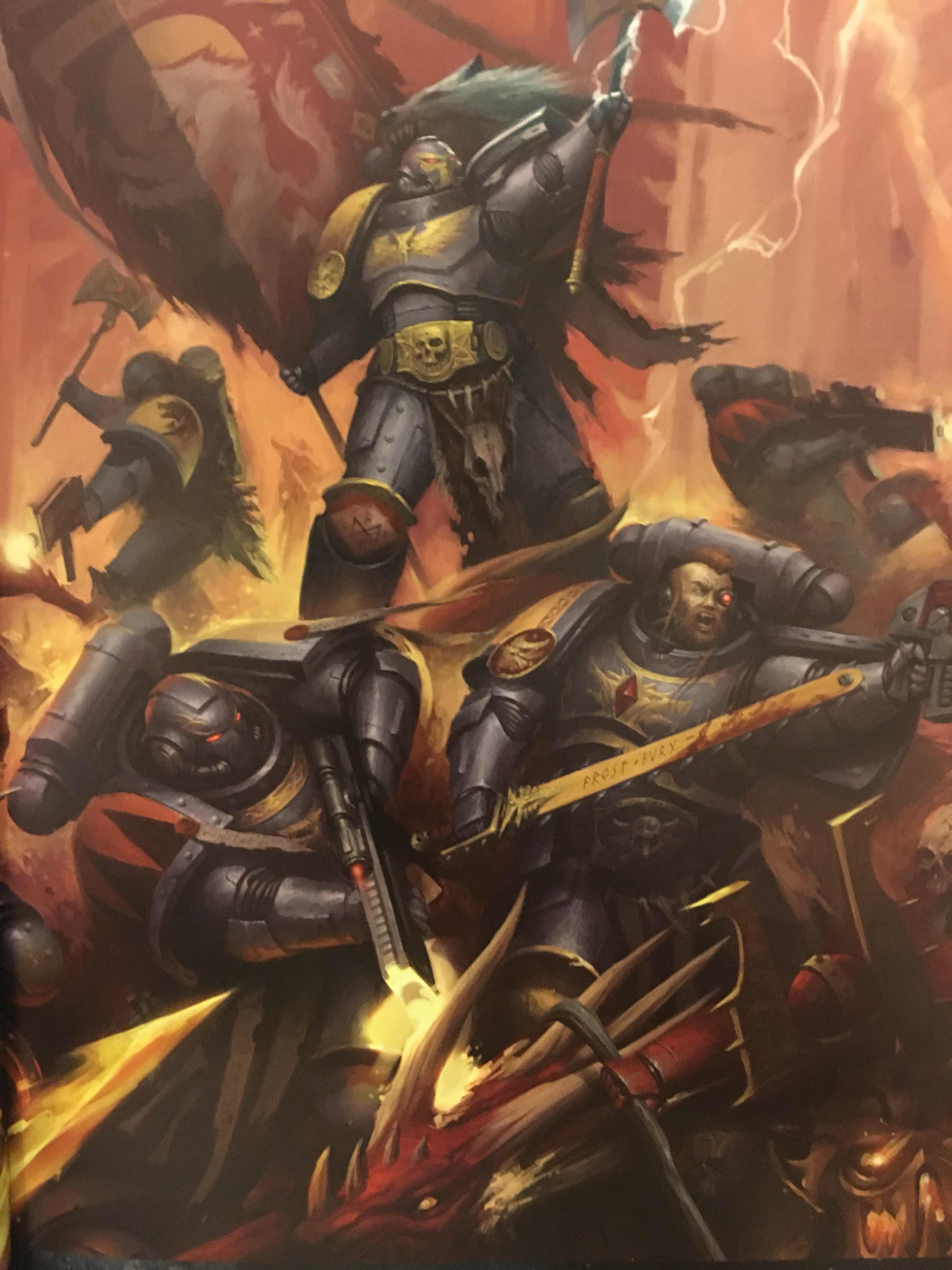 Background.
There is a few brief paragraphs in the codex with enough information to tell how they were integrated into the Space Wolves Chapter upon delivery by Roboute Guilliman, as well as references of them being recruited from Fenrisian stock. It’s pleasing enough, that should I start 40k Space Wolves again I can imagine doing them almost primarily Primaris. Apart from that, the Background is pretty much the same from the previous Codex since 1994, with a few bits regarding their involvement in the Indomitus Crusade and 13th Black Crusade. The Great Companies are all the same as the previous book (with Sven Bloodhowl missing though). Ragnar is described as comparatively young, compared to the other Wolf Lords, though he must be getting a bit long in the fang now. Bran Redmaw, still unreleased from FW, but it does state that he is often seen leading packs of Wulfen and sometimes succumbs to the Canis Helix itself in the heat of Battle (soooo if Russ does come back there is hope he will have the option to go from Primarch to Wulfen-Primarch, and return at will). The Grimbloods are still my favourite Great Company, and it’s good to see he is ticking on.
As with previous Codex there has been information on Successor Chapters, but not in this book. Yes we all know the Wolf Brothers were wiped from existence, but their is another which has been mentioned in Dark Imperium (A Primaris successor Chapter) called Wolfspear from the Ultima Founding. I was hoping to find information in this book regarding them, but sadly I have not. I do hope that when they are fleshed out, that they are Vlka Fenryka / 6th Legion Grey.
There is a very good 4 page timeline of the Space Wolves from the Horus Heresy to Saga of the Maledictum, once more it leaves the potential rediscovery of Russ at 1 minute to midnight. 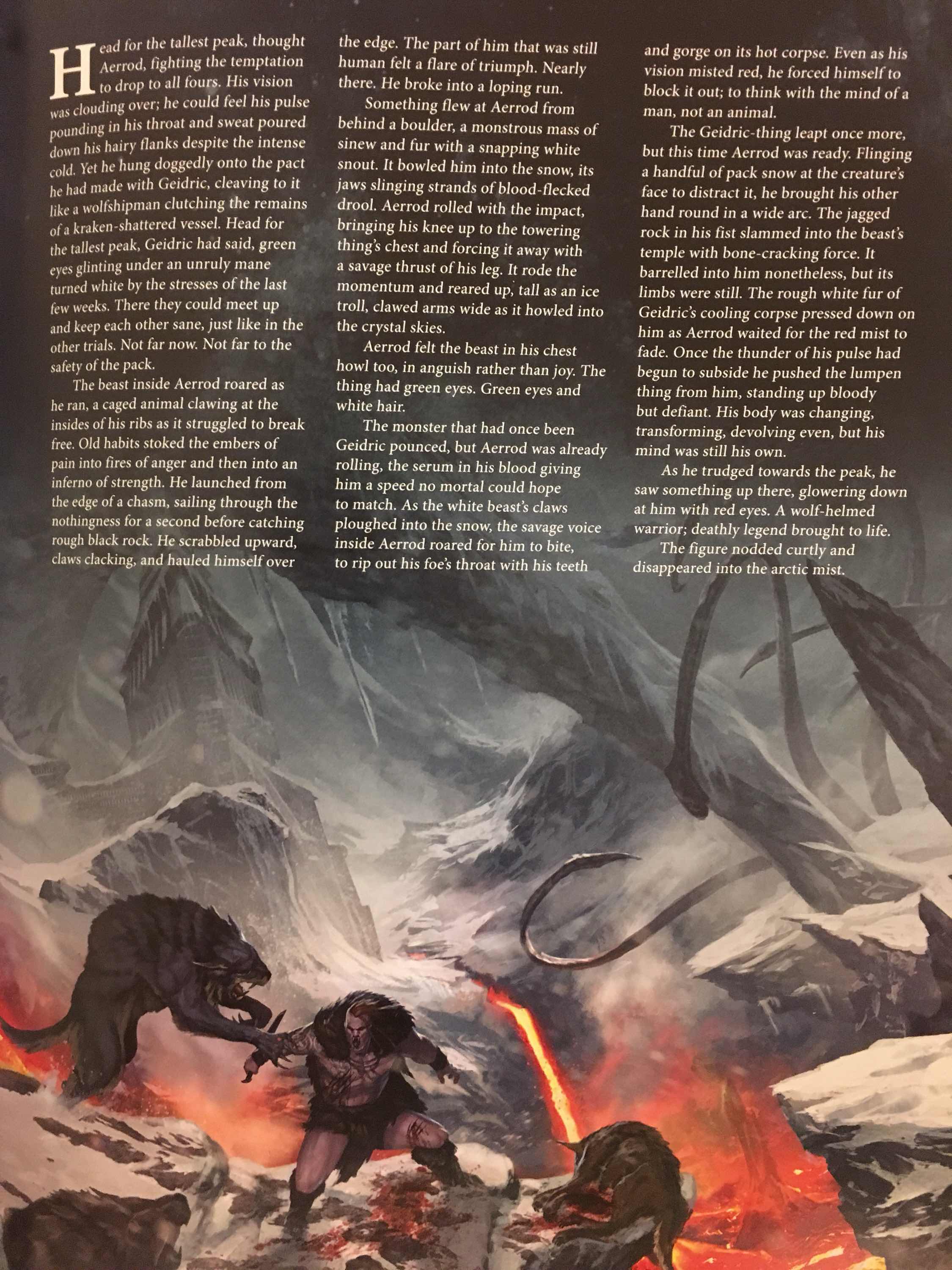 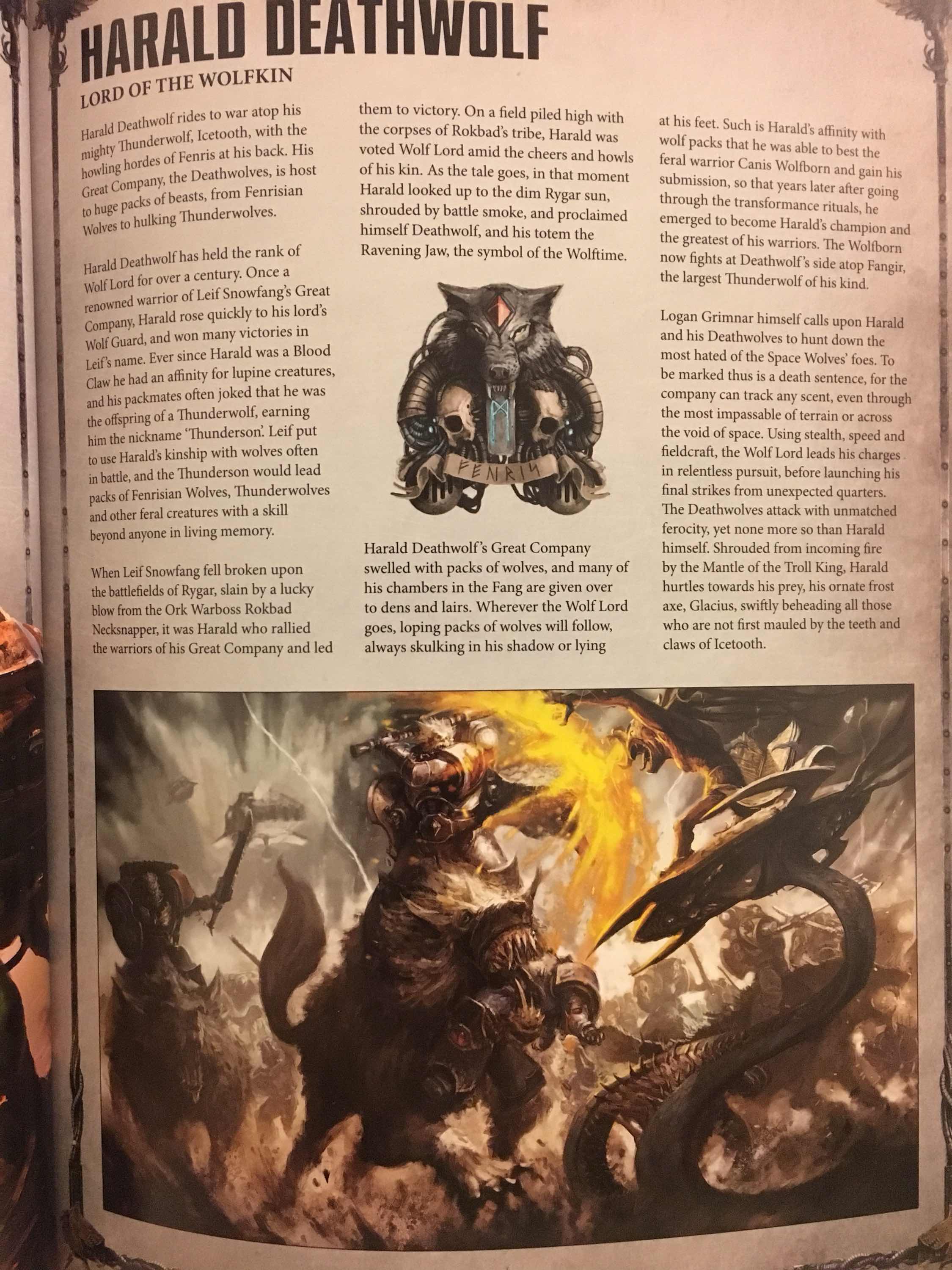 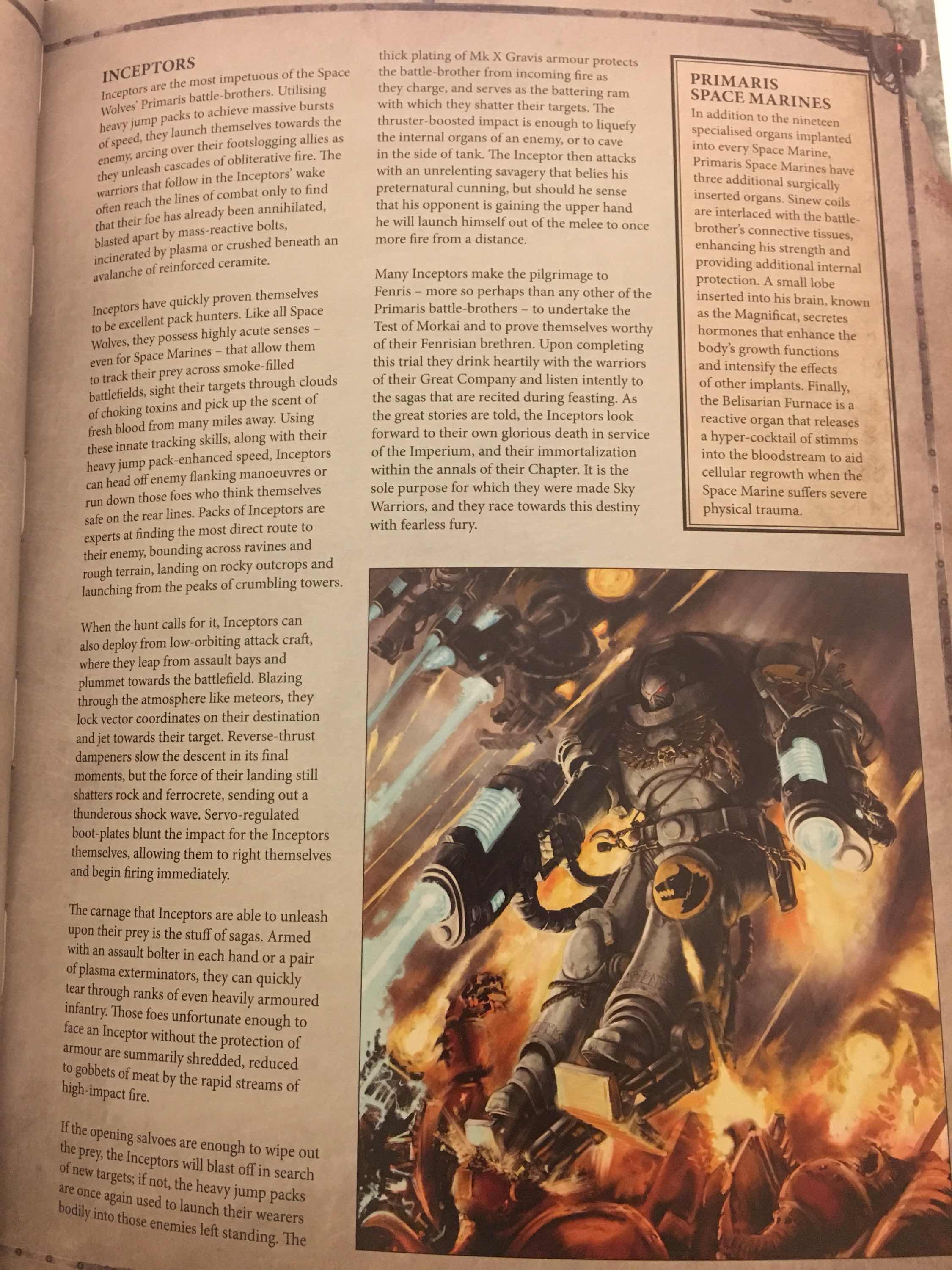 The Primaris contingent do look great in Space Wolf colours, especially when the new upgrade pack is used.

Bjorn can be fielded with a choice of ballistic weaponry from the Helfrost cannon to the classic Assault cannon. To be honest, I would have like it if his chassis had been replaced with a Redemptor Dreadnought. He is a good buff to Units within 6” of him where they can re-roll hit rolls of 1. 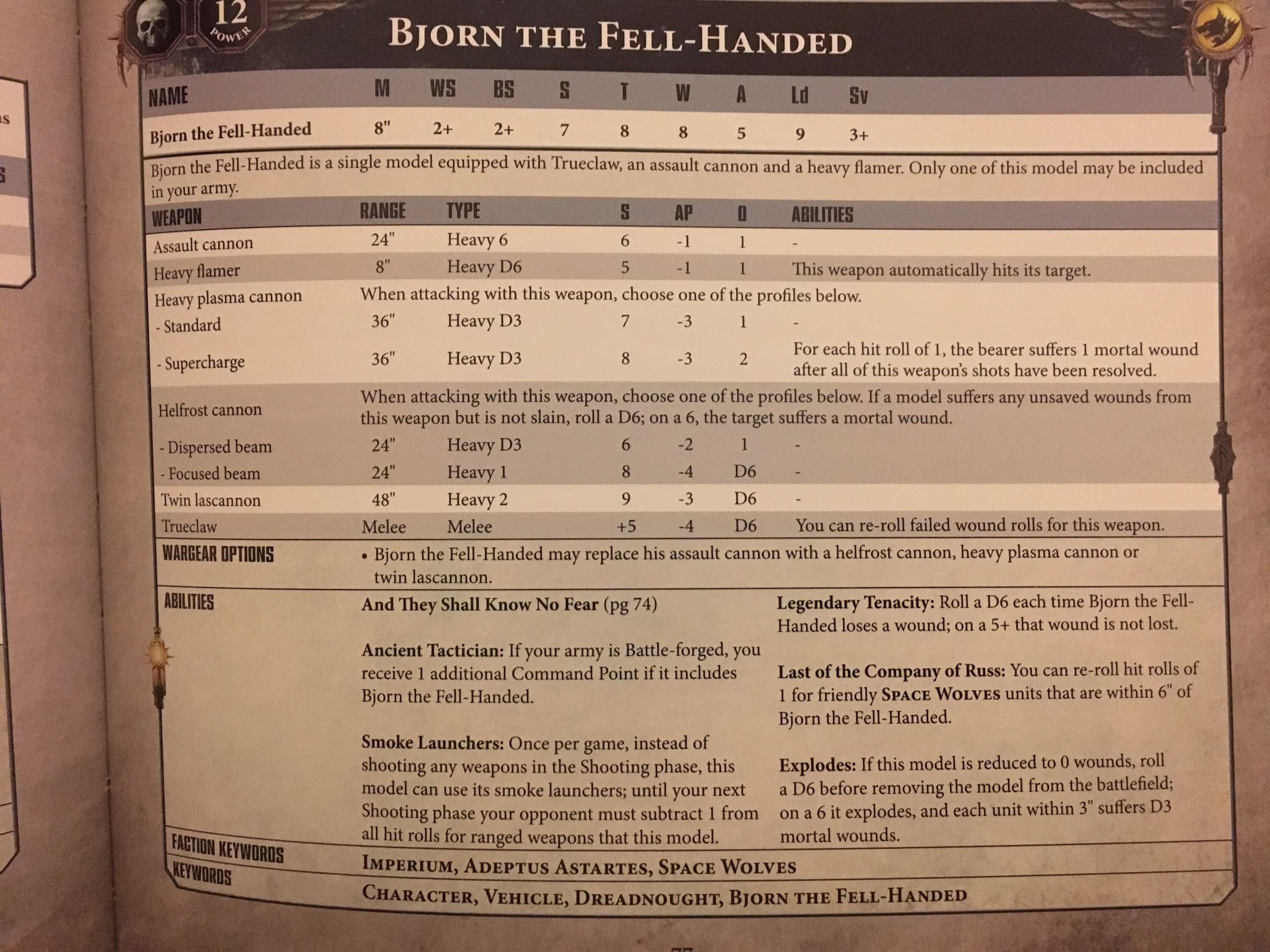 Ragnar is accompanied by Svangir and Ulfgir. They have a BS for some reason compared to the Fenrisian Wolves (not sure why). He is pretty useful in a scrappy frontline with his heroic intervention boost. 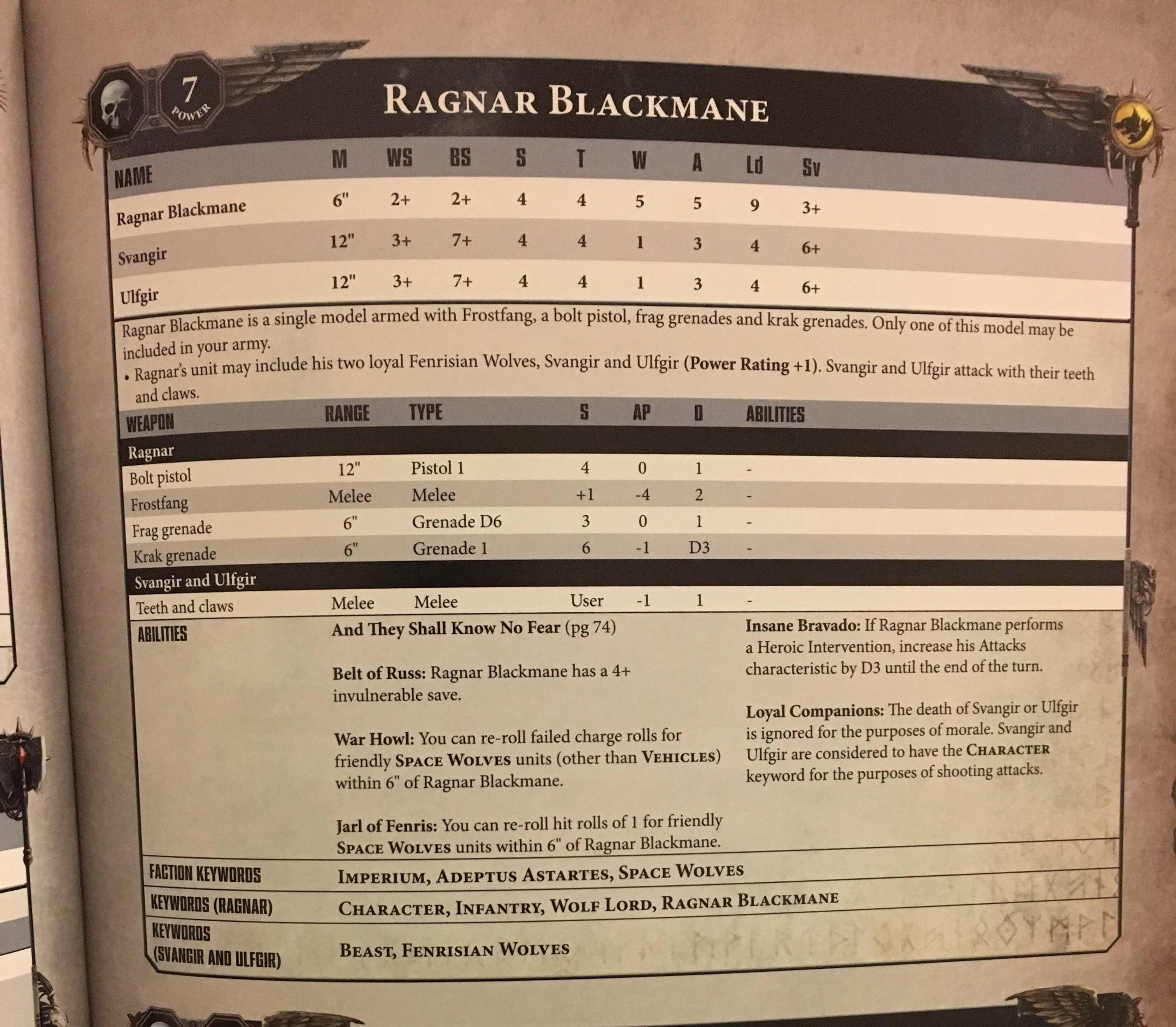 Their are 6 different options for designing your own Wolf Lord, including Primaris Wolf Lord and Wolf Lord in Gravis Armour. For some reason they cannot get their hands on Frost Melee Weaponry like the standard Wolf Lord, even though they do have options for Power Swords. That is a bit of anomaly. But, as it looks like there has not been any new Wolf Lords for a long time, I guess if we are following fluff this doesn’t matter.
The same can be said for the Wolf Guard and Primaris Battle Leader. 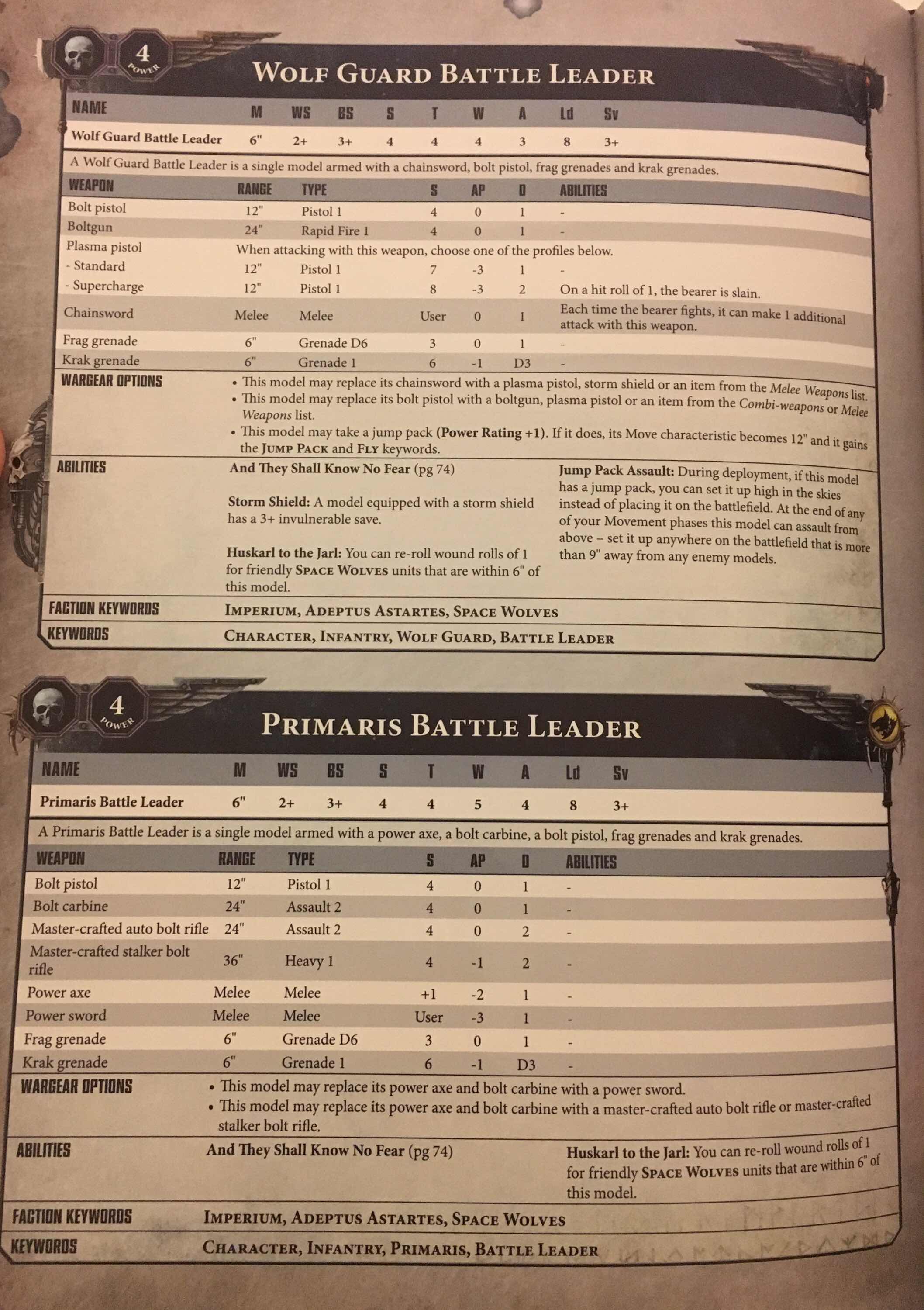 The Blood Claws are still a deadly troop choice, especially with Beserk Charge, but best to take a Wolf Guard Pack Leader or they must charge an enemy in it’s charge phase of possible to do so.
Intercessors are just Intercessors. They don’t feel like they are the new and upgraded Grey Hunter of old. Fair enough they would be running around with 3 attack dice as standard if they did, but I feel they should have been made to feel like the new Grey Hunters, even if it meant upping the points.
Long Fangs have a higher Leadership than Hellblasters which is odd as they are their inevitable replacements. It may be down to them just arriving and not currently being Long Fangs themselves yet.
Unfortunately the Stormfang Gunship cannot transport Primaris either. I understand this with many other vehicles, as it is a push to move the older Astarte’s vehicles towards retirement so new chassis and vehicles can be released for the Primaris range, but it is a shame that some Chapter specific models like this would not be purchased by me if I was wanting to field a Primaris only force.
Relics of the Fang.
I was hoping this would be the place to go to put some bespoke or Storied Weapons into the paws of the Primaris Wolf Lords etc. Unfortunately they state that they are replacements for the Frost Sword (Krakenbone Sword) and Frost Axe (Black Death). They are both great weapons too.
The Armour of Russ: well in general I have a bit of a bee in my bonnet about this. Unless I want my Wolf Lord to be walking round in what I can only describe as a 5 year old wearing his Dad’s clothes, I think this should be left back in the Aett where Russ can collect it when he is good and ready for Wolftime.
Warlord Traits.
Thankfully GW were awesome off the gate in replacing the Warlord Traits. The ones in the book are already obsolete. Saga of the Warrior Born with Ragnar and retinue will be very deadly now and will force your opponent to do some tactical charging or dissuade him completely from assaulting your Blackmaned Wolf Lord.
Whilst Beastslayer will be great for Logan when he finally catches up with Angron again as it pluses 1 to each to wound Roll.
My summary.
It’s a good Codex and does what it says on the tin. You can field all of the units that have been introduced in the past, including The Trickster and Wulfen Dreadnoughts.
If you want to build a force which feels fully Fenrisian, it may be worth leaving the Primaris out entirely, as they could be painted in bright red with a Blood Angel symbol on the side and they would feel just as Fenrisian to me (ruleset-wise).
For me, I was hoping this release would have seen Primaris Grey Hunters and Primaris Blood Claws at the least. It does disappoint me that there is no typical Fenrisian Savagery to these troop choices even though they have “embraced the culture”.
I have never been a fan of Frost Weapons as they just seem so Marvel, but it is a bit odd not to see them hanging from a Primaris’ belt loop considering the regard in which they are held.
It feels like it is more of a placeholder/transitional Codex as it deals with Primaris coming in to the Chapter, but they have not totally meshed in yet. Looking forward to the next one.
Kaelo Rylanus
Posted by Kaelo Rylanus at 11:15