We have been fortunate enough to have been sent a copy of the new Stormcast Eternals battletome, and I wanted to share a quick review with you all. I will be going over some stuff that have already been released in previous battletomes, however I will do so briefly. 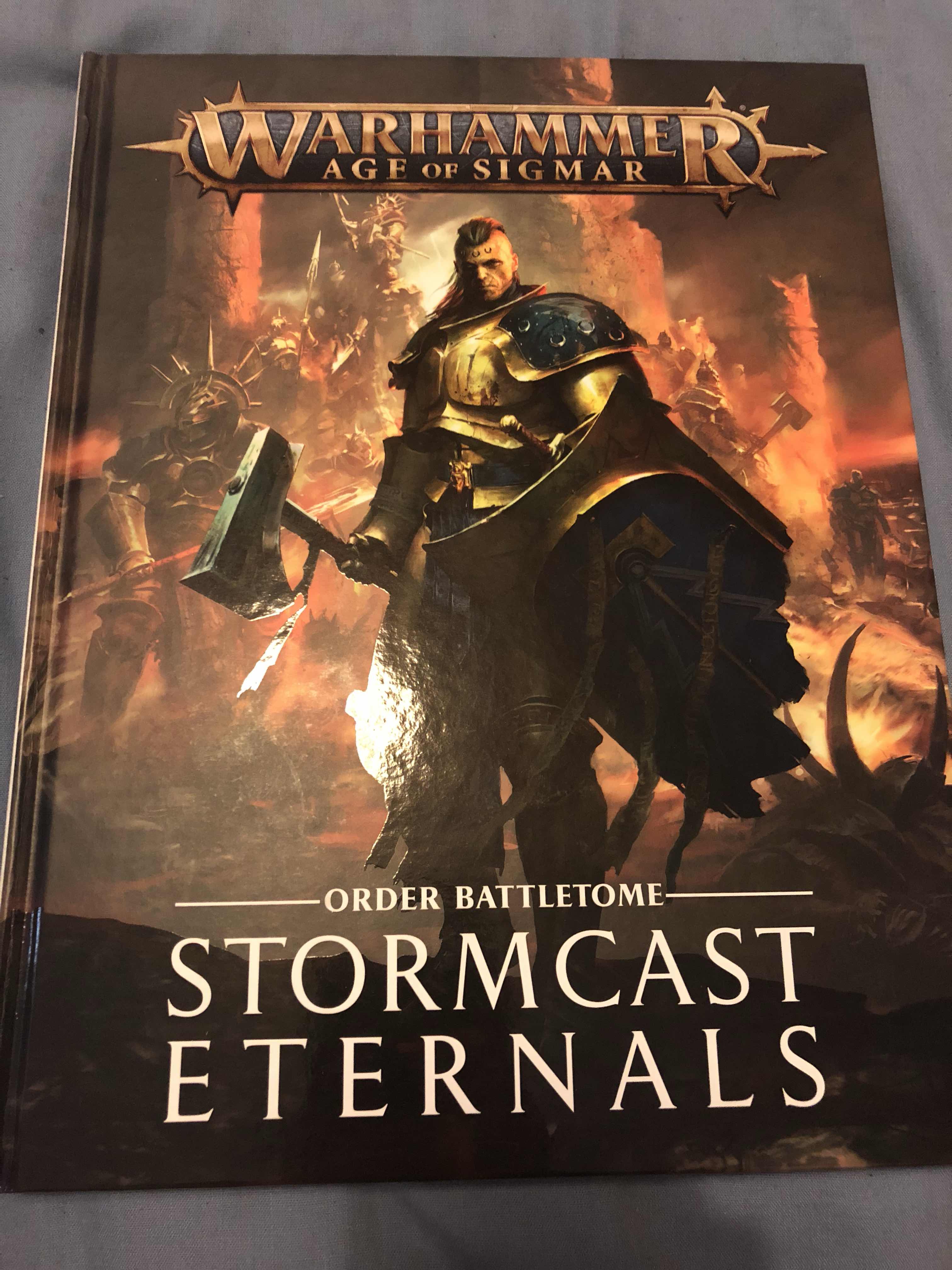 As we know, Stormcast were people who were hand picked by Sigmar, often moments before death in the Age of Chaos. These people were then infused with the power of Sigmar and then unleashed into the Mortal Realms to fight back Chaos. Whenever a Stormcast dies, his soul is taken back to Azyr on a bolt of lighting, and then reforged. The Stormcast that comes back however, has often lost a little bit of his humanity. These happens more and more each time they die. A very few Stormcast seem unaffected however.

The Stormcasts first objective, was to try and claim some of the Realmgates. This is now known as the Realmgate Wars. Durning this war, the Stormcasts were able to reform an alliance with Alarielle and her Sylvaneth, and fought back the forces of Nurgle in the Jade Kingdoms in Ghyran. They were even able to reclaim Ghal Maraz, Sigmars warhammer that he was tricked into loosing at the Battle of Burning Skys, by storming the Eldritch Fortress in Chamon.

The conclusion of the Realmgate Wars happened when the Stormcast attempted to reclaim the Allpoints - a nexus of Realmgate that allowed passage to all realms - from the armies of the Everchosen, Archaon. Although the Stormcast were not entirely successful, they were able to recover 2 vital gates. These were the Genesis Gate in Ghyran and the Brimfire Gate in Aqshy. During this time, 2 other dark forces began to stir, the greenskin tribes and the Legions of Nagash.

The Stormcast had reclaimed much of Aqshy and Gyrann, and small pockets in the other realms, and have been able to establish new outposts and cities which most still stand proud today. 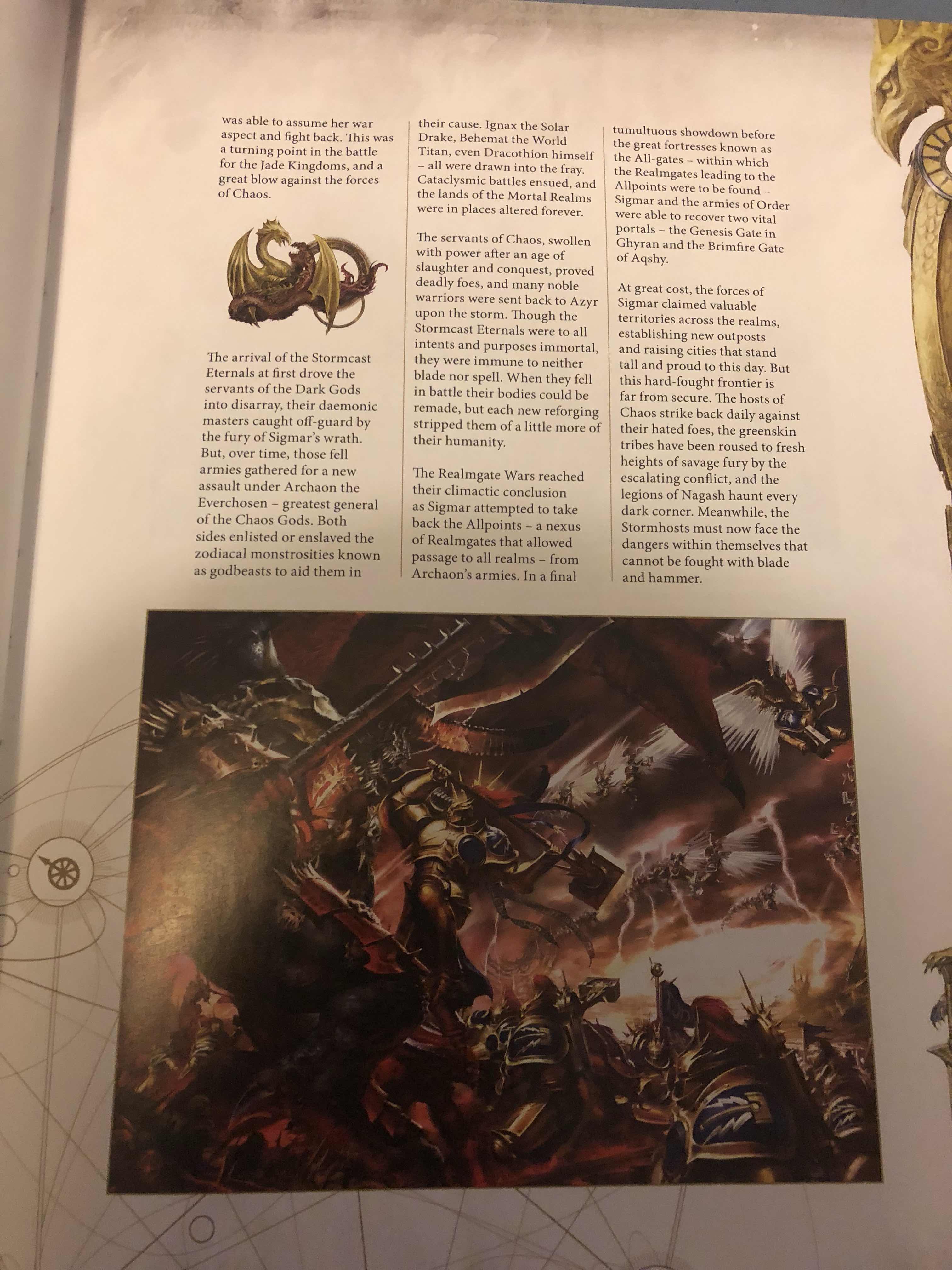 Now we get into some of the new fluff. As I mentioned before, the reforging of the Stormcast was not perfect procedure as it often lead to the hosts loosing a little of theirselves. As a result of this, and the fact that Sigmar is not able to oversea every reforging, Sigmar created a legion of Stormcast specifically to guard the souls of those who would reforged. The duty was to watch over each and every reforging process from start to finish, and to see to the unfortunate souls who did not fare well enough during the process to rejoin their Stormhosts in battle. This legion are known as the Sacrosanct Chamber, and are the Stormcast force included in the new Soul Wars boxset. The individuals in the chamber were once the most powerful wizards and priests from across the Mortal Realms. 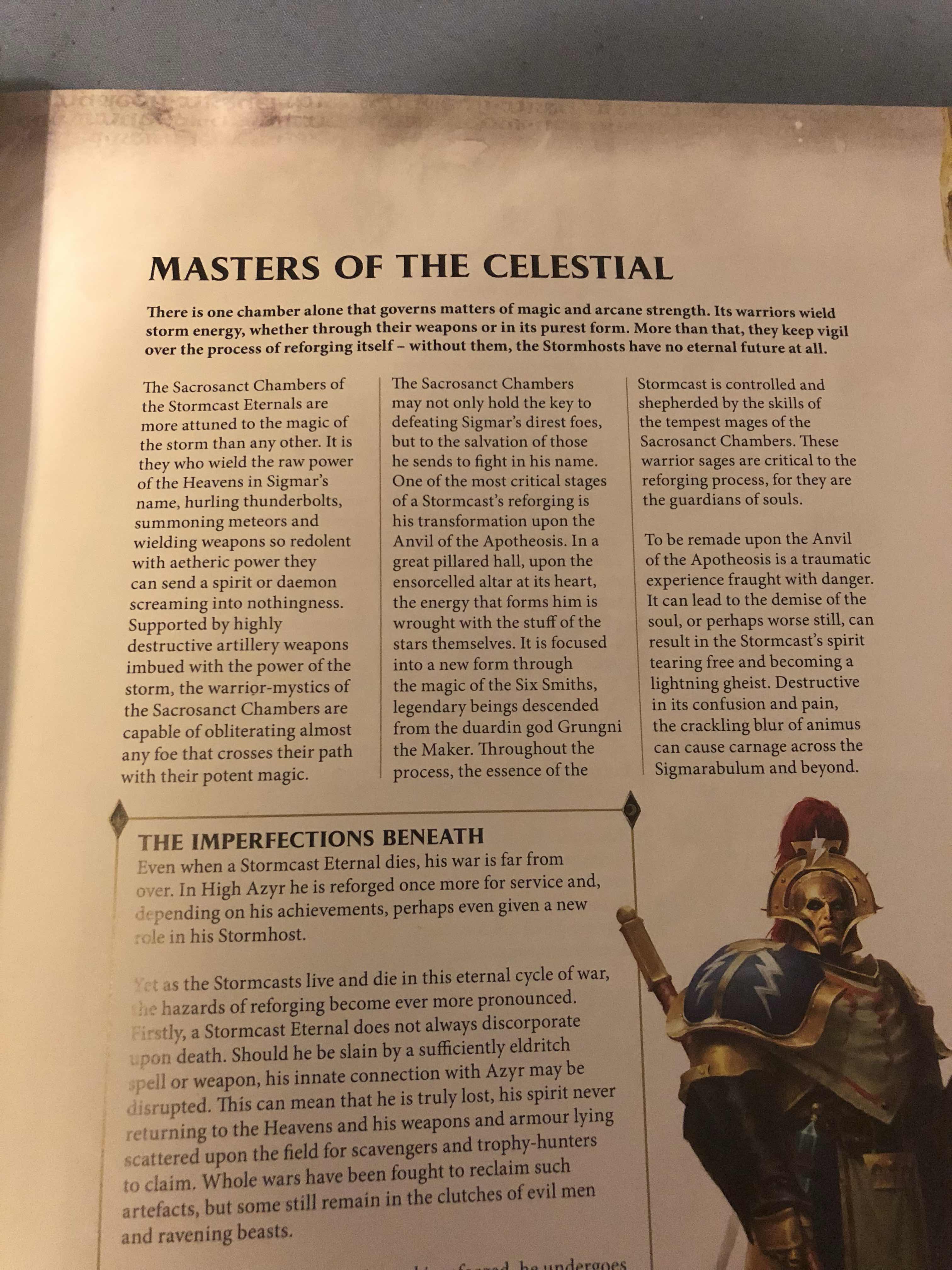 The Sacrosanct Chambers task was indeed a laborious one, as not even Sigmar could not foresee the heights of slaughter that would be reached. The souls that were too damaged to be remade, as well as the ones that were able to escape the soul forges, were bound into statues that lined the Avenue of Saints. Some people even claim they can hear screams coming from within the statues, which could mean they are acting more as prisons than a haven. No one has voiced this however as Sigmar does not suffer the inquisitive gladly, and as a god, cannot be judged by mortals. 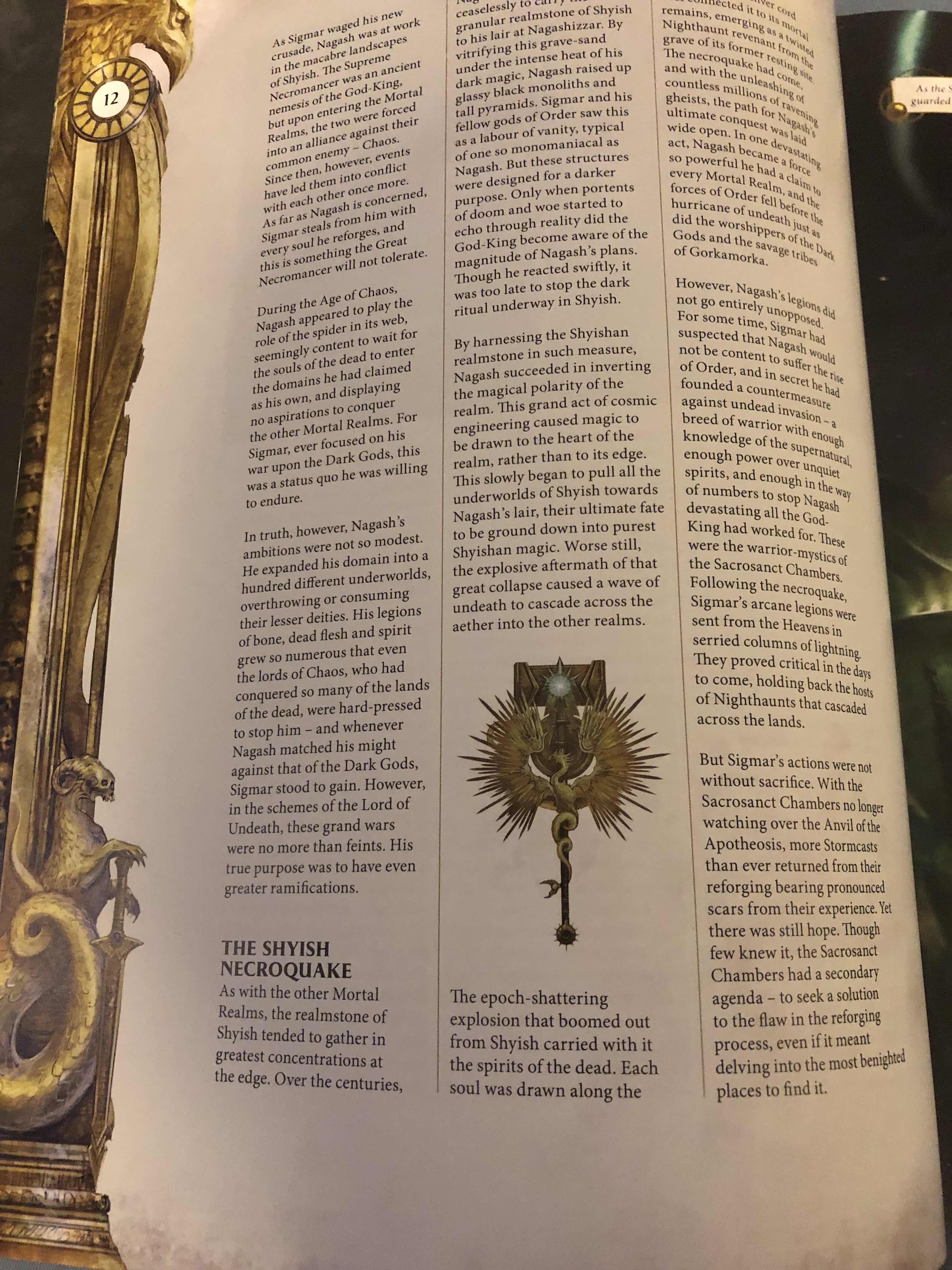 While Sigmar was waging his war with Chaos, Nagash was plotting his revenge against Sigmar as he saw him as a thief, stealing souls that were his by right. Nagash expanded his domain by overthrowing the lesser deities of a hundred different underworlds, swelling his forces so much that Chaos was not able to hold back the flow of undead in Shyish. This was however just a feint to hide what Nagash‘ plans really were.

Nagash ordered Shyishan realmstone to be brought to his lair at Nagashizzar and also for huge black monoliths and pyramids. With these, Nagash was able to invert the magical polarity, causing magic to be drawn to the heart of the realm. As a result of this, a wave of Undeath cascades across the aether into the other realms, which In turn caused millions of Nighthaunt to materialise. In one devastating act, Nagash became a force so powerful, that he had a claim on all of the Mortal Realms.

Sigmar had suspected that Nagash would not be contempt with the rise of Order, so in secret, he created a force designed to counter Death. This was also the Sacrosanct Chamber. So, following the Necroquake, Sigmar sent this chapter to hold back the hosts of Nighthaunts that roamed across the realms. However, since these were no longer about to oversee the reforging process, this meant that there was a huge increase in the chance that reforged souls would go back to battle carry scars, both physical and mental. Therefore, the Sacrosanct Chamber also has a secondary objective, and that was to find a solution to the flaw in the reforging process.

The Battletome then goes on to explain a bit about how the Stormcast go about building their strongholds with the help of the Dispossessed which is pretty cool. Not only do these act as defensive positions, but the Lord-Ordinators have created metaphysical links between the Stormkeeps and the underspires of the Sigmarabulum known as Star Bridges. This helps Stormcasts who have been slain near the Stormkeeps, to be swiftly transported back to Azyr to be reforged much quicker.

Next up we have the timeline, which is mostly the information we already know, however, there are a couple of new bits added. One of standouts for me is the Resurrection Crusade. This is the name given to the Sacrosant Chamber trying to reclaim land in Shyish lost during the necroquake. I would not be surprised if this campaign will feature in a series of novels by Black Library, or even new campaign books.

The Battletome then goes into great detail as to the structure of the Stormhosts, which is well worth a read. There is also mention of new Chambers which are not currently in use. These are called the Unopened Chambers. Could this mean that there are more Chamber releases on the horizon?

There is a huge amount of information about different Stormhosts, each units and a few hero’s. Most of this has been included in previous Battletomes, but there are still well worth a read.

There is also the usual painting guides. 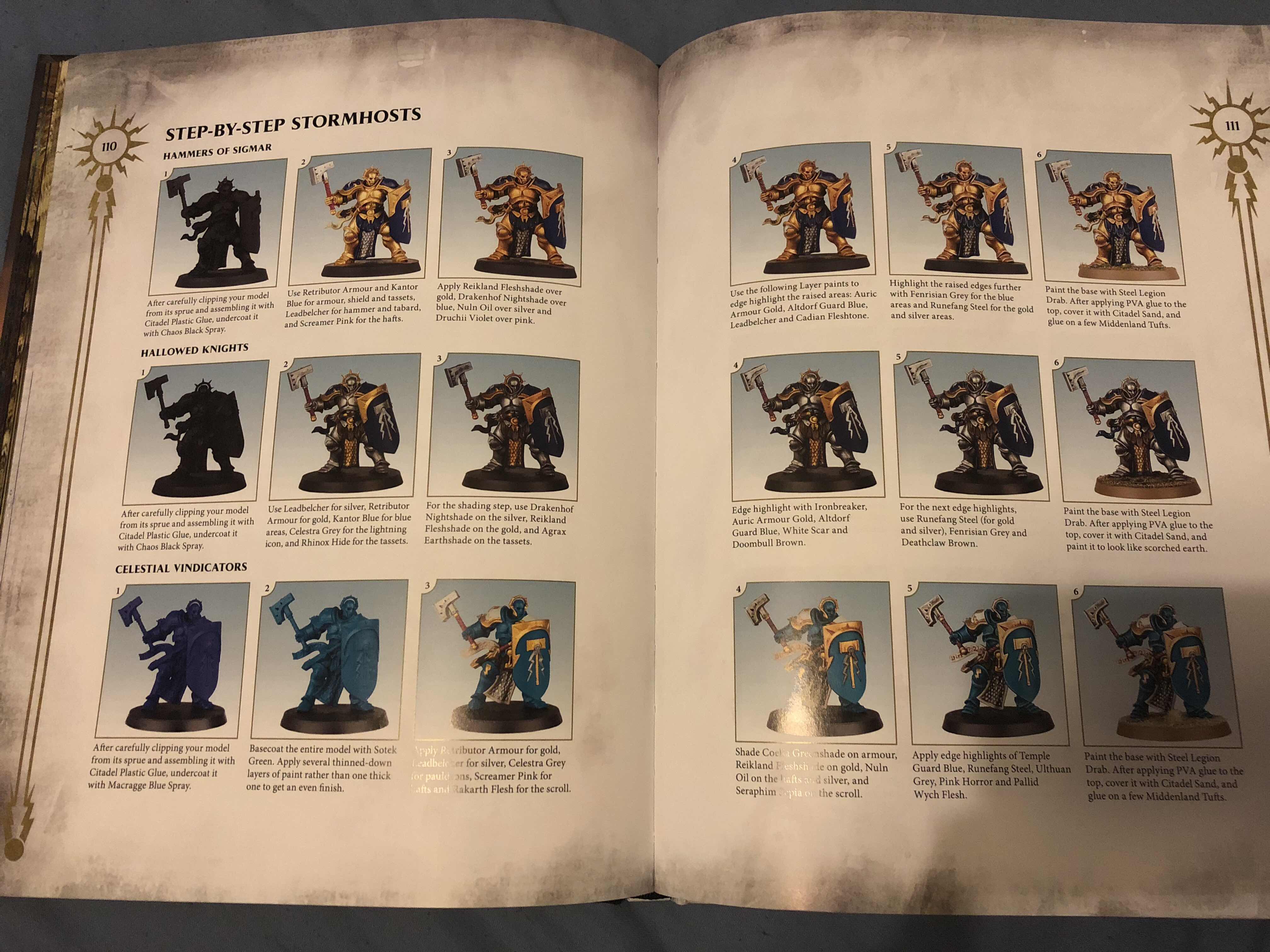 Now we finally get to the actual rules.

First up is the command traits called Aspects of Azyr. There are quite a few good ones to chose from, my pick however is Shielded by Faith. This grants a 5+ invulnerable save to mortal wounds. 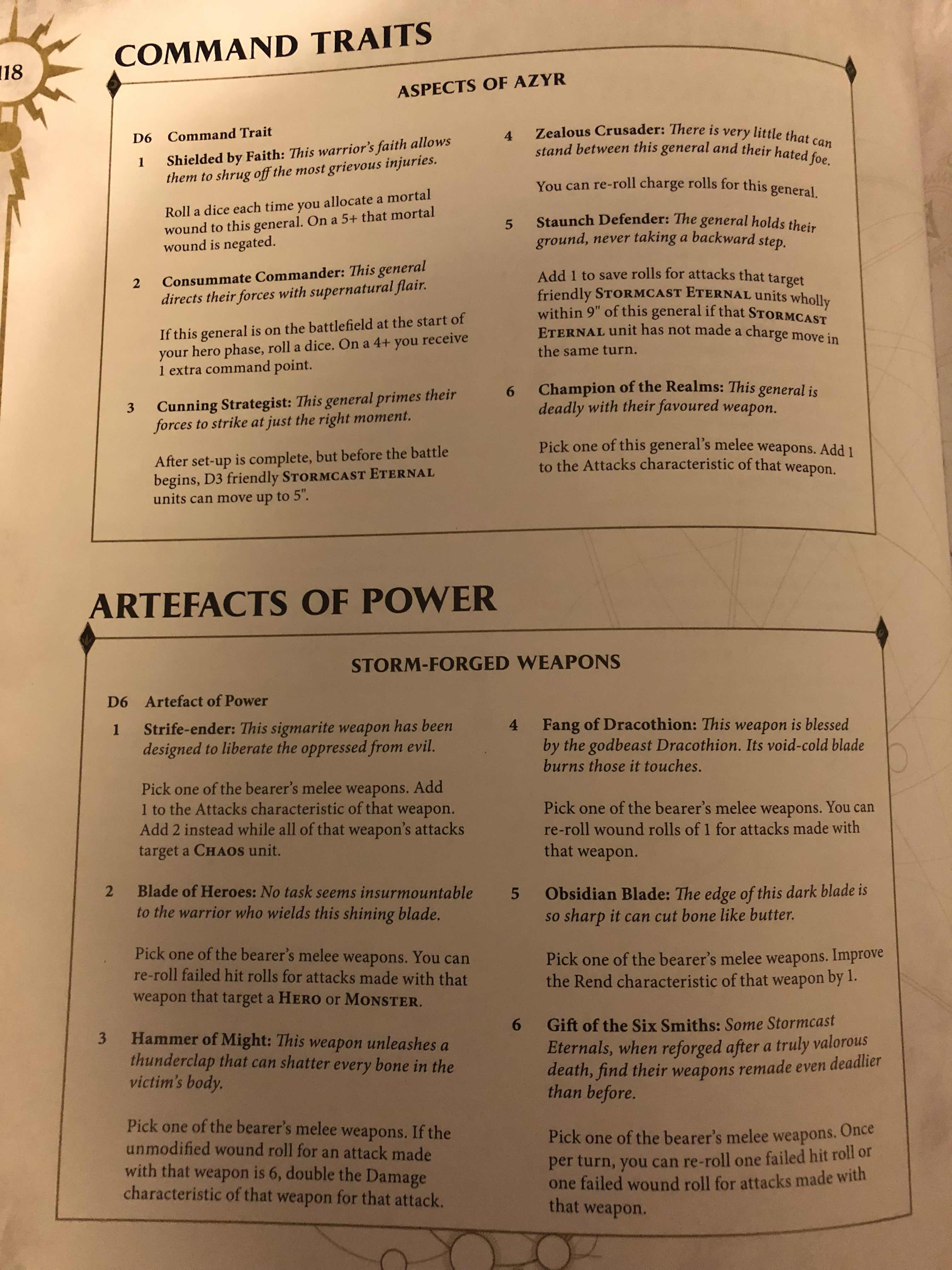 Next up is the Artefacts of Power.  There is an incredible 30 to choose from. Some of which any hero can take, other are specifics to certain leaders. Looking at the ones that only the new Sacrosanct leaders can take, I really like the Scroll of Condemnation. This lets you add 1 to wound rolls for attacks made against an enemy hero. This would be great if you use this artefact in an enemy hero, then have your best ranged unit fire everything they have at the hero.

With the introduction of the Sacrosanct Chamber, of course we would have done new spell available. Most of these involve inflicting mortal wounds on your opponent, I partially like Azyrite Halo. With this spell, you pick a Stormcast unit within 12”. Any save roll of 6 made, inflicts a mortal wound on the attacker. This could be a good spell to cast on a unit on an objective, making your opponent think twice before attacking them. 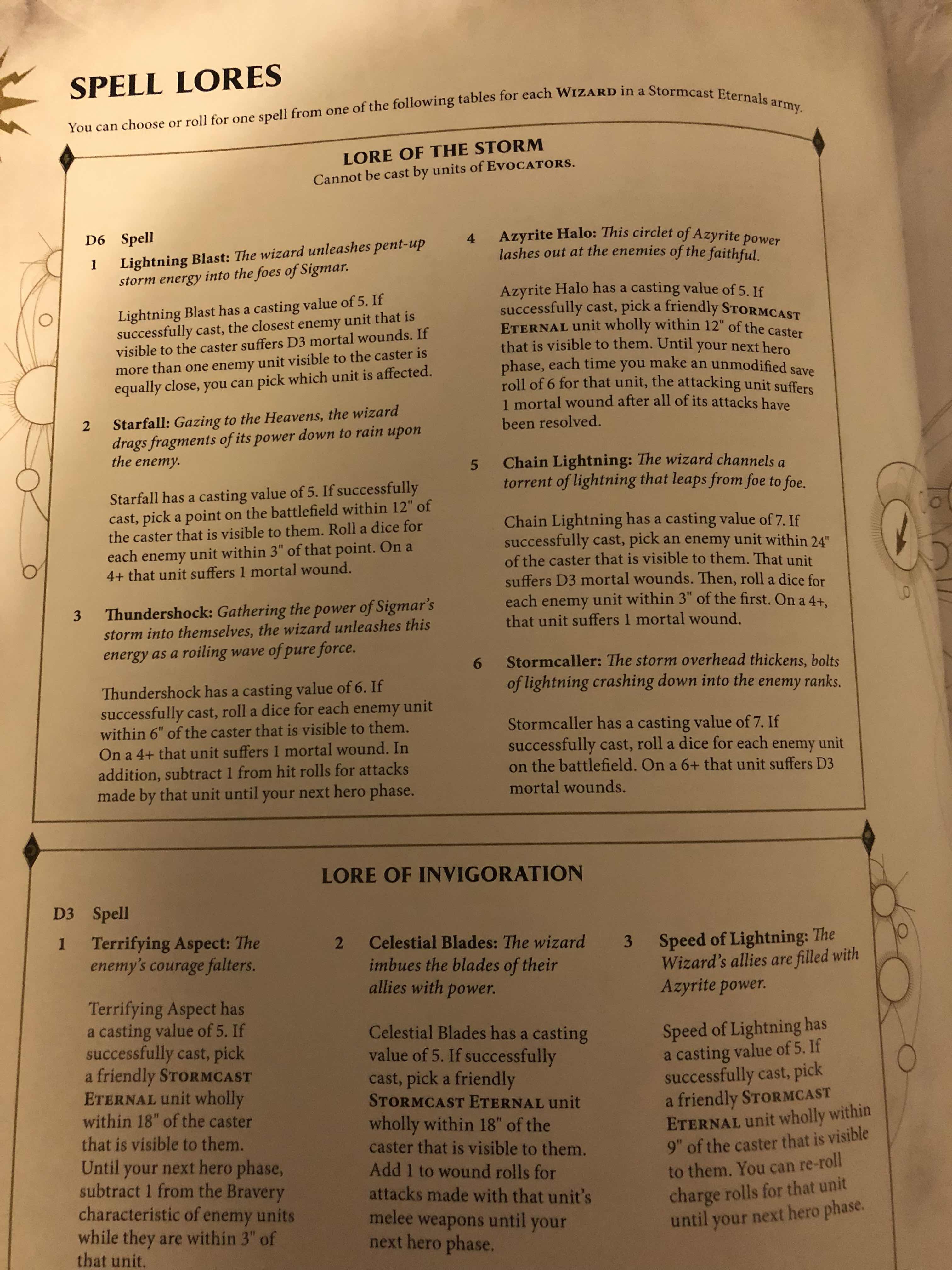 Priests are also able to select certain prayers to do. I like Translocation. This slows you to move a unit to anywhere on the battlefield more than 9” from an enemy model. 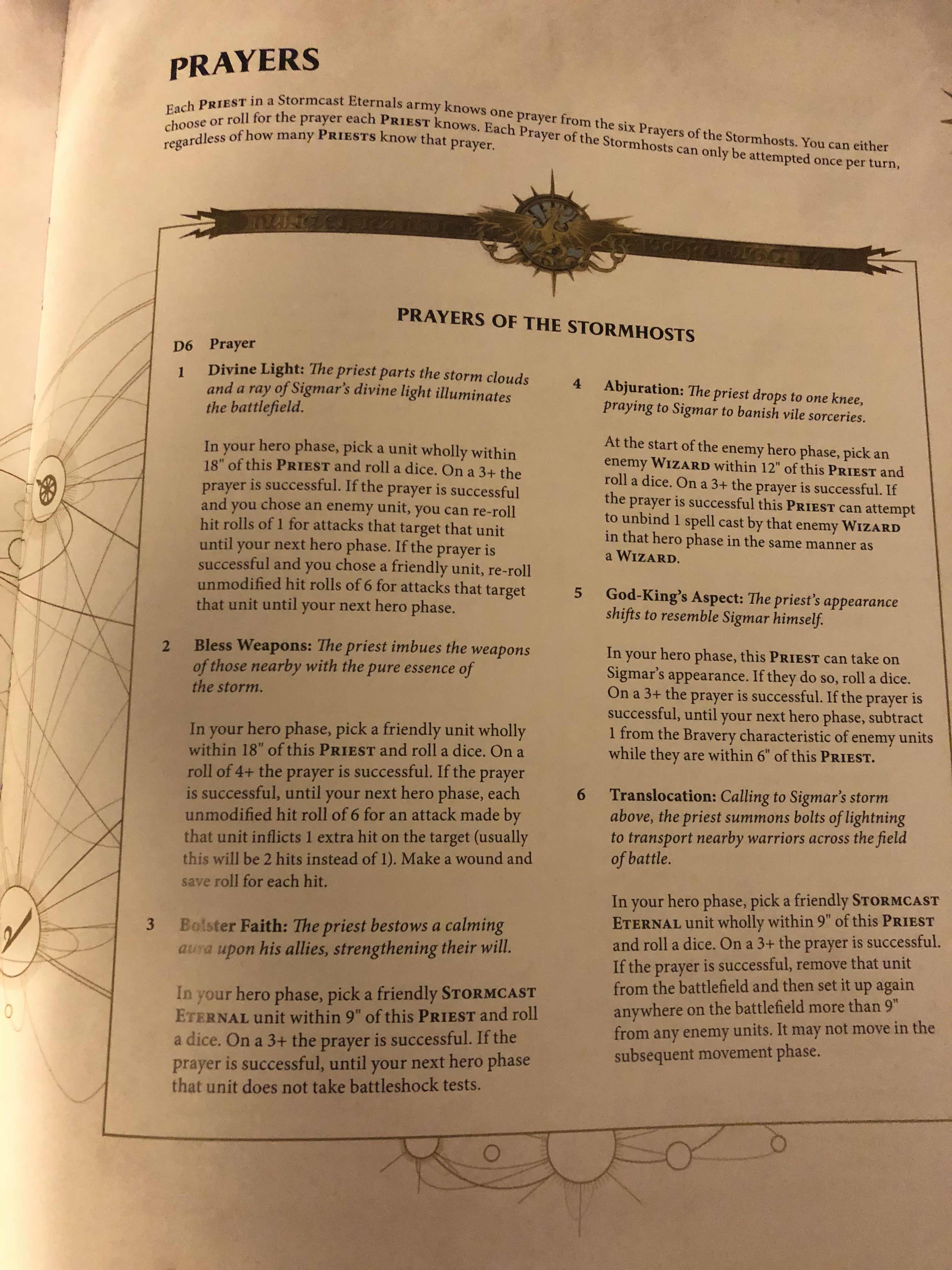 There is a load of Mount Traits to pick from depending on what mounts your hero is riding. 3 for each to be precise. 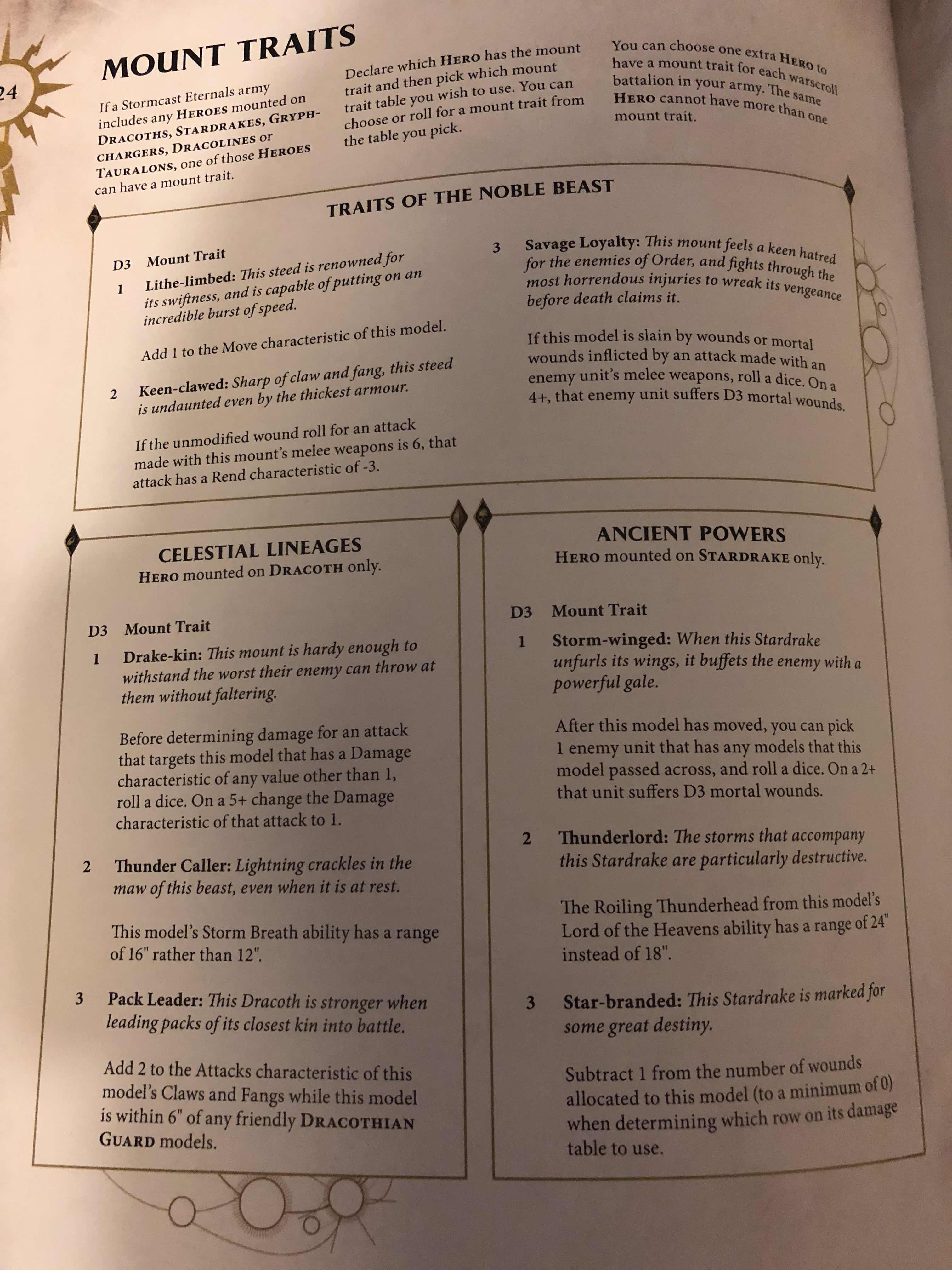 On to the Battleplans. There are 2 in this book, and both of these are the Stormcast trying to prevent their opponents from escaping the battlefield. 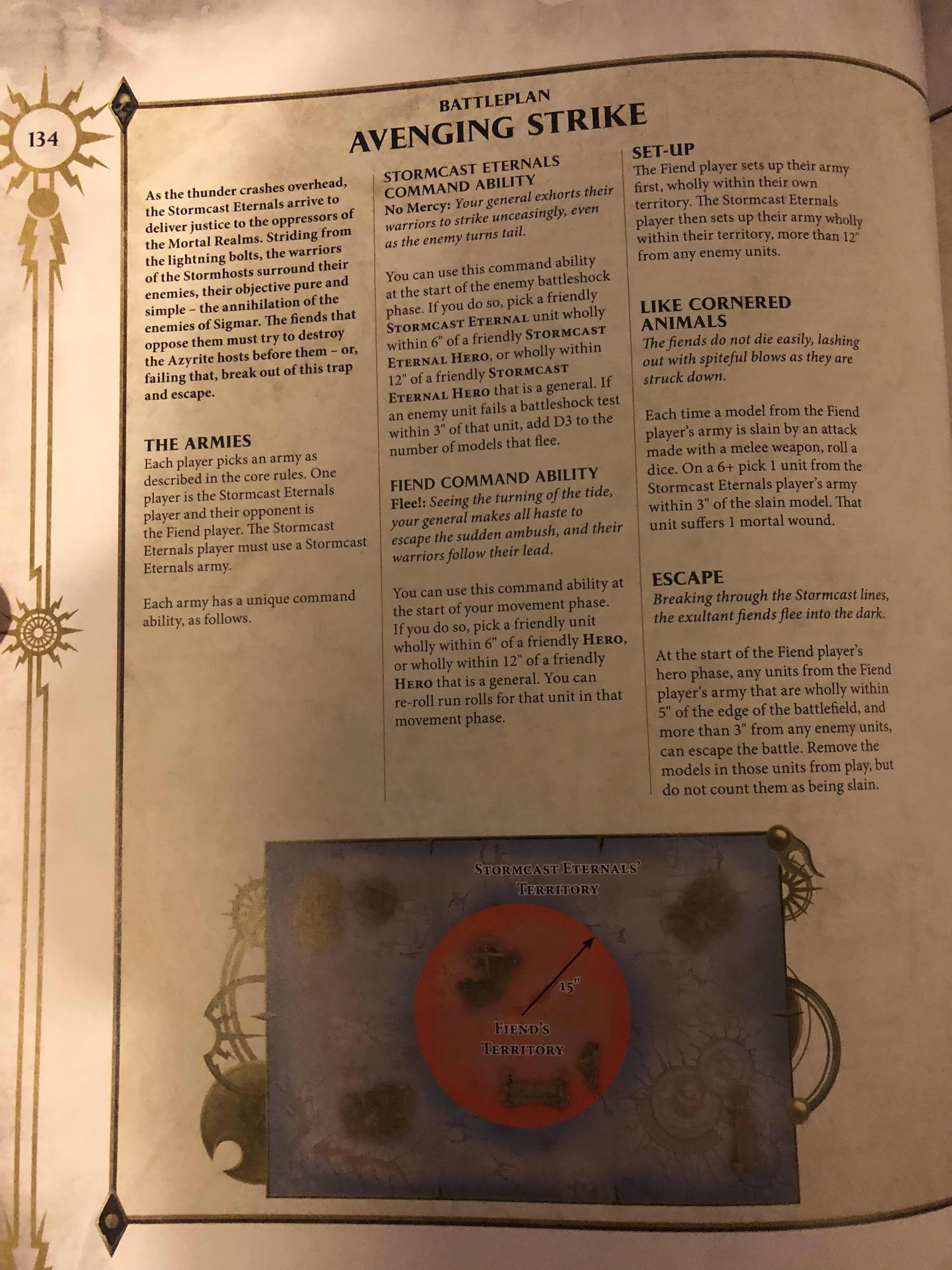 There is of course the normal Path to Glory section. 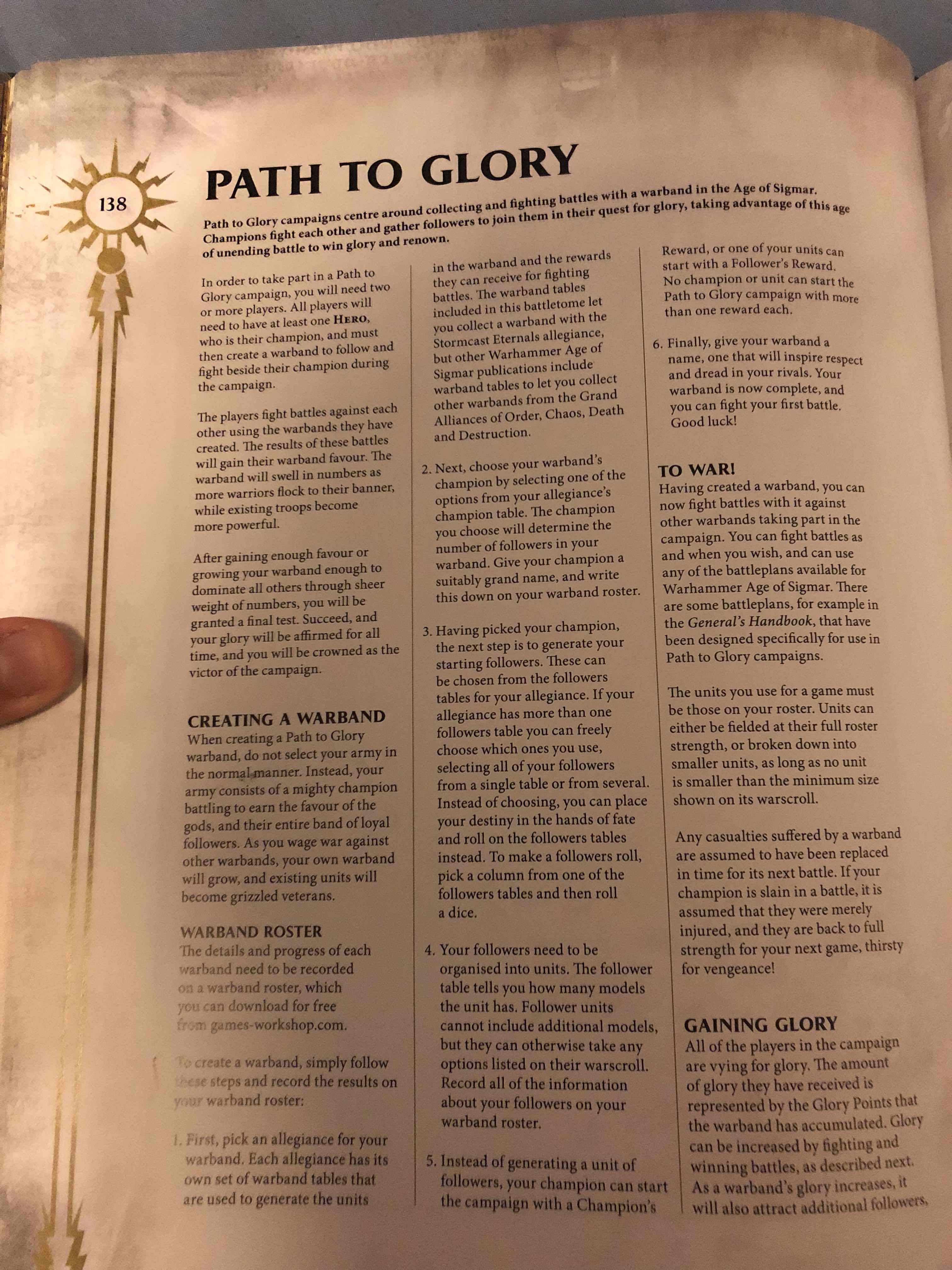 There are Warscroll Battalions for each of the chambers, so of course i has a look at the new Sacrosanct Chamber. The only ability that this battalion gives, is that the Lord Arcanum can cast 1 additional spell. However, with the focus magic in the new edition, I’m sure this will be useful. 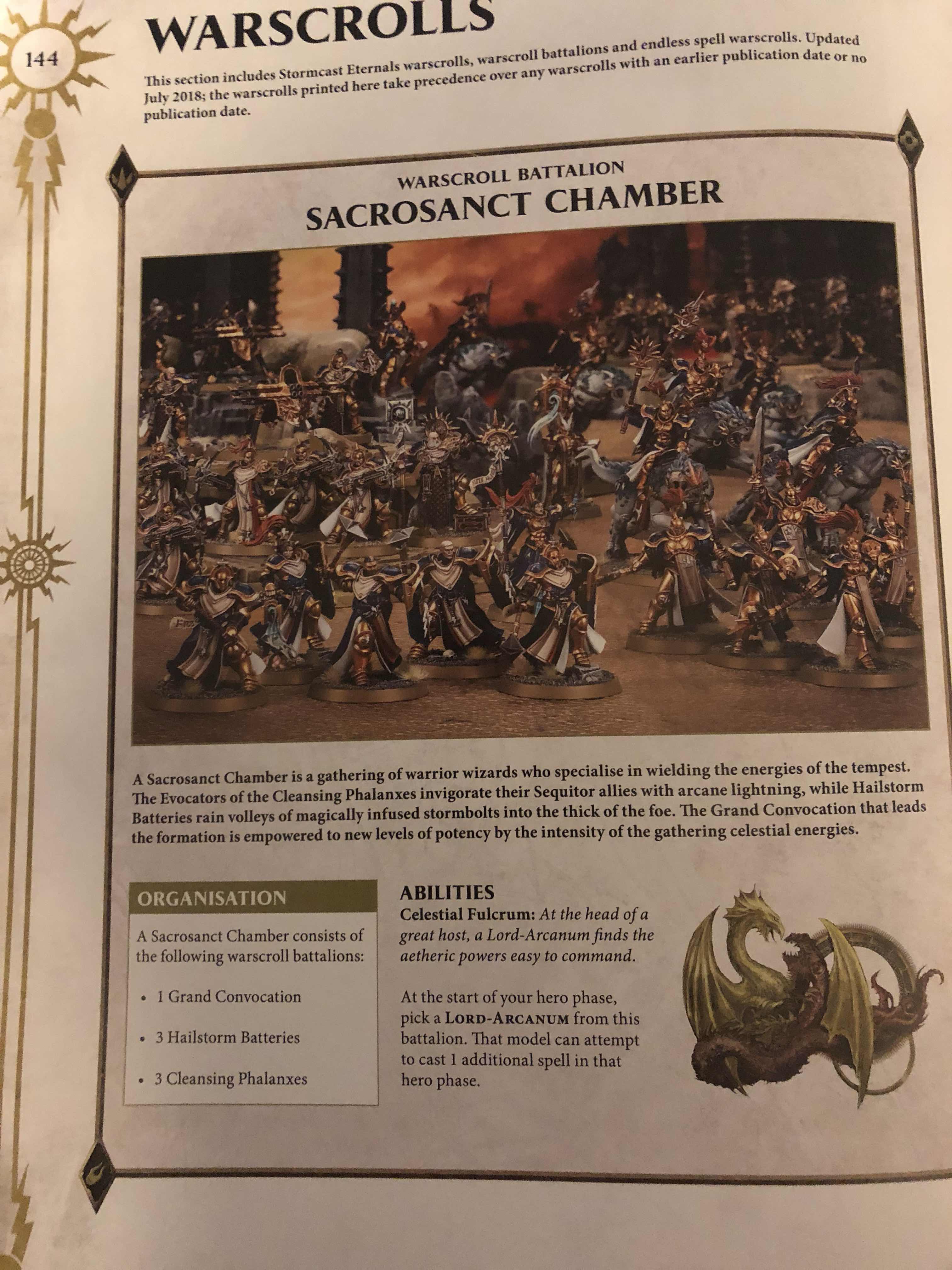 All in all, I do really like this release. There is so much background and lore included, that it really helps to flesh out the Stormcasts and I am very excited to see how the new chamber will do in battle