Hello again everyone,
Again apologies for the lateness of this review, moving house and starting a new job at the same time is quite stressful!
But it’s part two of the delayed Slaves to Darkness review, so let’s have a quick look at another faction in the Cabalists!
So at the start of your hero phase you can select one Cabalist Wizard to attempt a ritual 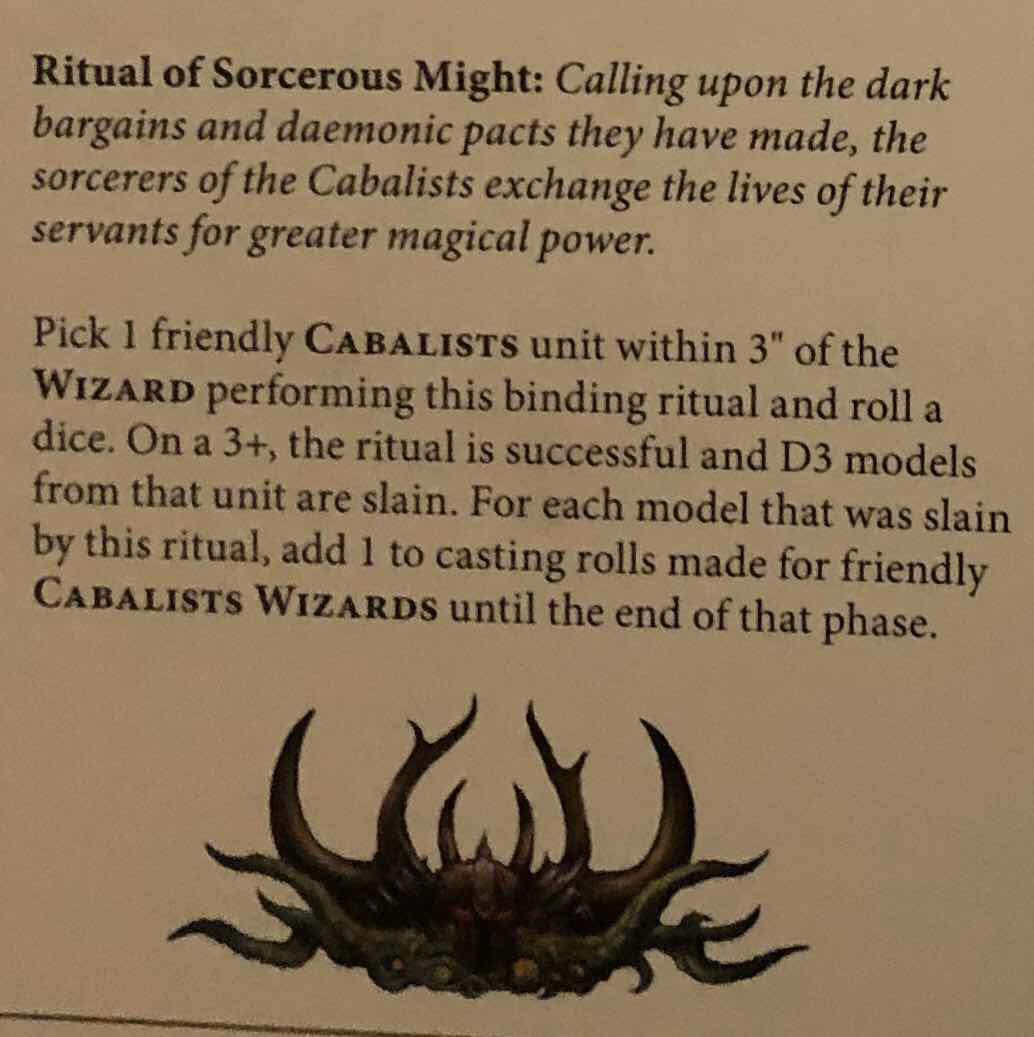 Like the herd stone for the Beastmen you get to pick an unfortunate group of cultists and sacrifice them to the dark gods for an improved casting roll!
So potentially a +3 to cast is excellent and with some of the spells we looked at in part 1 available it’s a pretty great way to consistently get spells off.
It is at a cost though but for 70pt cultist unit I’d say it’s worth it.
With the alternate Ritual of Corruption you get to again murder up to three cultists in exhange for a 3, 6 or 9 inch move on an endless spell.
I’m sure there’s a tonne of use for this, possibly being able to move an endless spell twice in a turn and doing double its damage.
It also means you could move the endless spell even further into your opponents army making them have to dispel it or move it into their own units. 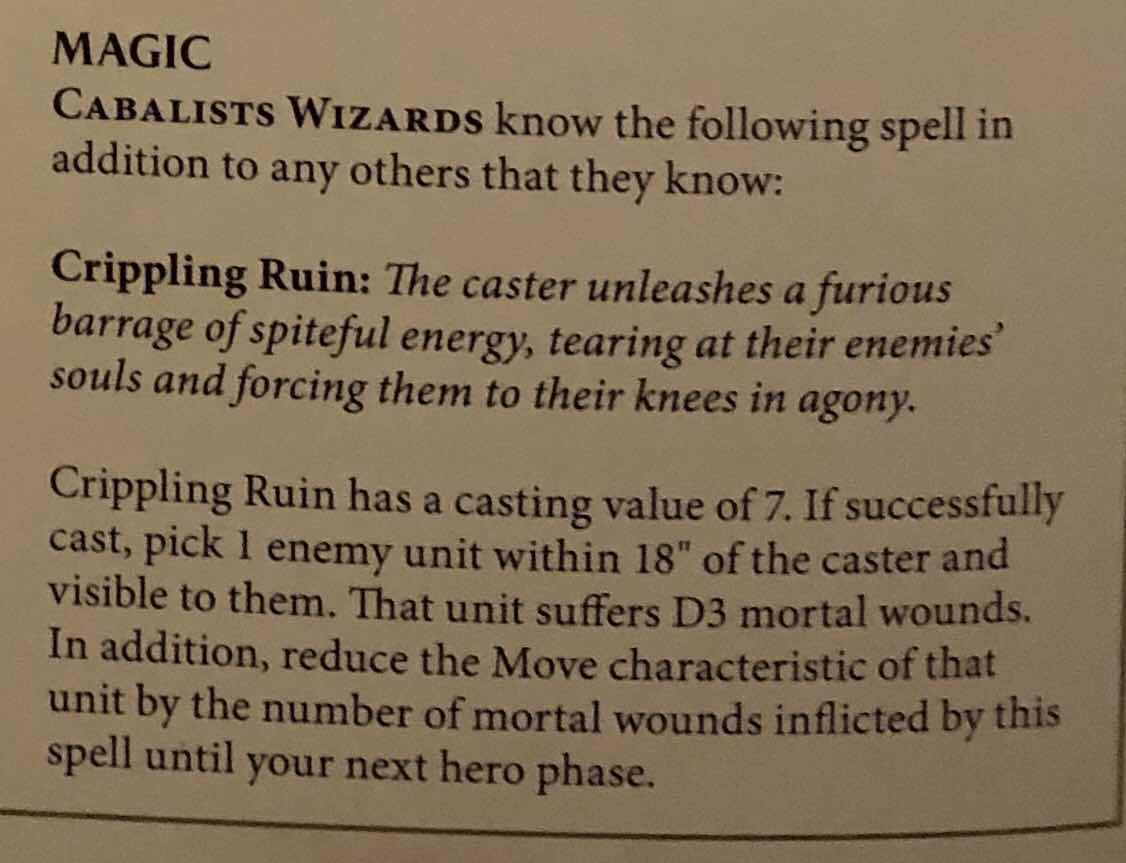 Another movement shenanigans spell. Getting this off could significantly hamper a unit with a low movement and in conjunction with Whispers of Chaos you can be stopping two enemy units from moving at all in their turn!
Command Traits
Not incredible command traits again but I’d be taking Mighty Ritualist so those rituals definitely go off when you need them too. 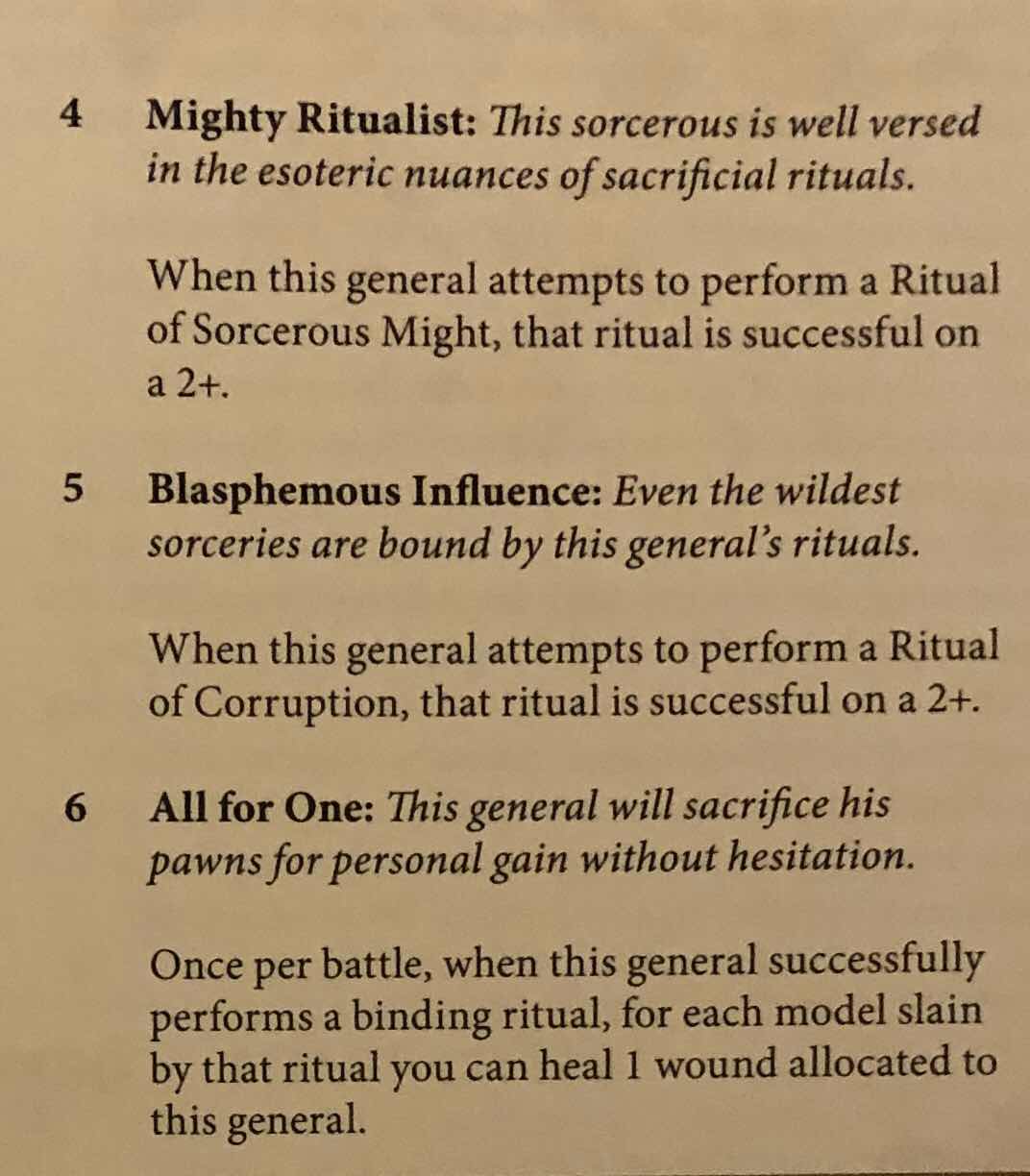 Artefacts
The artefacts are a little better. 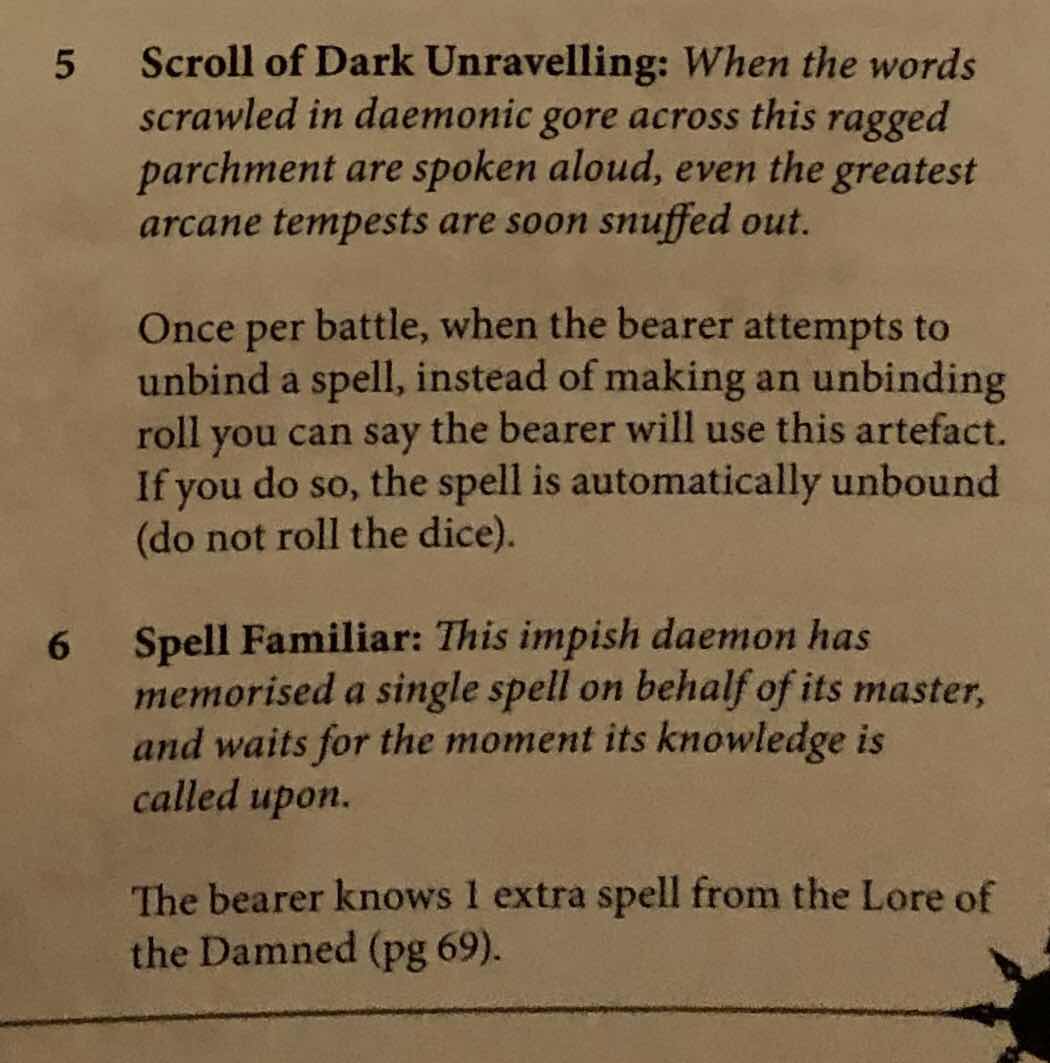 Having a dispell scroll is an excellent tool to have in your armoury, however having a Spell Familiar could really help you with having an extra spell to cast if needed. Just being able to know Mask of Darkness in case you need to grab an objective late game could be very tactically handy, even if it’s just used once a game.
Overall I think there are some great options in the Cabalist faction, using the increased casting potential and some great spells at your disposal you’ve got a great looking list on your hands. Adding onto that some punchy and fast units and I think there’s a list that reduces an opponents movement whilst using your speed and offensive power to destroy the rest of their army.
Warscrolls
Onto some of my favourite warscrolls then!
Chaos Sorceror Lord
For 110 points this hero is an incredible prospect. Only a one cast wizard but they’re relatively survivable for a wizard and have some excellent abilities. 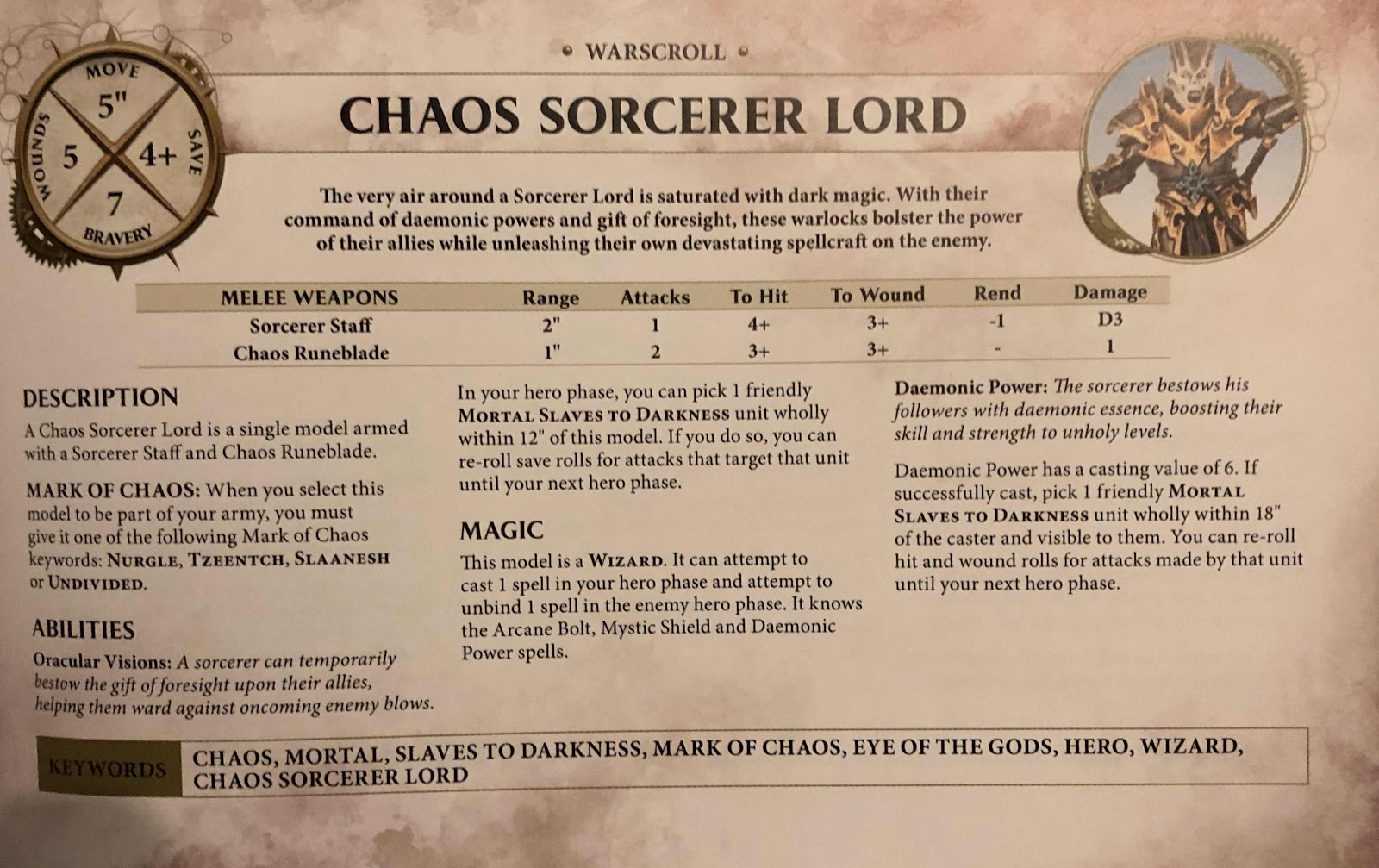 Oracular Visions is a brilliant ability, this isn’t a command ability or a spell this just happens in the hero phase! Rerolling saves is just immense, particularly on an important hero or a block of chaos warriors.
Daemonic Power is also an incredible spell, rerolling hit and wound rolls for attacks on a unit is very powerful. Again using it on warriors or Archaon if he’s in your list just going to make units very reliable.
Chaos Lord on Foot
The Chaos Lord on foot is another stand out scroll, at just 110 points again! 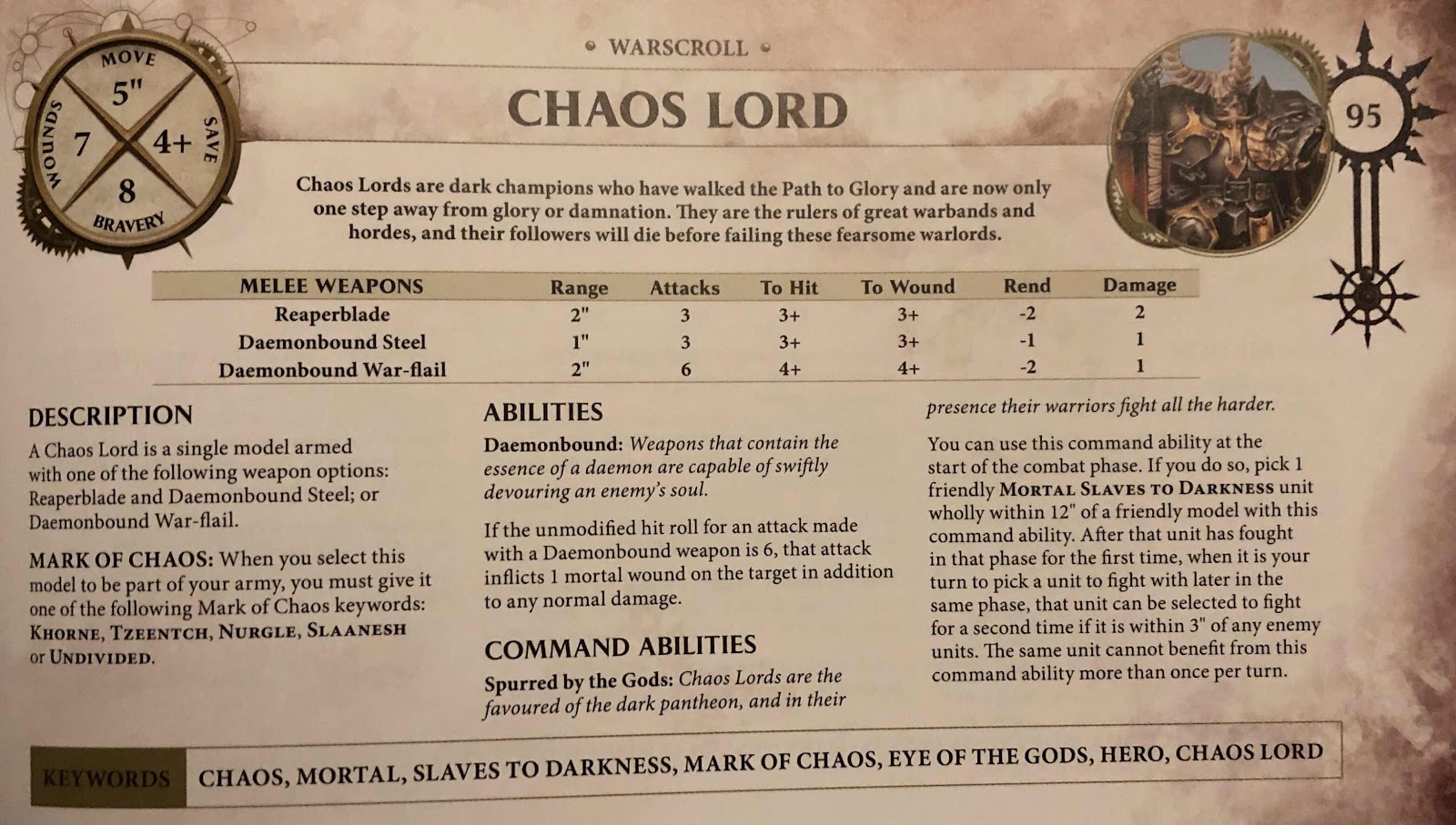 Having him rocking around the board with some chaos warriors, again makes him very powerful. He’s survivable enough and his command ability Spurred by the Gods is terrific. Allowing a unit to fight twice is rare in the game and is so adaptable. If you’re needing to clear an objective or push on a particular flank, this is amazing.
With Archaon again this makes him a terrifying prospect to fight against!
Chaos Chariots
Cheap, fast and complete with mortal wounds on the charge. I really like the chariot, particularly for my slaaneshi themed list.
Taking them in individual units too, means each chariot can have the exalted charioteer. Which gives you the plus one to hit. I think I’ll always be taking the great blade on them too for the 2 damage.
What is most interesting to me is the Swift Death rule this should hopefully get you 2-4 mortal wounds on the charge and then there is a battalion later to increase this potential!
Chaos Lord on Karakadrak
This sounds a bit too much like Karak for a duardin players liking! 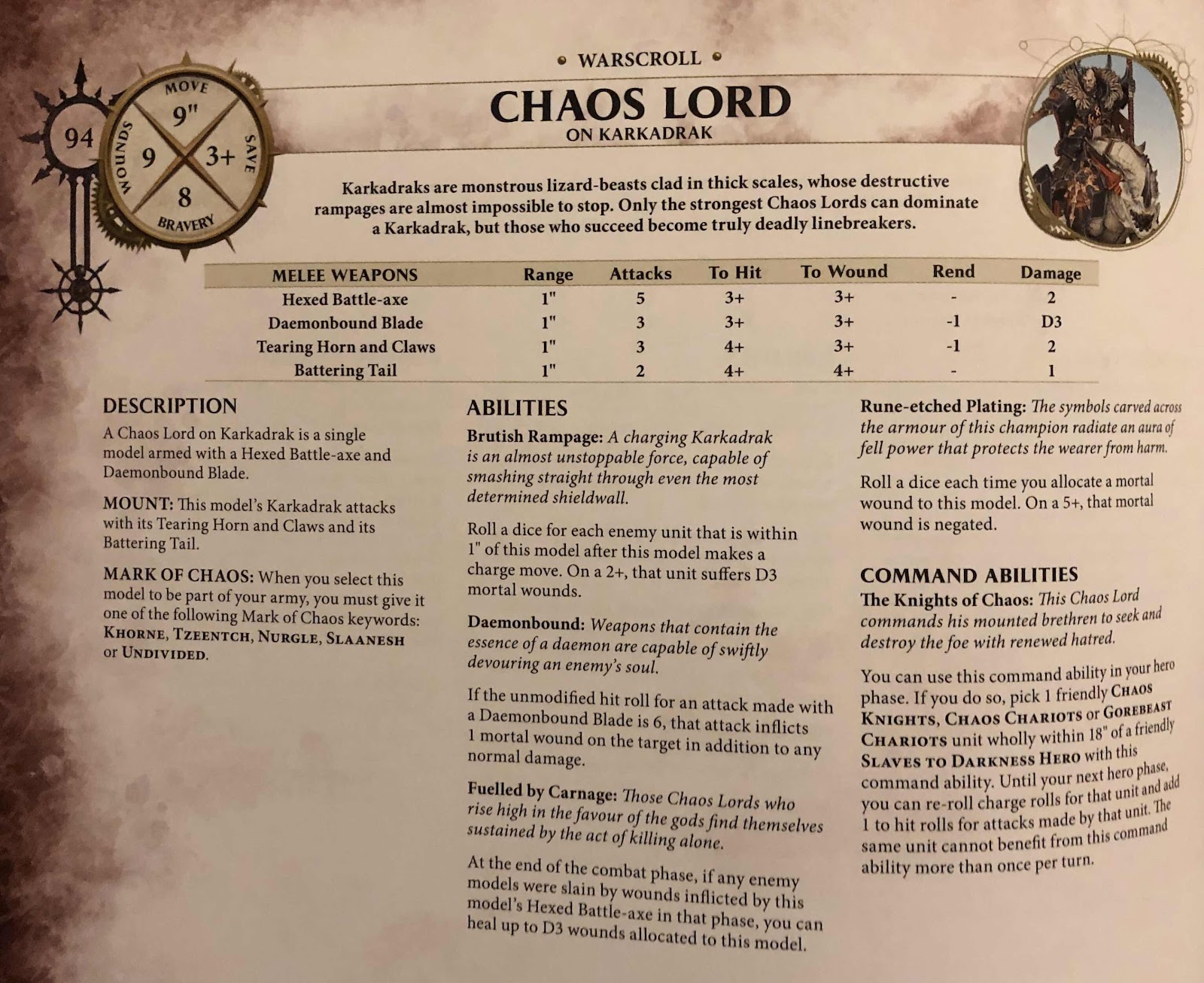 However, he’s actually a very good hero choice. At 9 wounds with a 3+ save and a 5+ mortal wound save he’s pretty tanky and again he does D3 mortal wounds on the charge!
The Hex blade does mortal wounds on 6’s to wound and with the runeblade from Malign Sorcery, you can get it up -3 rend at two damage a piece!
Well worth taking in my book. He can also grant reroll charges on a unit with his command ability which is great for the chariots.
Battalions
I’m going to talk about one battalion in particular that I really like, which is the Ruinbringer Warband it’s a solid choice at 140 pts, for a command point and lower drops I think it’s great.

The ability to take all of your chariots and knights in one battalion really gives you some more control over going first or not. What really stands out is it’s mortal wound potential at giving units the chance to do D3 mortal wounds on the charge!
We’ll talk about why I like it so much in the conclusion!
Points
It is a very elite army so don’t be expecting too many units on the field. With Archaon at whopping 800 points it’s hard to fit him in a list with everything else I want and Varanguard being 300 also makes them a hard sell.

But I do think the knights are over coated at 180 so hopefully they’ll come down as well as the warriors.
The Chaos Sorceror Lord on Manticore is also at 260 so it makes him and Belakor at 240 very good picks for Wizards. Especially with Belakor being a two caster.
Conclusion
So, the list I would like to create would revolve around the Karakadrak Lord, chariots, knights and the battalion.
Mortal wounds wise this would mean you could be doing two D3 mortal wounds on the charge with the Karakadrak Lord and D3 + the MWs from the Spare the Lash ability each time you charge.
Pretty great and fits the theme of a hard hitting Slaanesh list. It would be light on bodies for objectives but I’m just not a fan of the marauder models so I think I would go for a unit of chaos warriors to push forwards onto objectives and some cultists to hold mine.
The Untamed beasts are also pretty much an auto include in any chaos lists as chaff screens and their ability to scout forwards at the start of the game.
I’ll hopefully be able to post more now that I’ve started my new job and I have a few 40k Ork units and Cities of Sigmar units to show off on the blog.
Thanks for reading,
Aveinus Kaane
Posted by Aveinus at 11:57