Hello everyone,
It’s a really late review i’m afraid as I’ve been changing jobs and preparing to move house too!
I have however, really enjoyed looking at this book as they’re one of favourite factions, the new high elves look pretty great but not enough to tempt me from the dark gods. I’ll take Archaon over the weird teclis model any day of the week!
Although a head swap on the creature he has to a griffons head would improve it a lot for me. Here’s to hoping for new sword masters though! More dynamic poses would be an excellent edition though, Very much like the amazing chaos warrior and knight models we’ve already received!
So let’s get into it, as usual this will just be my thoughts on the book and and my favourite parts as there’s too much to cover in a blog review. 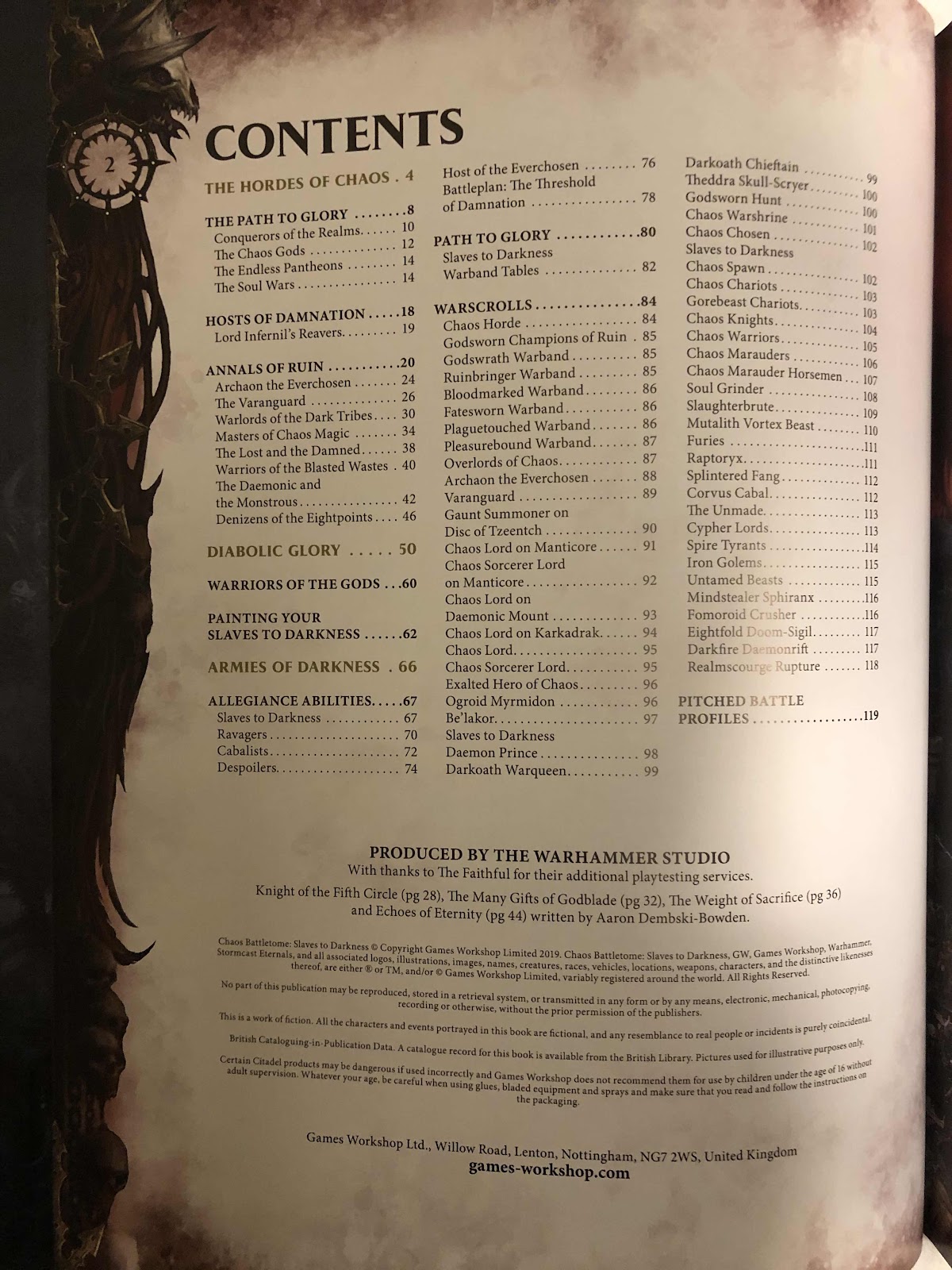 Standard shot of what you can expect inside the book. As usual lots of background, including a piece by Aaron Demski-Bowden which is great as you’d expect from him.
For me this book is about Slaanesh and what I can do to make my Slaves to Darkness more slaaneshi focused. Although I’ve yet to test any paints schemes as I am looking to finish my Cities of Sigmar army first! 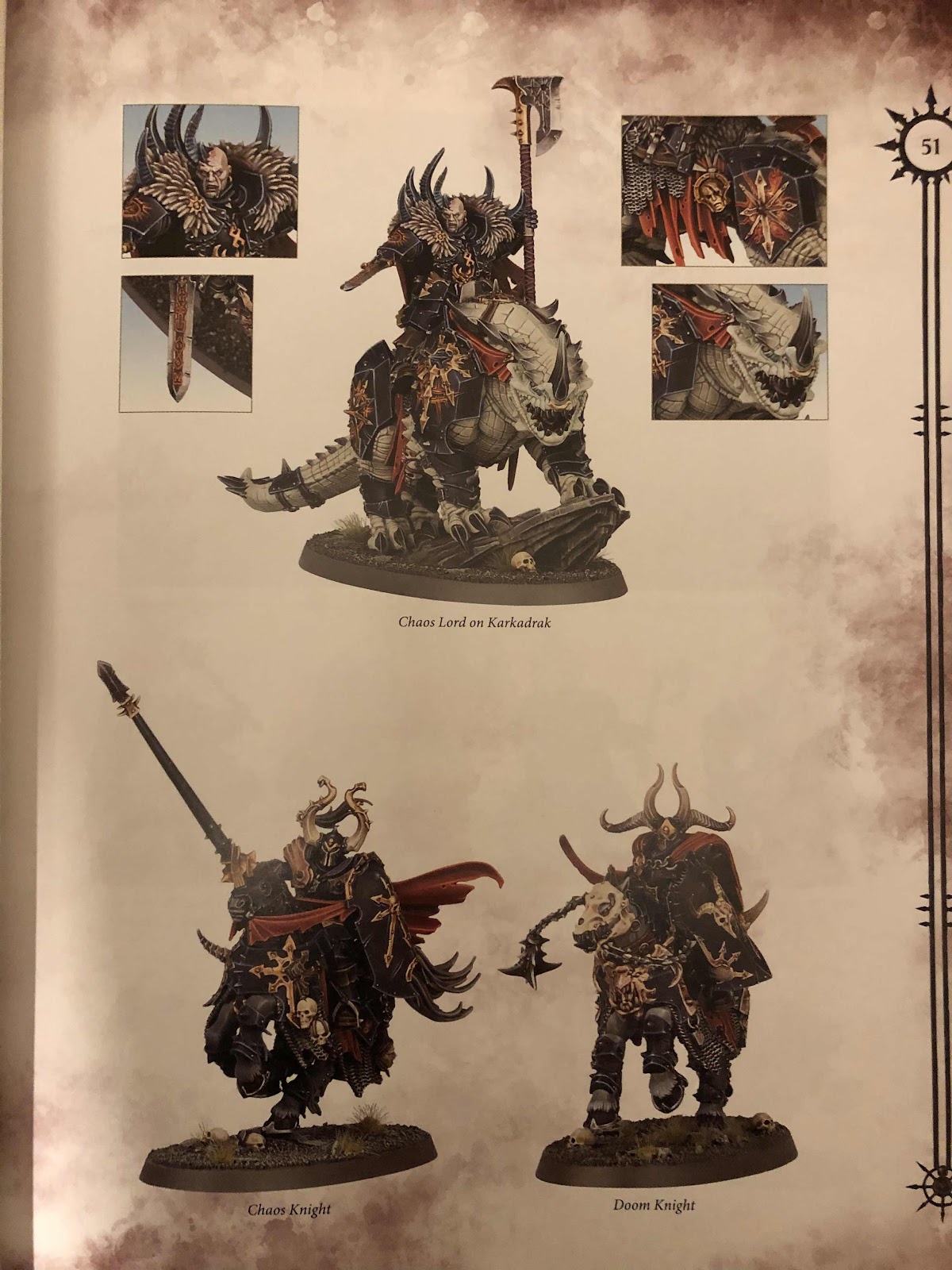 Both of these superb models will be a mainstay in what I am planning for my pleasure seeking warband. Fast and brutal on the charge is the aim of the game.
Negatives
So, let’s get the disappointing parts of the release/models out of the way first before all good bits.
To me it’s a shame so many of the oldest and ugliest models have great rules whilst the new models are somewhere in the middle. In particular the marauders and daemon princes really stand out to me.
Very old kits that are probably auto includes in a lot of lists. Its just a huge shame the models are so poor or dated.
So enough of the moaning...
Allegiance Abilities
So a Slaves to Darkness army must have one of the faction key words and if a unit already has one you can’t give it two. We’ll move onto these factions a bit further down though.
Aura of Chaos
Now this is a cool ability to get the different themes of the dark gods into your lists. 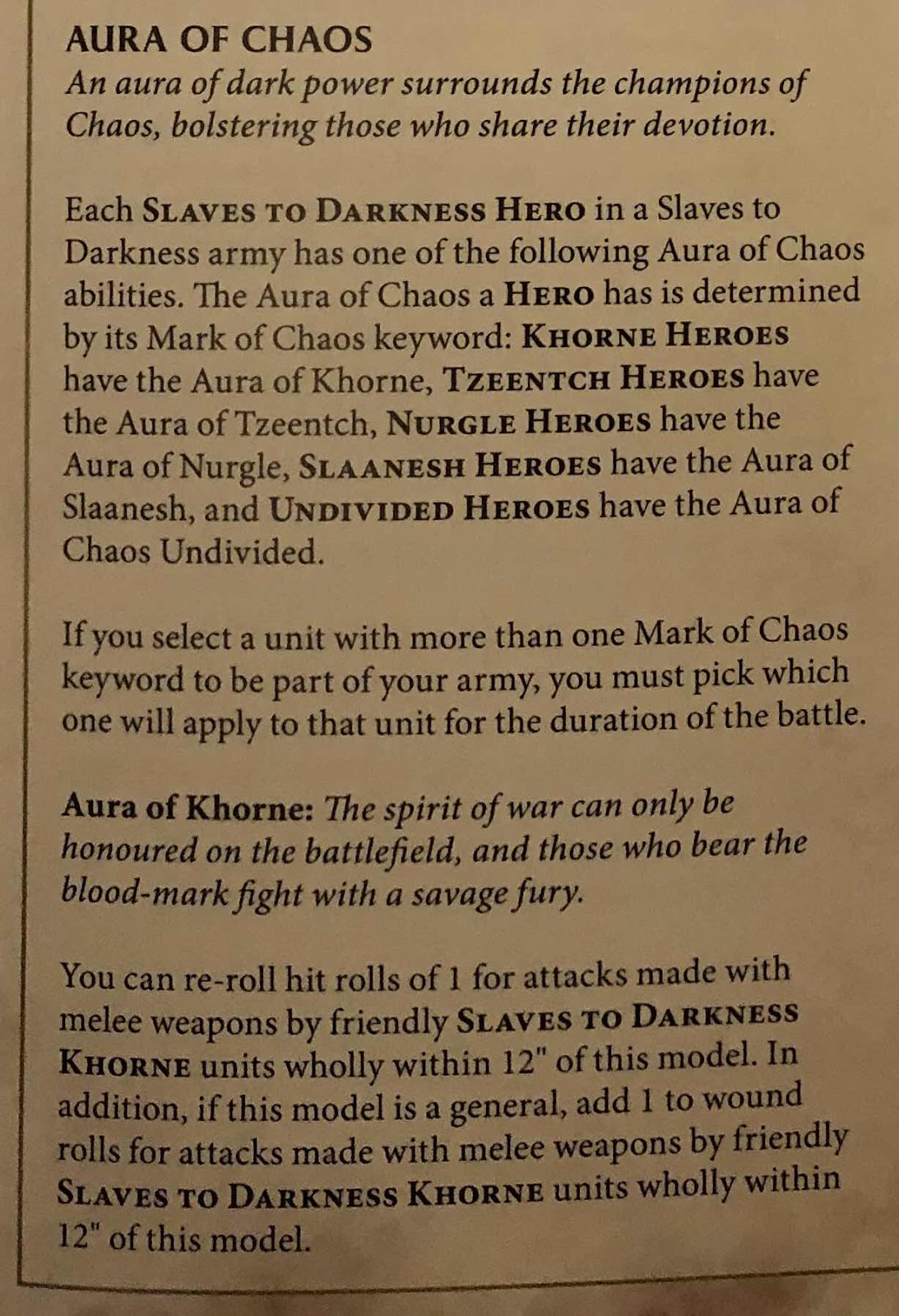 Excellent abilities on the Khorne aura, those rerolling 1’s are usually a command point for most armies and adding one to wound rolls is something else!
I think this is probably the best mark with Nurgles, exploding six’s adding +1 damage and -1 one to hit with missile weapons if you’re within 12 inches of your general coming in a close second. 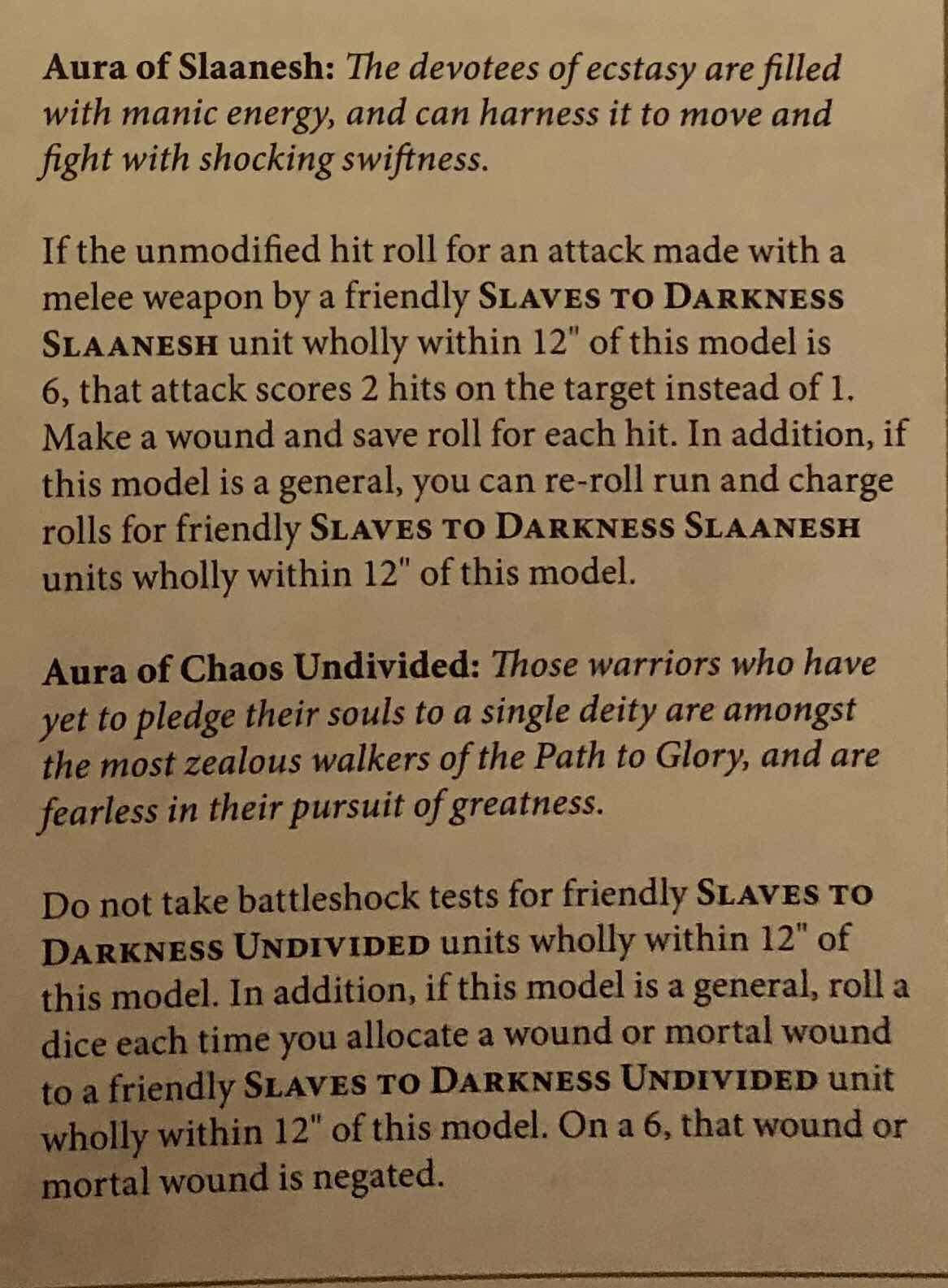 It’s a little disappointing Slaanesh’s abilities aren’t as good as the others but they’re not bad. It would be nice for the reroll charge aura to have been a bit bigger, especially for the list I’m planning. That could be possible though depending on the faction you take.
Eye of the Gods
For the Dark Gods!
I love this mechanic, I know it’s nothing totally new but it’s great to see it back in the game. 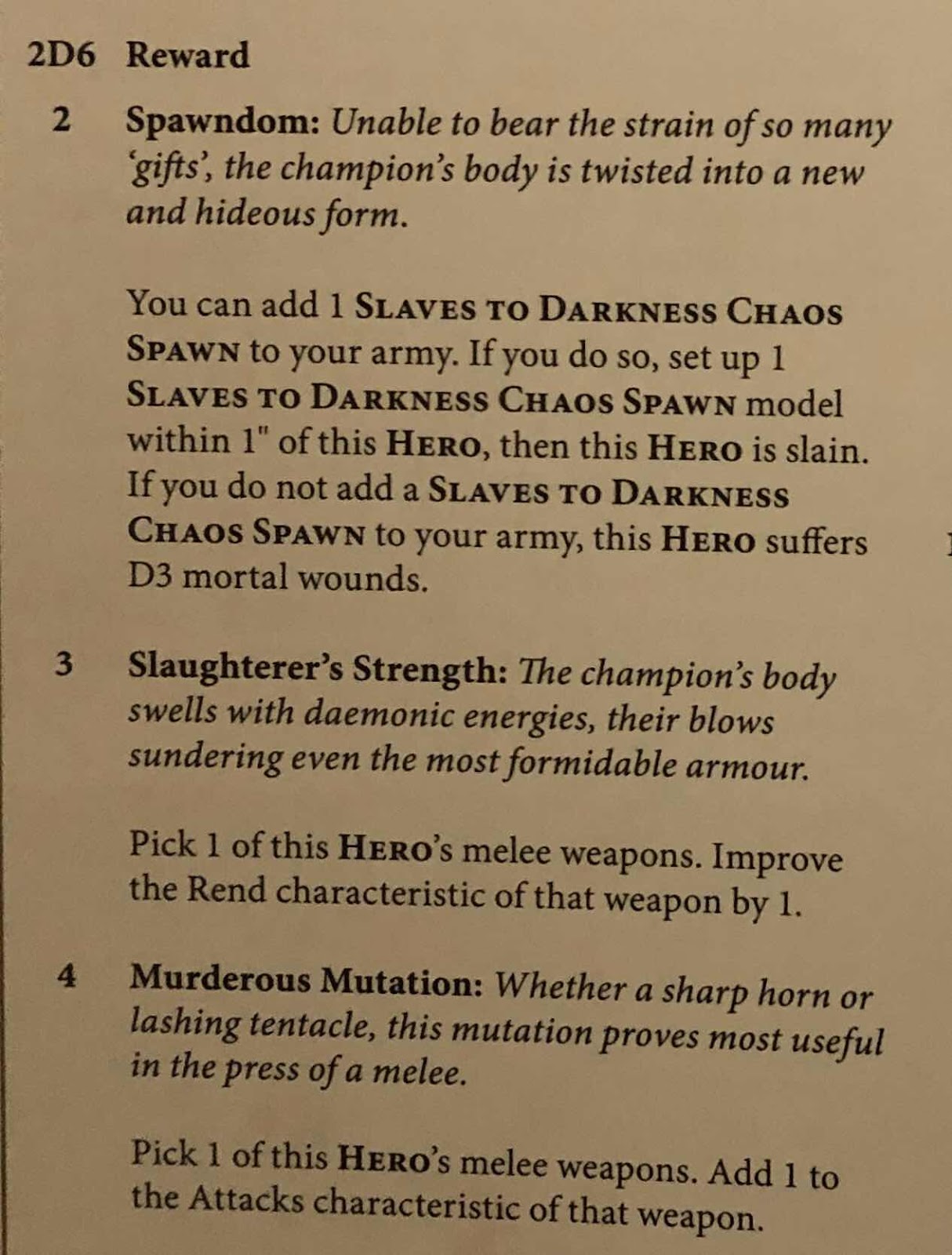 So if one of your heroes kills another enemy hero or monster, it gets to roll 2D6 on the table.
If you roll a 2 or get the same number twice you are turned into a spawn! Pretty risky stuff!
Now I’m assuming there isn’t anyway to pick abilities either so in a matched play game it could be a burden rather than a boon. I can’t see any wording to say you can pick but I may be wrong. 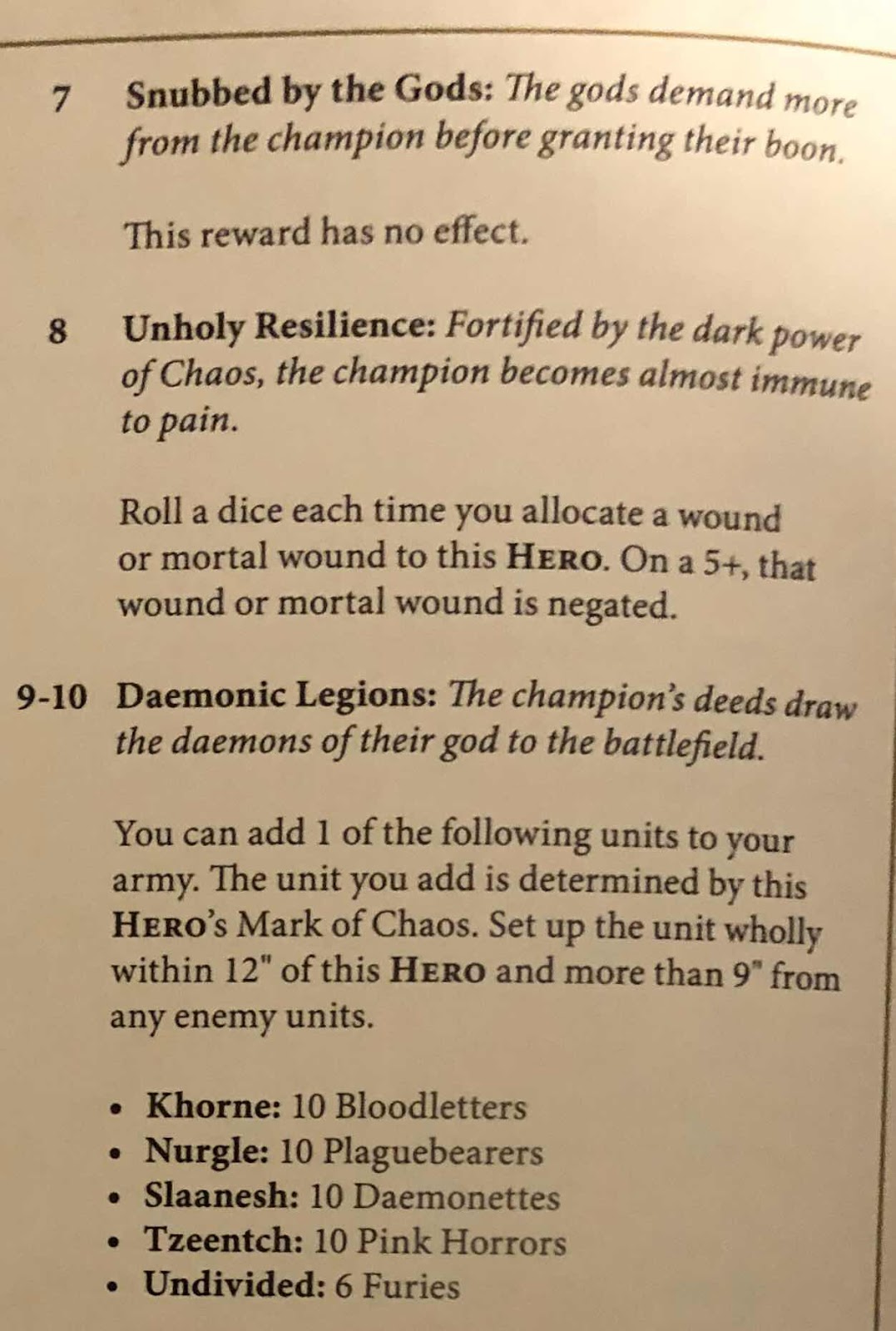 Being able to summon on a unit is quite nice along with the 5+ mortal wound save.
Dark apotheosis is on a roll of 11-12 and it allows you to set up a Daemon Prince in your hero’s place. It would be pretty awesome if there was a good slaanesh daemon prince available or any other mark for that matter!
Spell Lore - Lord of the Damned
What’s great about this book (the cities book too) is there are plenty of spells that are really useful and you’re almost spoilt for choice.
The army lacks a lot of double casters but they are available. 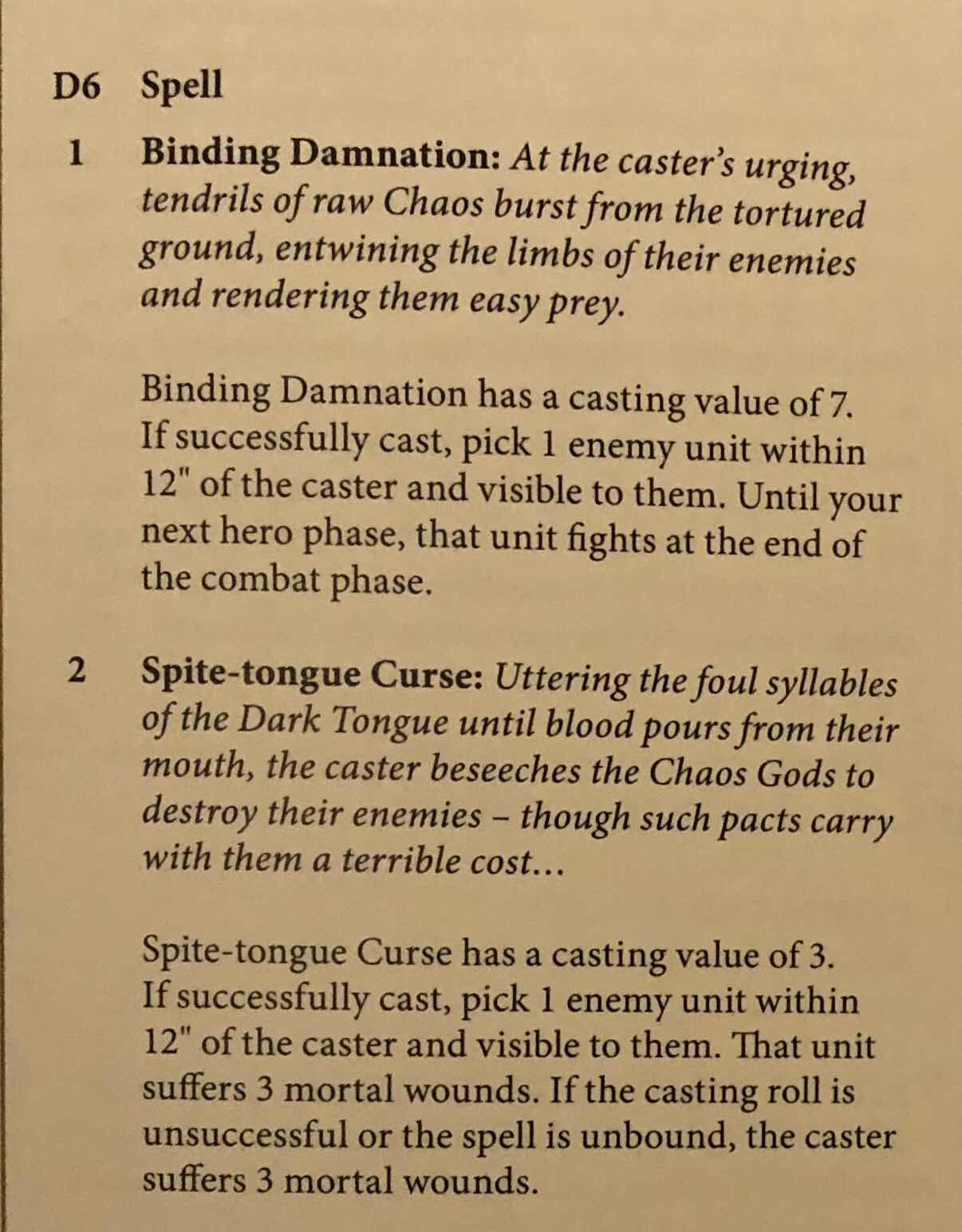 With the activation wars in full swing, Binding Damnation has a place in any list. Making a unit strike last is excellent. Casting on a 7 is a little unpredictable but there are ways to get pluses to your casting roles. 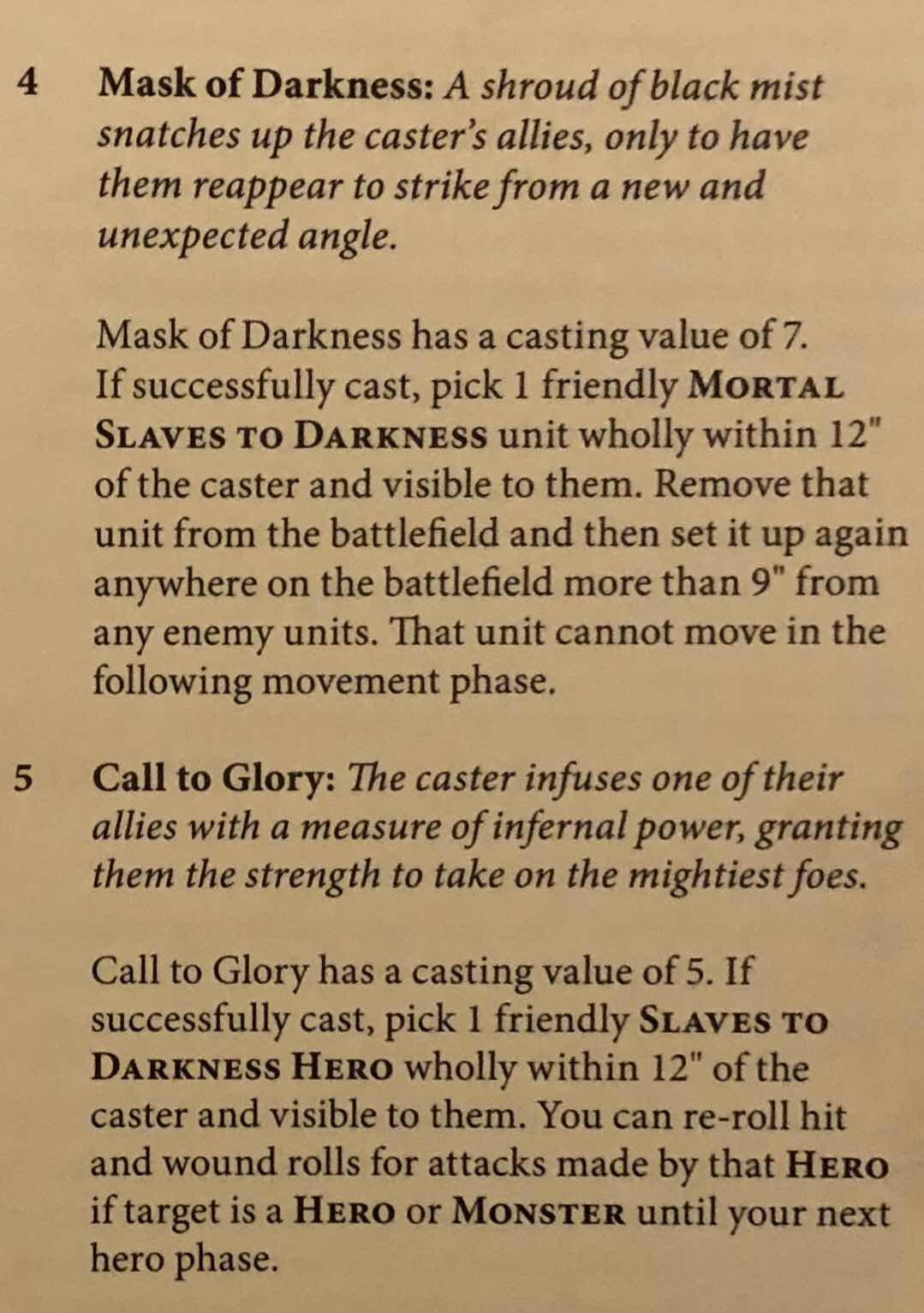 Mask of Darkness is another very good spell. Adding movement to an army is great. Tactically a unit that can be teleported onto an important objective or to go after heroes in your opponents backfield is an auto include for me!
Finally Whispers of Chaos is probably the best spell of the lot, pick a unit within 12 inches and for each model in the unit every six rolled causes a mortal wound. So not only is it fairly offensive, that unit can then not move until your next hero phase! Stick that on a 300+ point unit and you’re winning.
Allegiance Abilities
Now onto the factions of the Slaves to Darkness. I’d have personally preferred them to be more god specific, with one or two for the undivided as well.
But what we have are four factions focusing on different on a more undivided theme where the marks add some flavour too.
Ravagers
More of a focus on the mortal elements of a chaos army for this one. 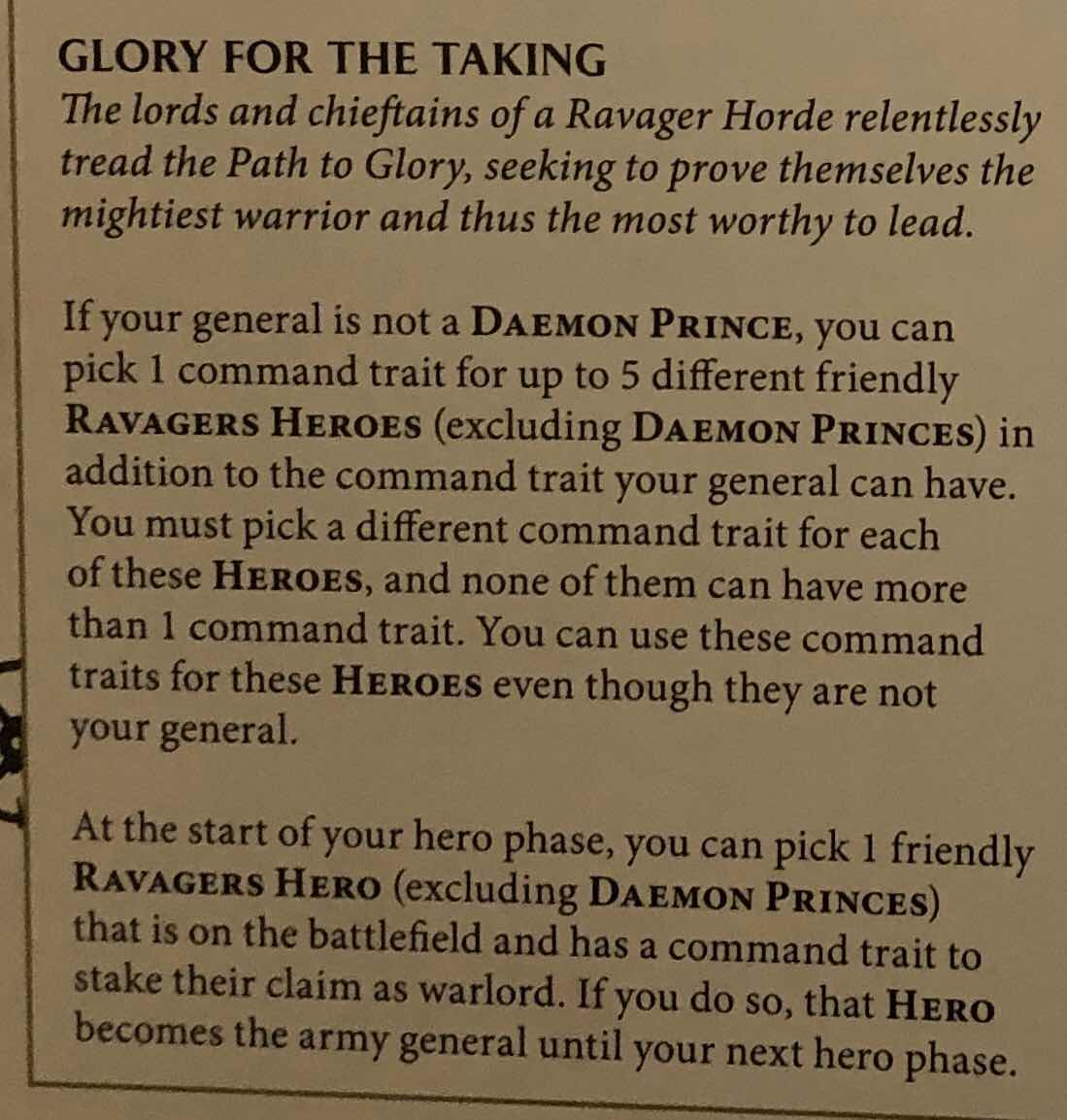 Having a choice of six command traits depending on how many heroes you have is pretty cool. They’re not amazing but that choice gives you some tactical flexibility.
My favourite part of this faction is the Rally the Tribes command ability.
For this once per game and only once in turn one of the heroes can bring onto the board a unit of ten marauders, cultists or 5 marauder horsemen. Within 6 inches of any board edge.
I doubt I’d be using any of the rubbish looking marauder models but the new cultists would be great for this.
Can’t complain at a potential 70-90 point unit for free each turn! Provided you have five heroes and they survive long enough that is!
Command Traits 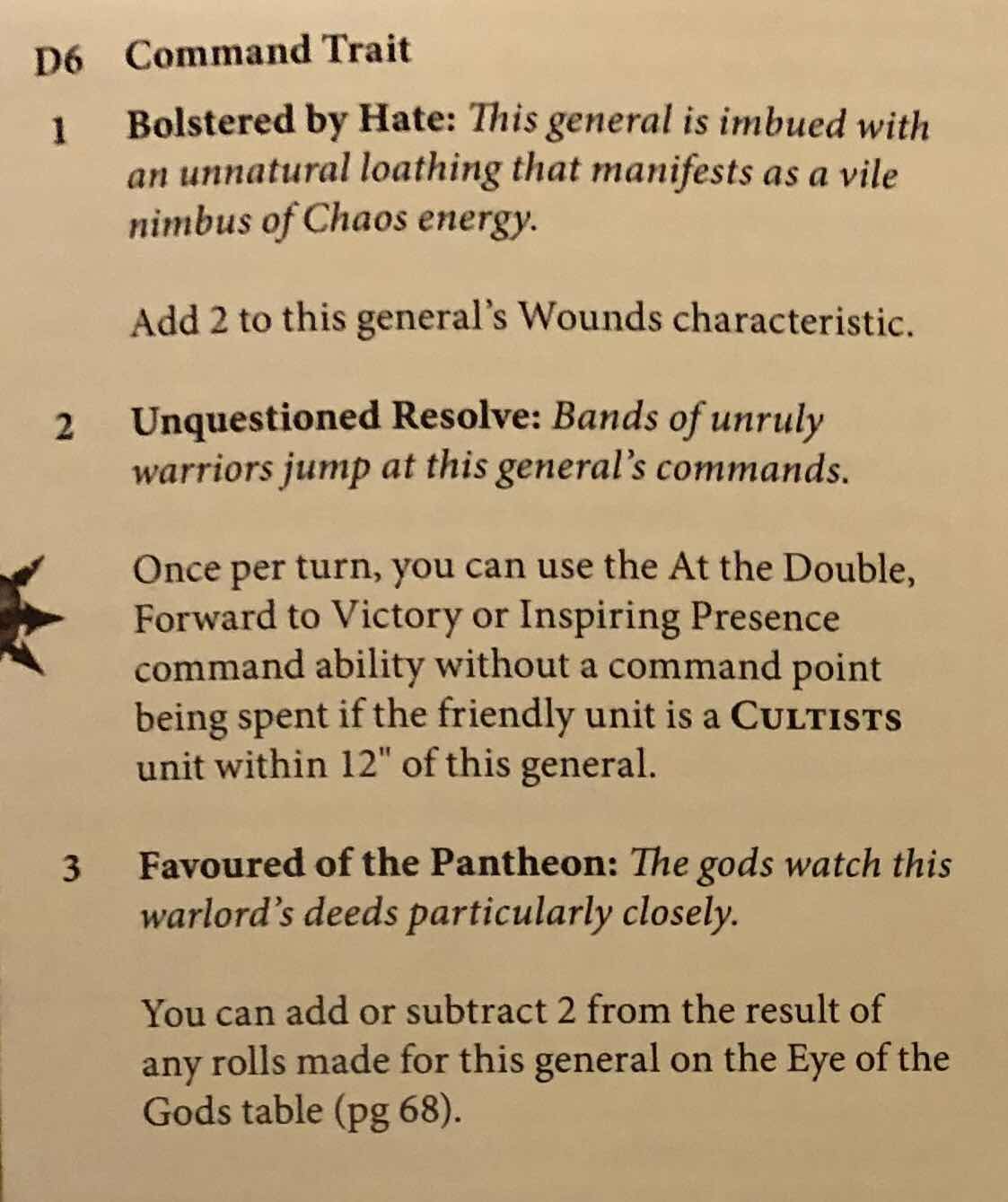 Unquestioned Resolve is pretty great for those cultist units that might need inspiring presence throughout the    game particularly if they’re screens that are there to hold an offensive unit up.
Untamed beasts are great for this with their pregame scouting move that gives them an extra six inch move. Plus run and charge! So they are excellent chaff screens.
Artefacts
So I don’t think there are a huge amount of great command abilities or artefacts in this faction but with the chance to use so many throughout the game it balances out. The artefacts are slightly better however. 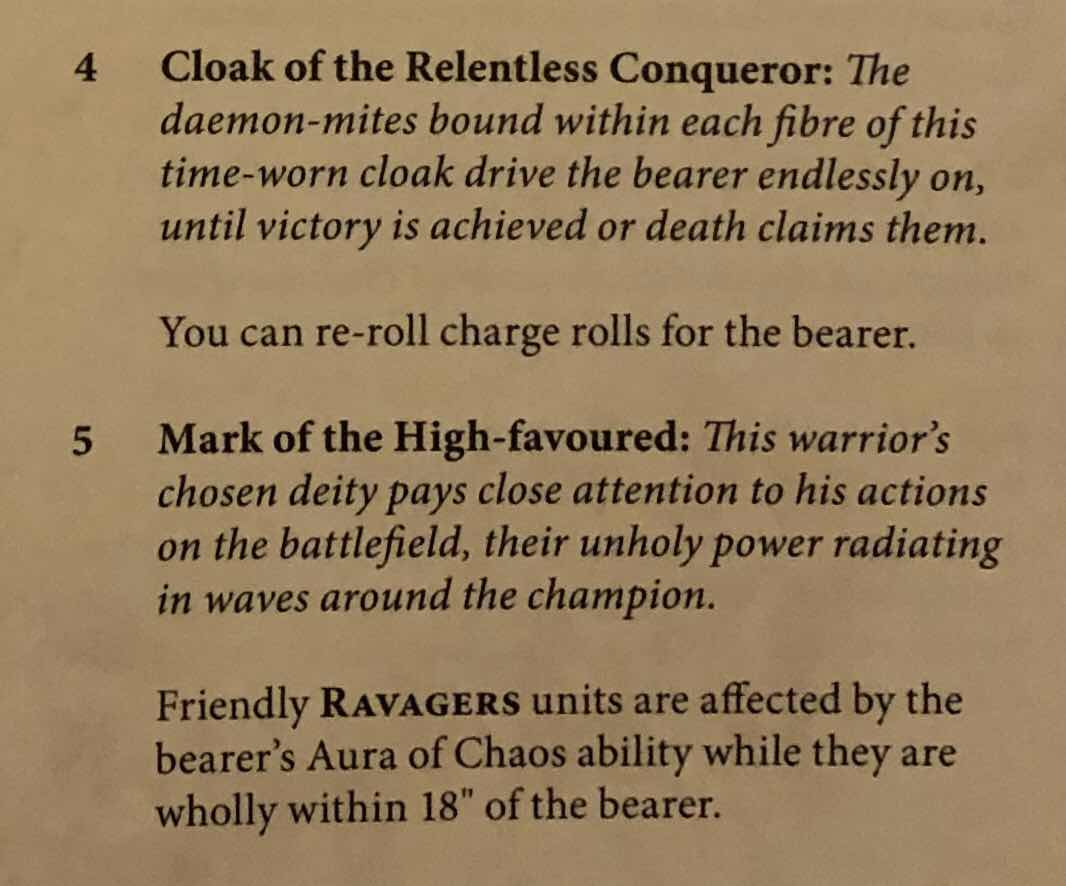 As mentioned earlier the Mark of the High Favoured
Allows your chaos aura to be 18 inches. So with this on your slaanesh general you’re looking at rerolling charge rolls for units within 18 inches of him so in a predominantly chariot and knights based army this is a great artefact.
I’ll come on to why I like it so much later in the review.
Overall I think Ravagers probably don’t have the most competitive builds, however, the Rally the Tribes ability really adds a lot to the army in terms of extra units for free and using these to threaten your opponents objectives and characters.
You will still probably need some chaff units in your army initially though to prevent yourself from any kind of alpha strike so it doesn’t help your army build in that sense but It’s still very good.
So I think that’s enough for part 1, I’ll look at Cabalists and a few warscrolls and battalions in part 2.
Thanks for reading,
Aveinus Kaane
Posted by Aveinus at 15:18