We have been fortunate enough to have been sent a copy of the new Fyreslayers Battletome to review, so here it is. 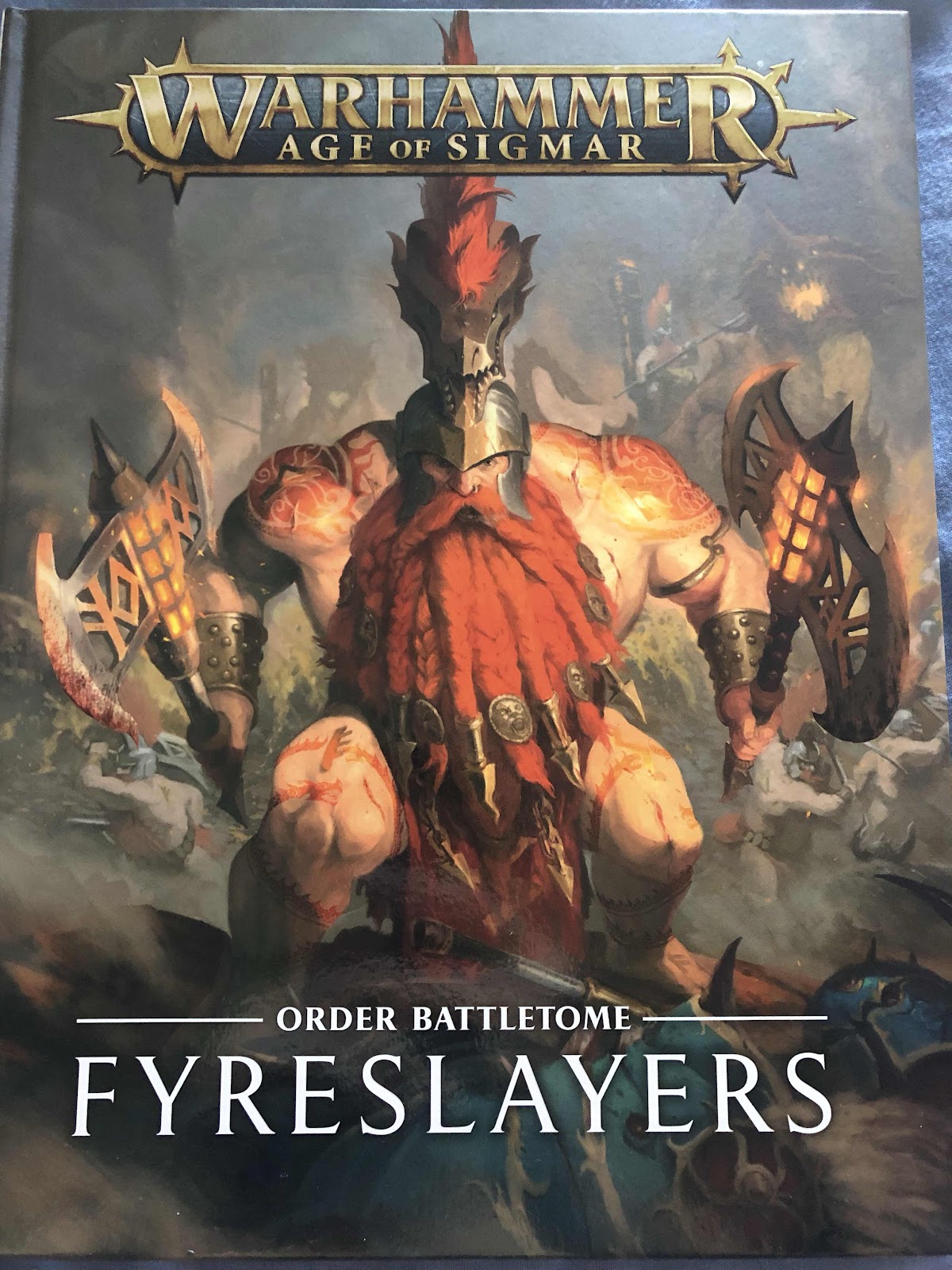 The best place to start when talking about the Fyreslayers is their origin. Fyreslayers are a faction of duardin that’s dedicated to the fallen god Grimnir. They are normally very aggressive, and o let really care about war and gold. This makes them the perfect mercenaries for hire.

Fyreslayers first appeared in the Realm of Fire, Aqshy during the Age of Myth but have since spread throughout the realms. Some believe they are Grimnir’s children, while other believe the god made them out of his Incandescent rage, in fact, no one really knows their true origin. 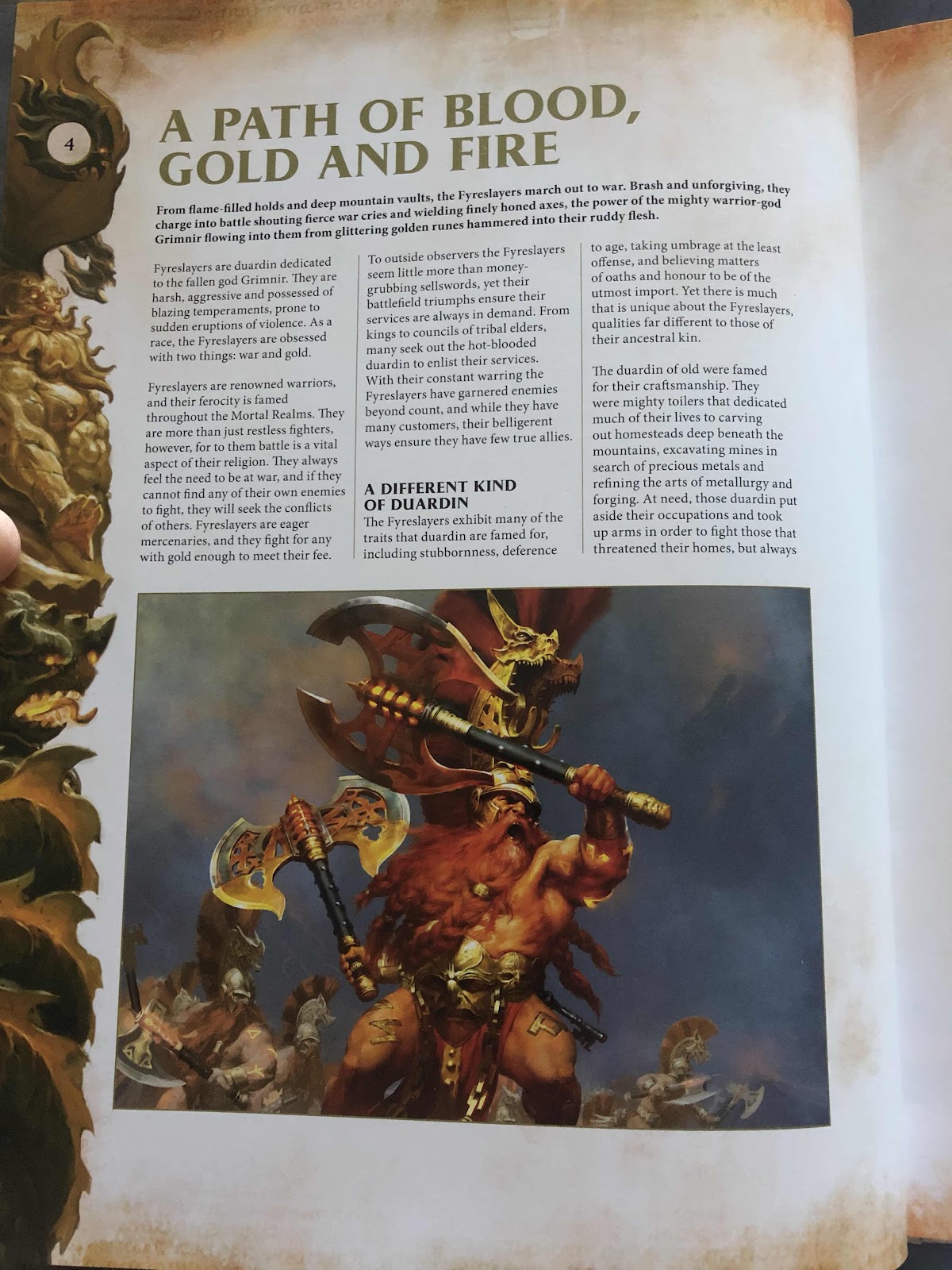 To outsiders, possibly the strangest habit of the Fyreslayers Is the practice of pressing metal into their flesh, which glow in battle as if come straight from the forge. After battle, they collect their fallen, and any payment due, and return to their stronghold, which is more often a magmahold beneath the mountains. However, since the construction of larger cities of Order, they can also be found in forge-temples within the cities. 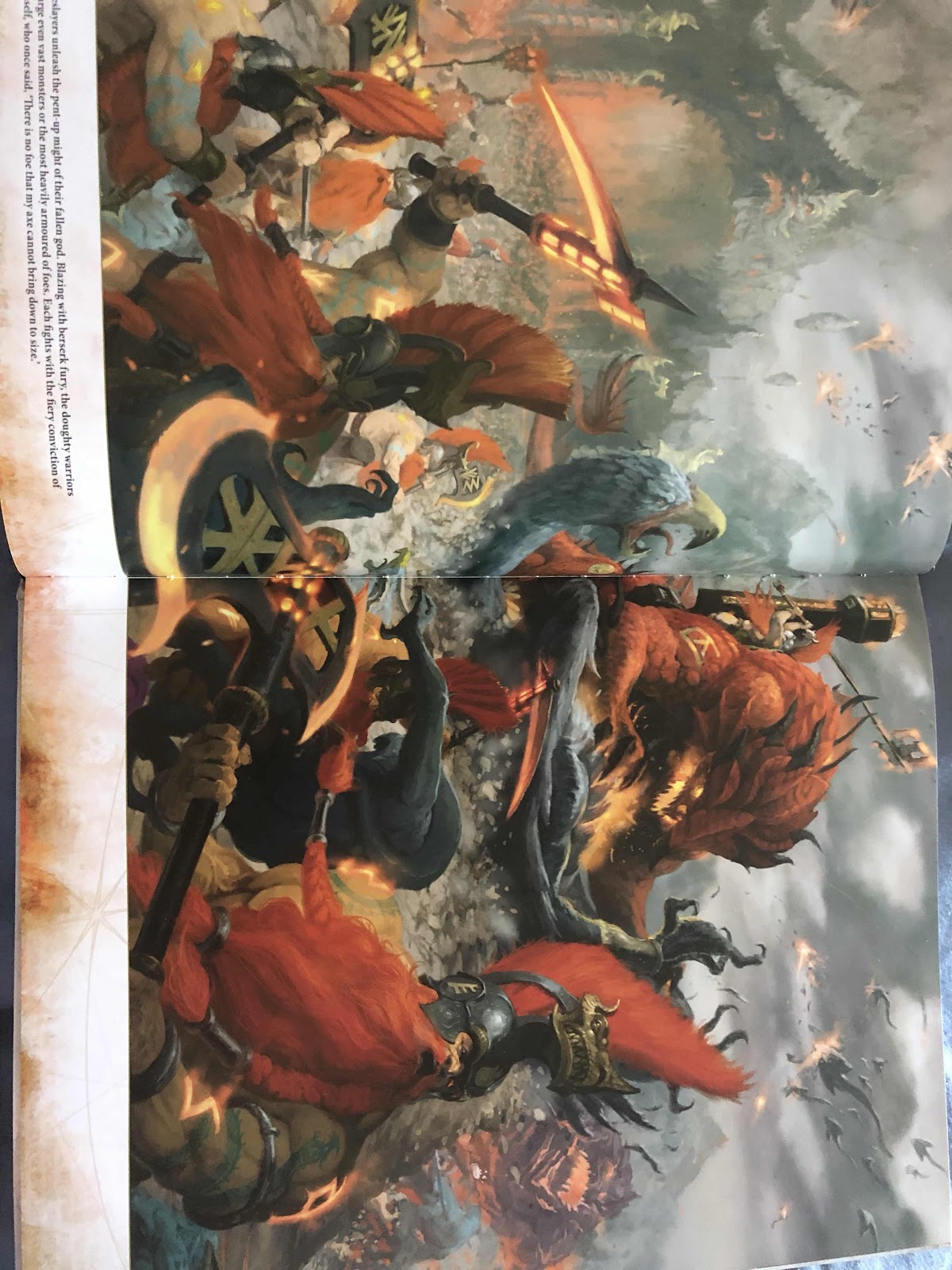 During the Age of Myth, Grimnir sought to serve those loyal to him, so he acted on their pleas and hunted and caught the godbeast known as Ignax. He chained Ignax to the Land of the Chained Sun so that all might have light and fire. After this happened, an event called the Thagduegi - the Great Betrayal - occurred. Although the details of this event is unknown, this caused the duardin pantheon to split. Grimnir and his brother Grungni were shackled atop the tallest of the Iron Mountains of Chamon, destined to stay there forever had it not been for Sigmar.

When Sigmar freed them, they both pledged oaths to repay the favour. During their imprisonment, Grimnir’s rage steadily built up close to boiling point. As a result of this, he demanded Sigmar name a mighty enemy for him to slay, thereby fulfil his vow. Sigmar names the godbeast, Vulcatrix, the mother of all salamanders, a decision to which he regretted shorty afterwards. 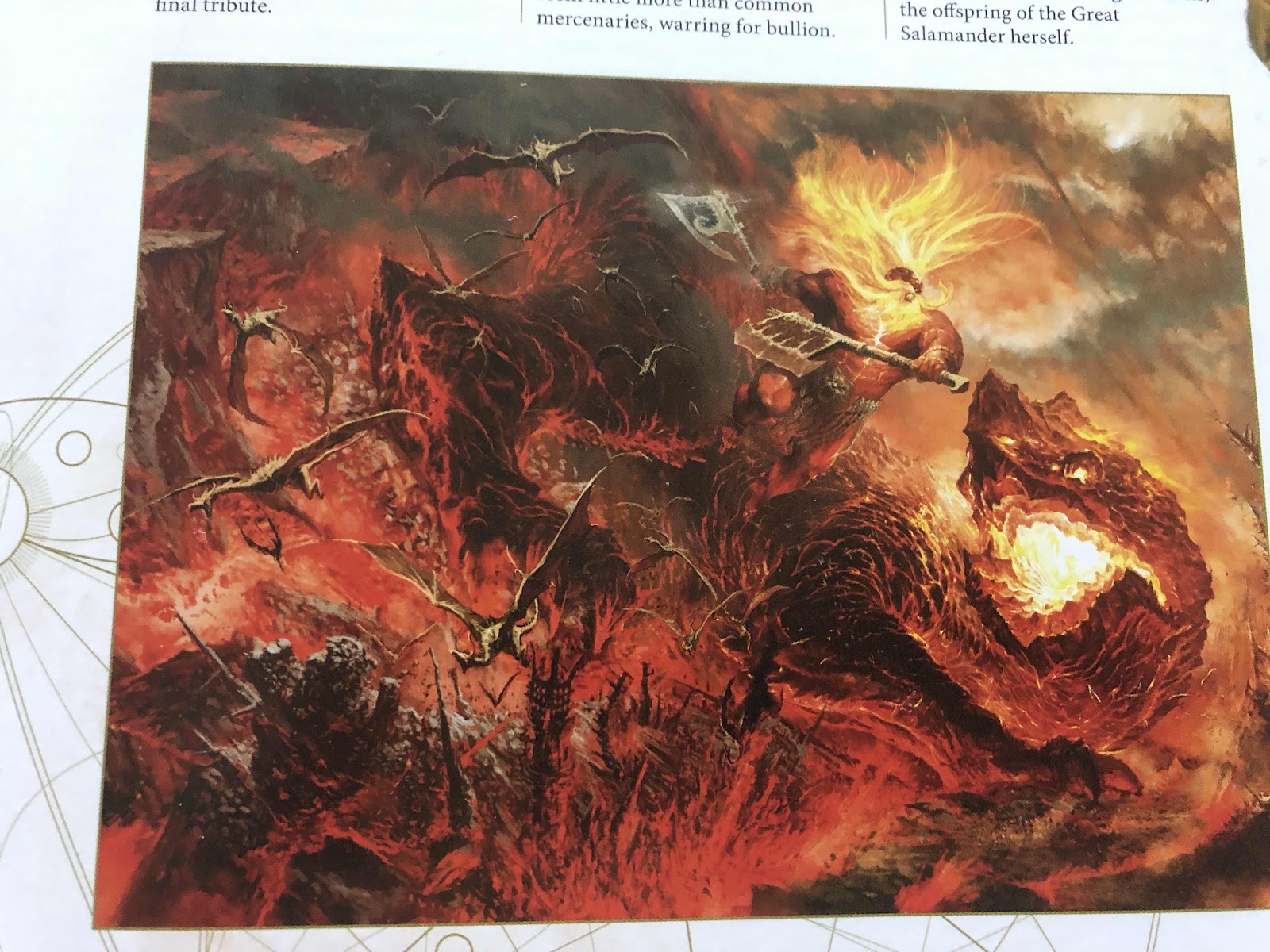 So epic was the clash between Grimnir and Vulcatrix that when Grimnir delivered the killing blow, a nova-like event ignited the magics of Aqshy. The sheer heat of the event fused the divine spirit of Grimnir with the Great Salamander’s blood of liquid metal. God and godbeast were intertwined and scattered far across the realms. Where these fragments fell, they burrowed themselves into the ground with a fused with veins of gold. This gold was undistinguishable from normal gold to all apart from the Fyreslayers, who called this new metal ur-gold. It is this very gold that has caused the Fyreslayers mercenary lifestyle, as they wish to retrieve as much of it as possible. They believe that releasing the power within ur-gold durning battle, will bring them closer to their god, and also if enough of Grimnir’s Spirit is released, he can be reborn.

The other after-effect of the epic encounter between Grimnir and Vulcatrix was that black spheres were formed in some flamestruck regions. This spheres were in fact eggs that would one day give hatch Magmadroths, the offspring of Vulcatrix herself.

The Battletome then goes on to explain Magmaholds, the name given to a Fyreslayer stronghold, and also what Lodges are. Which basically they are a group of Fyreslayers with a common ancestor. 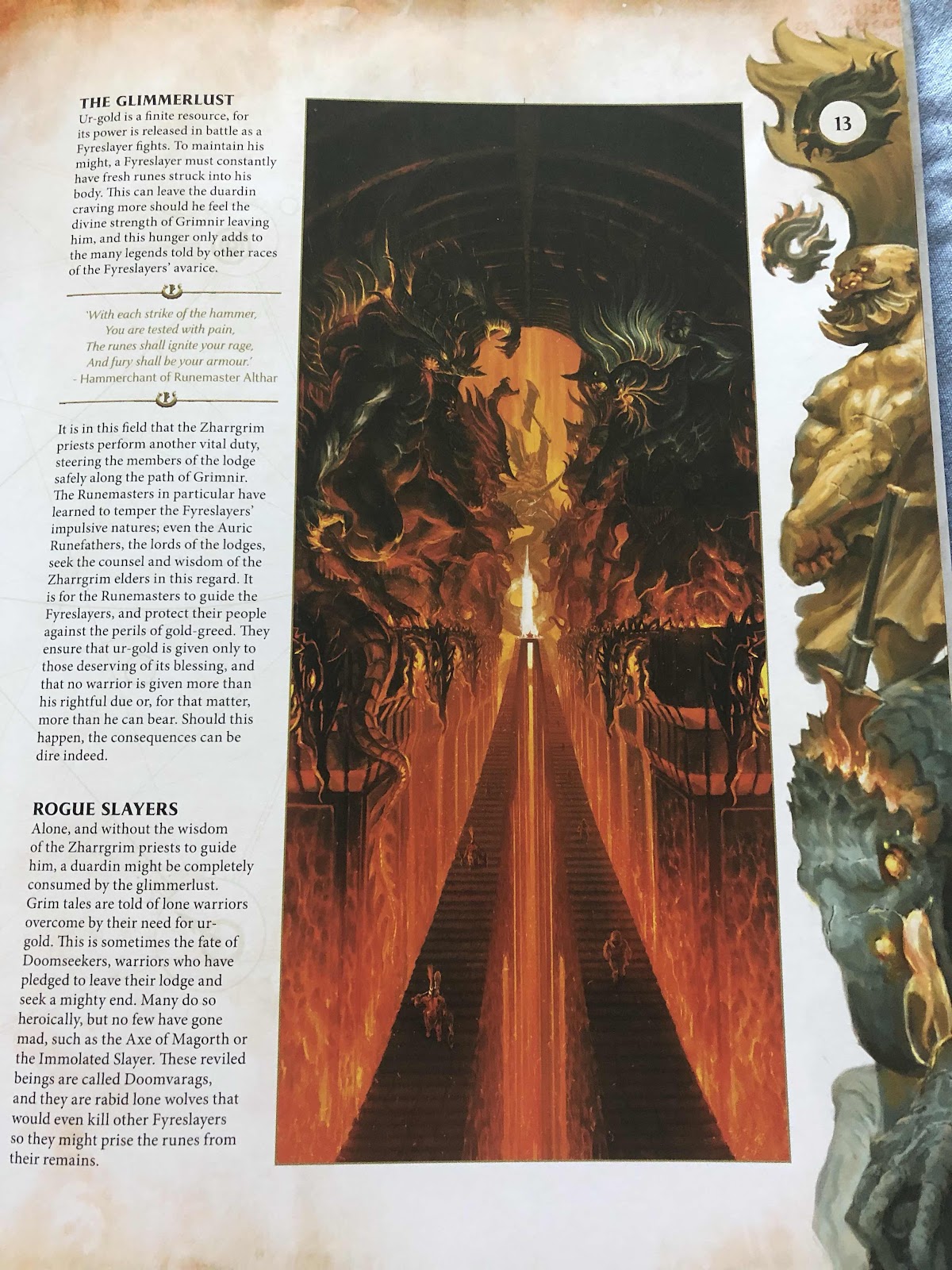 My favourite lodge out of the ones names in this Battletome has to be the Ulrung. A lodge from Shyish who actually mark their bodies with white ash of the dead. This sounds like a really fun and interesting colour scheme, and even one that I would strongly consider doing of I was to one day for a Fyreslayer force. 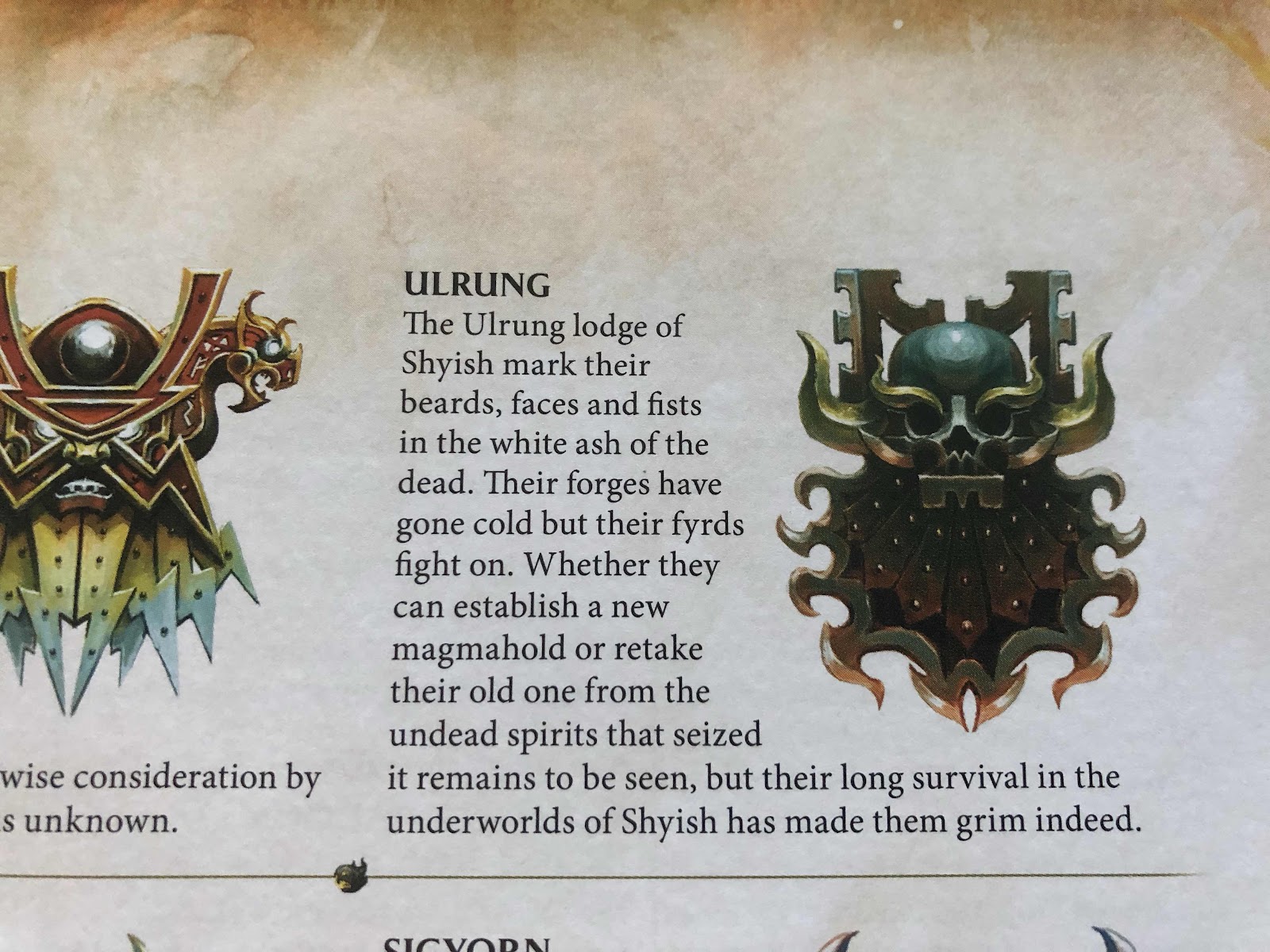 Durning the Soul Wars, the Fyreslayers suffered as most other races did. Loosing whole Magmaholds, and even some lodged had their entire bloodline severed.

There is a great deal of interesting information detailing the different units that make up a Fyreslayer forces. With of course some beautiful artwork as well as an excellent painting guide.

Now I’m going to have a look at some of the rules available to all Fyreslayer players.

First up is the Command Traits. I really like Destroyer of Foes. This increases the damage of the generals melee weapons by 1. This could be used to increase the damage of a Auris Runefather’s Latchkey Grandaxe to 4!!! 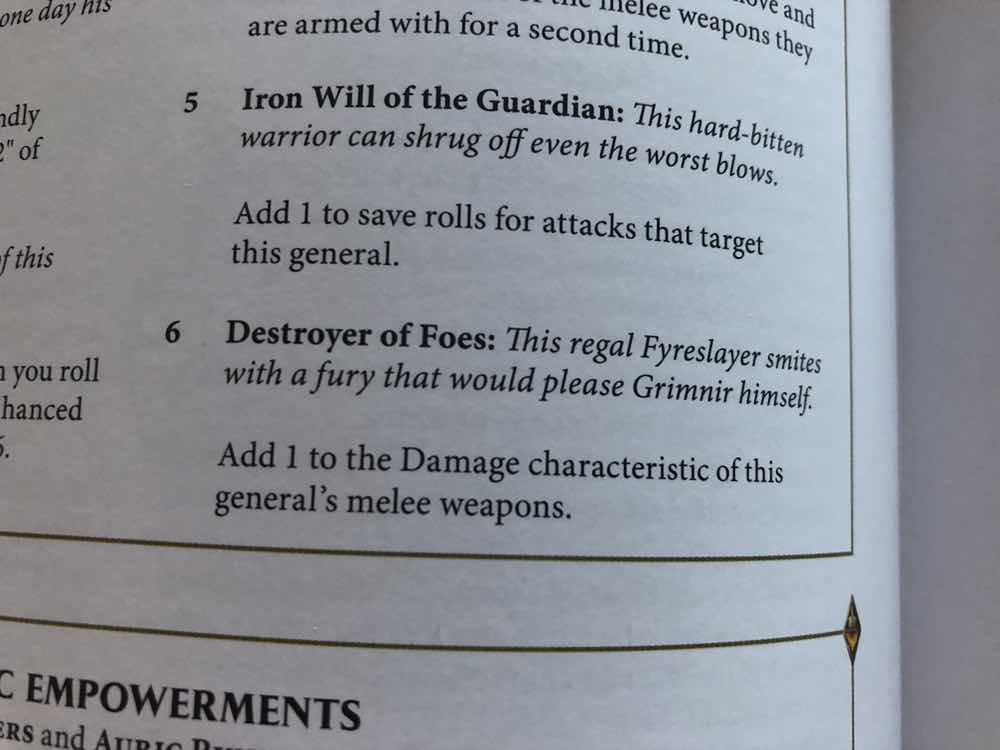 Next up, Artefacts of Power. The Shimmering Blade really stands out to me. This increases the Rend characteristic of one of the bearers melee weapons by 1. So, combine this with Destroyer of Foes, and you then have a weapon that is 3 attacks, 3+ to hit and wound, -2 rend and 4 damage. Not only that, but on an unmodified hit role of 6, the damage increases by another 1, bringing it to 5. 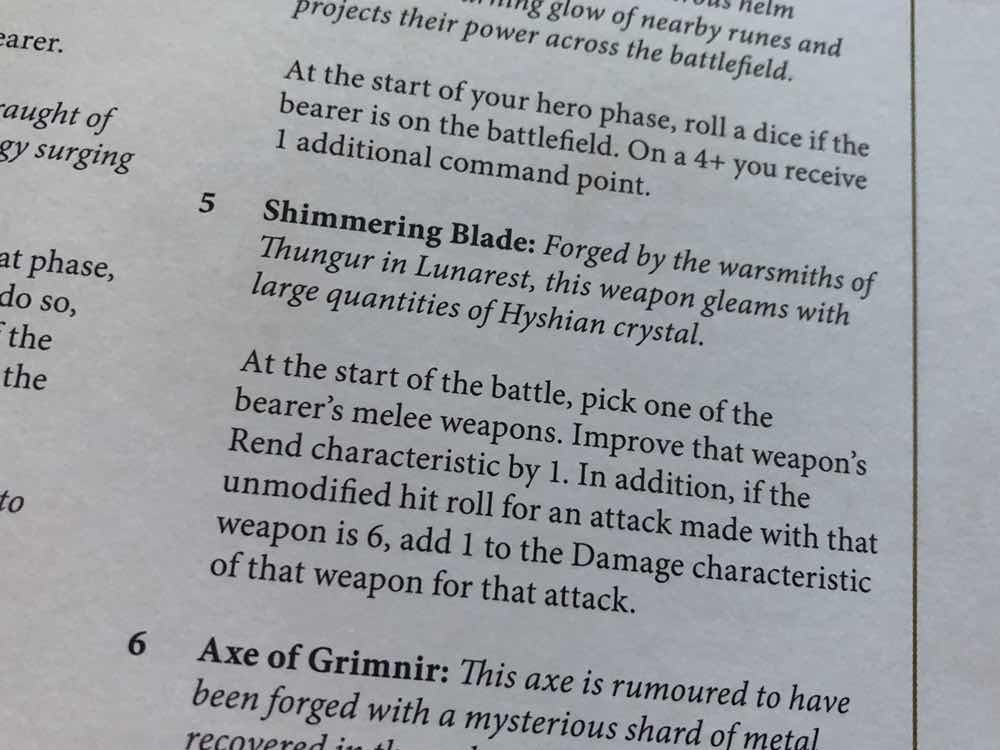 There are even traits for the Magmadroth. The Coal-heart Ancient is a fairly save bet as it reduces the Rend characteristic of melee weapons that target this model by 1, to a minimum of 0. 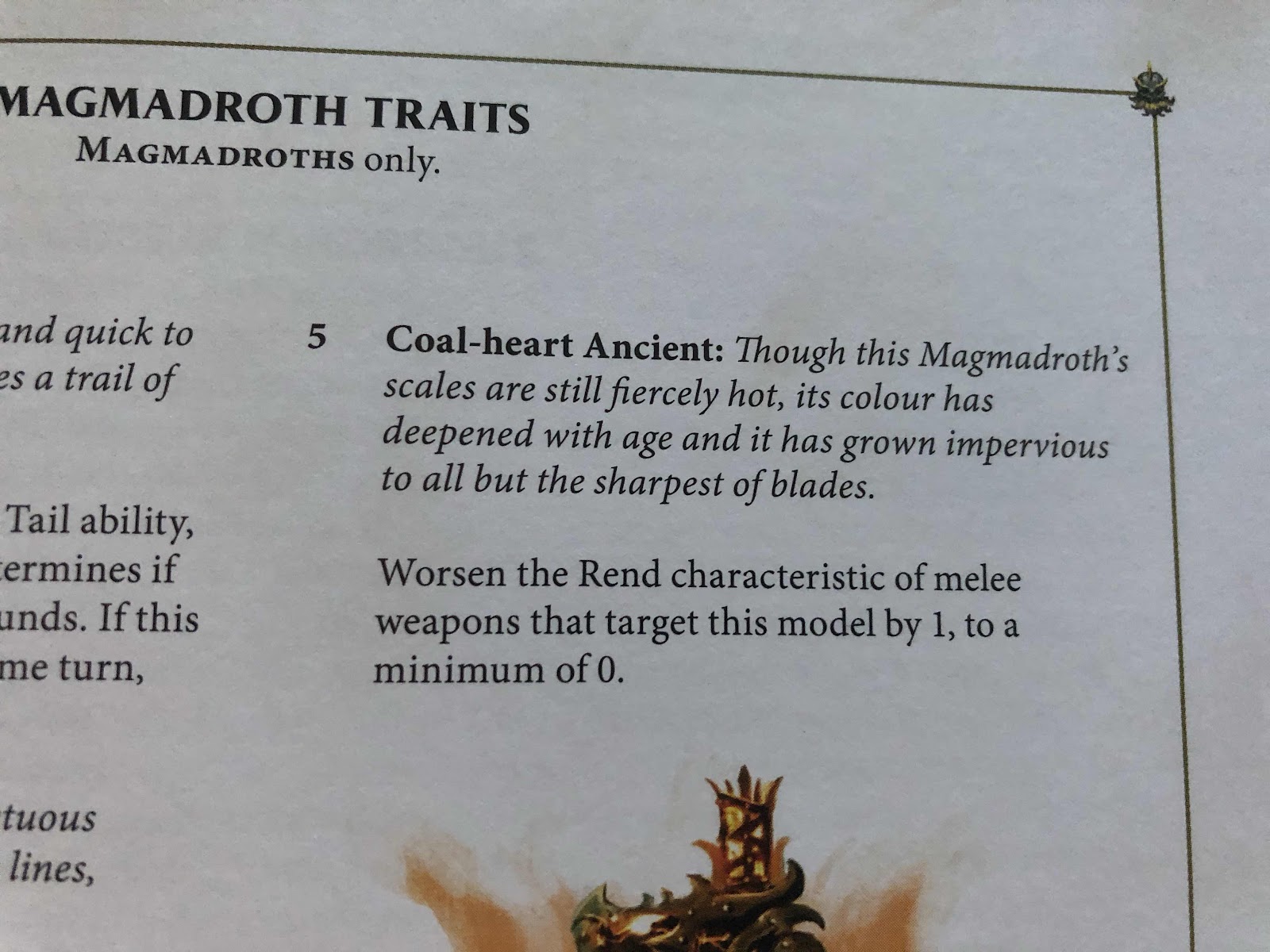 Next in the Battletome, is Prayers. Most of these are pretty situational, however the one that I think may be the most used is Prayer of Ash. This lets select a friendly unit within 18” of the priest, and on a roll of 4+ that unit adds 1 to its save roll until the start of your next hero phase. This would be great for trying to keep a unit on an objective. 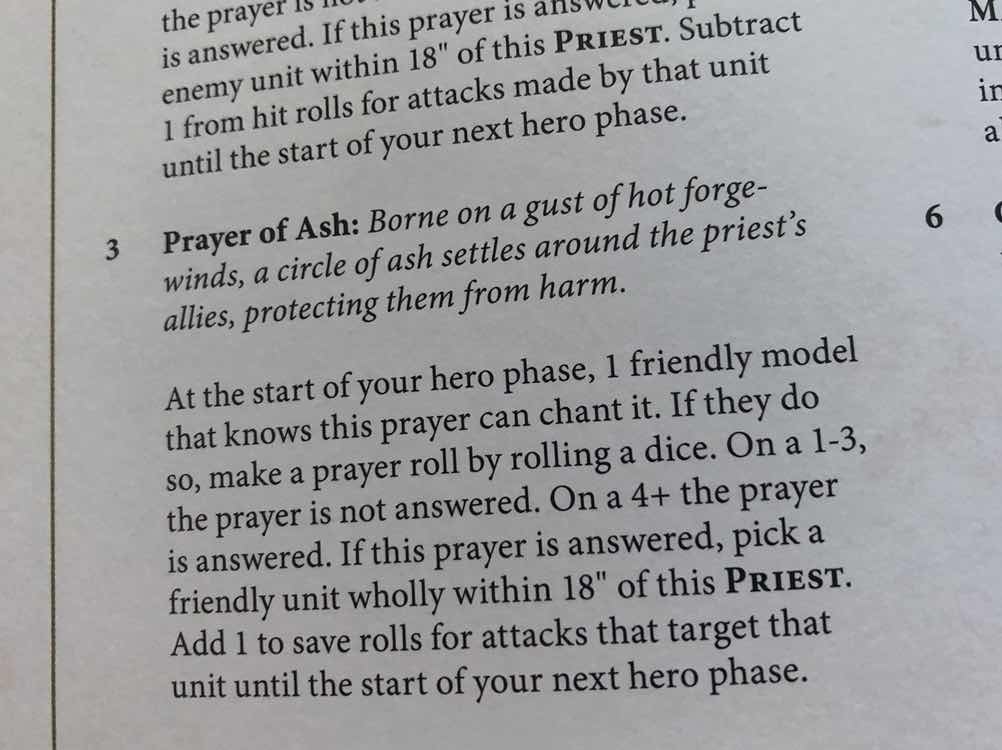 There are some extra abilities you can take if your force is from 1 of 4 lodges. The Lofnir seems pretty over powered, as each Magmadroth is able to have a trait instead of just 1. Also, if you are fighting a pitched battle, you can take an extra behemoth. 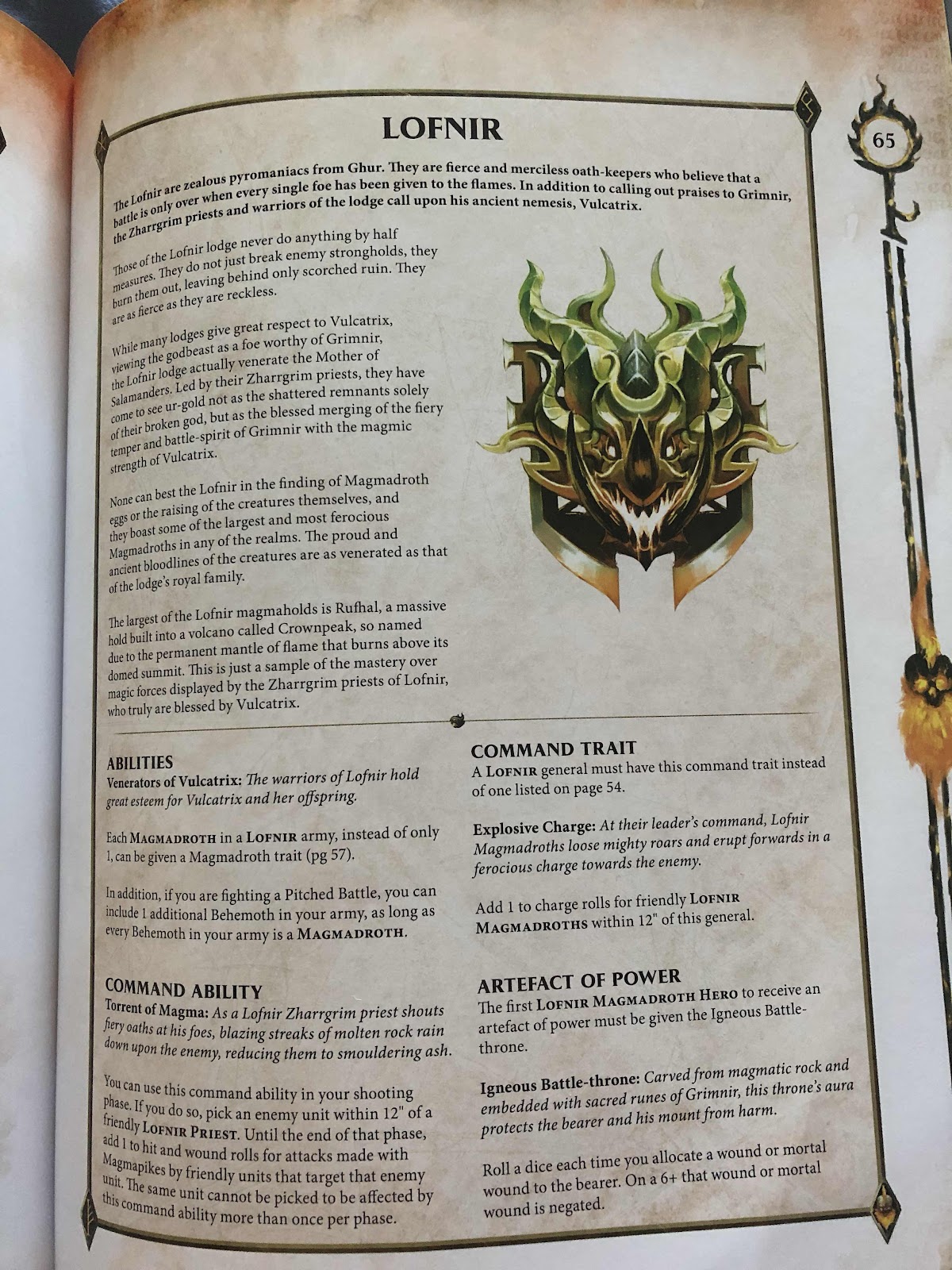 There are of course some new battleplans, and also information on using the Fyreslayers in a Path to Glory campaign.

Now on to the actual warscrolls, I will have a look at what’s new. Firstly, we have the new piece of scenery, the Magmic Battleforgr. This piece of scenery helps nearby Priests cast their prayers, and can also help with save rolls of all Fyreslayer units on the battlefield for a turn. I really am not a fan of most of the Scenery models that are coming out for Age of Sigmar, as most of them do not make sense. I mean, does a lodge just carry this forge along with them to battles? The only way it makes sense to me is if a lodge is defending their Magmaholds. 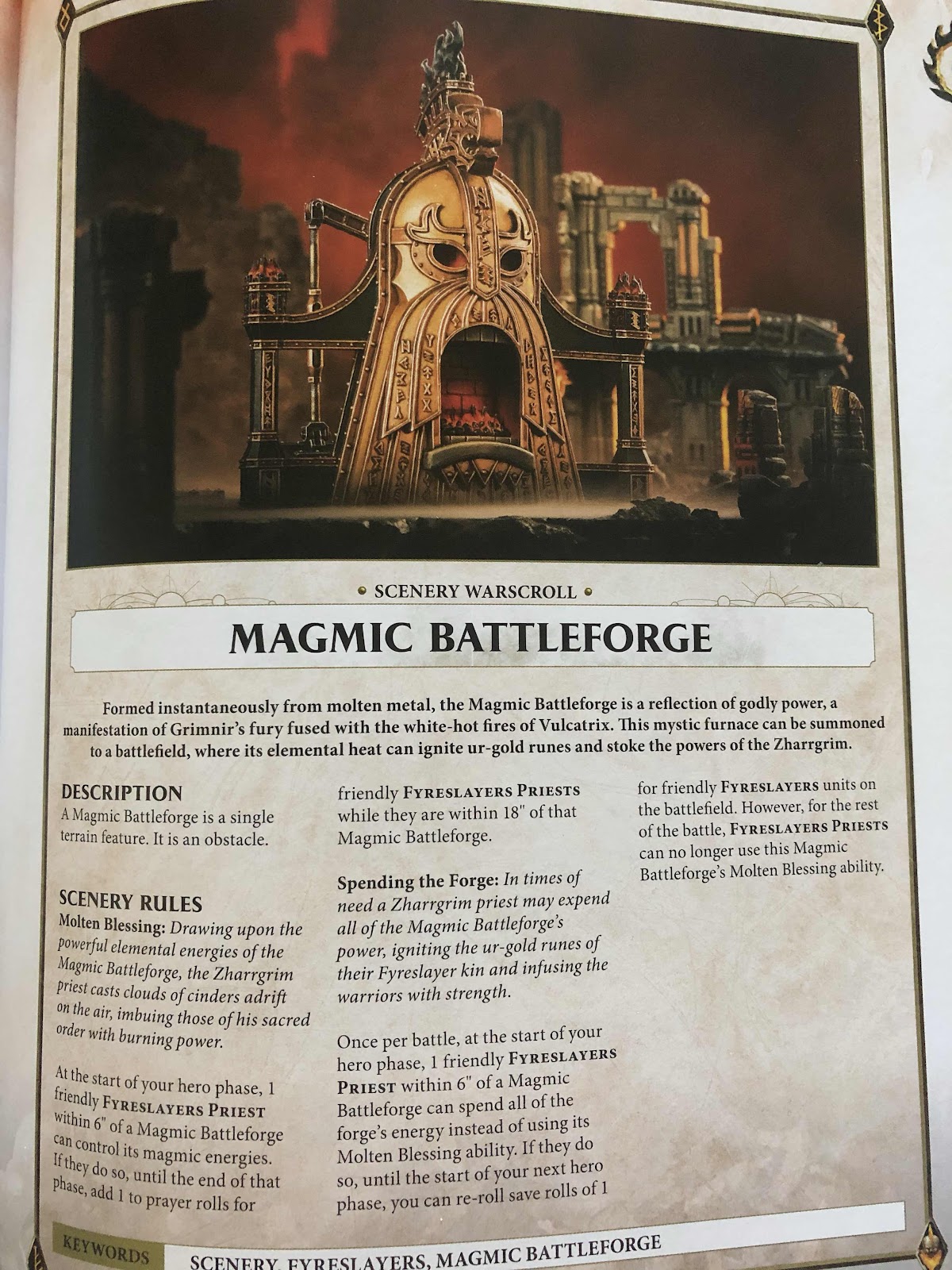 Finally, we are up to the new Endless Spells. All of these are pretty great to be honest. You have the Runic Fyrewall which is line of sight blocking, and also allows nearby friendly units to re roll save rolls of 1. The Zharrgron Flame-Spitter and the Molten Infernotg are both offensive spells with the ability to inflict multiple mortal wounds. 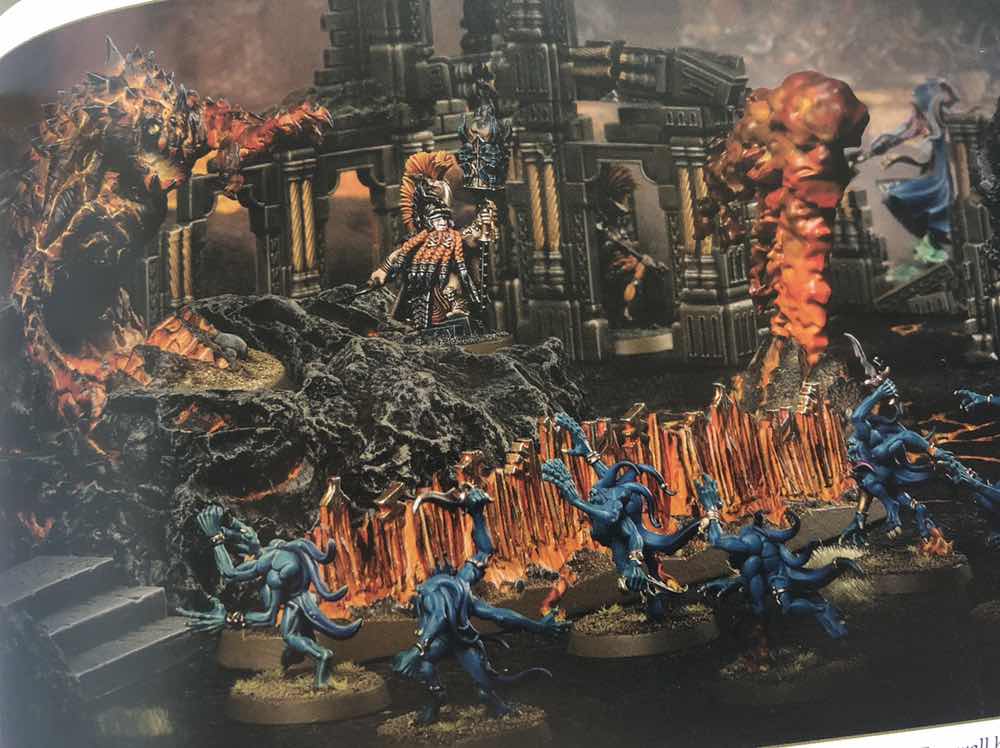 Overall, I quite like this battletome. Possibly because these are one of my favourite armies released in Age of Sigmar so far, or it could be because this army is pretty low fantasy, which is exactly what I like.

Let me know what you think in the comments down below. Also, if there are any questions you have, or if you would like me to cover something in more detail, then please let me know.

Email ThisBlogThis!Share to TwitterShare to FacebookShare to Pinterest
Labels: Fyreslayers