As well as the new Skaven Battletome, we were also sent a copy of the new Flesh Eater Courts Battletome to review, so here it is. 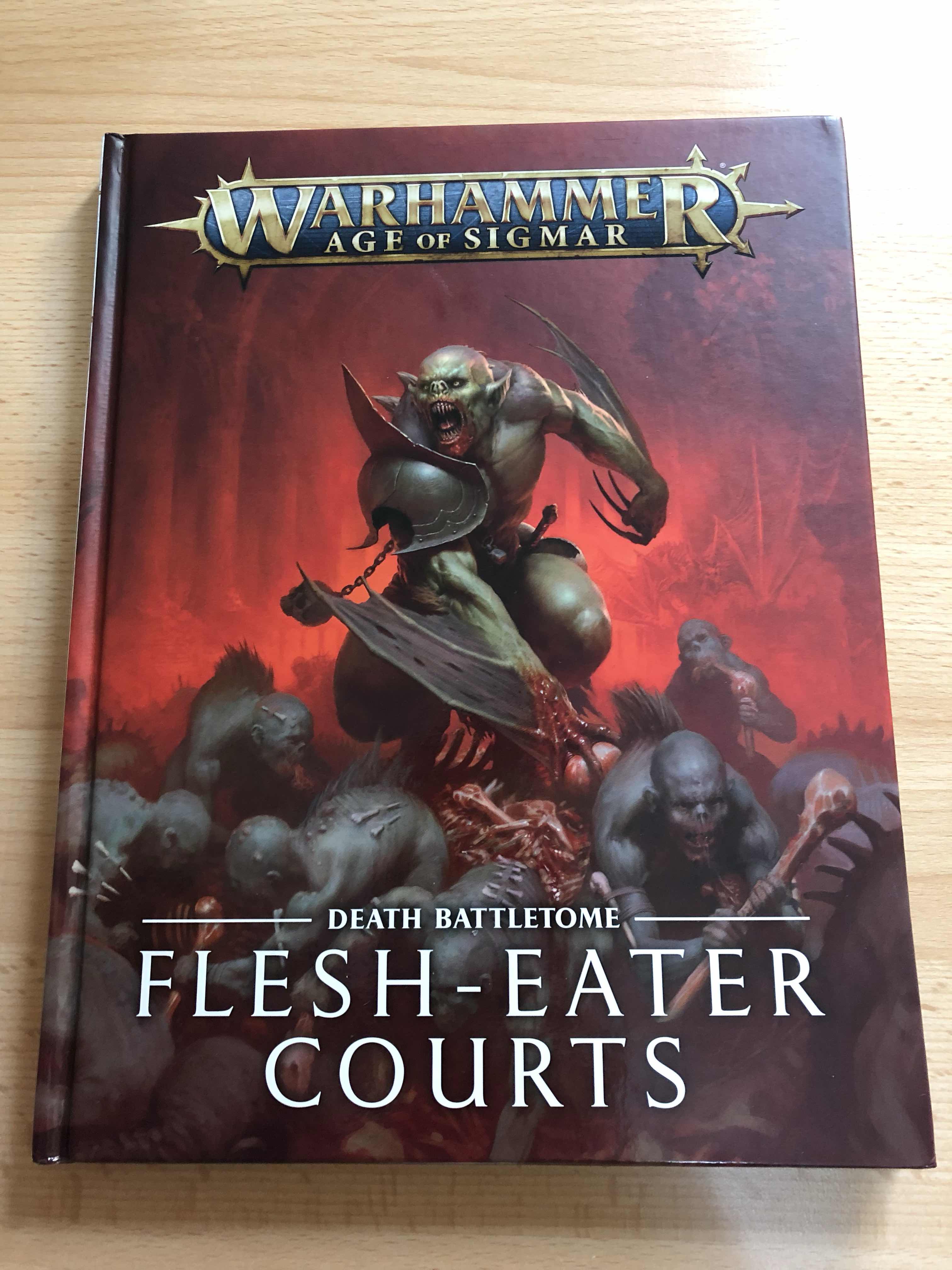 The best place to start when talking about the Flesh Eater Court is their origin. Back in the Age of Myth, there was much loved Lord of Death. He was known by several names, such as the Blood Rose Prince, Ushoran the Handsome and Sumeros Summerking, as well as many others. This Lord used to by highly welcomed by civilisations who paid their due to Nagash. He would help the week and infirm pass into the Underworld, and would unleash the full measure of his wrath on any who stood in his way. 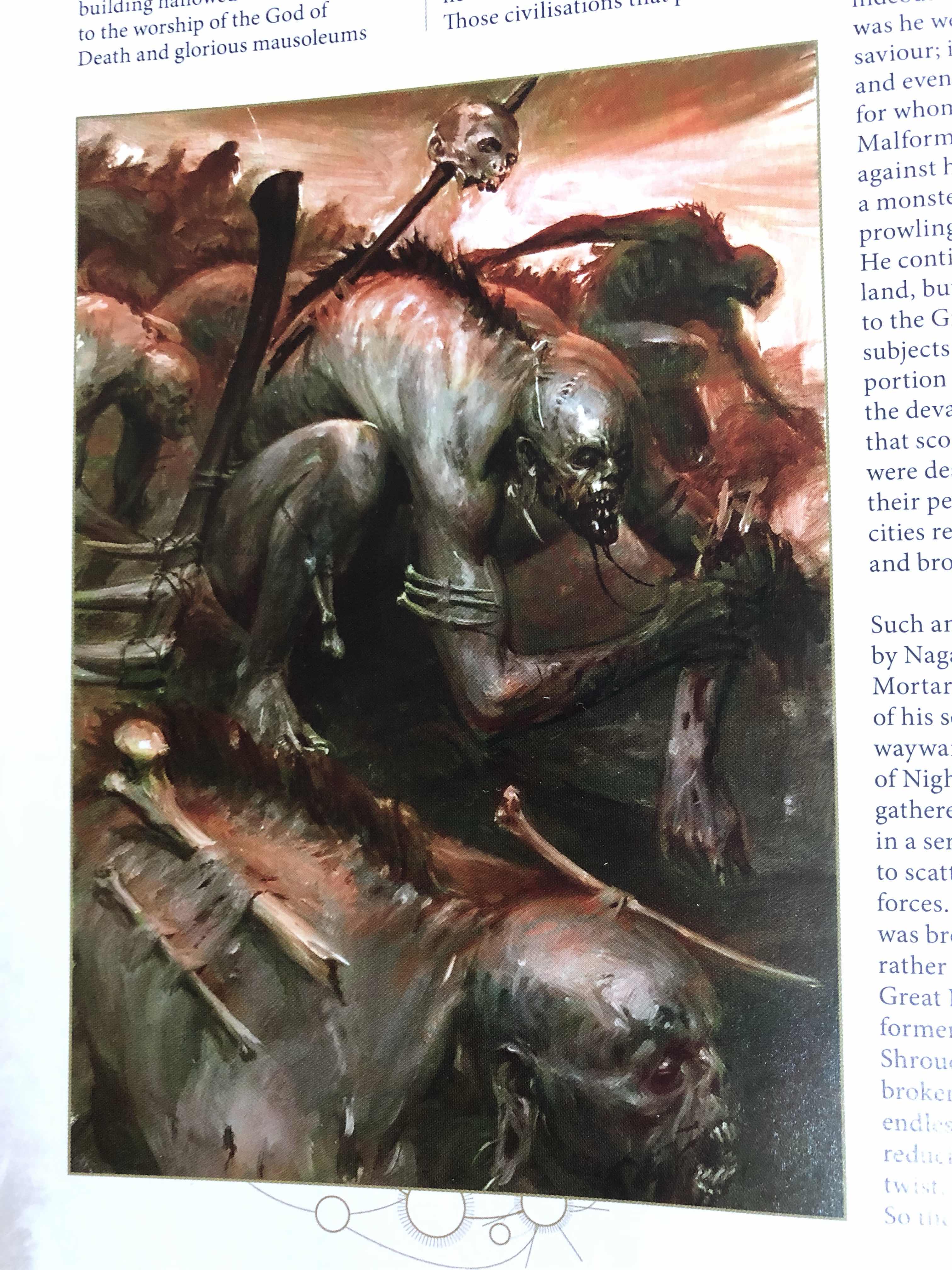 It is unknown how this Lord fell out of favour with Nagash, but as a result of this, he was punished with a hideous transformation. He was shunned by those who once welcomed him, even to the extent of some trying to hunt him down. This filled him with so much anger and bitterness, that he became a monster like no other. Together, with his knights still loyal to him, he spread his fury. Scores of Nagash’s kingdoms were destroyed, their lords slain, their people’s torn apart and their cities reduced to naught but the ruins  and broken corpses.

Obviously, Nagash could not let these continuing actions go unpunished, so he ordered his Mortarchs to capture him. With their armies, they were able to do this, destroying much of Ushoran’s forces. They brought Ushoran before Nagash, who instead of executing him, decided to imprison him in a towering edifice of broken promises called the Shroudcage. Such was this prison, that it’s walls reflected endless untruths upon Ushoran, which in turn reduced him to a raving wreck, as twisted in mind as he was in body. 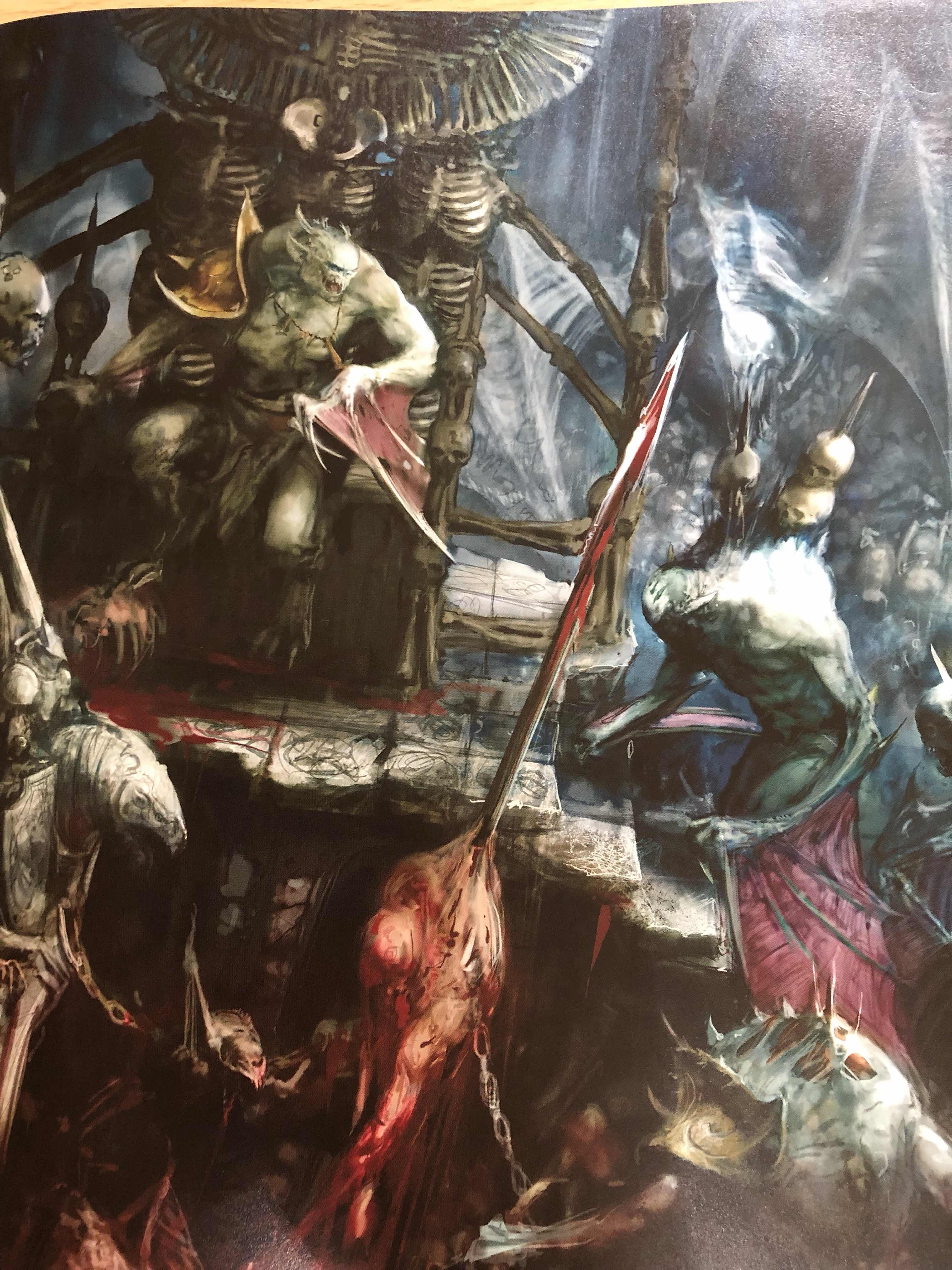 As Sigmar marched on Shyish, enraged by Nagash’s apparent betrayal, he destroyed the Shroudcage, which resaulted in the release of Ushoran. Some even believe it was Ushoran’s surviving followers who lured Sigmar to the Shroudcage with the purpose of letting him escape.

Ushoran, now know as the Carrion King, started to suffer delusions, where he once again believed he was the noble lord.  Where there were innocent civilians, he would see his enemies. His delusion spread to his followers, who also began to see themselves as noble knights, protecting the realm from invaders, where in fact they are monstrous ghouls feeding on the flesh of enemies and innocents alike.

During this time, Nagash was laid low by Archaon, and his body was taken to Stygxx to recover. In Nagash’s absence, the empire of the Carrion King expanded greatly, recruiting from depraved mortal cannibals, which were plentiful indeed. They would feed from him, turning into abhorrants themselves. Many of these in turn went on to create their own courts, and thus the cycle continues. 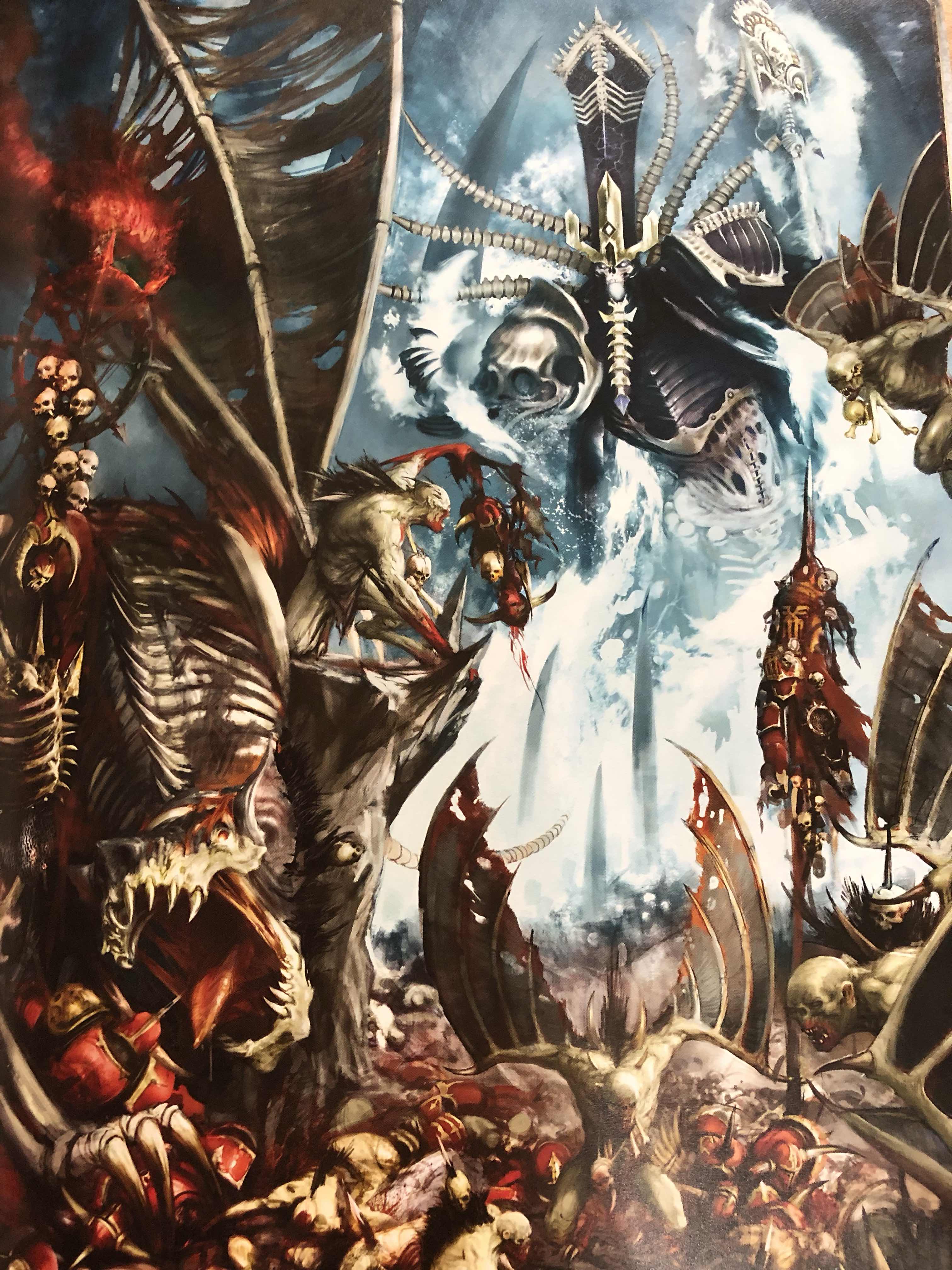 No matter how far the mordants and their abhorrant kings spread throughout the realms, their wretched presence always draws the gaze of Nagash. The Lord of Death has long held plans for the Flesh-eaters. Despite the strange place they occupy, being neither fully living nor truly dead, Nagash considers them his own, and there has been a shadowy struggle thought between the Flesh-eaters and that deathless God for centuries. Some have journeyed to the Realm of Death to kneel before the necromancer, their kings cowed be the Death God’s might. Many, however, have purposefully put distance between themselves and their would-be overlord, fearful of the revenge the God King might visit upon them.

There are of course some very good painting guides in this Battletome. I especially like the way that this is painted 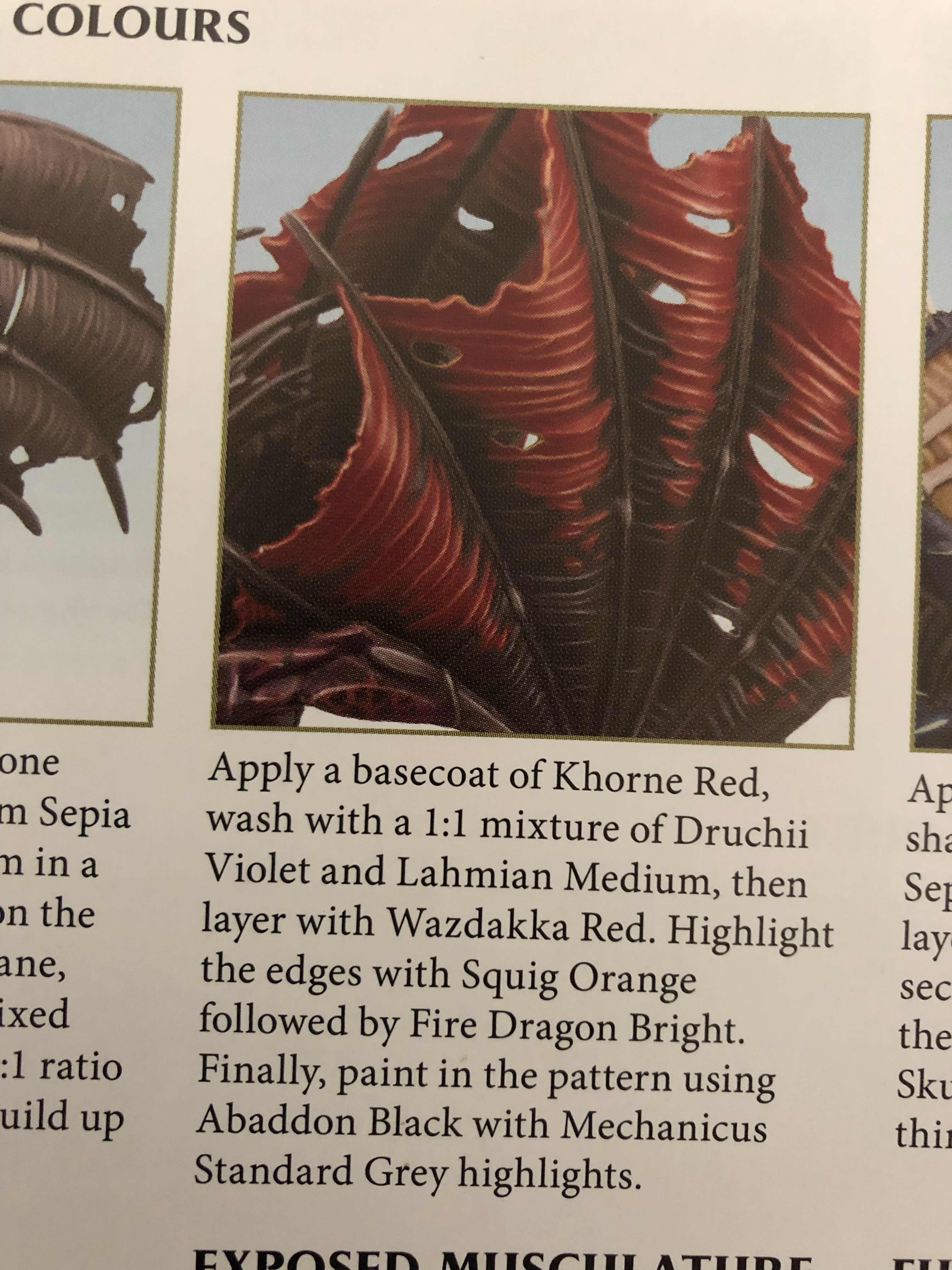 Now I’m going to have a look at some of the rules available to all Flesh Eater Court players.

First up is the Battle Traits. I really like the command Ability, Feeding Frenzy. This lets you select a unit of Flesh Eater Courts who has just fought in the combat phase. That unit can now pile in and attack again. So, imagine a unit of 20 Ghouls. They get 3 attacks each, so 60 in total with 4+ to hit, and 4+ to wound. That is an average of 15 wounds. Then if they get to attack again, bringing the total up to 30 wounds in one round. Even against the toughest of opponents, this will cause a lot of damage. 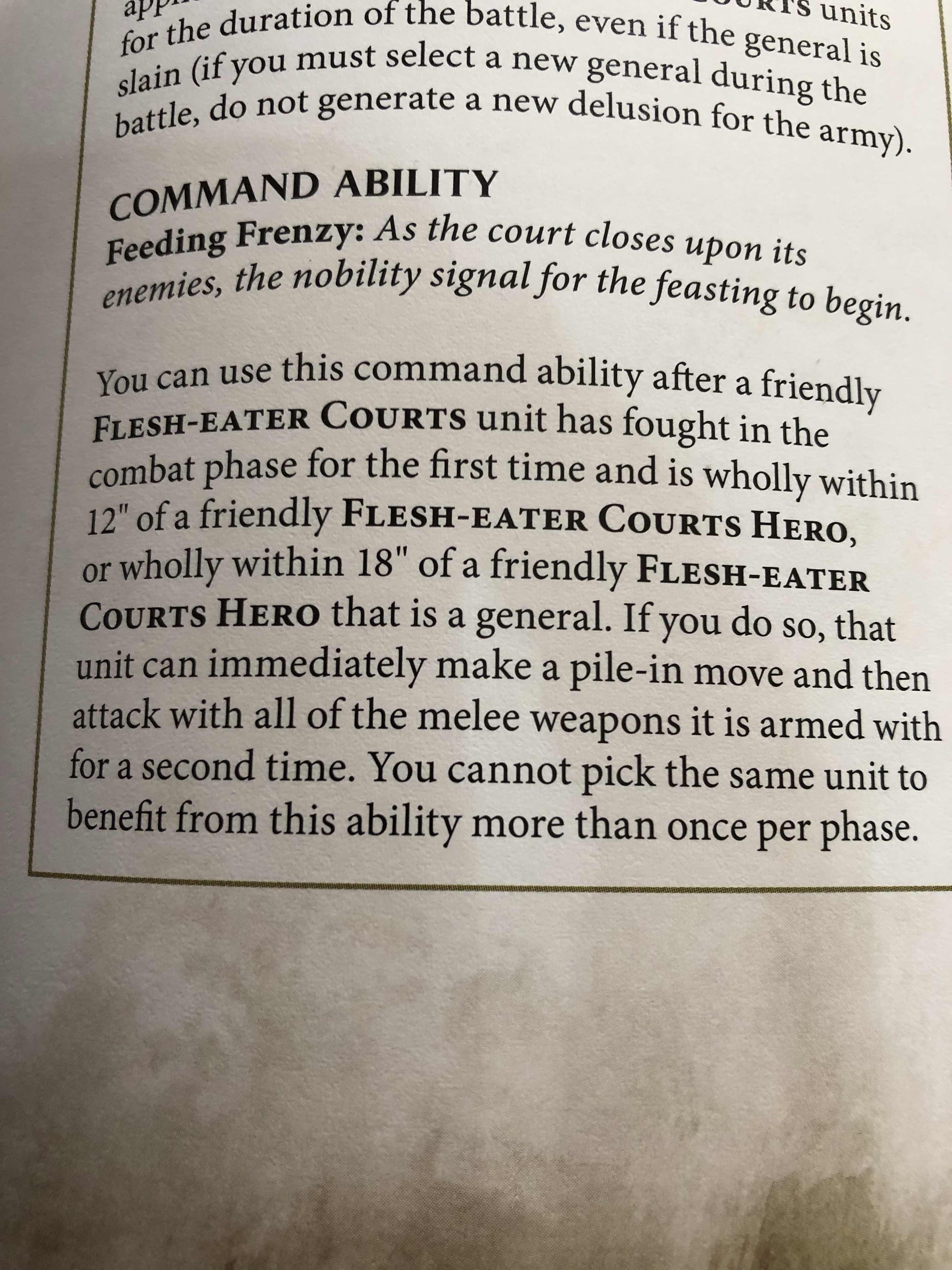 Next up, Command Traits. The Bringer of Death has to be a pretty safe option, as re rolling wound rolls is pretty big. 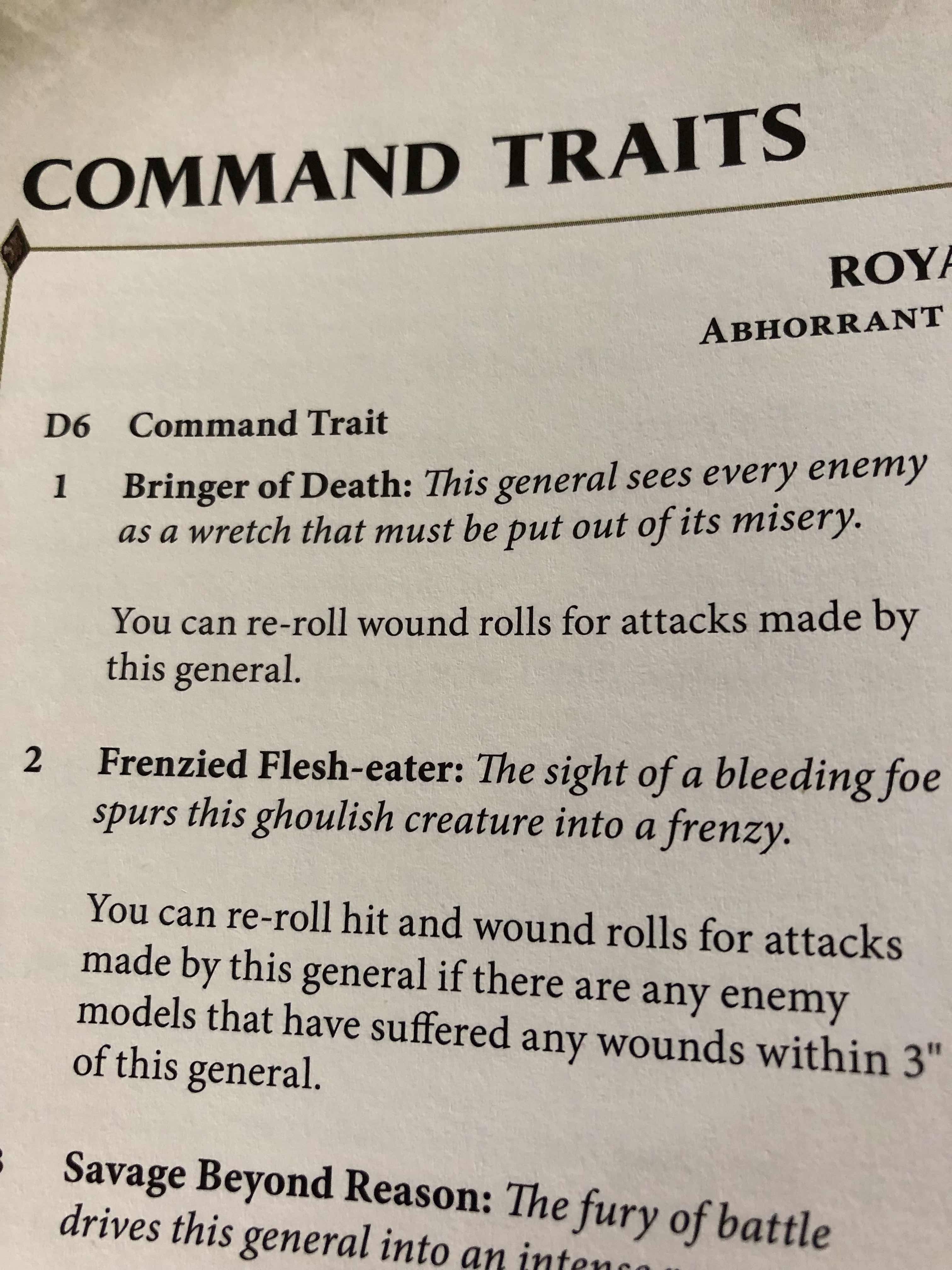 On to the Artefacts of Power. The one that stands out for me, is the Blood-river Chalice. This allows you to heal up to D6 wounds allocated to the bearer. Since most Flesh Eaters are fairly squishy, anything to make them a little more survivable is a bonus. 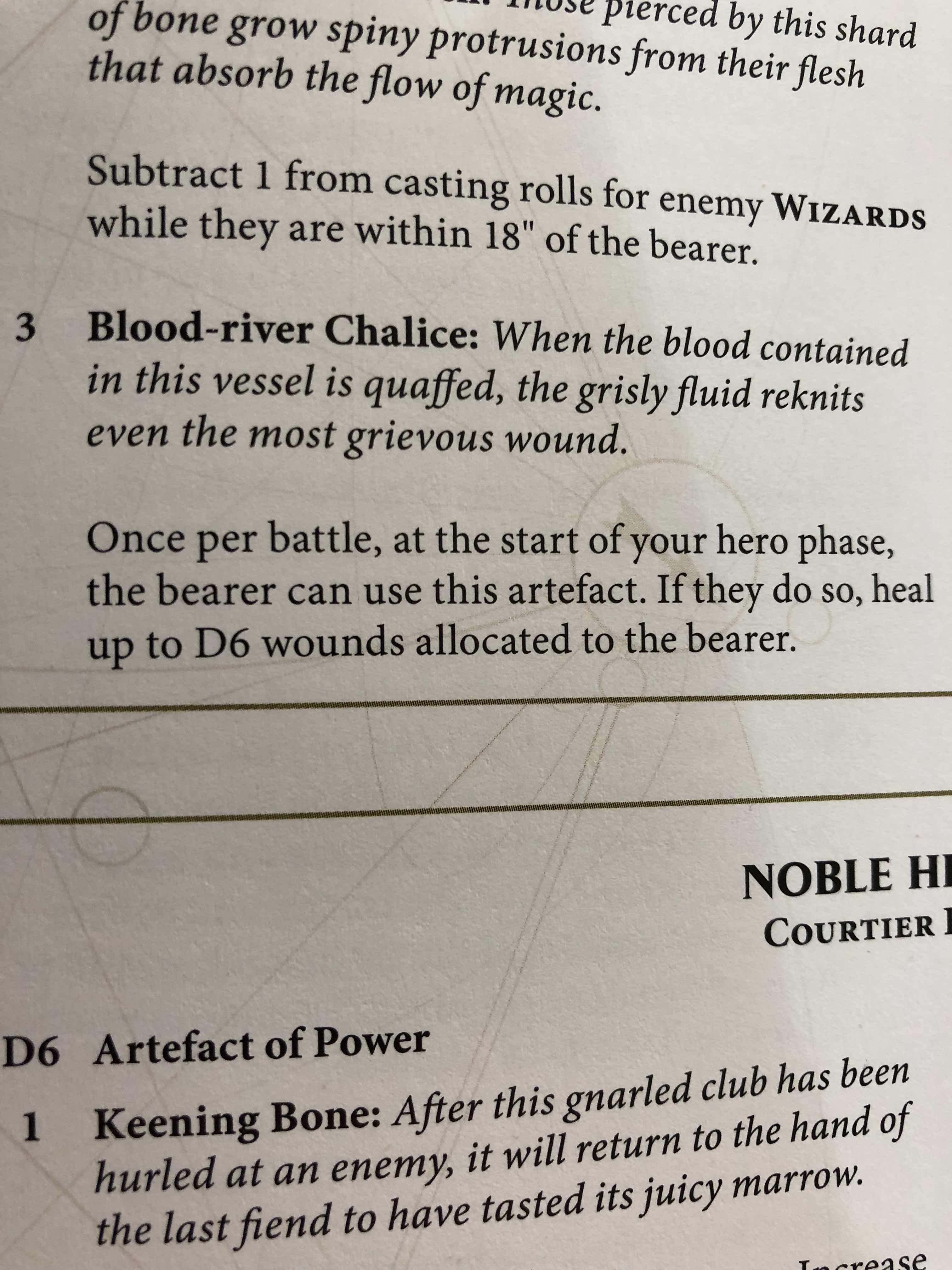 Next in the Battletome, is Spell Lores. Most of these are pretty situational, however the one that I think may be the most used is Bonestorm. This lets you roll a dice for each enemy model unit within 12”. On a 2+, they get a mortal wound. Pretty good to use when your spell caster finds themselves surrounded. 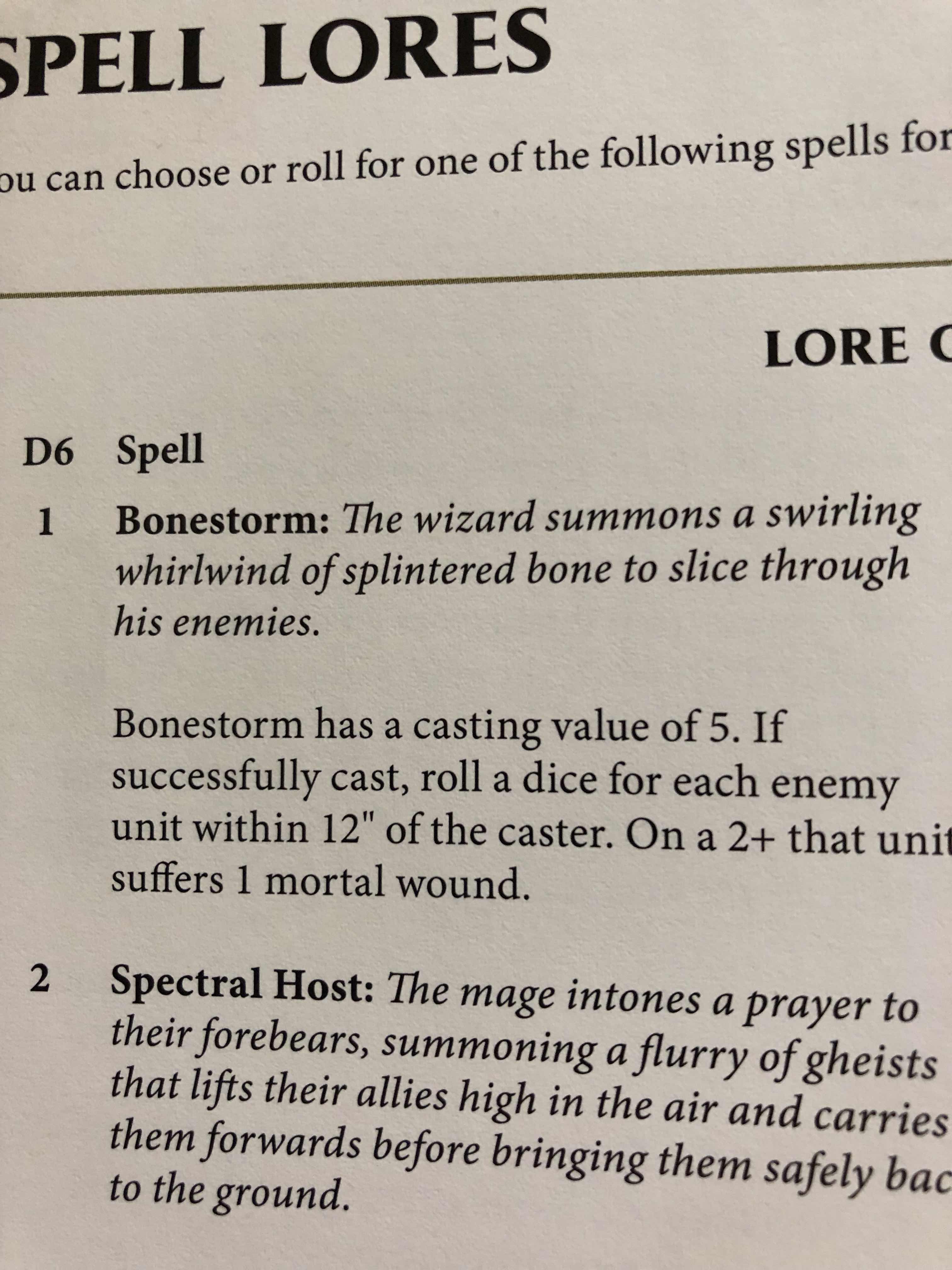 Now on to the actual warscrolls, I will have a look at what’s new. Firstly, we have the new piece of scenery, the Charnel Throne. This piece of scenery inspires nearby friendly units by adding 1 to their Bravery. In turn, this also affects nearby enemy units by subtracting 1 to their Bravery. This also allows an Abhorrant Archregent to use a coulple of abilities without using a command point. For me, the only good thing about this is the model itself. It makes no sense however to have this set up on any battlefield unless the battle is taking place in the Courts lair. Any other scenario will look stupid and make zero sense. The next unit is the Abhorrant Archregent. He looks like a pretty good unit to take. Not a game changer by any means, but fairly solid. He is basically a slightly better version of the Abhorrant Ghoul King, with an extra wound and also the ability to heal up to 3 wounds every turn. Also, the model does look great.  I would however have to try and find a way to convert him so he is not bringing around that ruined pillar everywhere he goes. 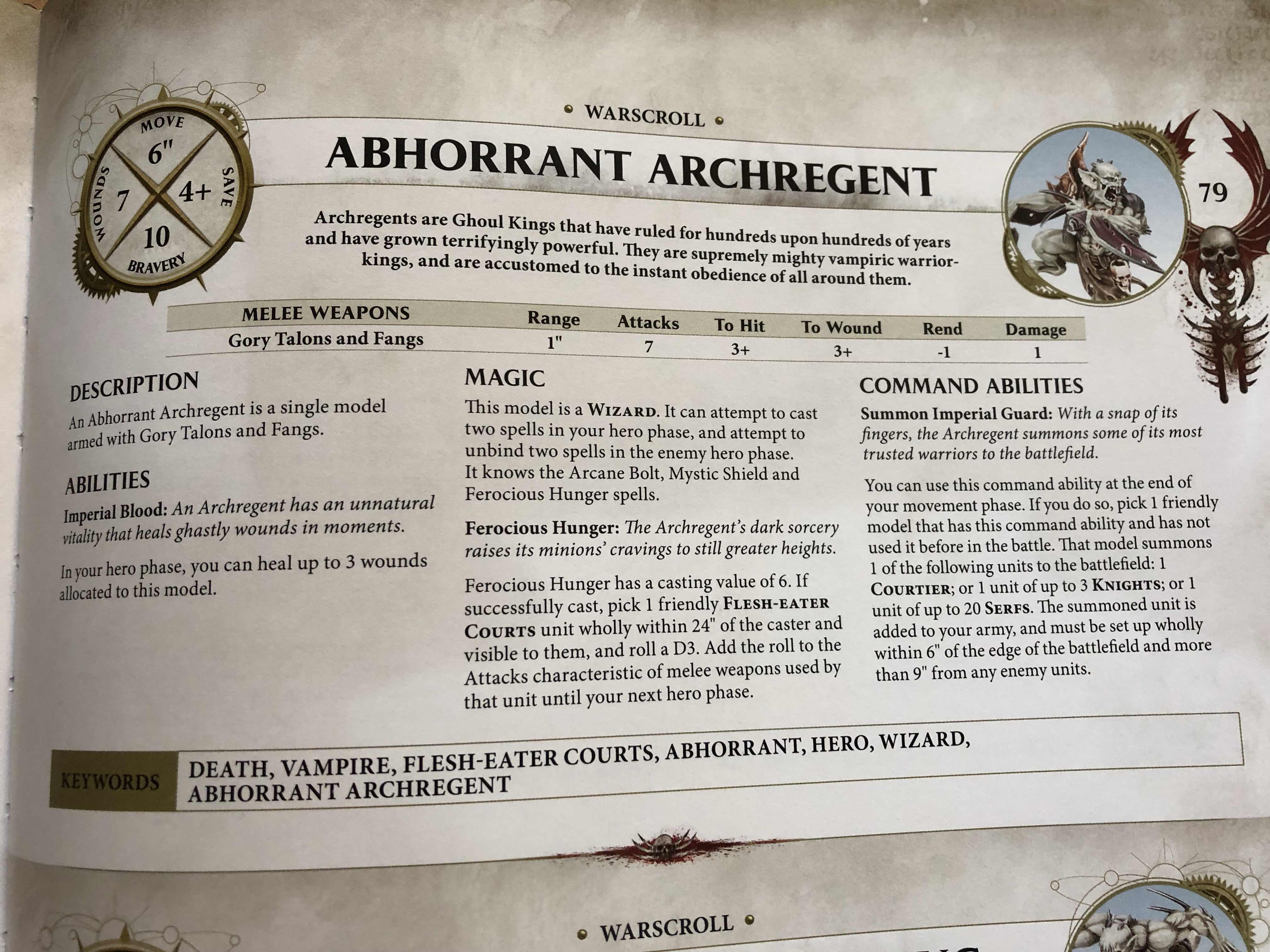 Finally, we are up to the new Endless Spells. All of these are pretty great to be honest. You have the Cadaverous Barricade which could be used to effectively slow enemy units down. The Chalice of Ushoran would be good to set up where you know a lot of fighting will take place. The more enemy models slain near the chalice, the more chance you have of healing friendly units, or even bringing back slain models. Lastly, you have the Corpsemare Stampede. This has the ability to cause some fairly hefty mortal wounds to units that it passes over. However, on the flipside it could be used against you. 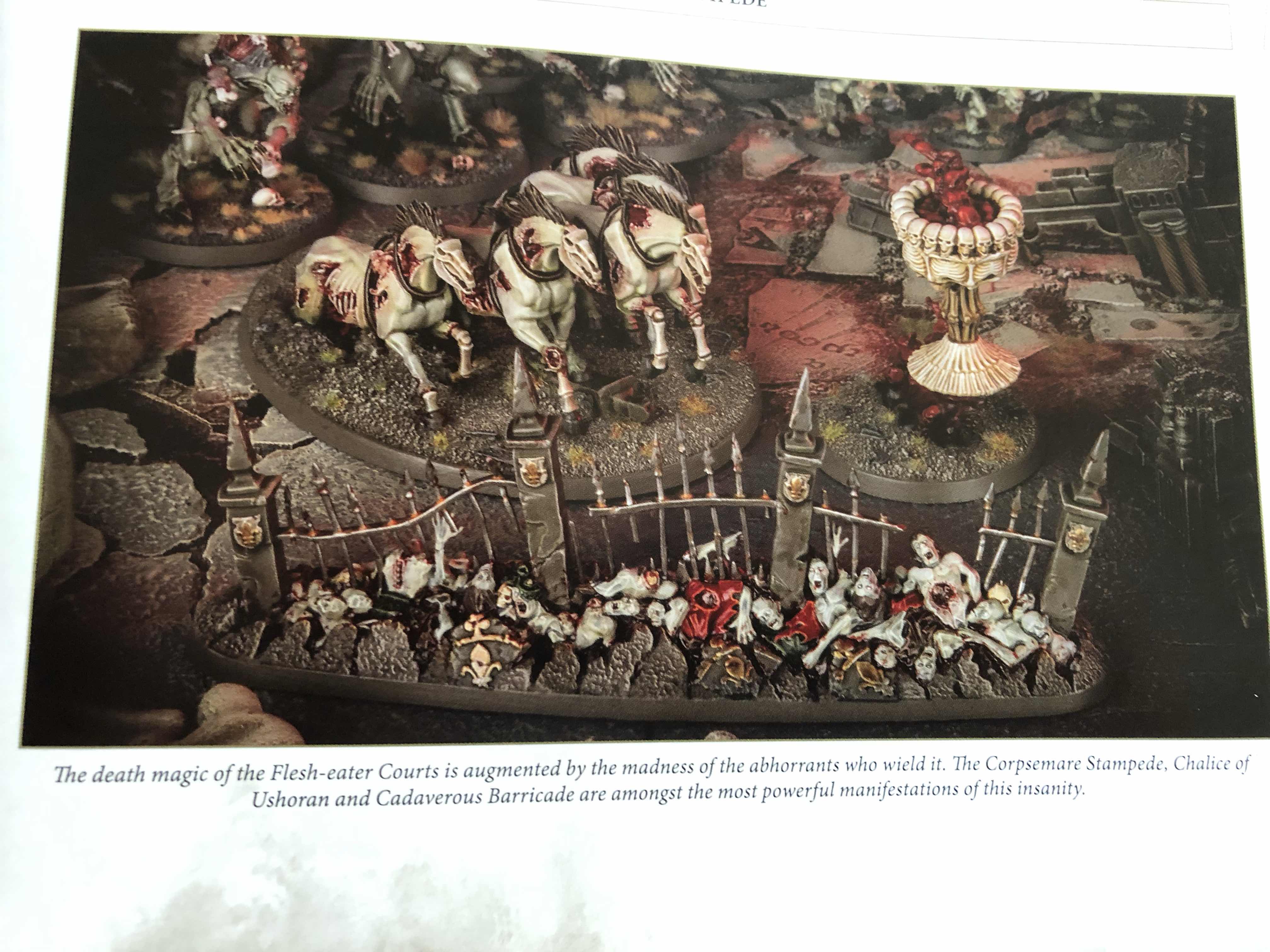 Included in the Battletome, is a fairly interesting Battle plan, where an army unknowingly finds themselves surrounded in a Courts lair. There is also of course details about using Flesh Eater Courts in a Path to Glory campaign.

Overall, I really like this battletome. Possibly because I am a Flesh Eater Courts player myself, click here to see my army https://ageofwarhammer.blogspot.com/2017/03/ghrolls-flesh-eater-showcase_22.html?m=1. Or, it could be because this army is really gritty and dark, which is exactly what I like. Even though some of the models are quite old, they still look great next to any of the newer releases for Age of Sigmar. Also, there is not a mushroom in sight :-)

Let me know what you think in the comments down below. Also, if there are any questions you have, or if you would like me to cover something in more detail, then please let me know. Also, check back tomorrow for a review of the new Skaven Battletome.