We have been fortunate enough to have been sent the new Death Guard codex to review. So here we go :-) 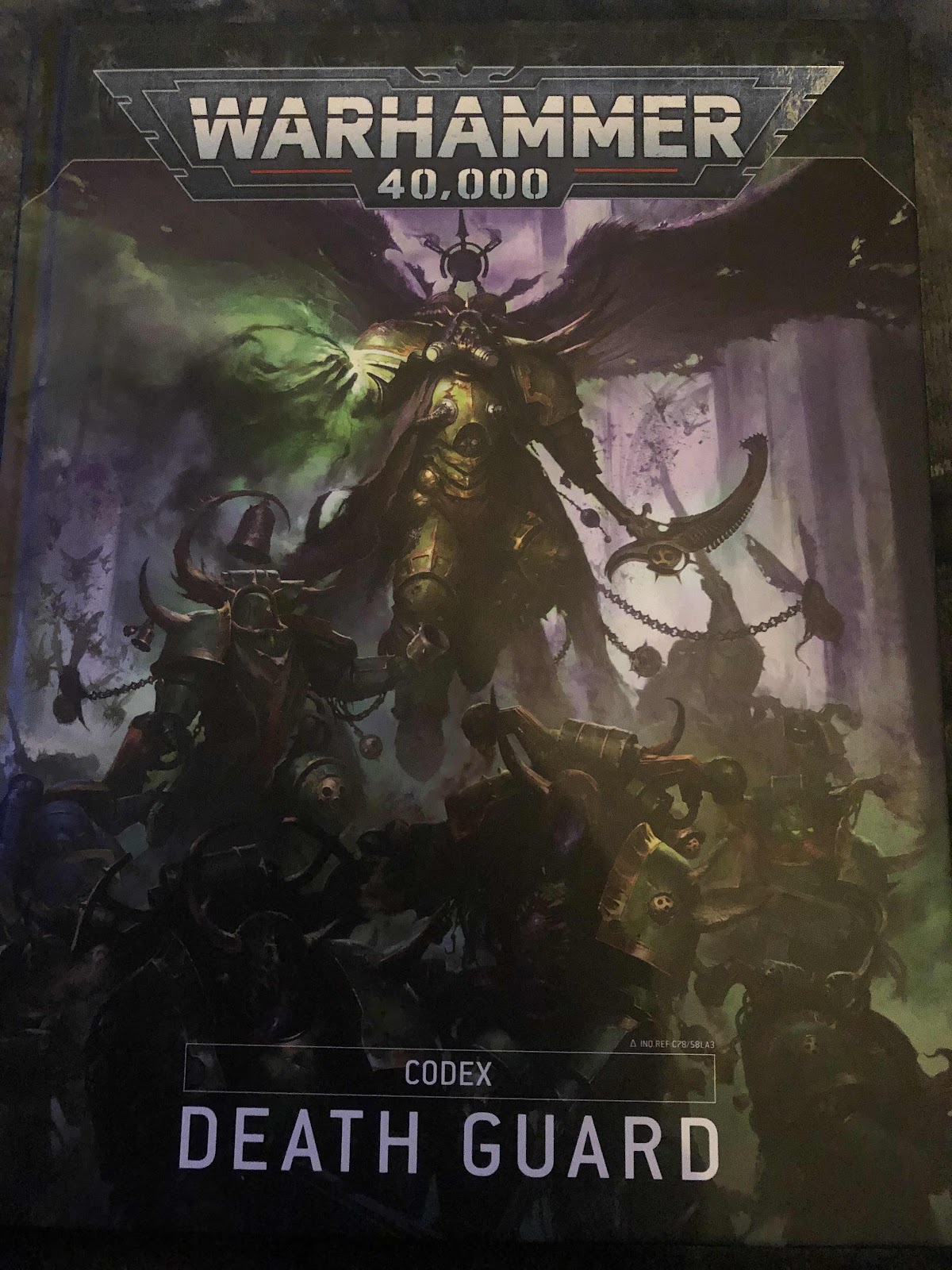 I will start off with the new character, the Lord of Virulence. 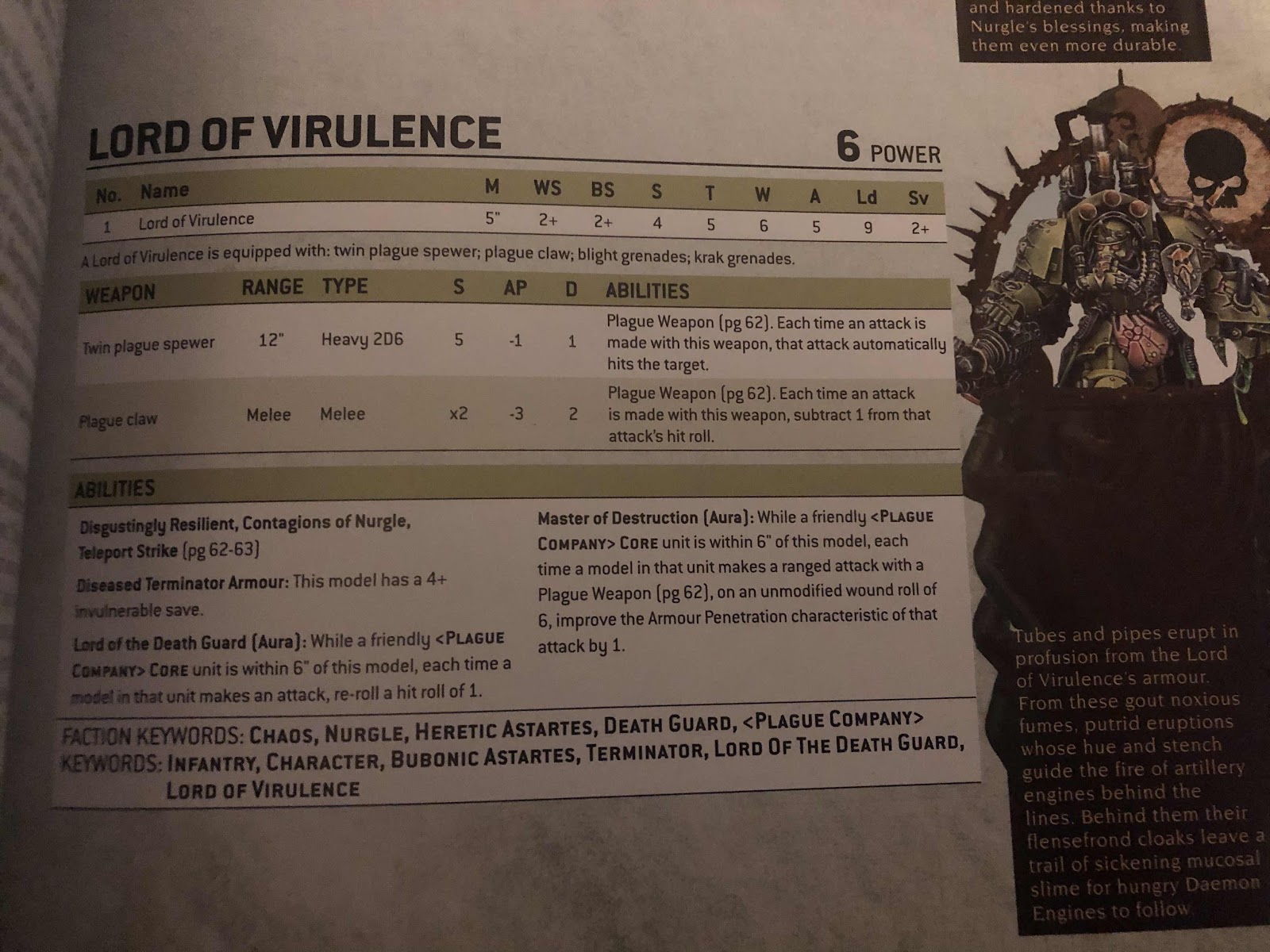 As you can see, his stat line is the same as most the other characters for the death guard, however, he is aimed with a pretty deadly flamer. The twin plague spewer is Heavy 2D6, S5, AP-1, D1. As with all flamers, this automatically hits, but it’s also classed as a plague weapon. This means you re-roll wounds rolls of 1.

He also comes with a plague claw, which is his melee weapon. Sx2 (8), AP-3, D2. This also is classed as a plague weapon.

He comes with a 4+ invulnerable save, due to his diseased terminator armour.

As you can see, he can dish out a ton of damage at close range, and just like most death guard, is really survivable.

I must also add that I absolutely love the model. If I was to do a death guard army, he would definitely be at the top of my list.

I have had a read of all the stratagems included in this codex, and just wanted to mention a couple of my favourite. 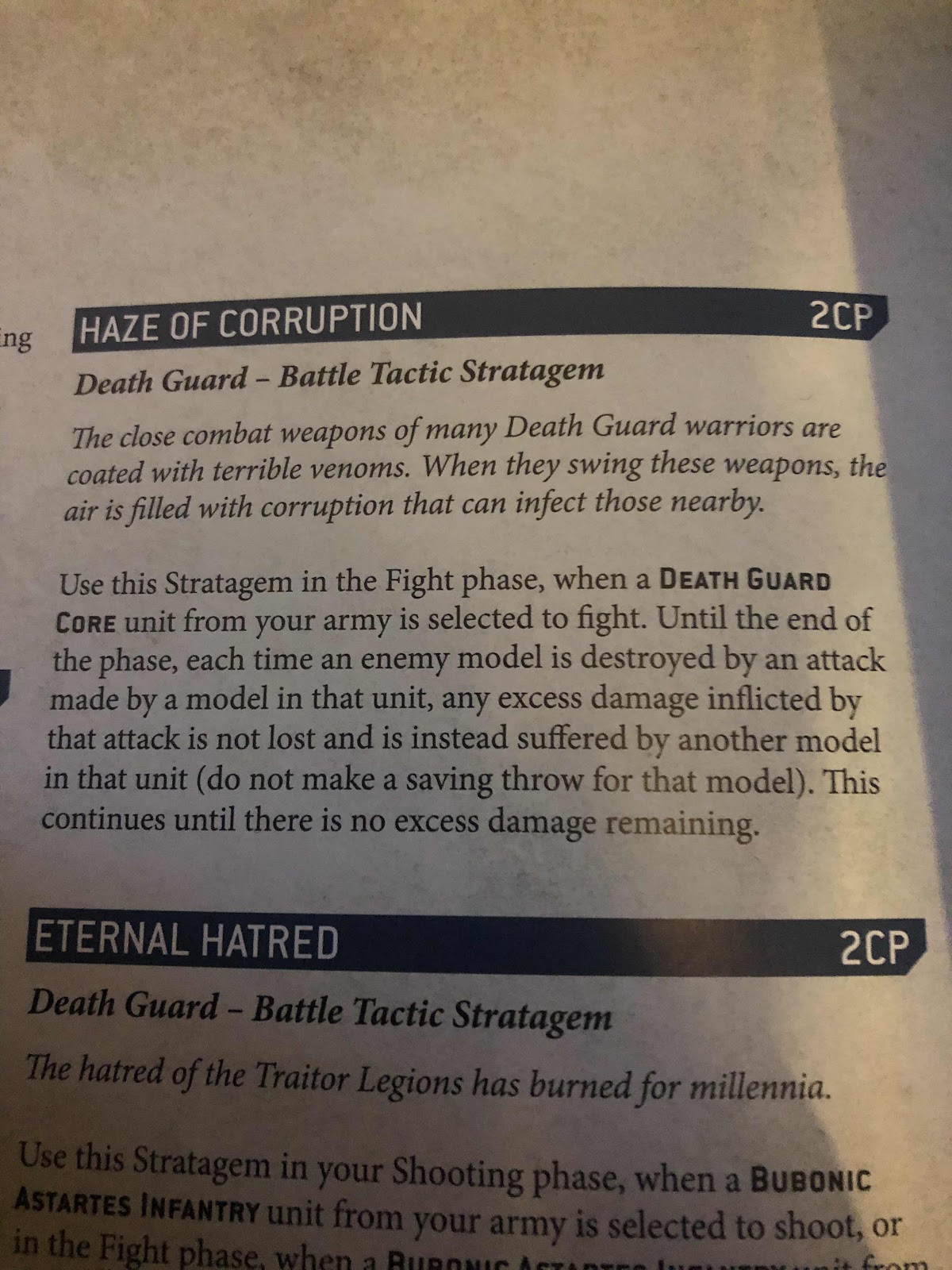 First up is Haze of Corruption. This has a cost of 2CP and causes damage to carry over to other models in the same unit. It’s always a bit annoying when you have wasted damage left over from a kill. This gives you the opportunity to kill multiple models with a single shot. 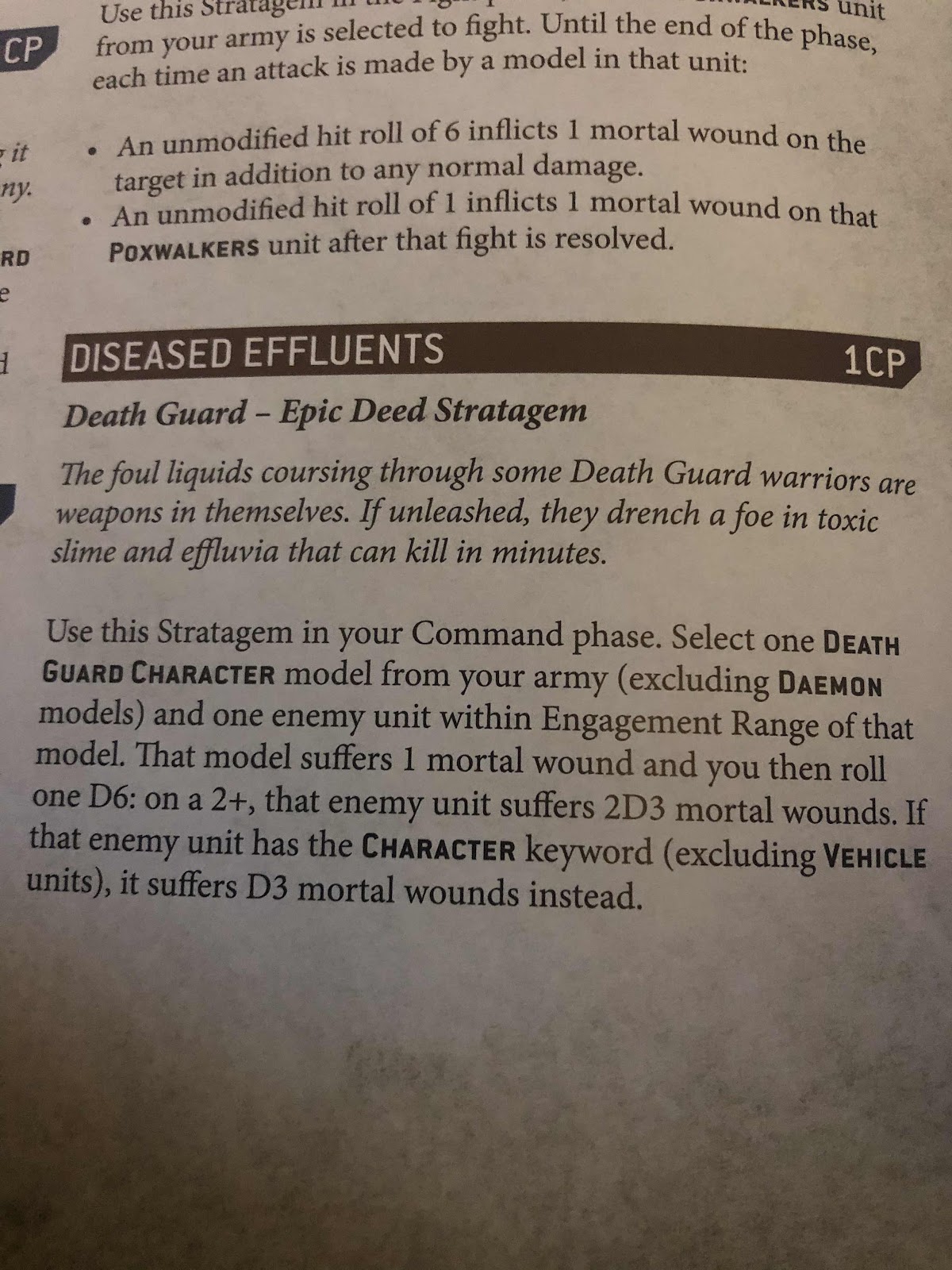 The second one that really good out for me is Diseased Effluents. For this one, you get to choose a death guard character, and 1 enemy model that is in engagement range. The death guard take 1 moral wound. Then you roll a D6, on a 2+, the enemy model takes 2D3 mortal wounds, D3 if they are a character. This only costs 1 cp, and I think is a great way of dishing out damage before you even start the combat phase.

Next up is the deadly pathogens. These are upgrades that you can give any death guard characters in a battle forged army. These automatically adds 1 to the strength characteristic to a plague weapon, and you can either add 1 to the power rating, or each one has their own points value. 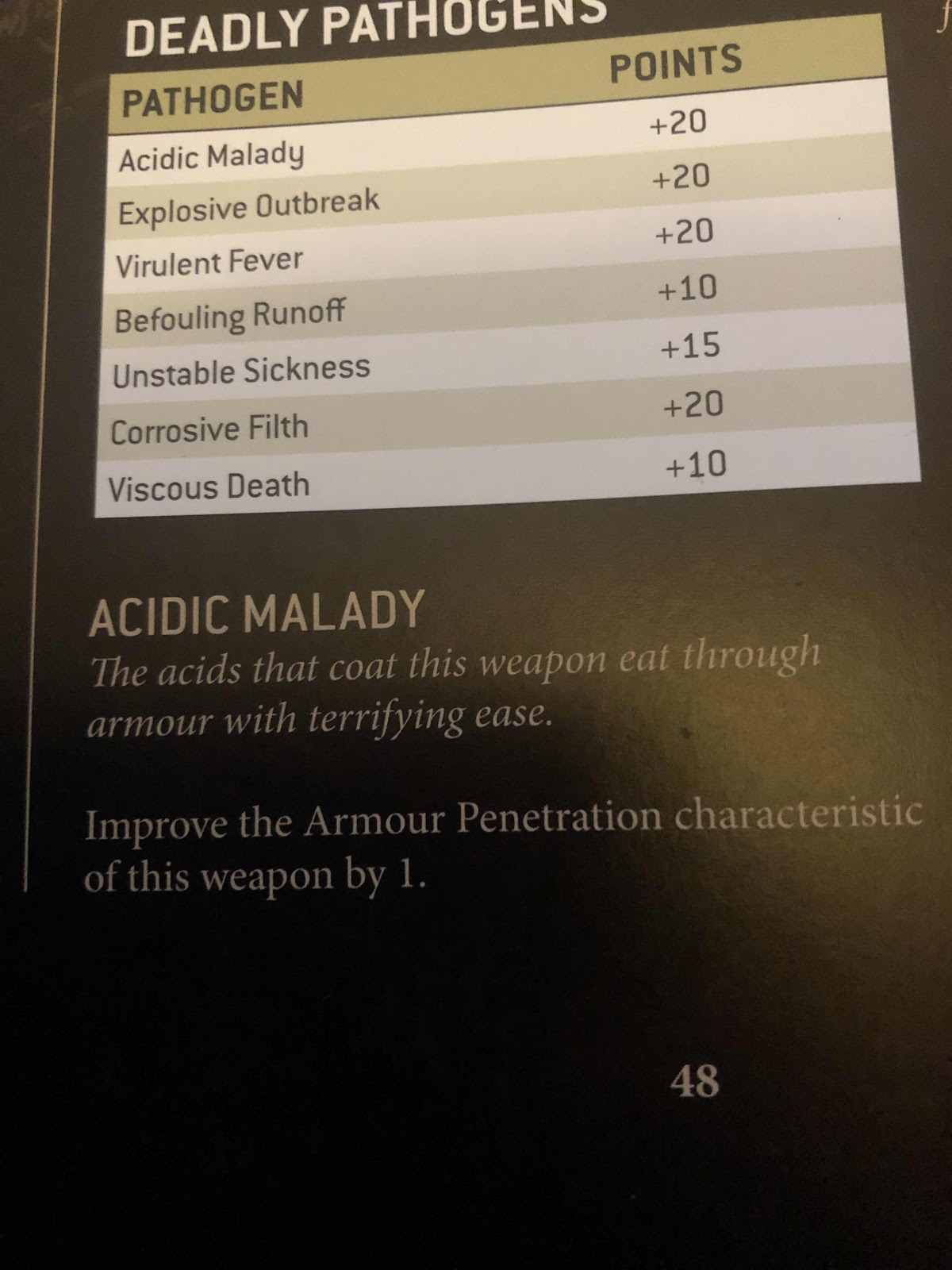 The one I like is acidic malady. It’s a pretty simple one that just improves the weapons armour penetration by 1.  So take the lord of virulence as an example. You could make his flamers AP-2. Brutal!!!

Moving onto the warlord traits, all of them are really good, and it was quite tough to pick a favourite. 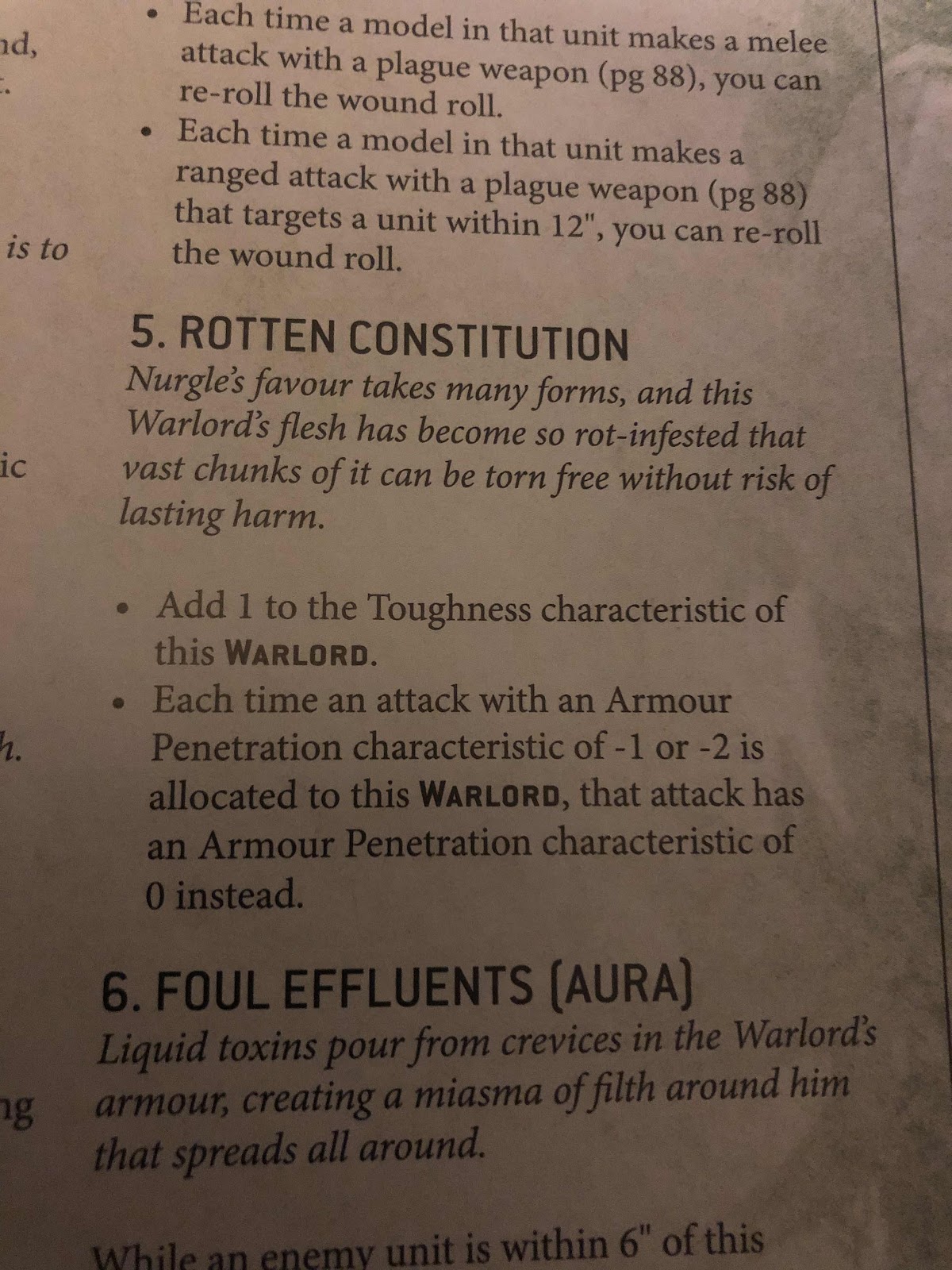 I really like Rotten Constitution. This added 1 toughness to the warlord, also, weapons with an armour penetration of -1 or -2, is treated as AP0 when targeting the warlord. This would make your warlord even more survivable than normal

Most of the relics available, Are very situational, and can only be a equipped on people with certain weapons. Quite a safe pick for me and one that anyone can use is the Plague Skull of Glothila. Once per battle, the bearer can use this item. When it does, you pick an enemy unit within 6” and roll 7 D6s. Every 4-5, that unit suffers 1 mortal wound. And rolls of 6, the unit suffers D3 wounds instead. This is a really good way of weakening a unit before the combat phase. 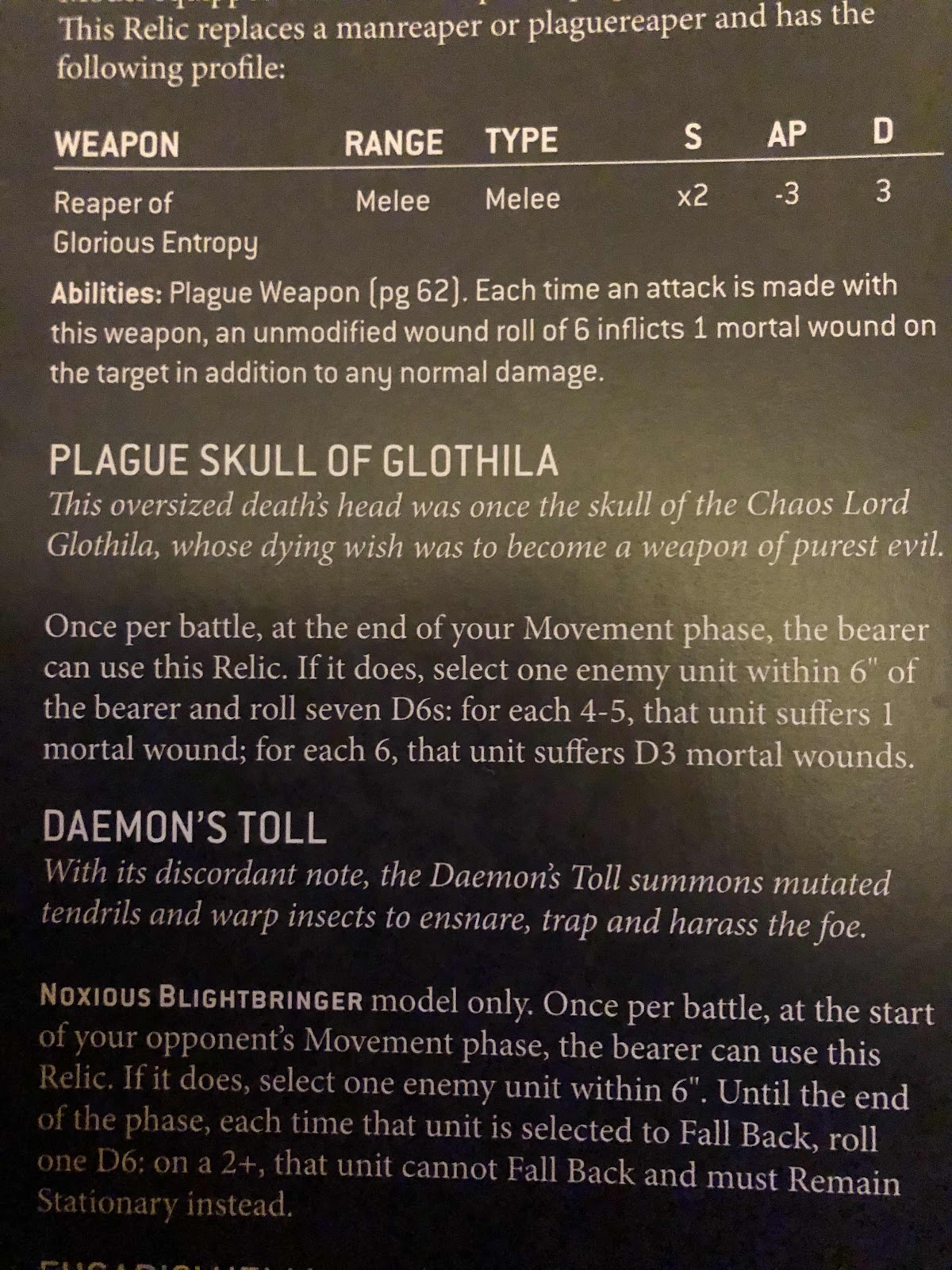 There really is so much more I could mention about this brilliant codex, but I more thing I will say, is now I am extremely tempted to do a Death Guard force now. I really like the idea of a tough, low model count army, and there isn’t many batter at that than the Death Guard.

Let me know what you think of the codex, and if you have any questions in the comments down below.