Hello everyone,
I’m back the rules part of the Iron Hands review!
Definitely a very interesting time to be an Iron Hands player as I’m sure the chapter has gained plenty of new players after the supplements release!
So, let’s start with the overall chapter tactics...
Chapter Tactics 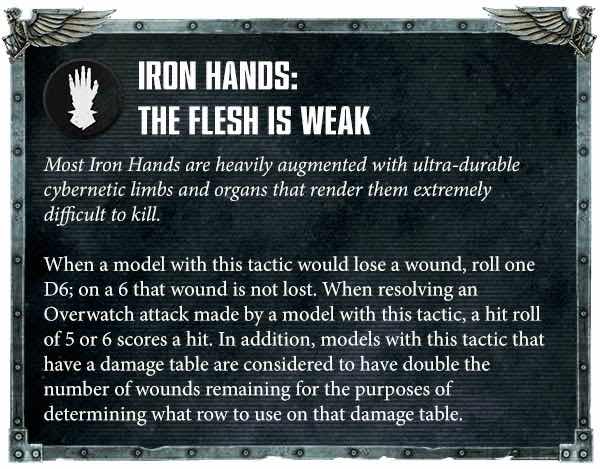 Something we’re familiar with from the previous codex however, there are some changes!
The 6+ invulnerable save now applies to the whole force, including vehicles so it effectively the grants the whole army extra wounds. Pretty good.
The second ability now gives them the chance to hit when overwatching on 5s or 6s! Again pretty huge and it gives them the same ability that the tau can use to such a devastating effect. Particularly against my poor orks.
The third allows Iron Hands vehicles to double their remaining wound count when it comes to choosing which damage profile to use!
This means those dreadnoughts and tanks stay at their most potent until they are pretty much destroyed.

This again really benefits those vehicles and models with heavy weapons. While the doctrine is in play you do not take penalties for moving with a heavy weapon and you also get to re roll 1s to hit!

Great for being able to move out of cover and fire without taking any kind of penalties.

There’s also the added advantage of not needing a  unit to be kept close to a captain to receive those re rolling 1s anymore, meaning lieutenants will be more useful for re rolling 1s to wound!

Now this chap has a beautiful model and I’m sure every Iron Hands player will be including him in their lists. 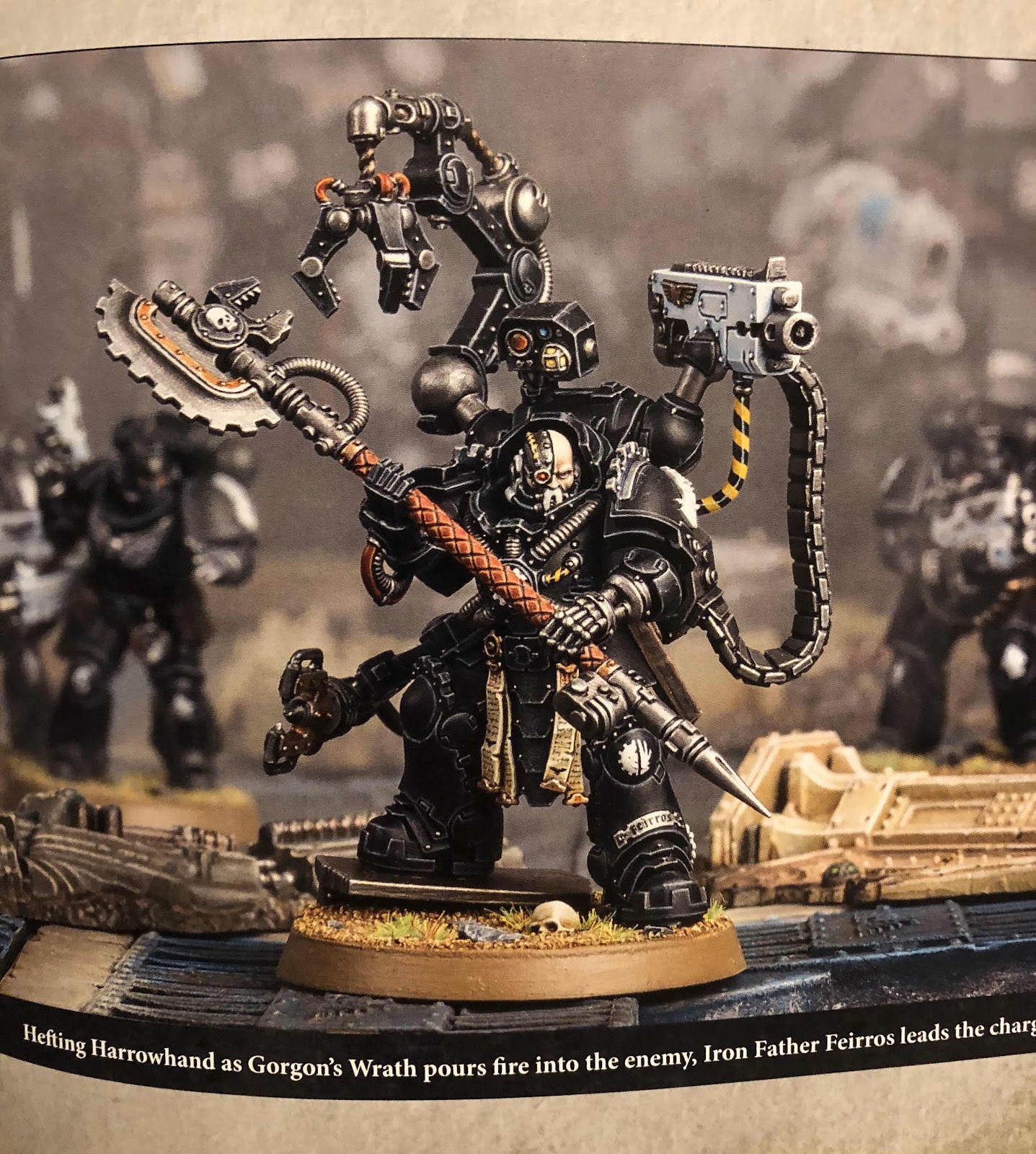 He’s a powerful more reliable tech marine that also buffs a unit to BS 2+ and also provides a 5+ invulnerable save to units within 6 inches. What a great guy.

I’d like him to be advancing with a couple of dreadnoughts, repairing a flat 3 wounds and providing even more fire support with his master crafted heavy bolter.

Most importantly for all that goodness he’s only 110 points!

So we’ll take a look at what I think will be the best units in the range for the Iron Hands... pretty much just dreadnoughts for days.

An incredibly tough unit to begin with, a toughness of 8, a 2+ save and a 4+ invulnerable save is great but adding those Iron Hamds abilities on and you’ve got an almost indestructible beast.

Another pick that probably isn’t the best dreadnought but it’s something I think I’ll be including as I want to try to stick to the newer models I like so I don’t get stung by GW like with the removal of the Dispossessed Quarrellers and Warriors. It’s still too soon. 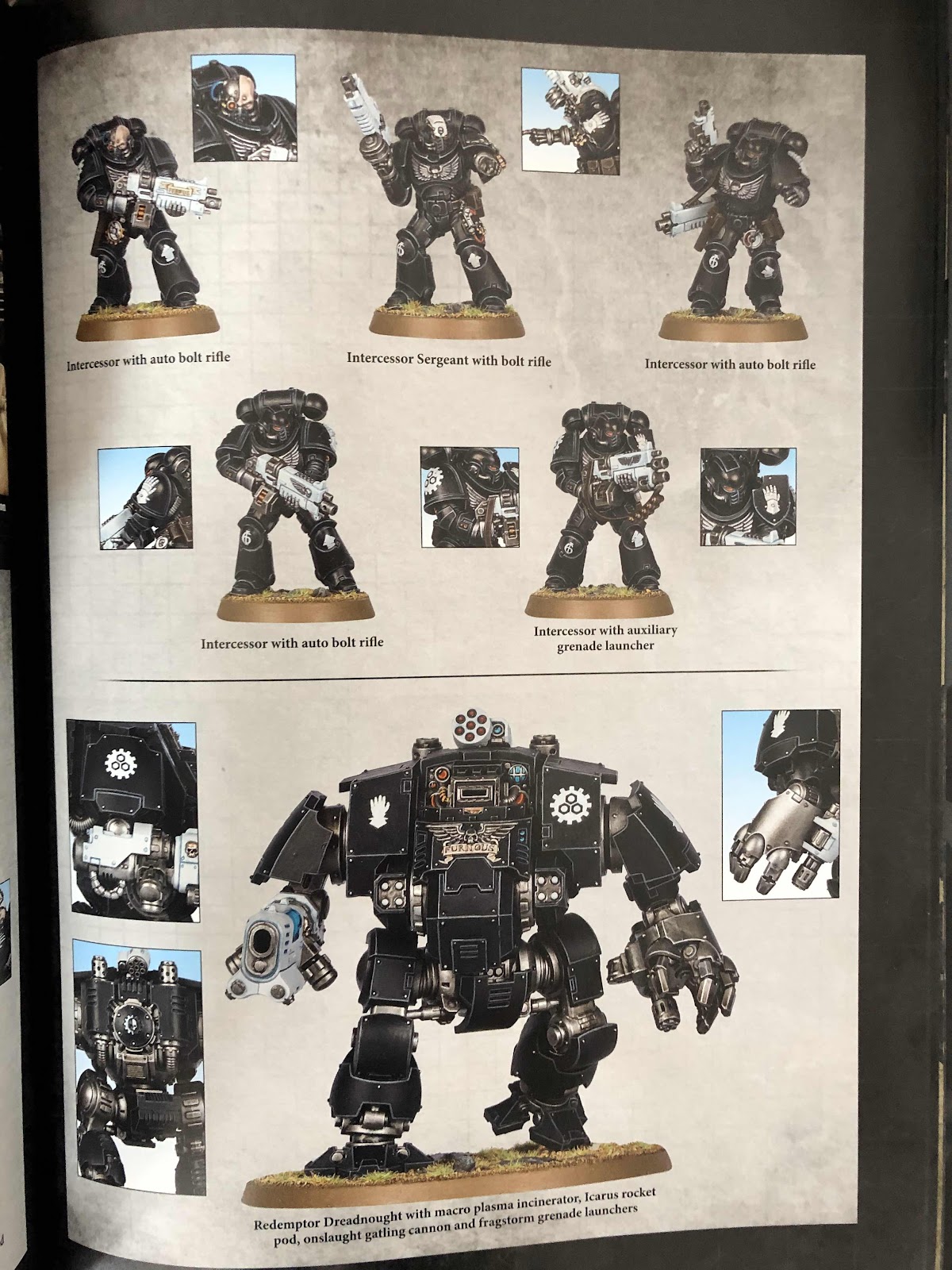 The Redemptor however, again benefits massively from the devastator doctrine and having the iron father close by will make those 13 wounds difficult to chew through!

Another unit I’d like to include in my army, with a point drop and the iron hands devastator doctrine in play, it can now stay at super sonic mode and still hit at its regular ballistic skill for firing heavy weapons.

This is probably my favourite of the newer tank designs that for me have been a bit hit and miss.

It’s a the turret really, it just reminds me of the British crusader tank in World War 2, not a great tank in practice but it looked cool. The repulsor weaponry is probably just a tad more powerful than the two pounder on the crusader! 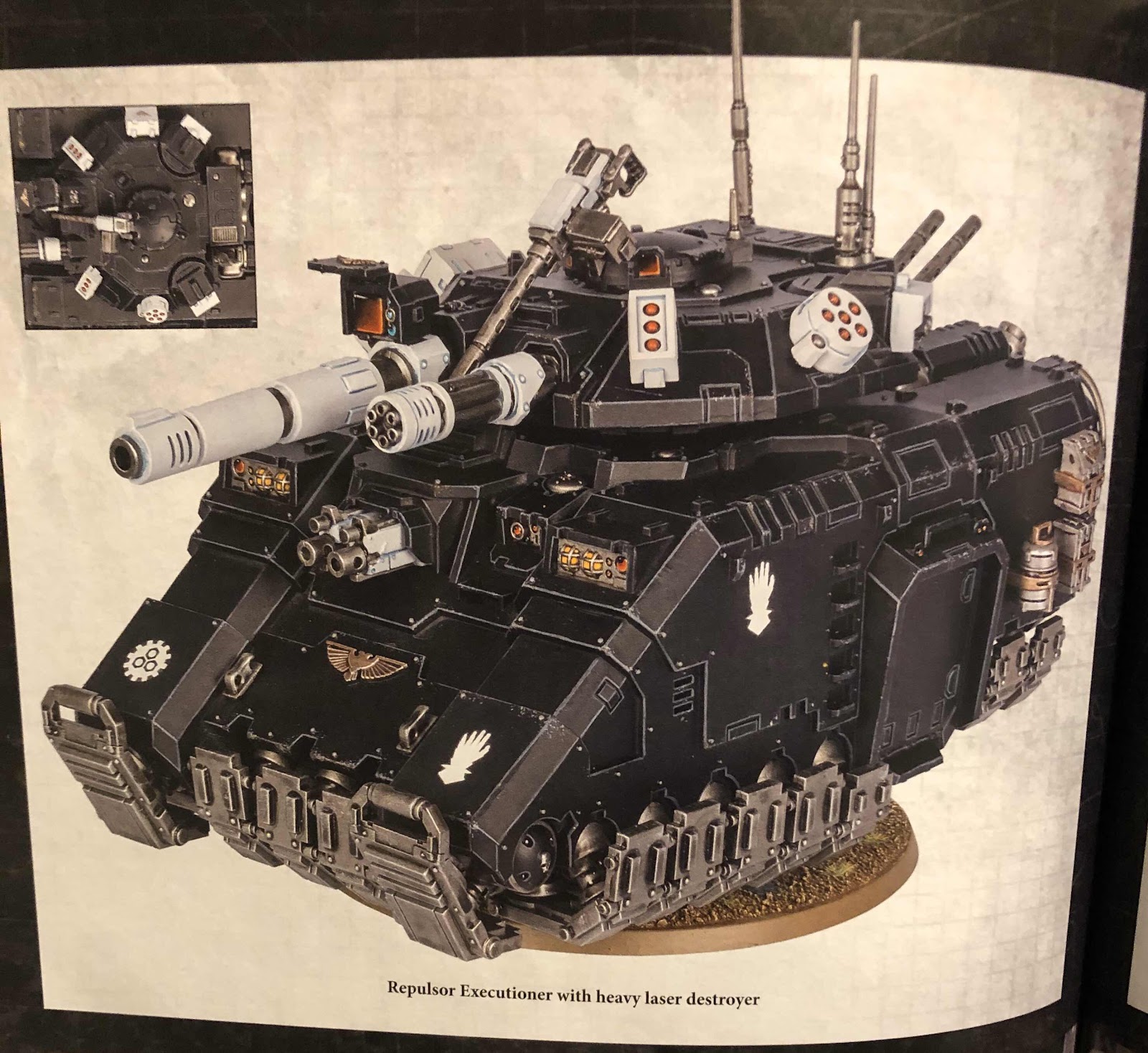 With the iron father knocking around this tank becomes another beast. The 5+ invulnerable save he provides and the chapter tactics mentioned above make it pretty powerful. Survivable and powerful, it’s got to be in my army.

One of the coolest things here combined with a stratagem is the ability to make a dreadnought into a character! So some of these warlord traits could be pretty cool on a dreadnought. Also great from a narrative point of view as well.

With this one you have the ability to deny 1 physic power per turn.

Really good when the iron hands don’t have a huge defence against mortal wounds from psychic powers.

All Flesh is Weak

Here’s your dreadnought characters warlord trait... a 5+ invulnerable save and no need to be near Feirros.

When a warlord uses this trait it may consolidate 6 inches in any direction.

Another interesting trait to use on a dreadnought as it means you have good chance of keeping them out of combat and not losing a turn of shooting. 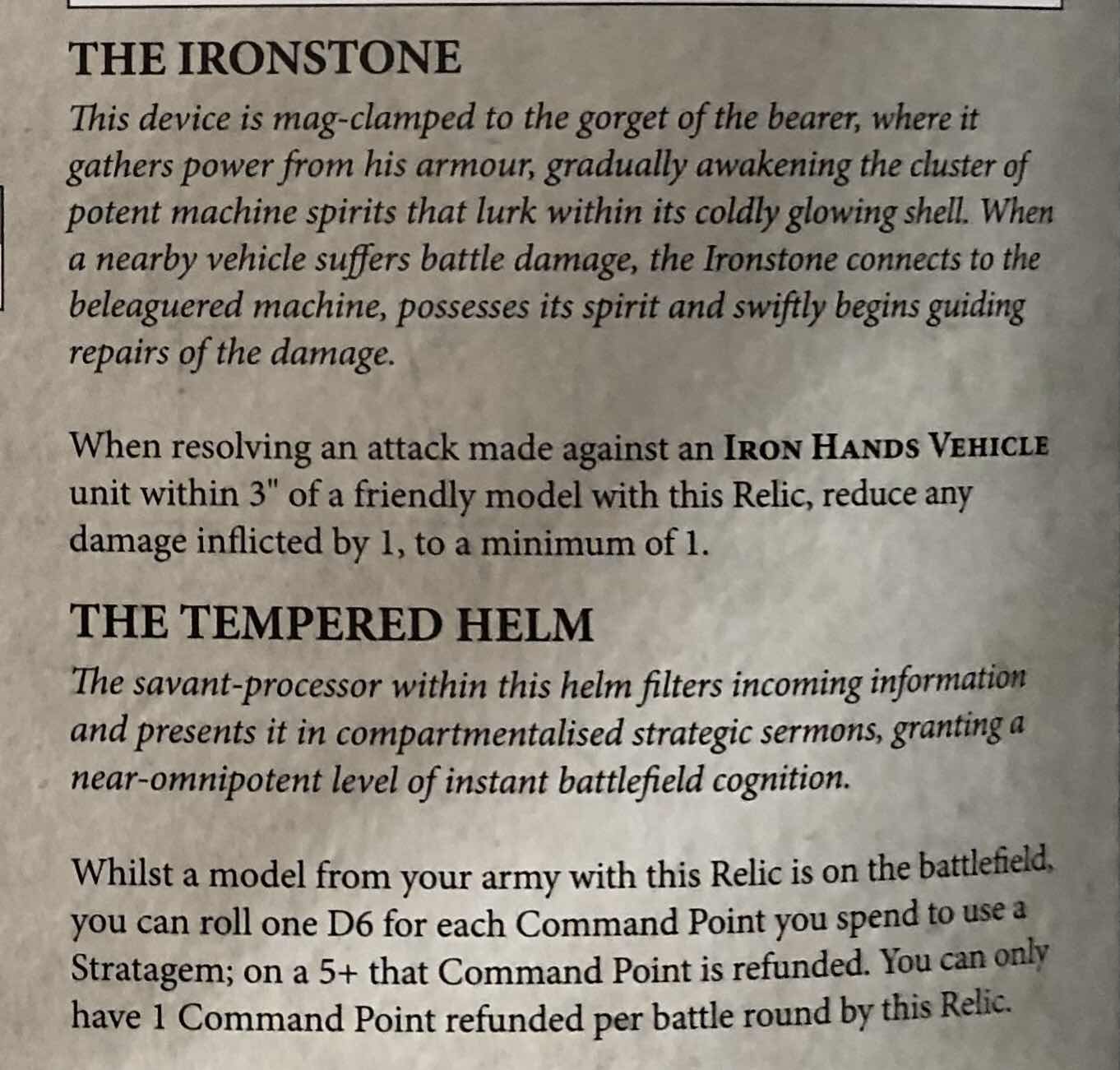 Reducing all damage to a minimum of one is pretty crazy, putting this on dreadnought or a repulsor will make them incredibly durable especially if Feirros is healing too.

The tempered helm isn’t bad at all but it’s got to be Iron Stone for anyone playing this faction. 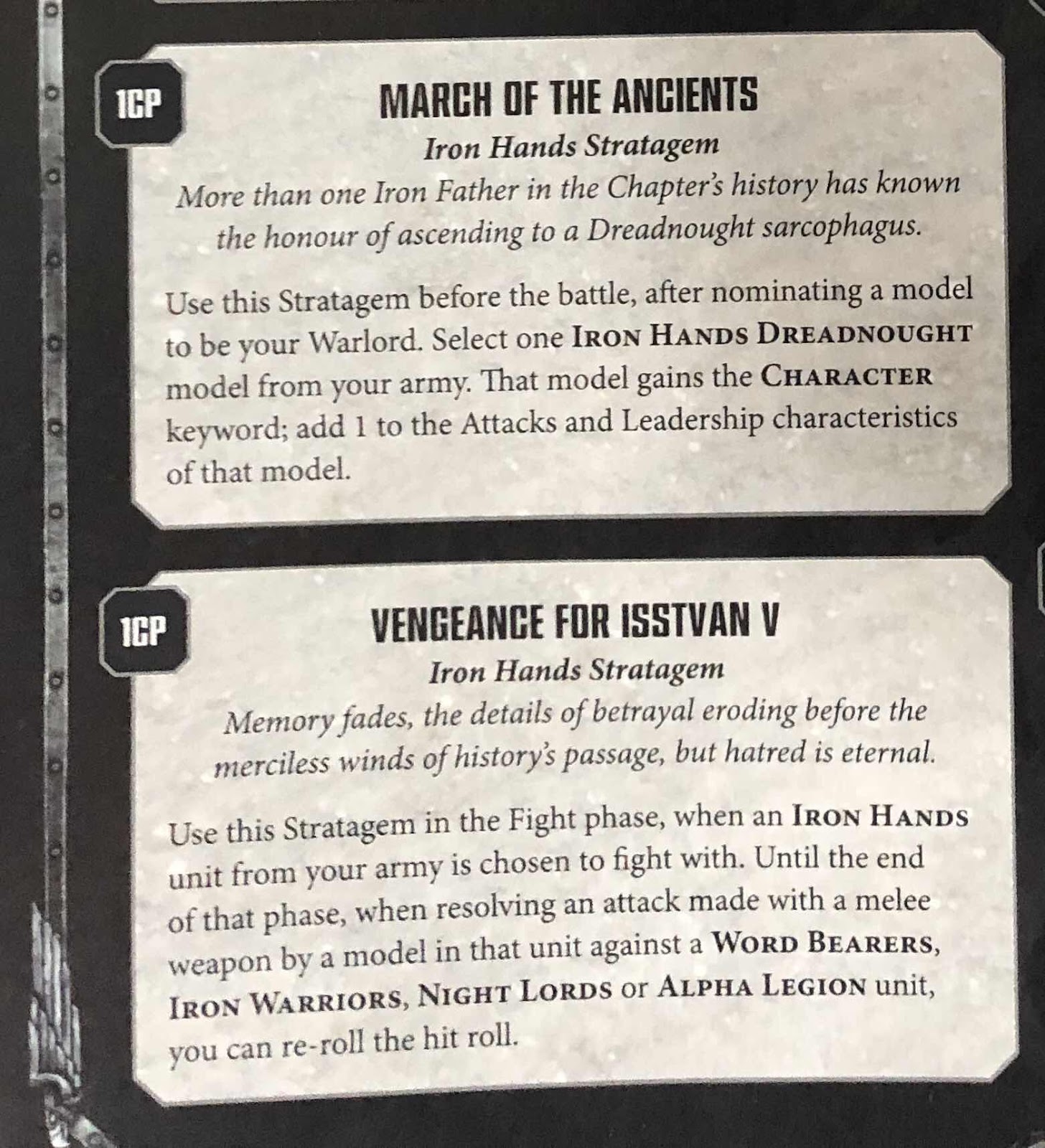 Very thematic and yes vengeance for Isstvan is always needed.

Another very good one, this allows an ironhands techmarine to heal again and repair a model that has already been repaired that turn. Repairing six wounds with Feirros is pretty great.

A great addition to this book in my opinion. I will definitely be including a librarian in my army. 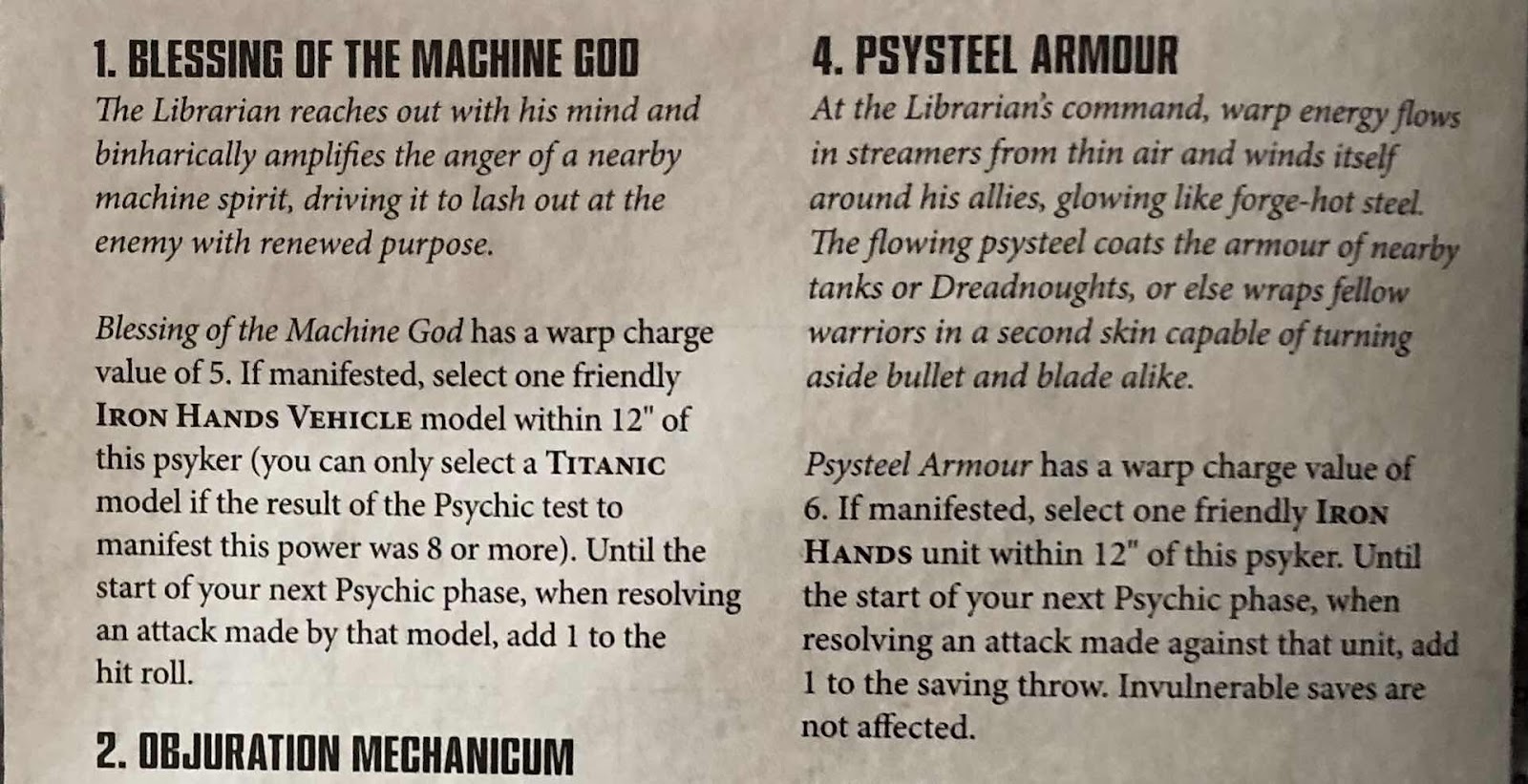 Probably the best two psychic powers in the discipline for me.

Getting a plus one to hit on a vehicle is great with a low a casting value of 5 is pretty reliable. The only downside is that you have to be within 12 inches. So those advancing dreadnoughts might not be in range.

Also adding +1 to your save is pretty great and another way to keep those dreadnoughts fighting until the game end because let’s face it they’re just not going to die!

I am very excited about this book both narratively and competitively. I really didn’t expect to get this much love from GW so it is very welcome.

Vehicles in this army will now be the cornerstone or I mean Ironstone of any list. They’ll just keep firing all game and I’m sure it’ll be devastating...

If you’re an existing Iron Hands player the book is pretty amazing. No real advancements lore wise but you don’t normally see that in a codex and for £20 it’s a great book if you want to play the army, with a tonne of rules and options to use for a long time.