We have been fortunate enough to have been sent a copy of the new Genestealer Cult Codex, and I just wanted to share a quick review of its contents. 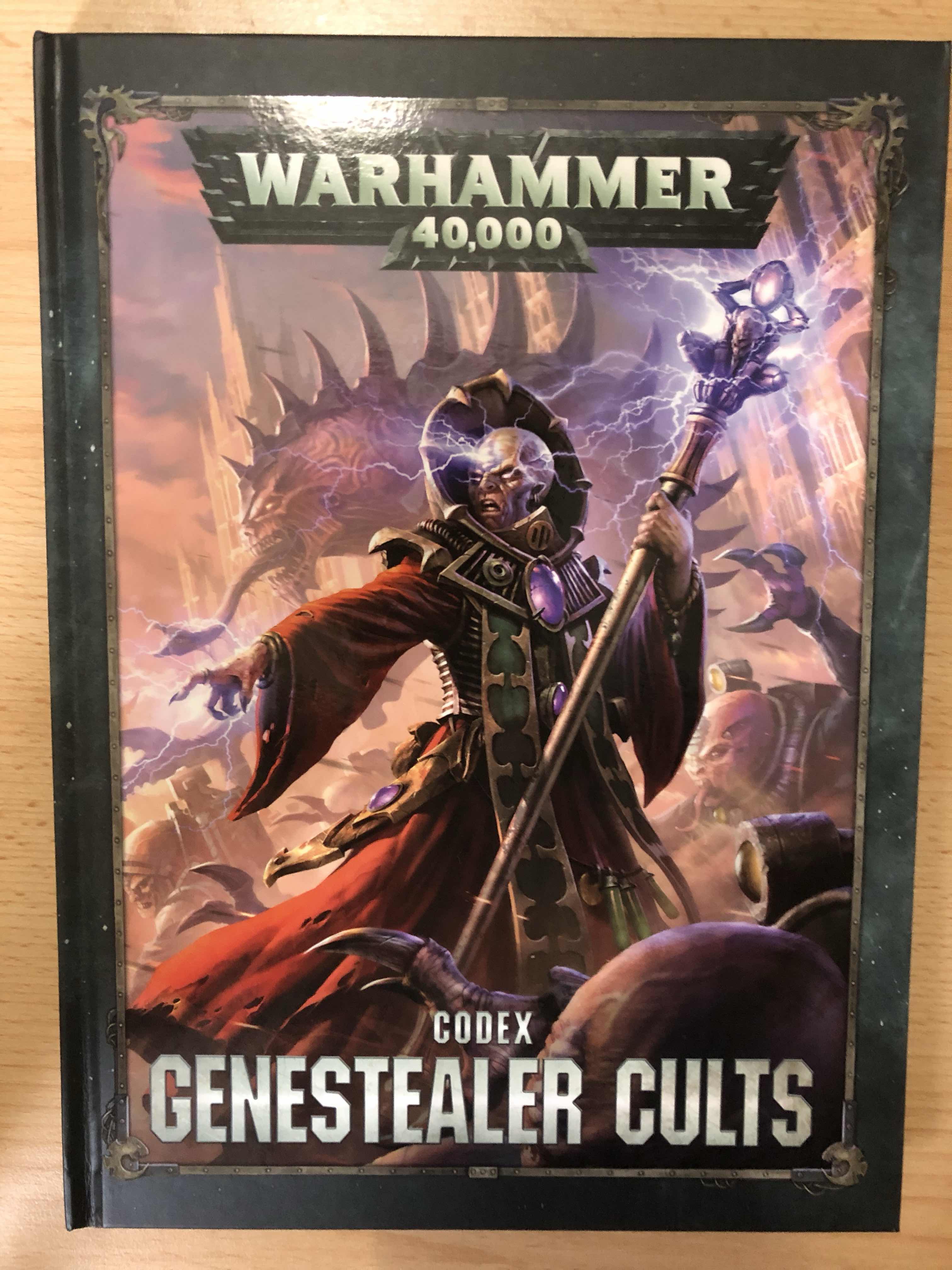 The first thing you need to know, is the origin of a Genestealer Cult. Broods of Genestealers secretly make there way to a planet they wish to infect. This could be as a stowaway on a spaceship. Once there, their aim is to infect a victim with some of their genetic makeup. This is done via an ovipositor (ribbed tube) under the victims skin. This is also known as the Genestealer’s Kiss. This dramatically changes the victim, physically and mentally, forcing them to worship the Genestealer like a god. The Genestealer will then continue to infect the population. The infected will start to produce offspring  which are a combination of the aliens DNA  and that of the indigenous species. There are certain tell tail signs like a slight purple tint to their skin, or the obvious extra limb.  These hybrids would become the Acolytes, also known as the first generation. These will use their hypnotic abilities to entice other victims to join the cult, resulting in a second generation of cultists. This process continues moving into the 3rd and 4th generation, each showing fewer and fewer mutations. These are known as Neophytes and are able to pass off as members of the indigenous species, which in turn helps them infiltrate the society even further.

The offspring of the 4th generation, are Purestrain Genestealers, and thus the cycle begins anew. 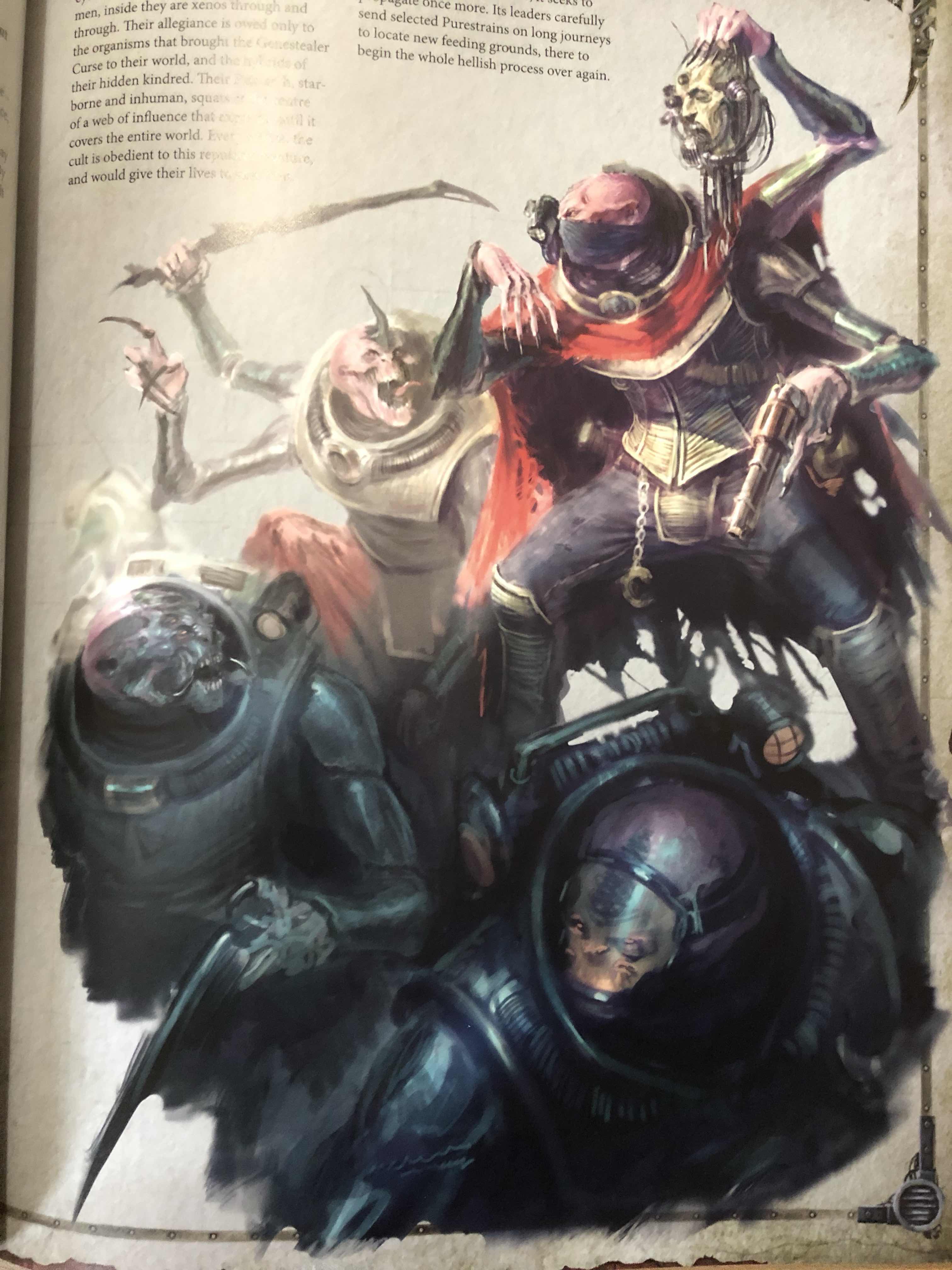 Occasionally, abnormalities can happen at any stage resulting in mutations such as hulking Aberrants and Hybrid Metamorphs.

The main goal of the Genestealer Cult, is to infiltrate the hierarchy of the planet and to cause as much unrest as possible. Once the time is right, the cult will rise up and attempt to take full control of the planet. This normally happens when the hive fleet of Tyranids are near. There are occasion where a Patriarch will cause the uprising early however. This could be because their presence have been revealed prematurely, or it could even be that the Patriarch senses psychically that the hive fleet that would have claimed them is now lost. 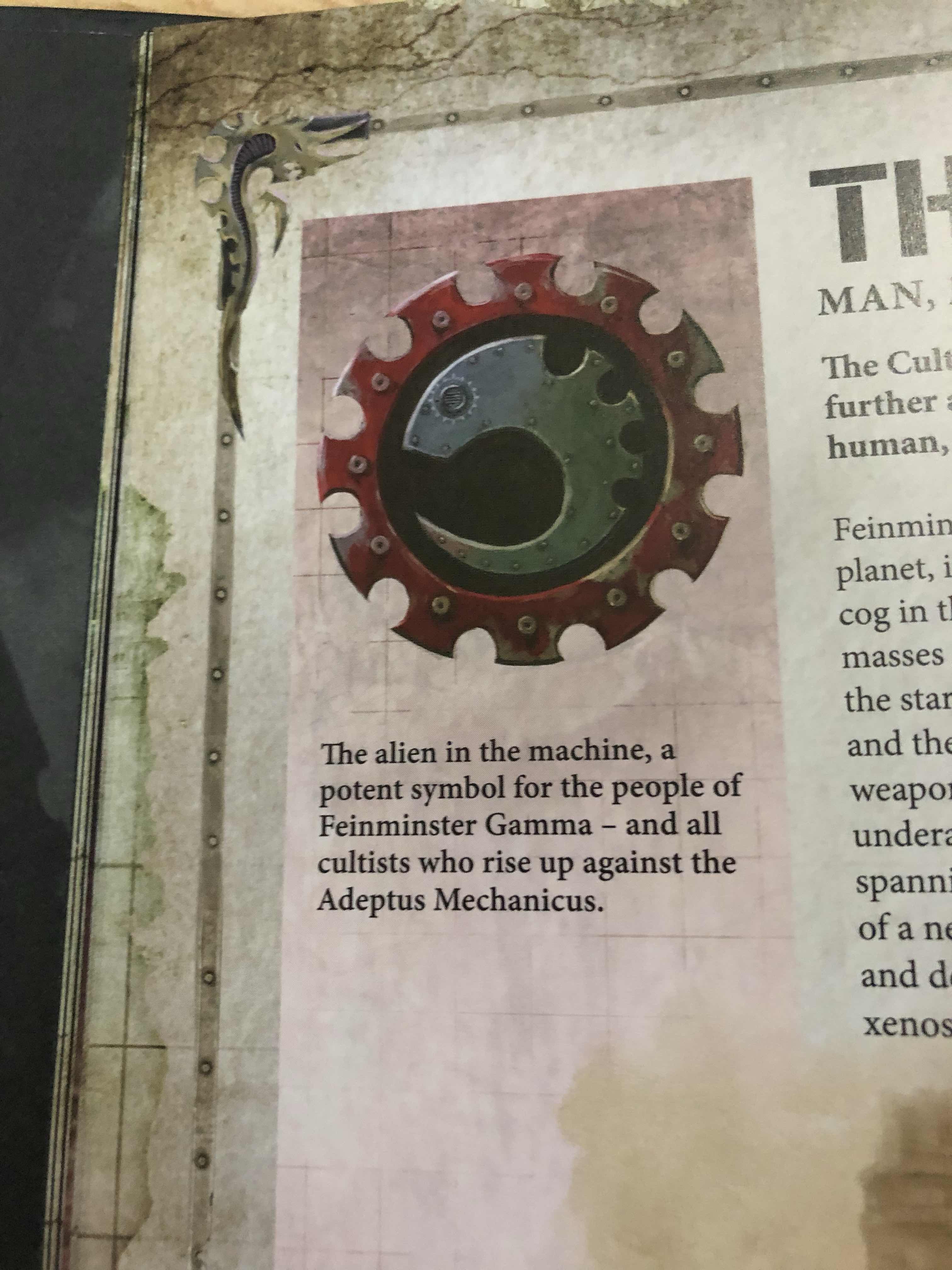 The codex then goes on to talk about some of the more well known cults. One that really stood out for me is The Bladed Cog. These originated on a planet called Felnminster Gamma, where Tech-Priest Dominus Ovid Thrensiom traveled to refuel the Mechanicus Knights That accompanied them. 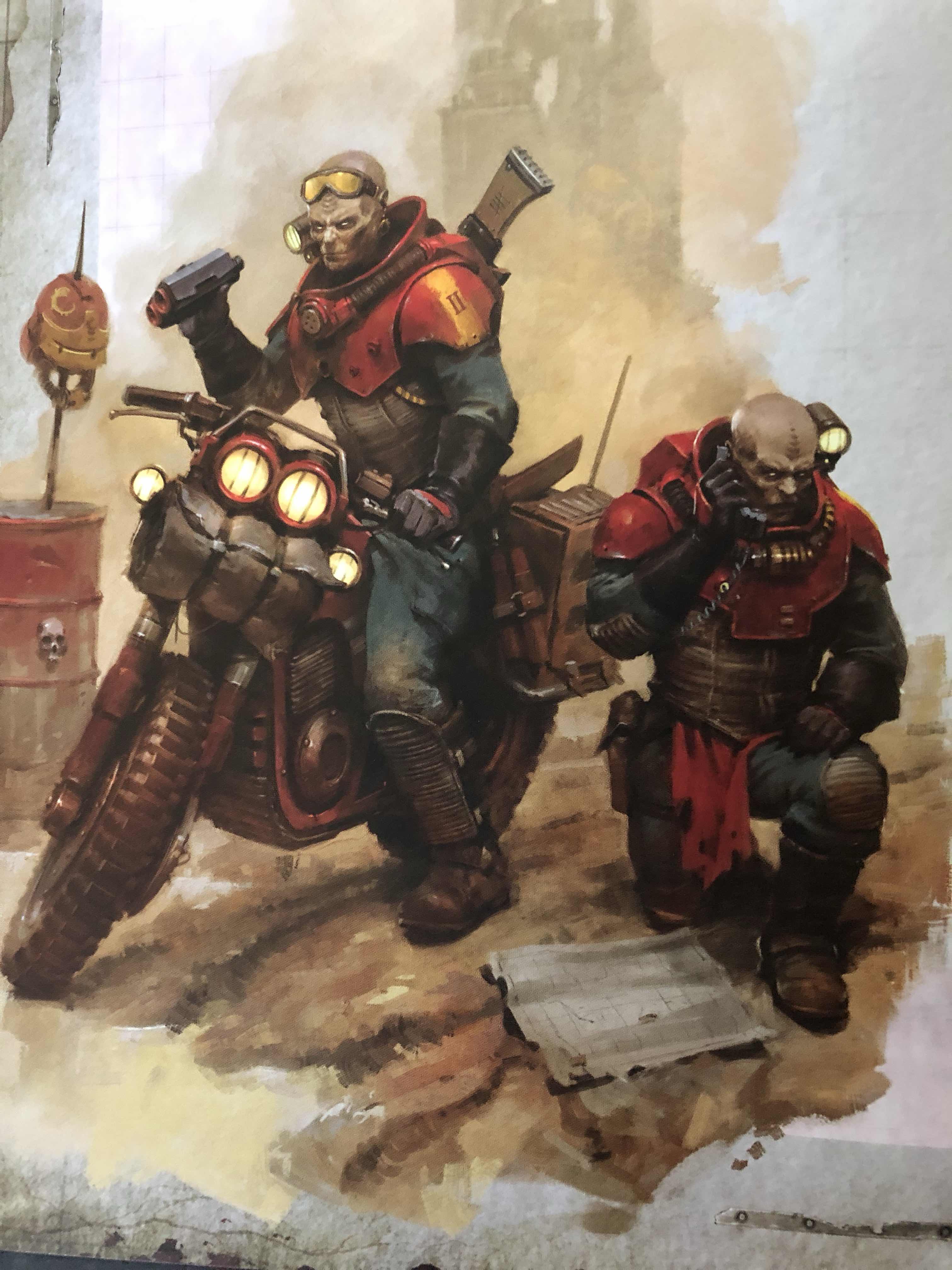 When they arrived, they discovered that the planet was barely able to keep their cities lit around the clock. Looking for other means to gain energy, they started to harvest the bio-electricity from the living population instead. Any that opposed, were killed. Little did they know, the population included a Genestealer Cult.

The Cult gained more and more followers, each wanting to overthrow the rule of the Tech-Priest. The common populous were not the only ones to fall under the spell of the Cult. Though it took the mental onslaught of the Patriarch itself to achieve it, many Skitarii were brought into the embrace of the cult, including the Skitarii Alpha. This led to the eventual uprising of the cult, and the downfall of the Tech-Priest, who’s remains are still strung to the cults prime war banner to this day. 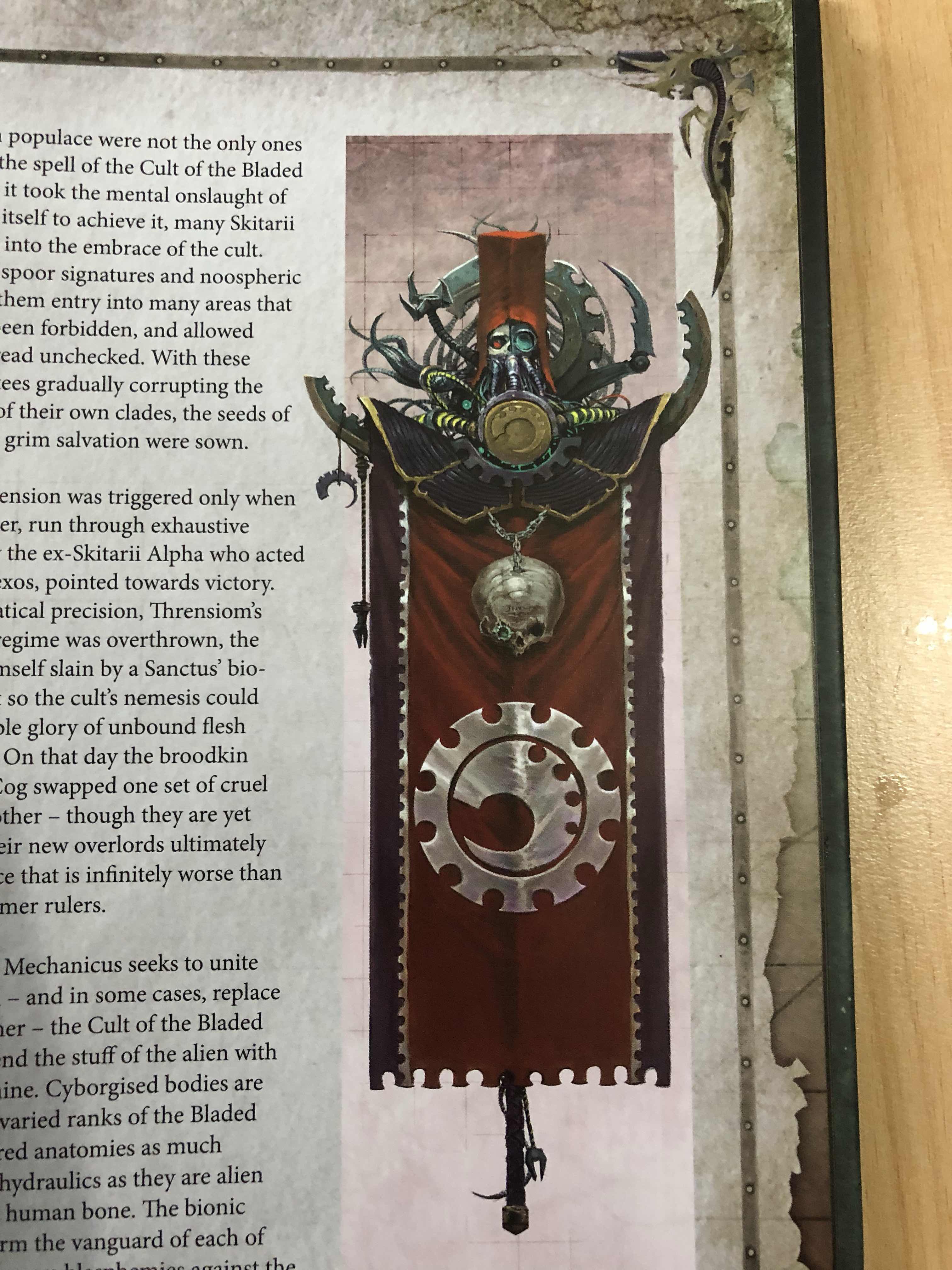 The Cult now strive to find the perfect unification of alien flesh and machine. They even depict their deity, the Clawed Omnissiah, as having robotic pincers alongside the primary talon-limbs that would be familiar to any Ordo Xenos Inquisitor or Deathwatch veteran.

I really love the concept of this cult as it could bring about numerous conversion opportunities. Something I may have to look into in the near future.

As always, the Codex is filled with amazing artwork and some very nicely painted models, giving lots of ideas when planning your own. I especially like the colour scheme for this Atalan Jackal. Although if I were to do it I would dull the colours down slightly with a wash. 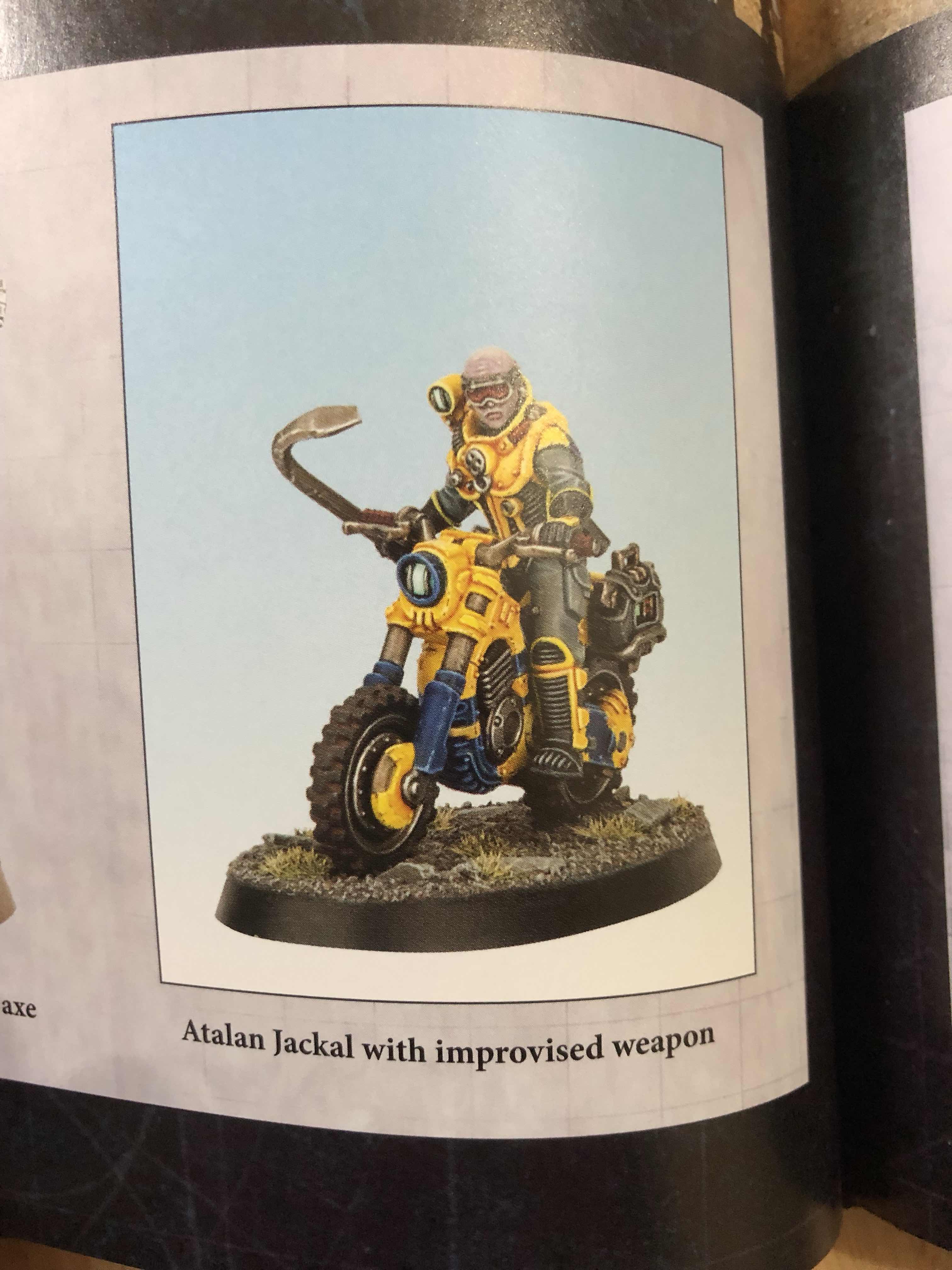 Now I’m going to have a look at some of the rules available to all Genestealer Cult players. 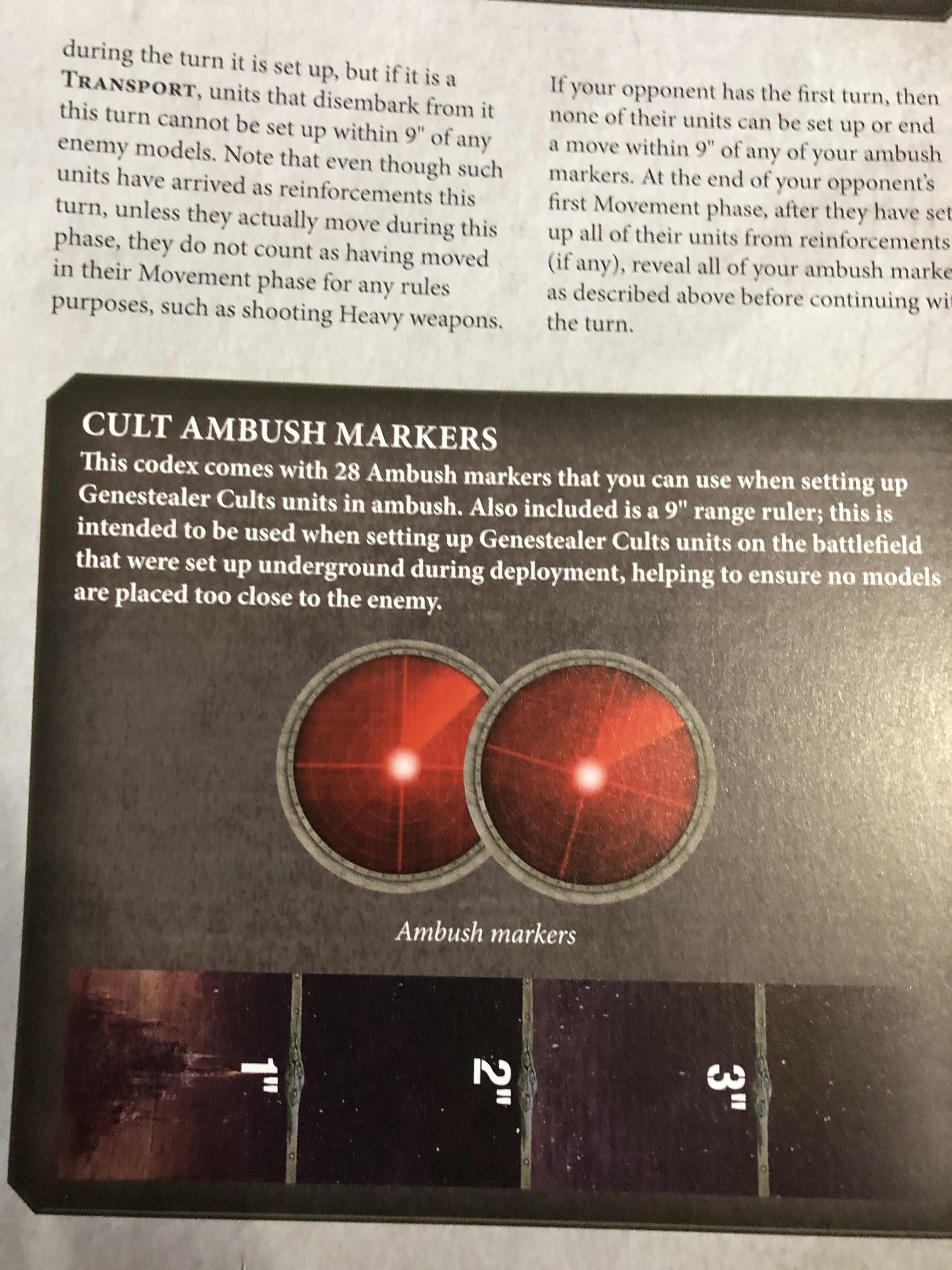 The other way that this rule can be used, is setting units up in Ambush. For this, you deploy a new ambush token instead of a unit in your deployment zone. If the Genestealer Cult player has the first turn, they must reveal which unit represents which token, this does not need to be decided beforehand. There are numerous stratagems that can be used to make this even more effective, like Scanner Decoys. This allows you to set up 4 tokens instead of 1 for a unit, then when the time comes to reveal them, 3 are discarded. This could be very helpful in forcing your opponent to divert their forces where they will not be needed.

The next rule that jumps out to me is called Unquestioning Loyalty, which is basically a 4+ look out sir which can be taken on a character that is within 3 inches of a friendly unit. If the roll  is successful, a model from that unit is slain instead of the character taking the wound.  This gives some of those characters a little more survivability. 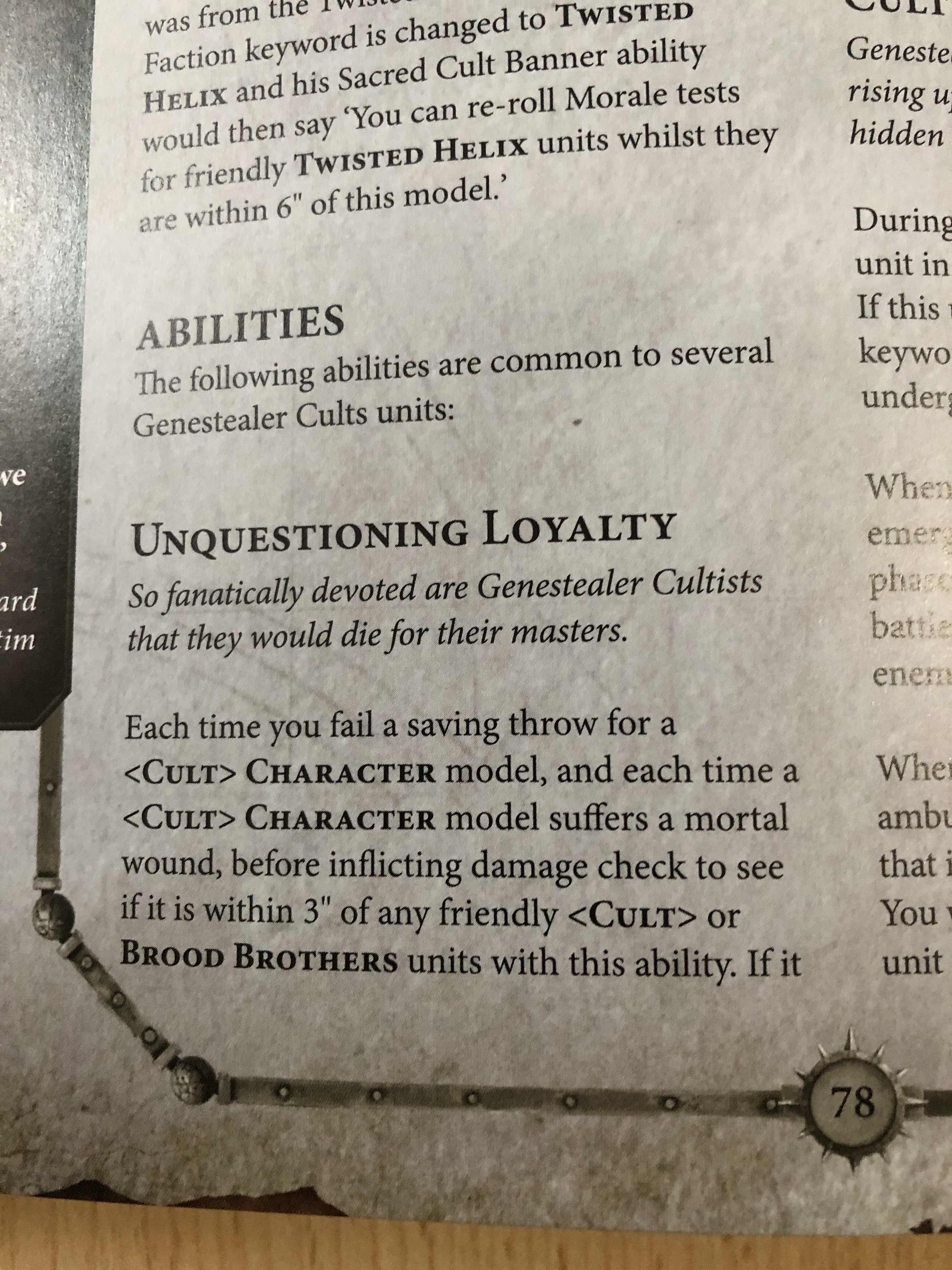 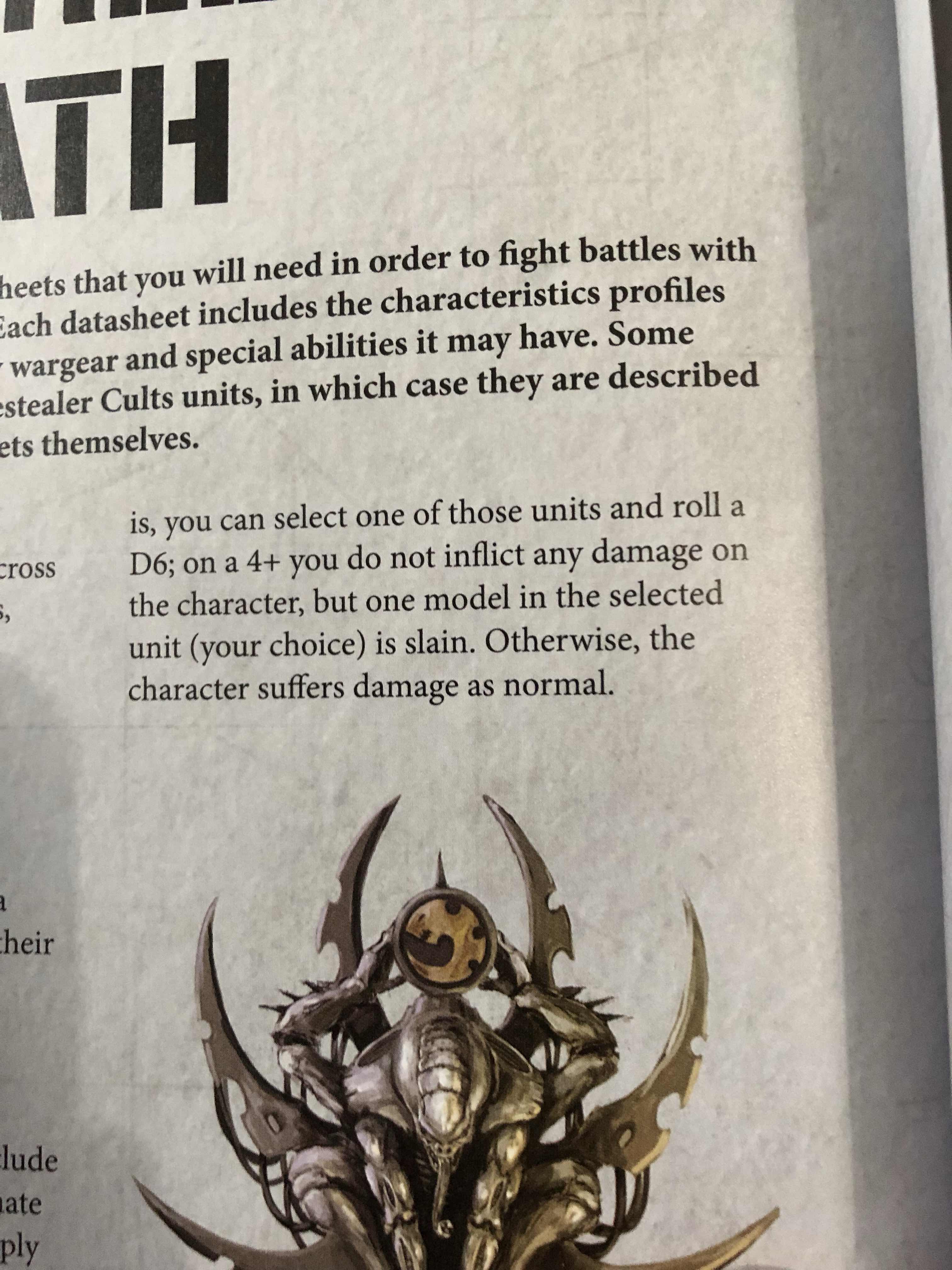 Onto the actual units themselves, I really love the Jackal Alphus. Not only is the model stunning, but the rules are pretty good as well. He is equipped it with a Jackal Sniper Rifle, with 36” range, Heavy 1, S4, AP-2, D D3. With a BS of 2+, and the ability to target an enemy character even if it’s not the closest unit, it makes this guy pretty good at causing some ranged damage to your opponents leaders. You also subtract 1 from hit rolls for attacks that target this unit is the shooting phase, making this guy just that little bit harder to hit. 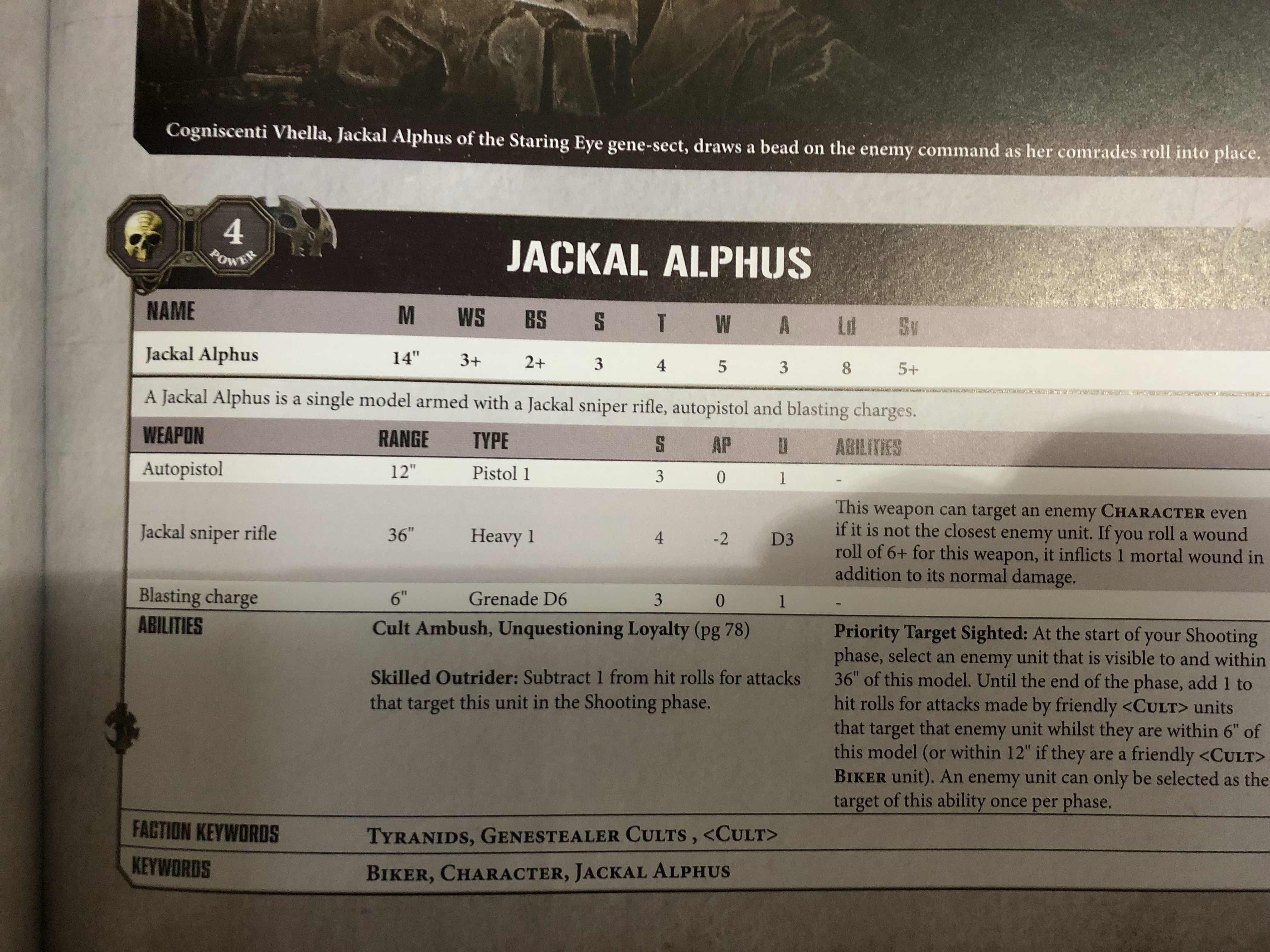 I feel the Achilles Ridgerunners also fill a gap in the Genestealers Cult army list. It has some great options, which is making me consider getting at least three of these, like the Heavy Mortar. A whopping 48” range, Heavy D6, S4, AP-1 D1 and the fact that this weapon can target a unit that is not visible, it should be good at taking out the more valuable units that your opponent is trying to hide. Not only that, but you could combine it with a Spotter, which increases the range to 54” or with a Survey Augur which negates the targeted units cover. 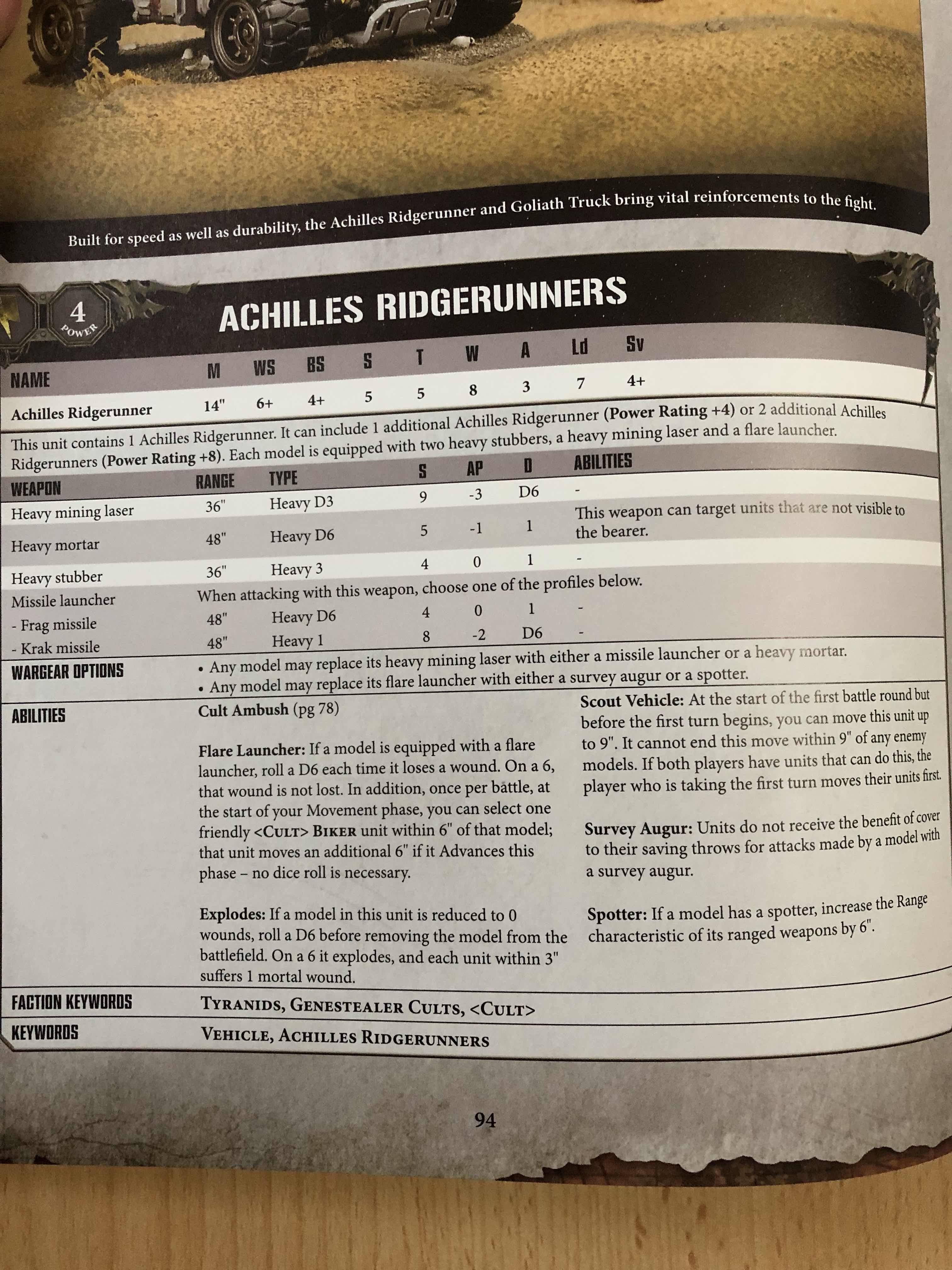 It is worth mentioning the psychic abilities that will be available for the Patriarch and Magus. Each know the Smite power, and 2 psychic powers from the Broodmind discipline, of which there are 6 in total. Out of these I quite like Might From Beyond. If successful, you can add 1 to the Strength and Attacks characteristics of a Infantry or Biker unit for a turn. 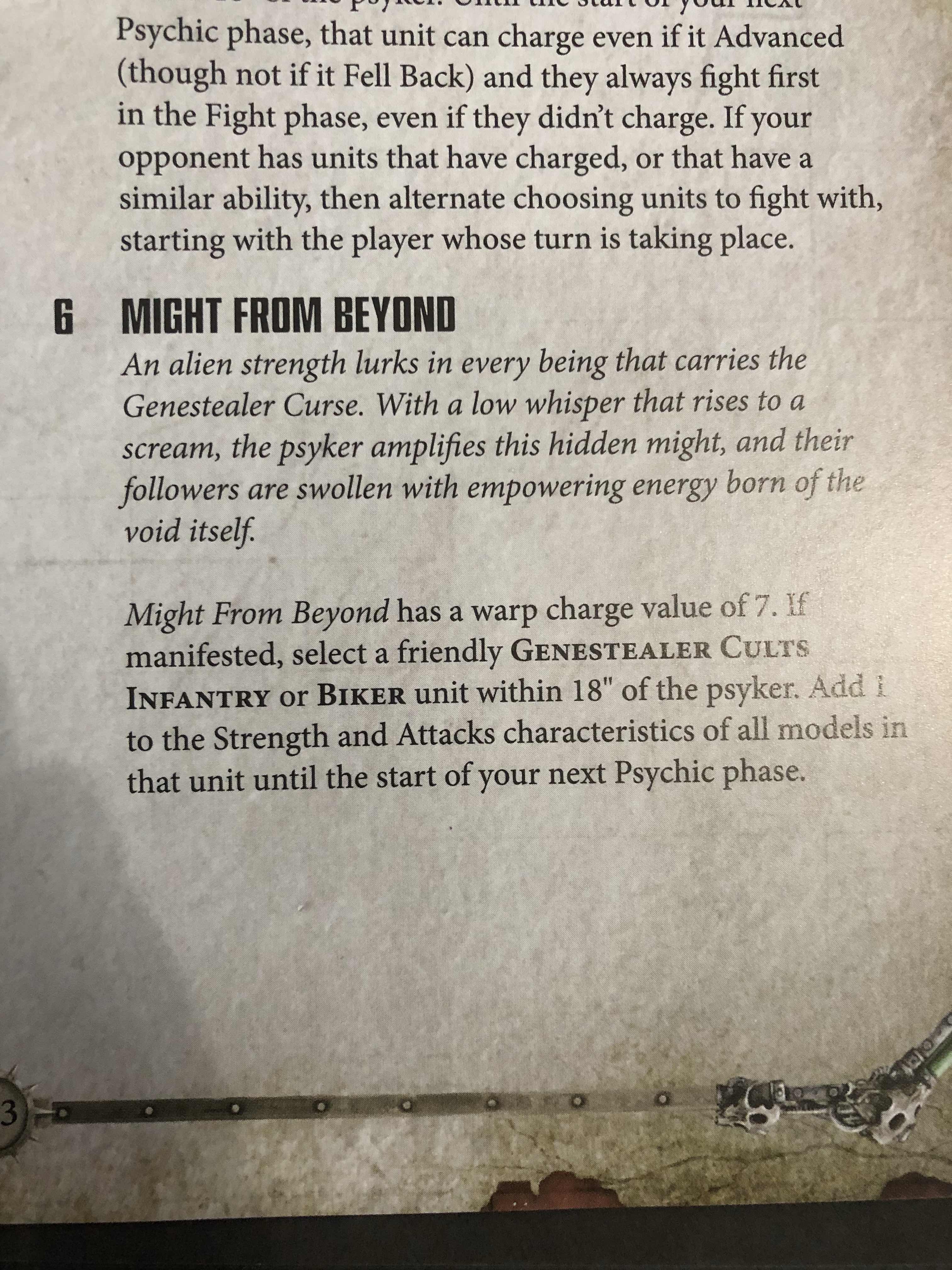 I also like Mind Control. If this is successful you can make one of your opponents models shoot or make a single close combat attack against another 1 of their model. 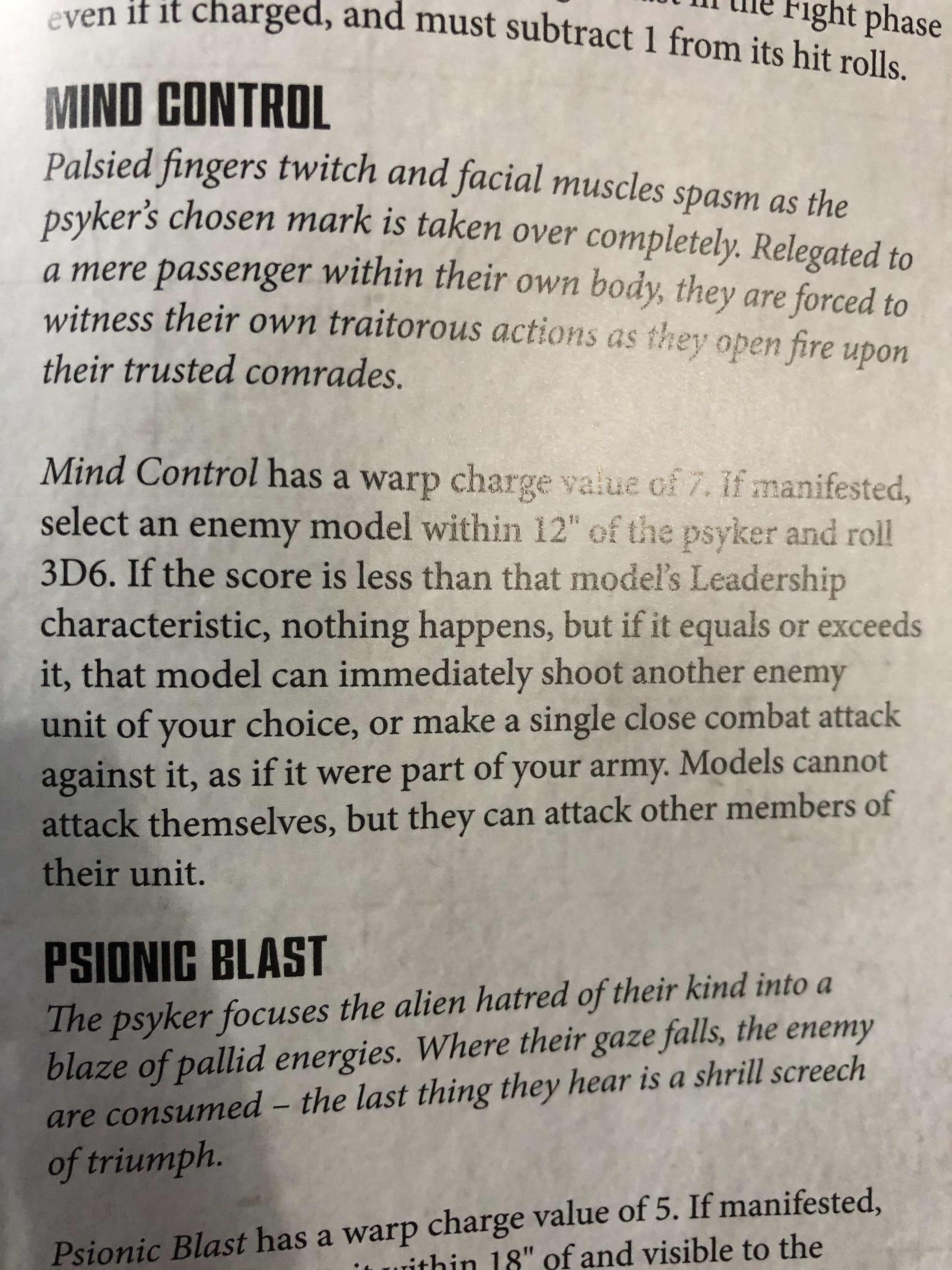 There are of course special rules if you chose to field a certain Cult. Since I previously talked about the Cult of the Bladed Cog, it makes sense that I also let you know of the benefits of fielding this cult. All models receive a 6+ invulnerable save, or a plus 1 to the models existing invulnerable save to a maximum of 3+. Also, models do not suffer the penalty to there hit rolls for moving and shooting Heavy weapons. 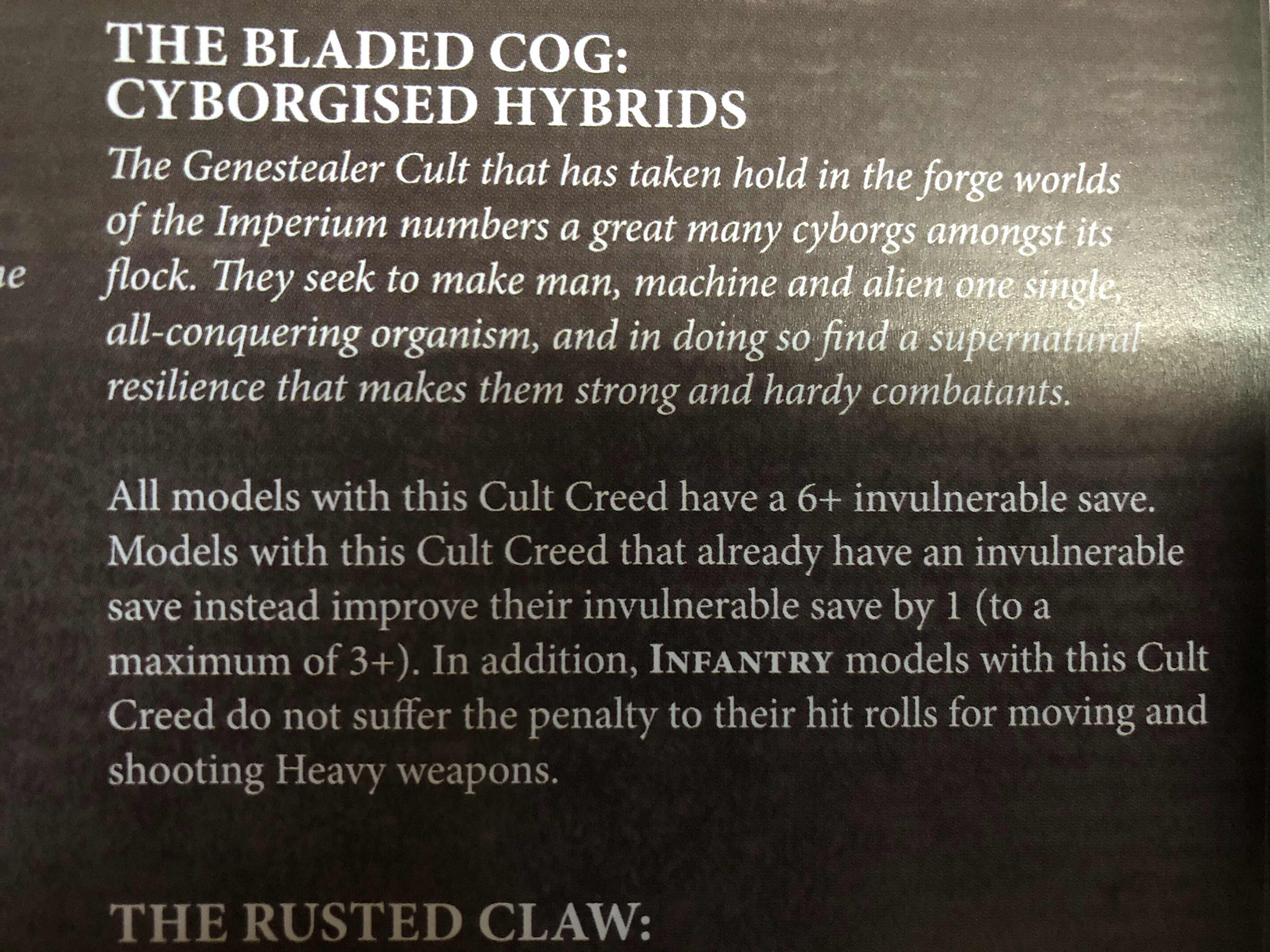 There are 25 stratagems in total to choose from. Other then the one I already mentioned above, there are more that make the Cult Ambush rule even more useful. Take They Came From Below as an example. You can use this when it’s time to reveal ambush markers, instead, you can choose 3 to be deployed underground. 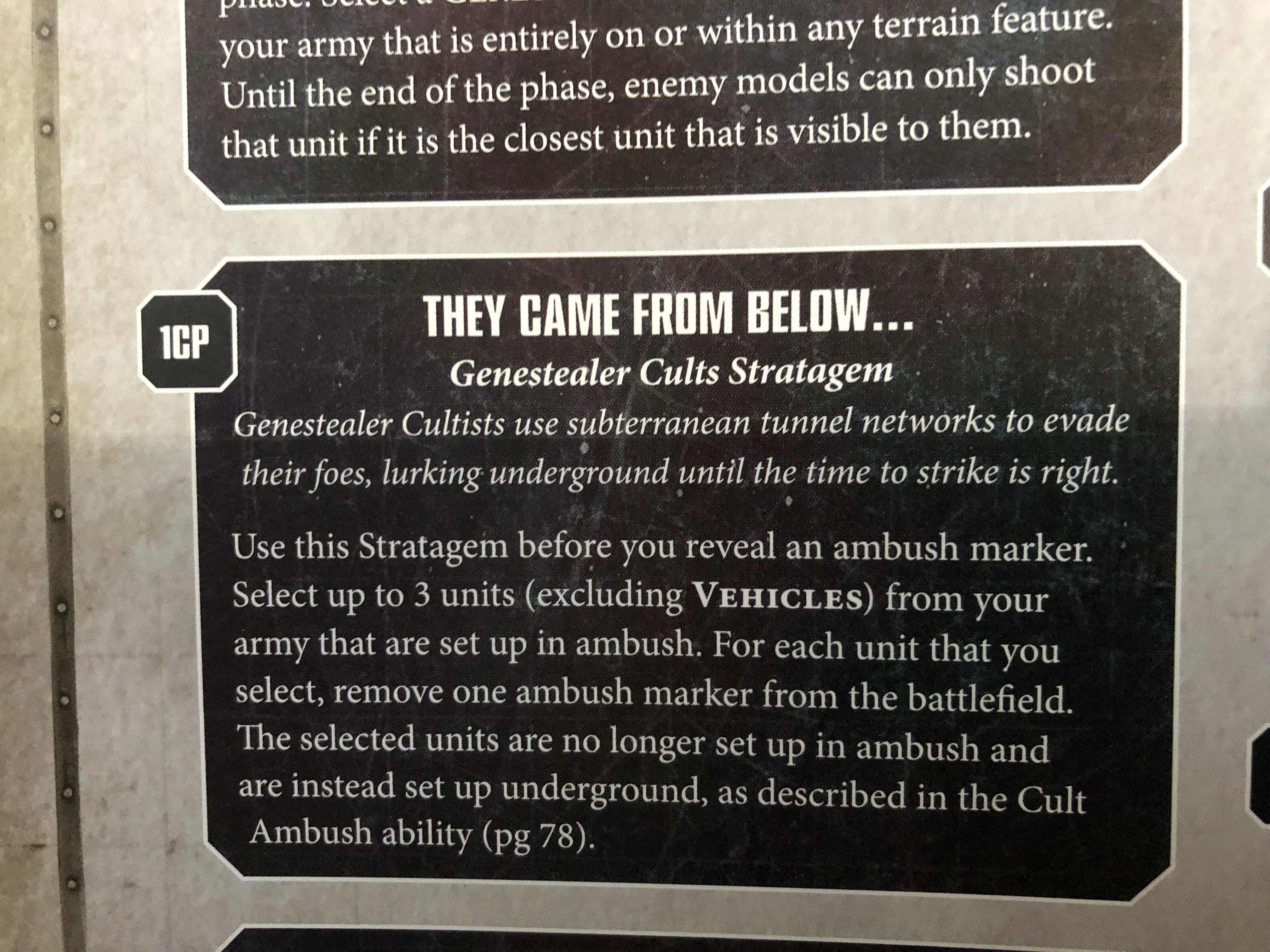 Or you have Return to the Shadows, which basically means you can remove an Infantry or Biker unit from the battlefield, and then redeploy them in the next movement phase anywhere that is more the 9” from an enemy model. Very useful for moving a unit, safely and quickly. 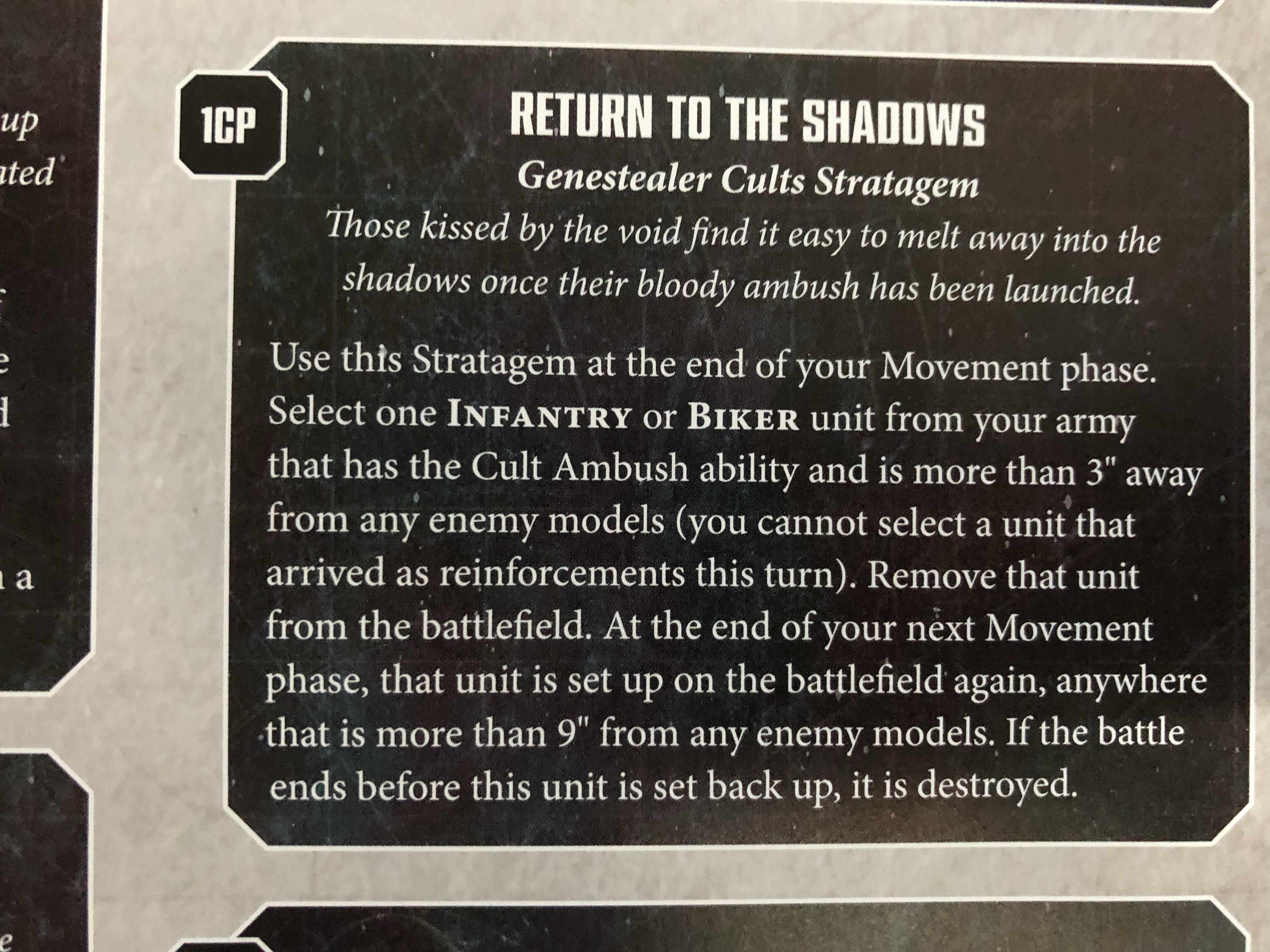 Onto the Warlord Traits, of which I like Shadow Stalker. This subtracts 1 from hit rolls for attacks that targets the warlord. Since they can be quite squishy, this trait could be pretty useful. 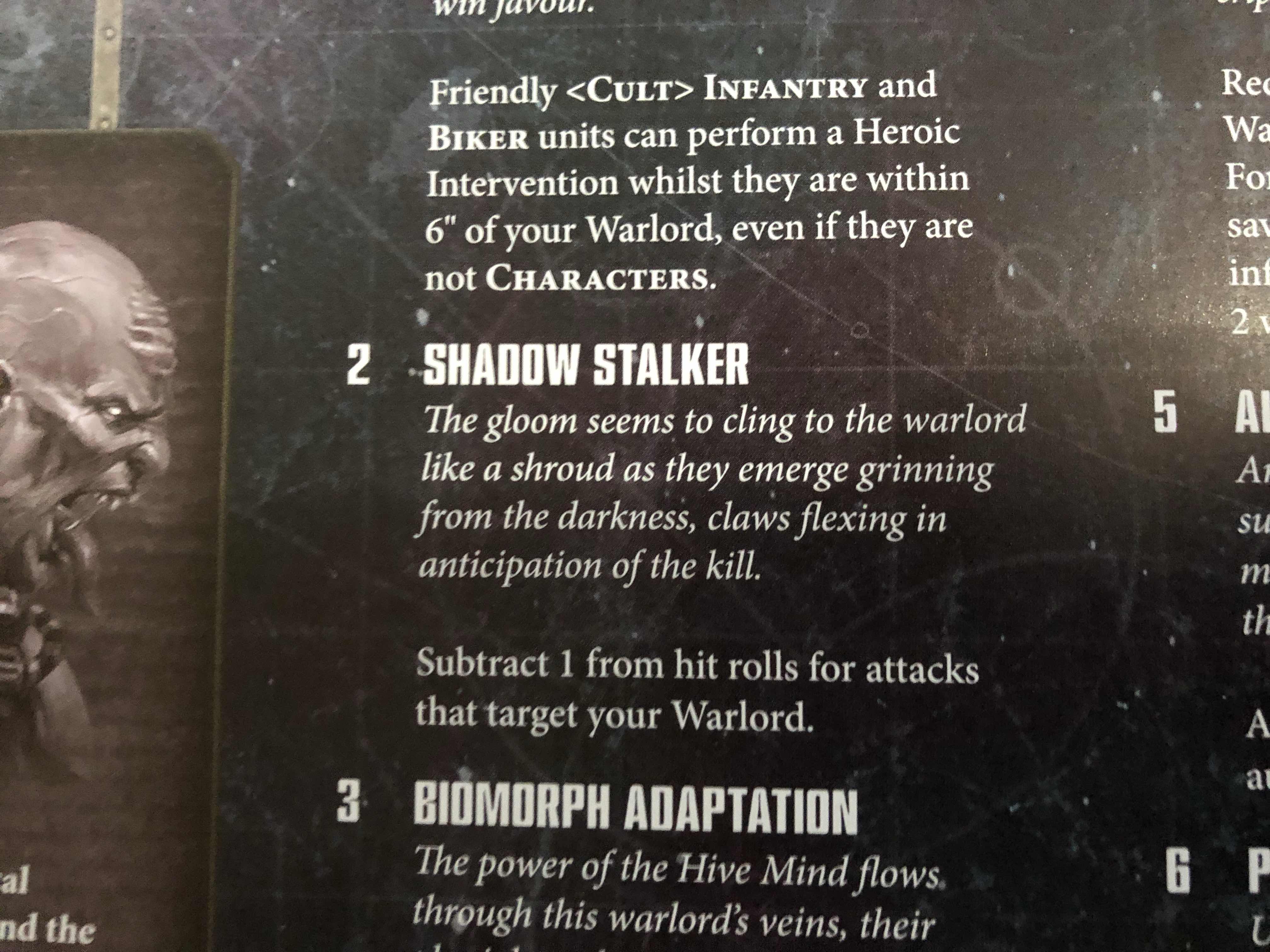 There are also cult specific Warlord Traits, allowing you to further customise your force.

Last but by no means least we have the Sacred Relics of the Cult. I really like the Gift From Beyond. This adds 2 to the wound rolls for attacks made with the Jackal Sniper Rifle. Making it even better at picking off enemy characters. 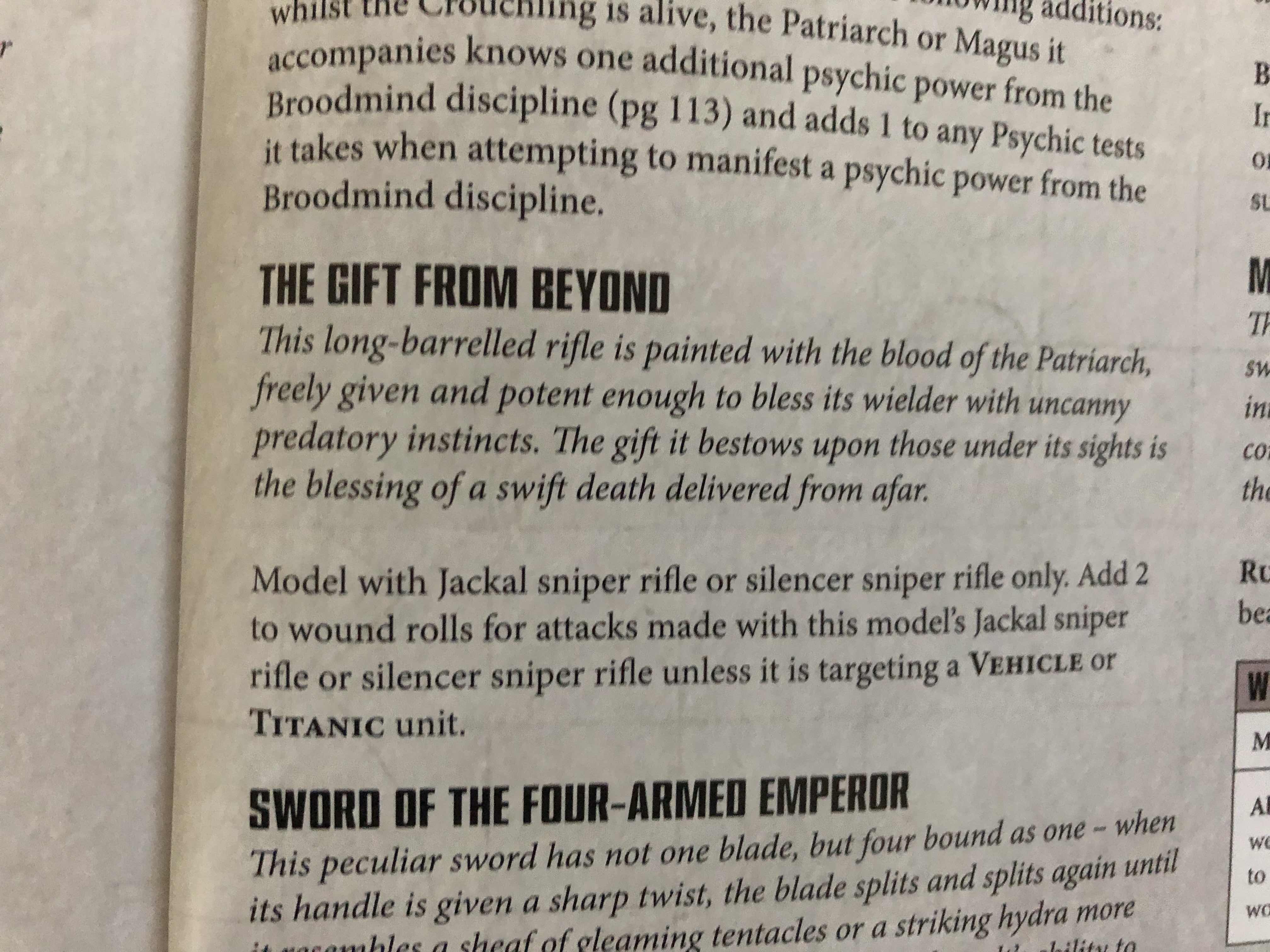 Overall, I really love this Codex. There is tones more lore that I have not mentioned,  and there are now much more options that you can choose from when picking your army. I also feel that this army fits a niche which other armies do not and that is stealth. I am really looking forward to expanding my Genestealer Cult army and trying out all of the new units.

Order yours from our friends at Battleground Gaming here https://battlegroundgaming.co.uk/

Let me know what you think in the comments down below. Also, if there are any questions you have, or if you would like me to cover something in more detail, then please let me know.