Hello everyone,
I hope you’ve had a great Christmas and New Year, I’m back to share the new Gloomspite Gitz battletome with you today. 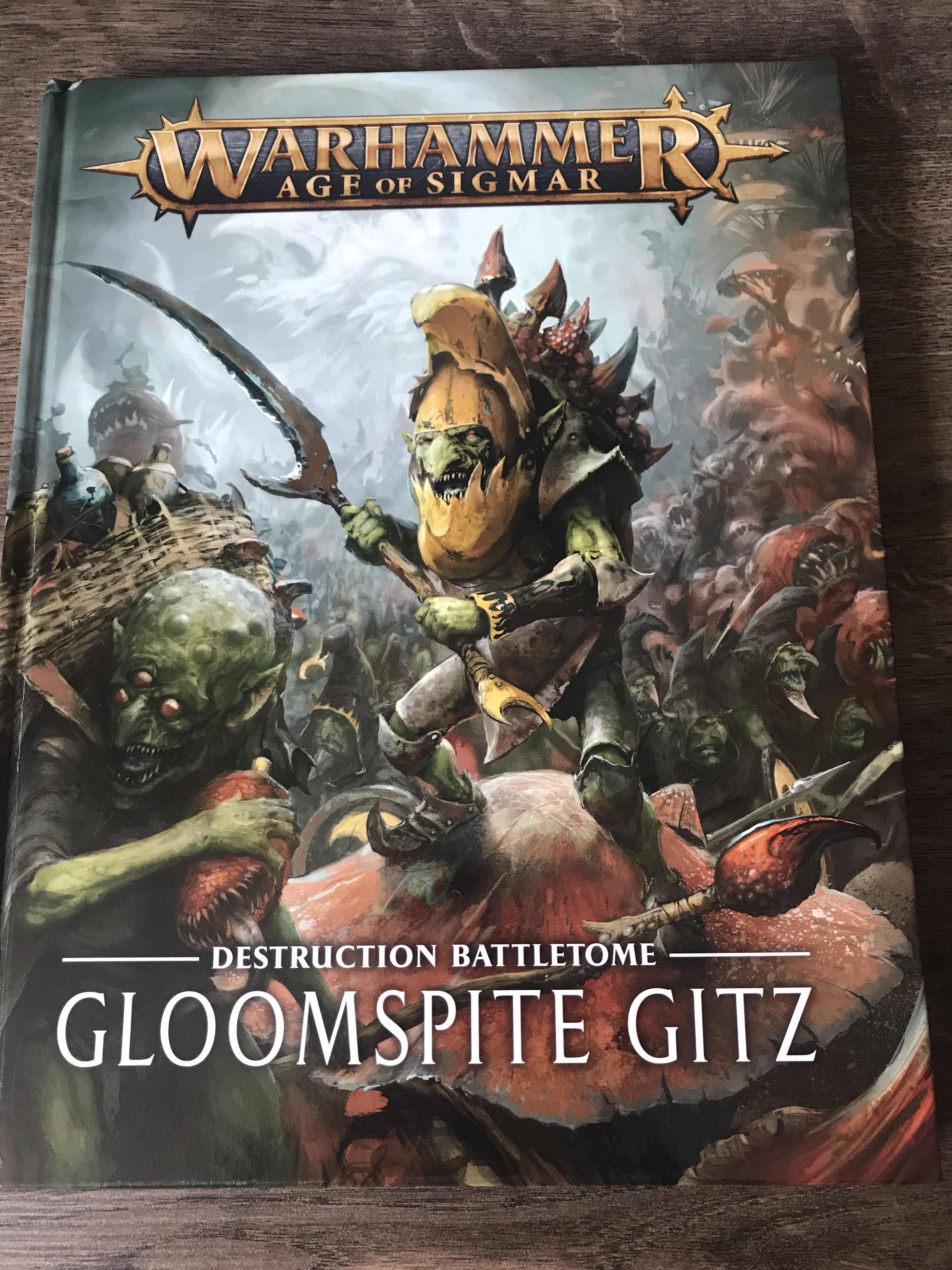 This is an army I’ve been looking forward too for a while and after the release of the Fungoid Cave Shaman we here on the blog suspected they would eventually update the Moonclan range. Trolls or Troggoths, were not something I expected though! 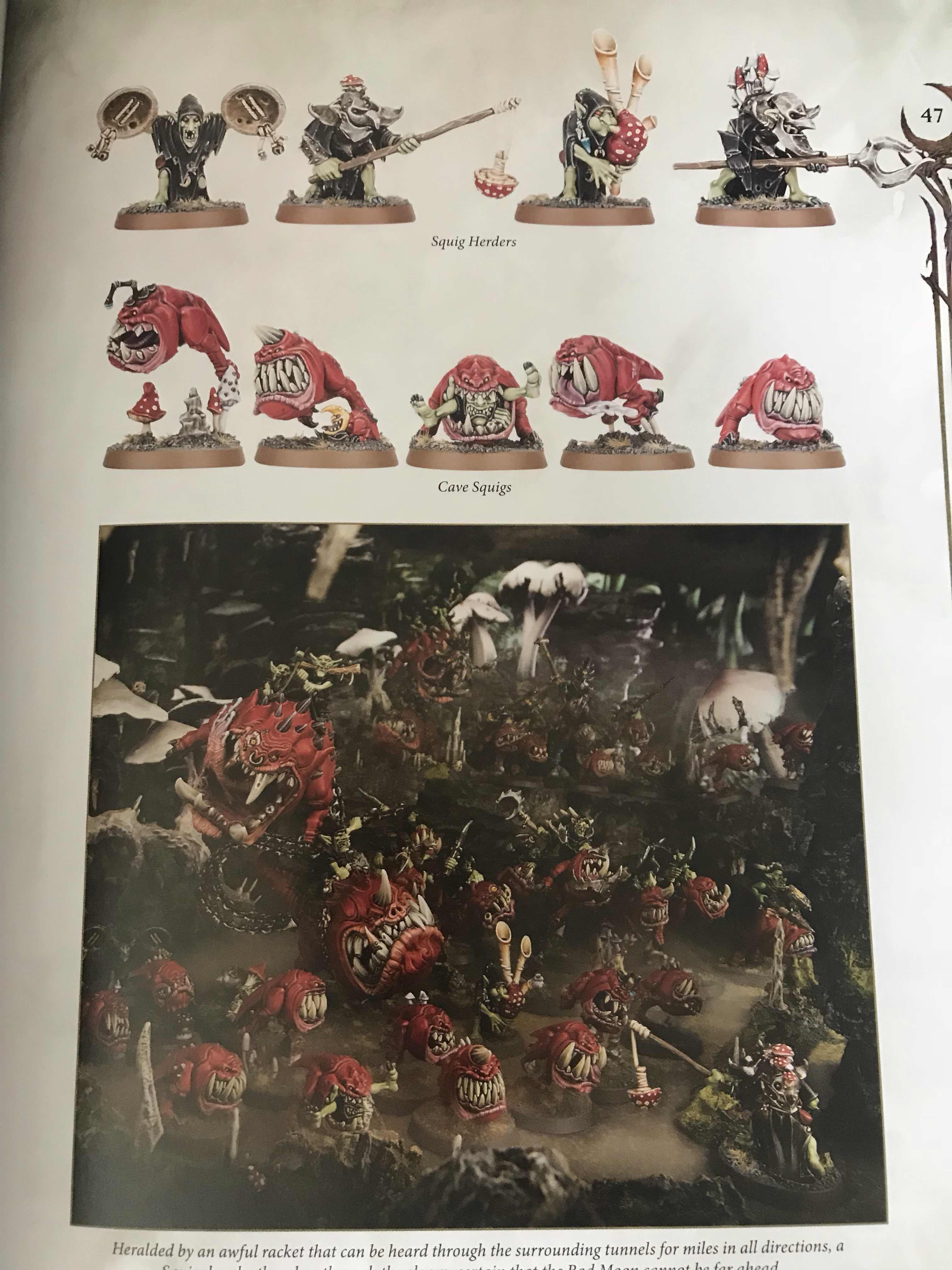 I do really like the new range of models and in particular I think the new Rockgut Troggoths and Squigs are stunning models, so I’m hoping there is plenty of customisation available for them both.
The only disappointment for me was with the Dankhold Troggoth as his face and skinny legs could have been a bit meaner and thicker to hold up his enormous weight but I am at the New Years Open day today so let’s see if seeing the model in person changes my mind!
So without further adieu, let’s get into the book...
First of all, it is another great book again like the other more recent battletomes, it’s packed full of rules and customisation options for playing either Moonclan, Spiderfang or Troggoths!
Contents below... 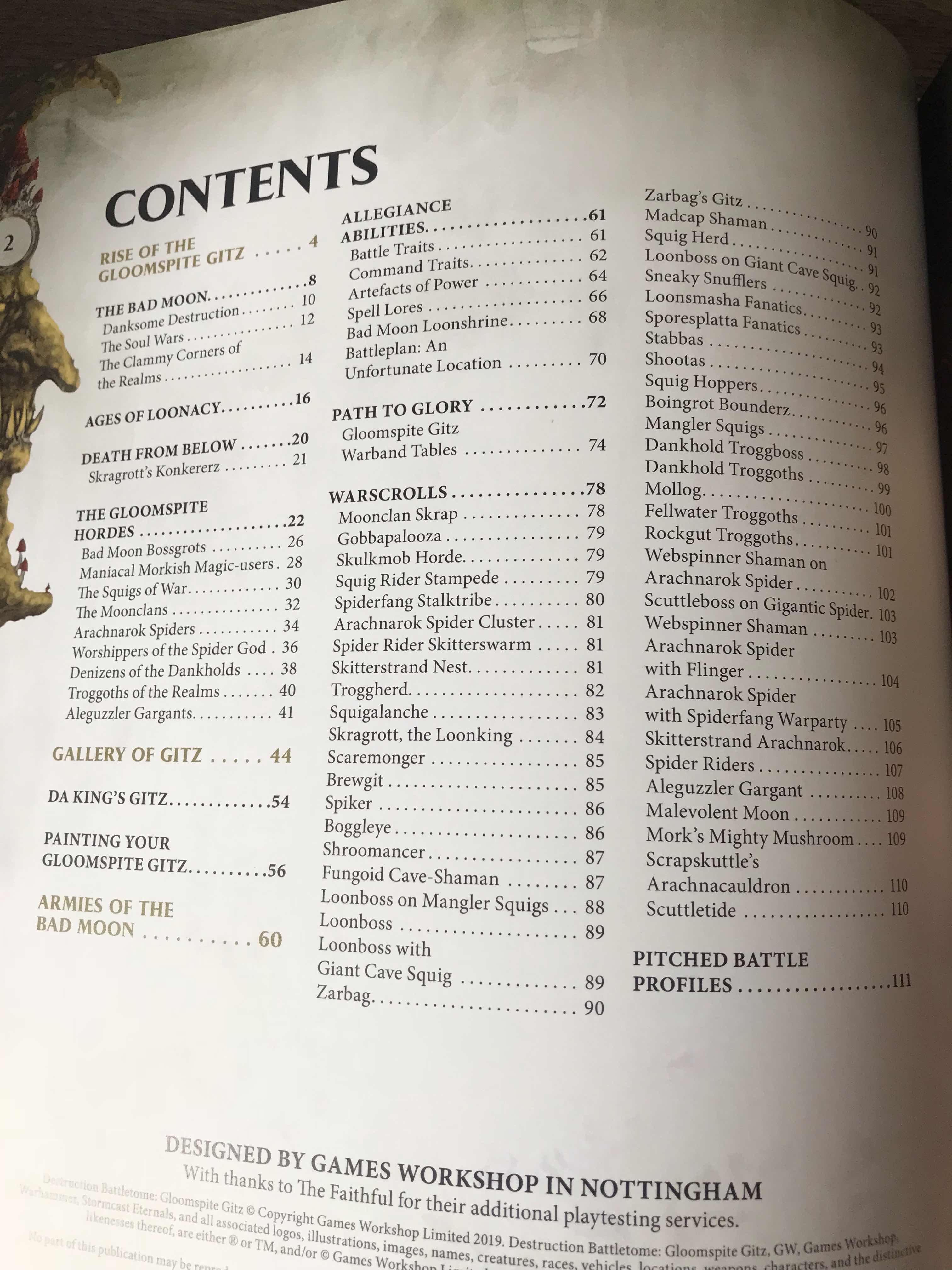 As usual there is plenty of background to get into if you’re a narrative player. 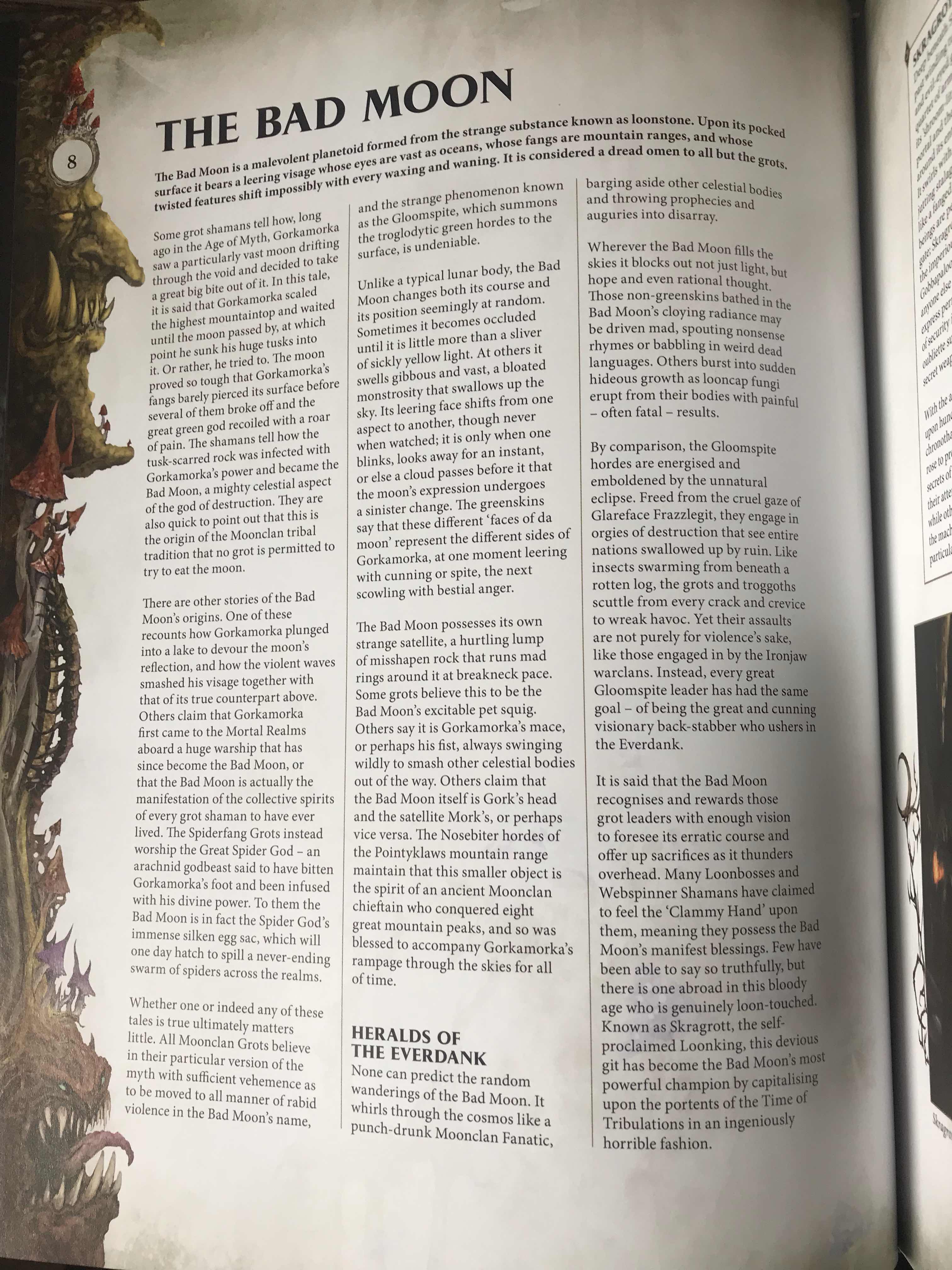 I’m not hugely into the games workshop background for the Gloomspite Gitz and some of AoS in general but we’ll eventually get around to including them in our campaigns where we’ll have our own background for them.
Troggherds though! What a great name. As you can see already I’m pretty excited about the Troggoths getting their own rules. 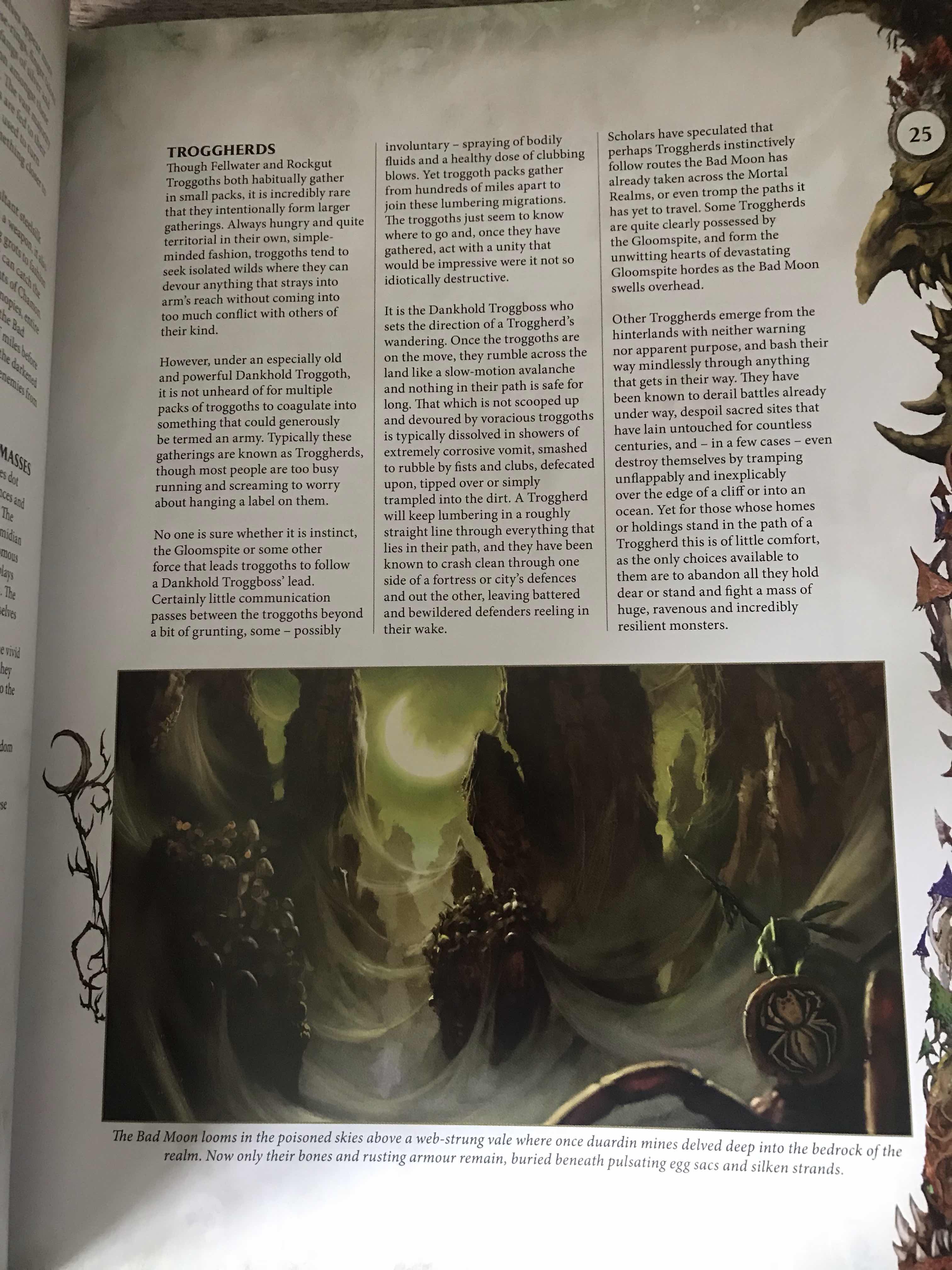 There is however a lot of rules to attempt to cover so I’ll give you an overview and then focus of a few of my favourite bits.
Armies of the Bad Moon
So, as mentioned before there are in fact three Factions in the book and other than recieiving their own command traits, artefacts of power and spell lores they also all benefit from the presence of the Bad Moon.
Battle Traits 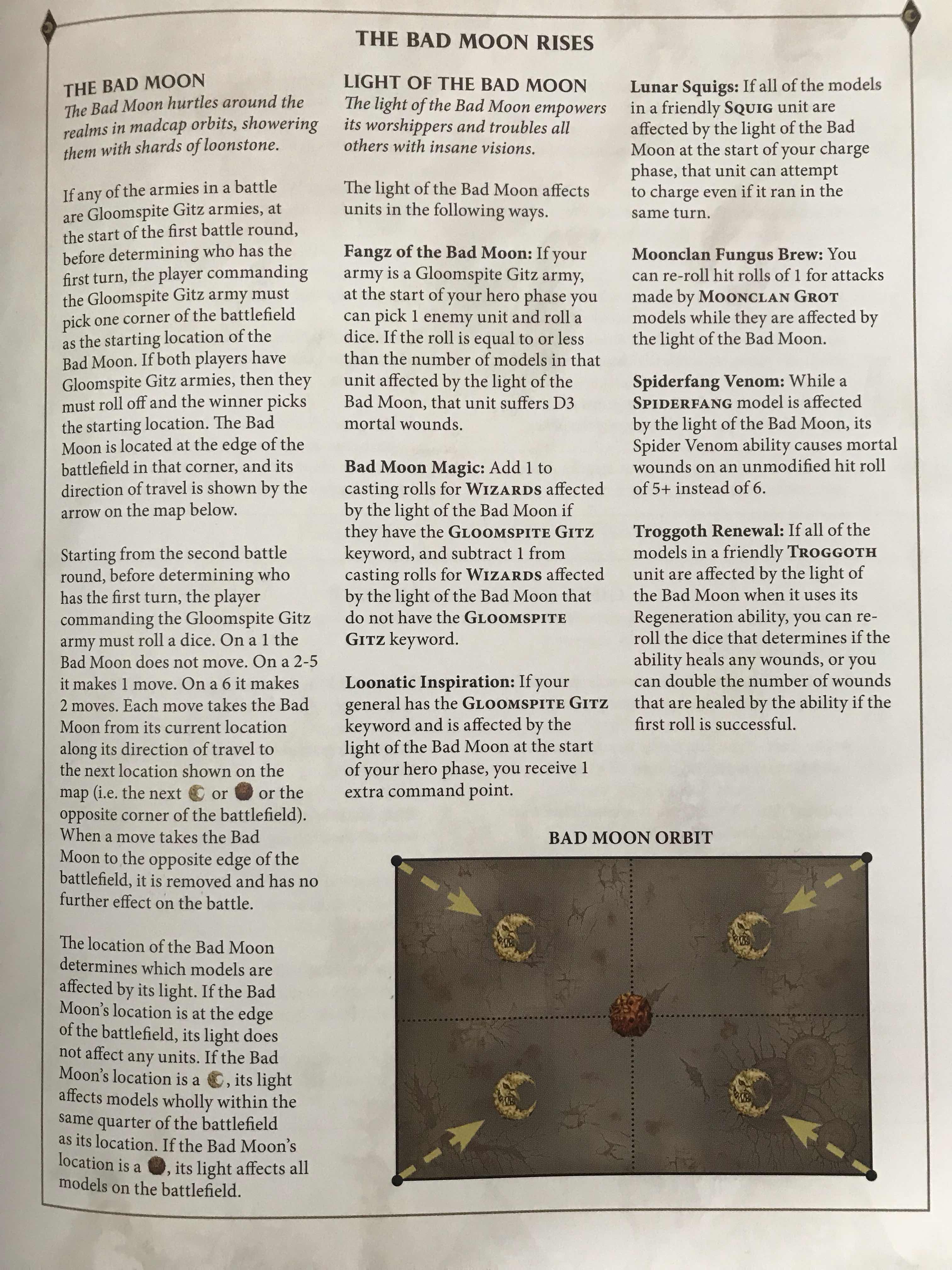 This is far too much information to explain without showing you the full picture but there are some significant buffs here for each faction.
Gaining an extra command point from Lunatic Inspiration and in particular the Spiderfang Venom
ability is very powerful by the looks of it. Although you’d have to be careful how you deploy or where you move too in order to gain its effects when you need them most.
Command Traits
Spiderfang
So carrying on from my previous point about the Spiderfang Venom let’s look at Spiderfang first.
This certainly seems like a very competitive army again now and I love that they’ve been given the battletome treatment. An Arachnarok is definitely on my to do list.
Spider Venom doing mortal wounds on a 5+ is much more achievable throughout the army with the new rules. 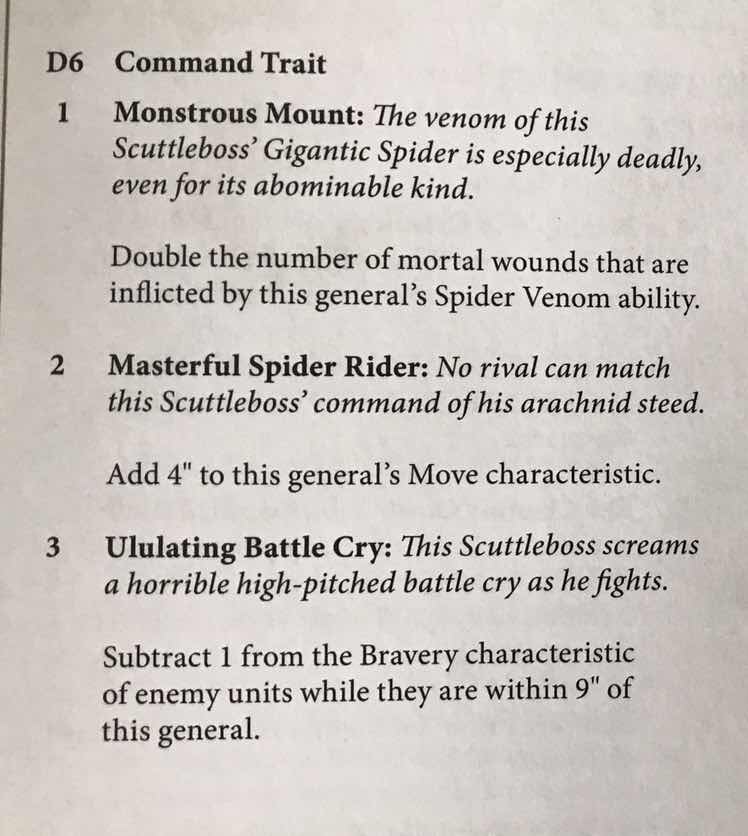 These are only available to a Scuttleboss but doubling the mortal wound output from your general is pretty decent and the extra 4 inch move is another great option to have.

Tough ‘n’ Leathery is another good trait, to give your boss 2 extra wounds. 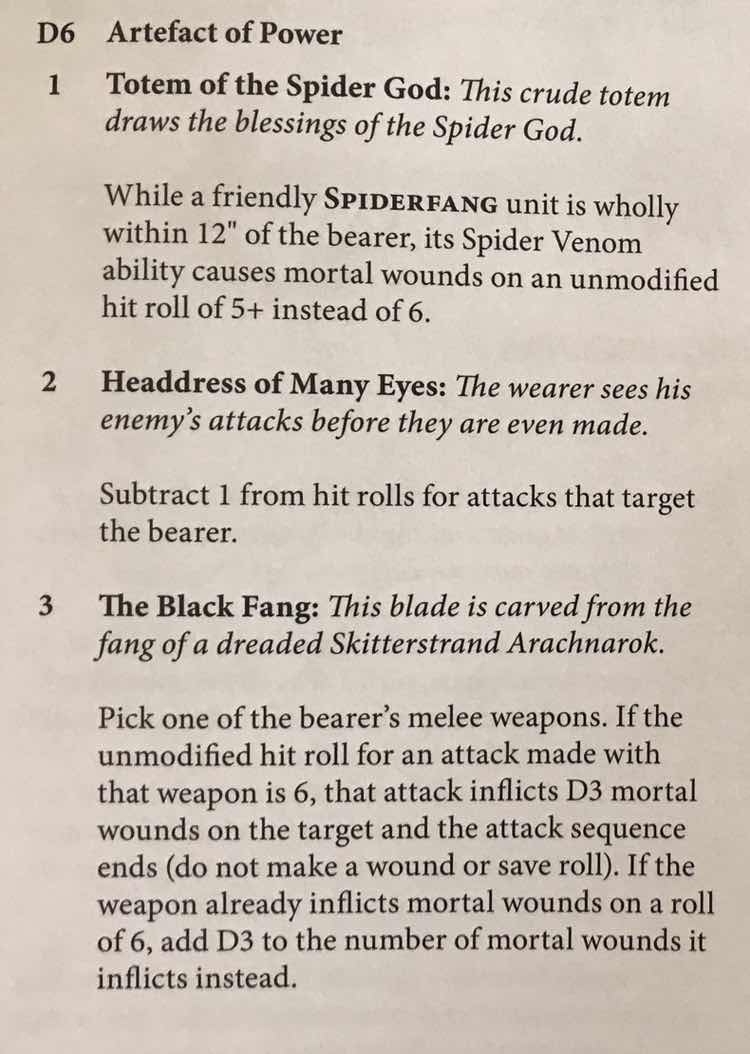 Totem of the Spider God is definitely the stand out choice, making that 5+ mortal wound ability more reliable is a must I think. But having the Headdress of Many Eyes on another Arachnorok riding hero will make them a lot more tanky. 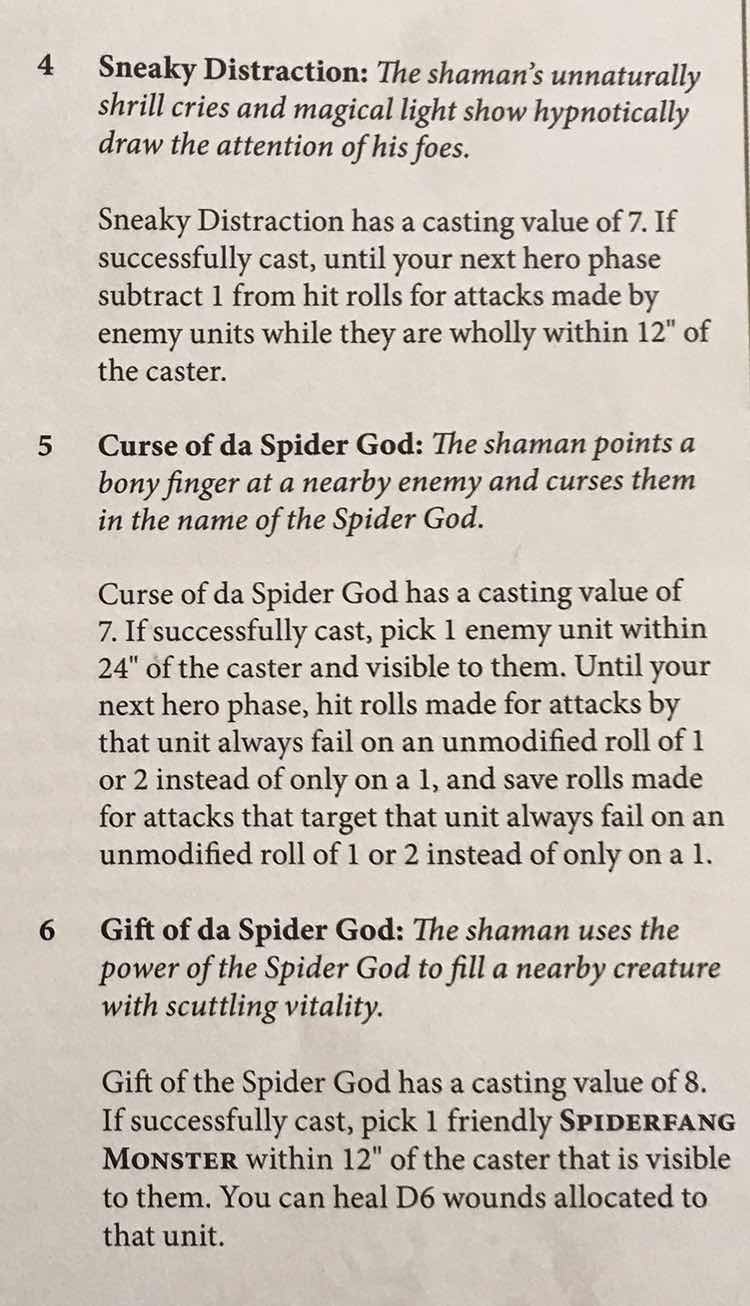 As you can see from above you make a character even more unkillable by using Sneaky Distraction. Even if you do lose some wounds Gift of the Spider God allows you to heal them back!

So let’s have a look at what the Trogherd Boss gets to take as it’s command trait.

Again I do love that the Troggoths now have their own faction, it also helps that the Rockgut and Fellwater Troggoths are beautiful models. With a darker colour scheme I personally think they’d look even better.

So first up we have a command trait with a great name again. Tough as Rocks adds an extra two wounds to their 10 wounds on their warscrolls. With their regeneration ability this could be a great choice. 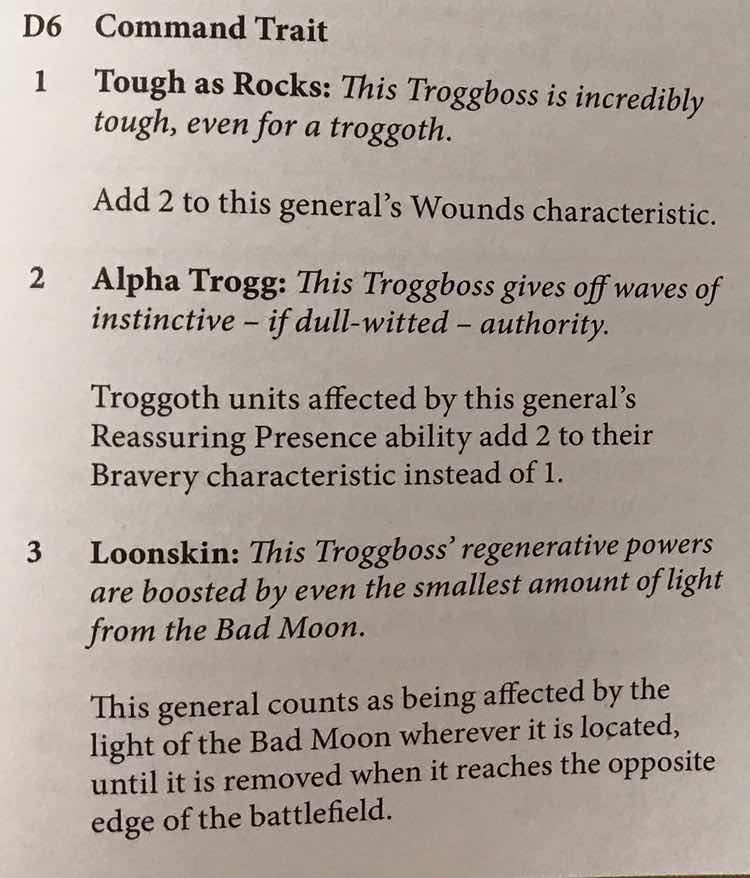 Mighty Blow also gives you the chance to reroll the damage on the generals boulder club which could see you doing some serious damage.

Trogboss has 3 attacks hitting and wounding on 3’s with -2 rend and  doing D6 damage! Rerolling those D6’s is a major boost to consistency.

There isn’t any magic that the Troggoths have access too but they do get some Glinty Gubbbinz. Another great name.

I do really like the Glowy Howsit an extra 4+ wound or mortal wound save is excellent. However, you just know you’re going to roll that one and lose the artefact! 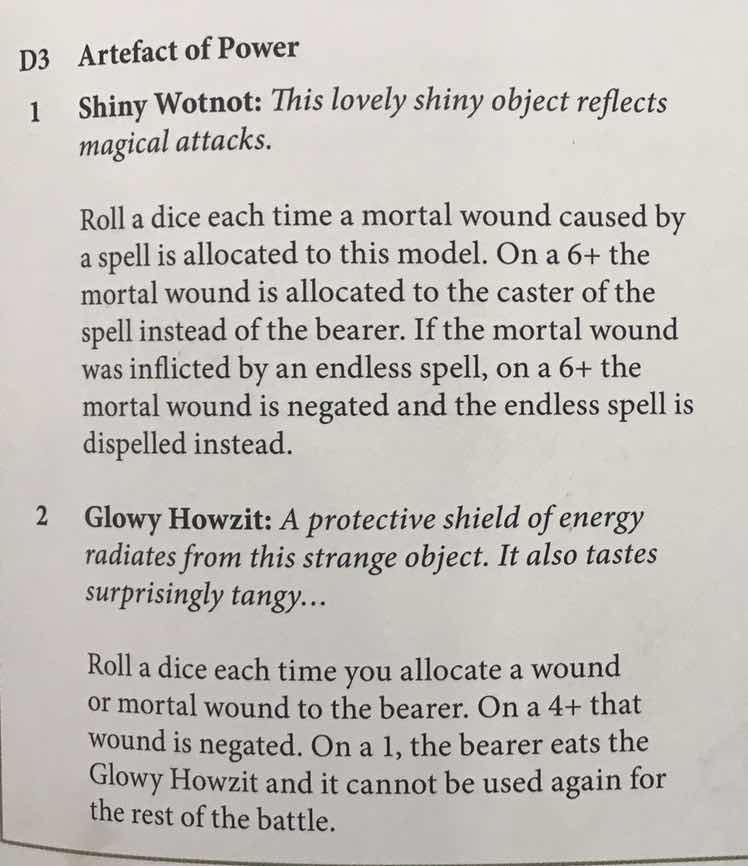 Moonclan
Command Traits
Moonclan are definitely a very appealing army to collect now, with some great redesigns like the Mangler Squigs and some great rules to go with them.
Now for the Traits a Loonboss can take... 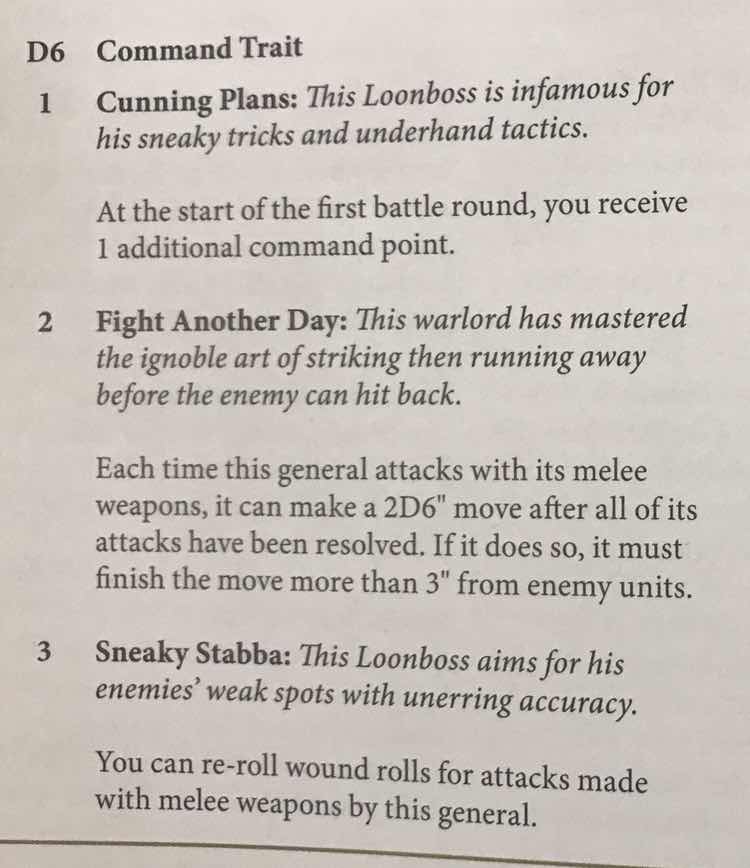 Cunning Plan isn’t particularly great as it’s just one command point in the first battle round but I do love Fight Another Day as it gives you some great movement potential throughout the game.
The wording doesn’t give much information about exiting the combat the character is in though, so that one could need to be clarified. But it would be perfect on a Loonboss on Mangler Squig.
Artefacts of Power
I told you there’s a lot in this book!
Onto Moonclan Artefacts for the Loonboss... 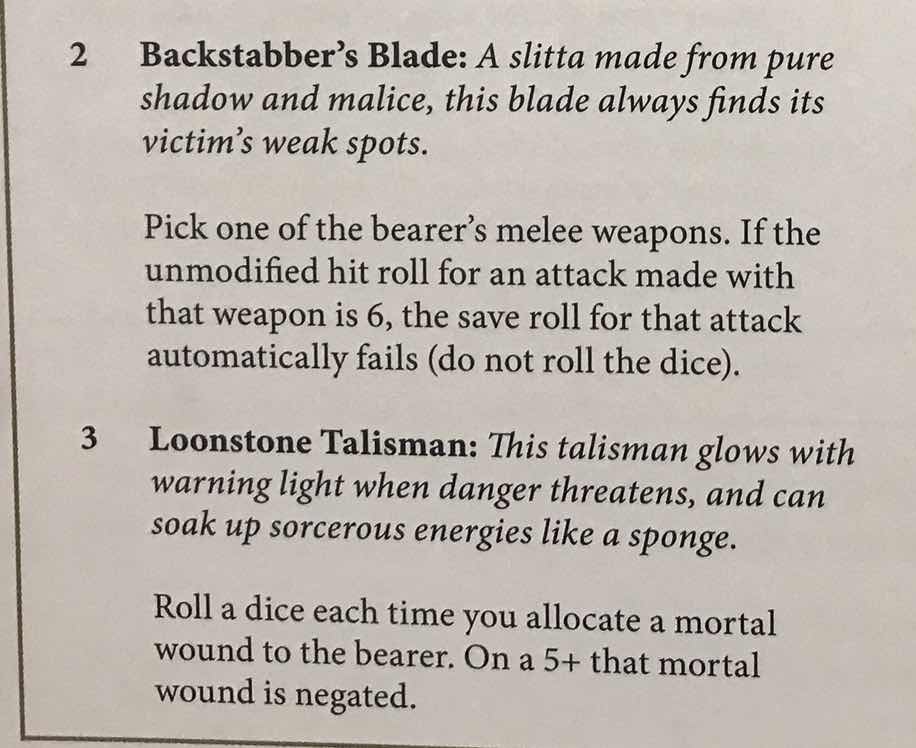 Backstabbas Blade is an artefact is for when you’re facing that very tough character on a 3+ save and rerolling 1’s with a Loonboss on Mangler Squigs. With its high amount of attacks on his moon-cutta there could be a fair few sixes being rolled.
The Loonstone Talisman is also another nice artefact for giving your Loonboss some survivability.
Lore of the Moonclan
So the last part of this section, but some great spells to finish on! 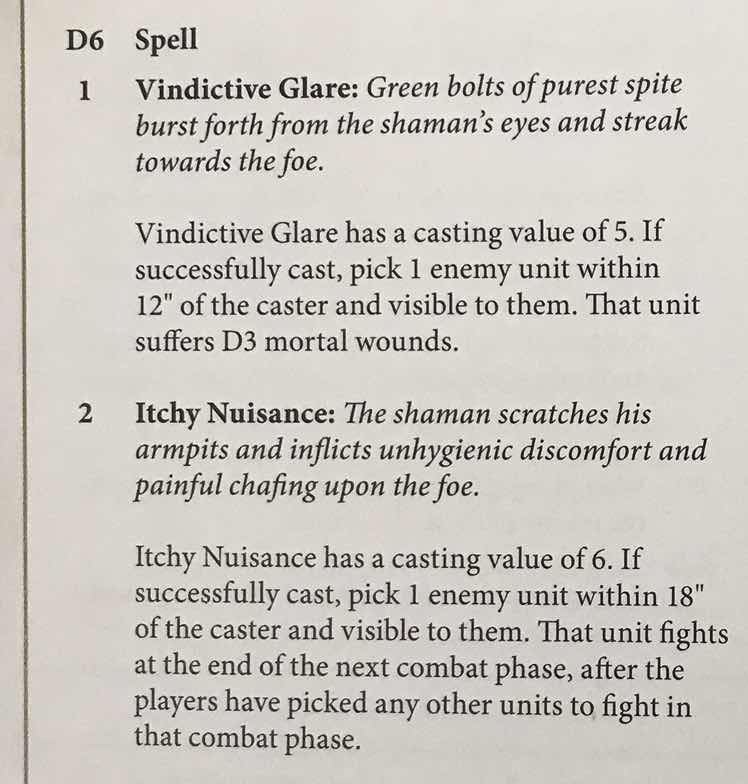 Itchy Nuisance is back and again it’s a great spell. Mischievously making the enemies best unit fight last so your gitz can get to stabbin em first.
Another great returnee is the Hand of Gork allowing you to remove a unit from your army and place them 9 inches away from an enemy unit anywhere on the board. Obviously they have to be out of combat and 3 inches from an enemy unit, but both of these spells add some great tactical flexibility.
Battalions
So there are a whopping ten battalions in the new book. I’m pretty sure we’ve already seen my favourite the Troggherd, so we can have a look at another... 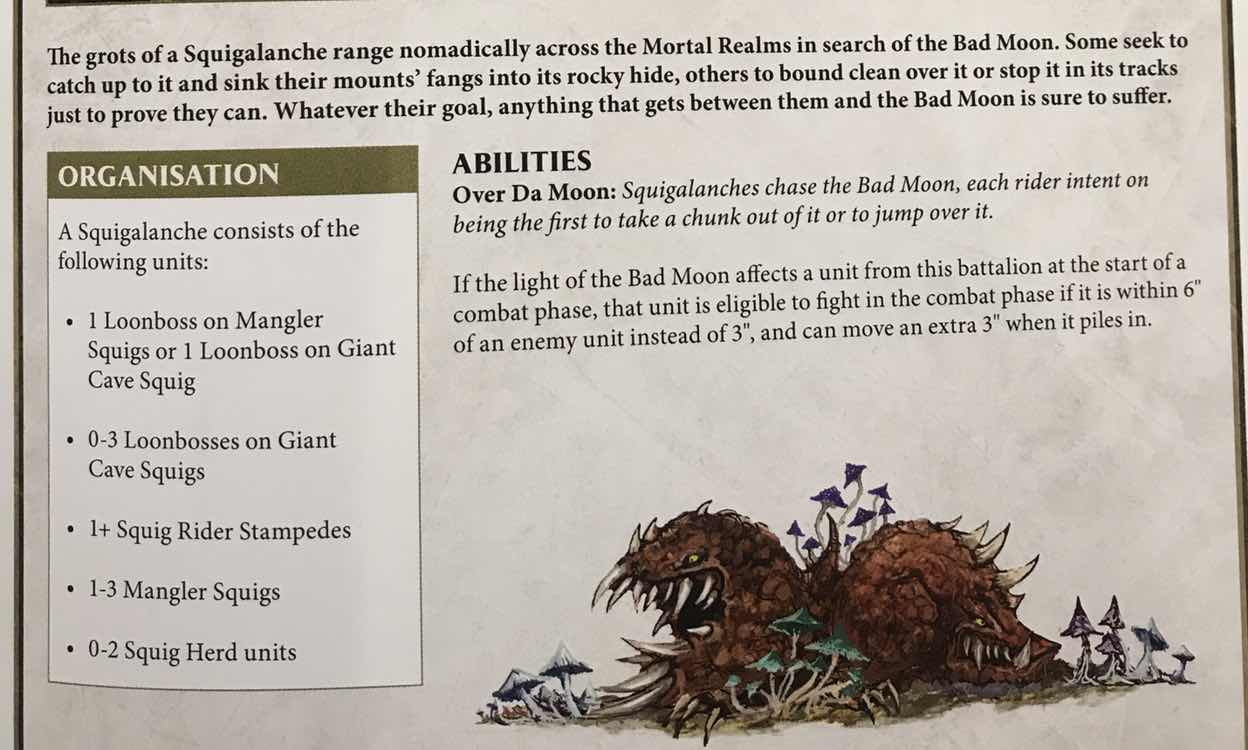 This seems pretty powerful at first glance! At 90 points it’s seems pretty well priced, considering the Troggherd is a huge 180 points! Attacking at six inches and an extra pile in of 3 inches would be very handy!
Warscrolls
Now there are a lot of new units in the book so I’ll only be covering a few of them but let’s start with the Model I’ve been mentioning a lot the Loonboss on Mangler Squig! 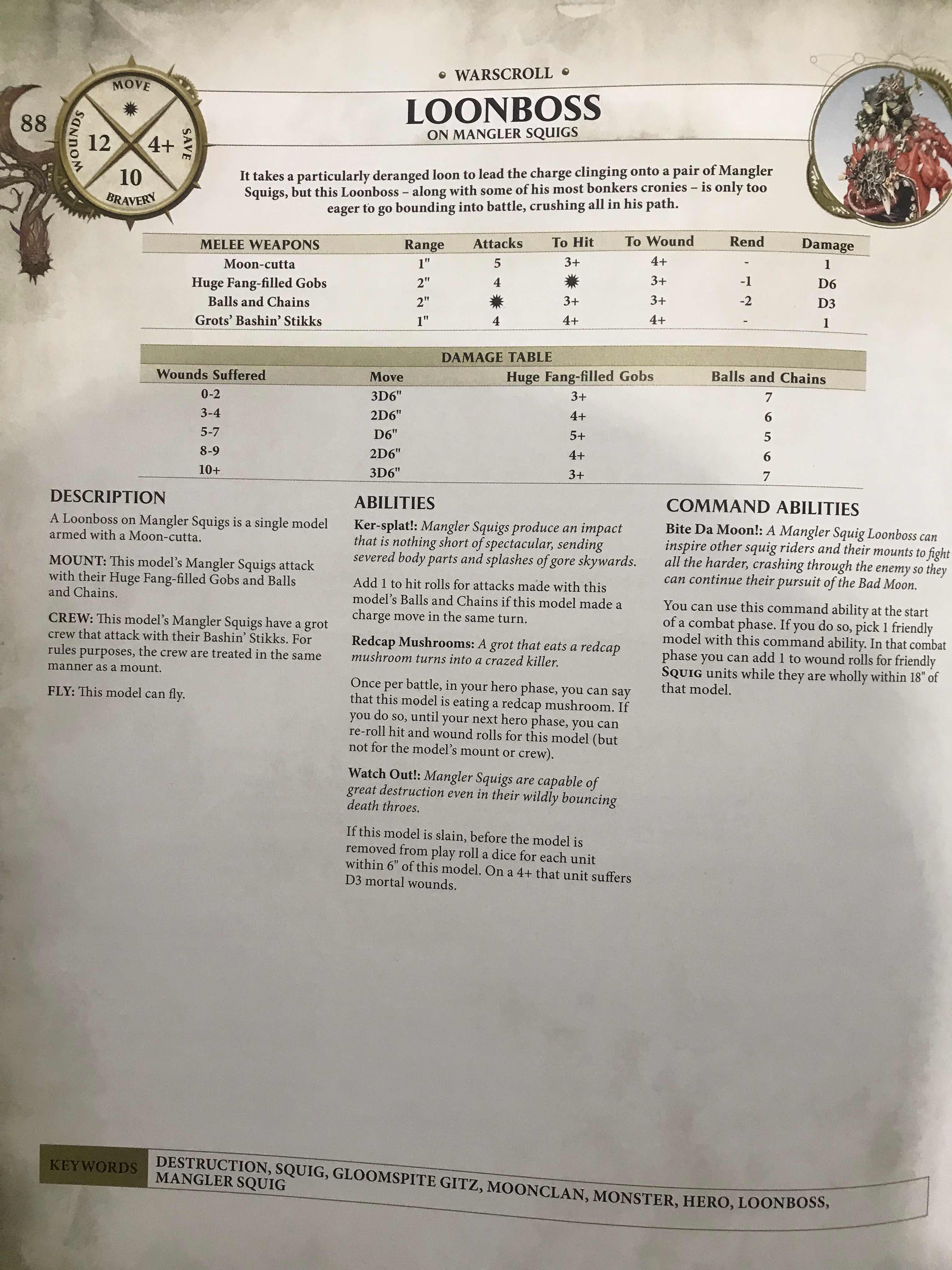 You’re looking at doing a whopping 20 attacks in combat with this beastie! A 4+ save isn’t bad either and you also have the artefacts make those 20 attacks hurt or go down a more defensive route.
Next are the awesome new Squig Hoppers! 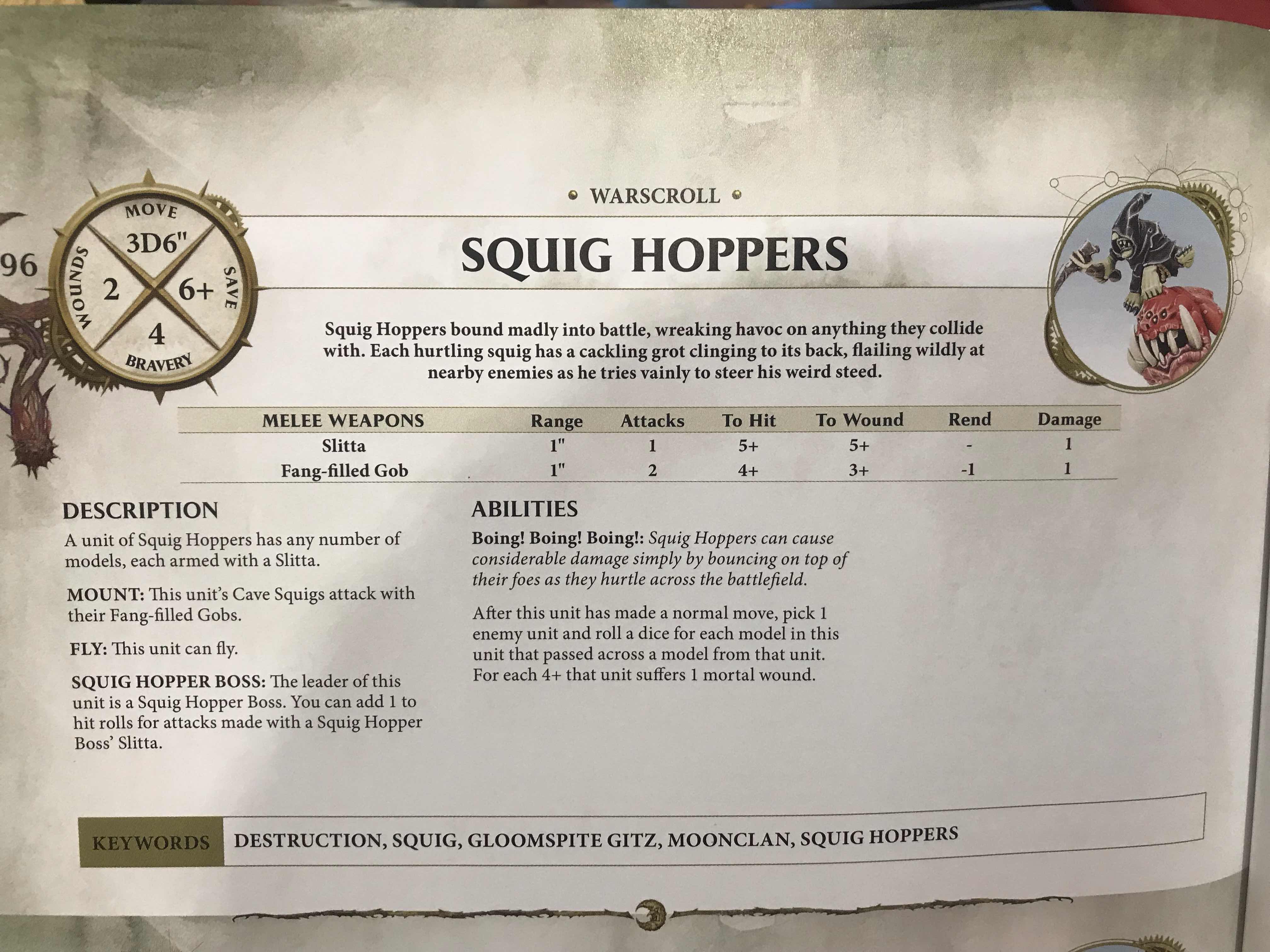 I’ve never really looked at the old scrolls for these so I can’t compare any changes but that 3D6 movement could make or break your game! Also the flying ability is just going to make for some crazy games, definitely a very interesting army to play!
Now these are my favourite models from the release... 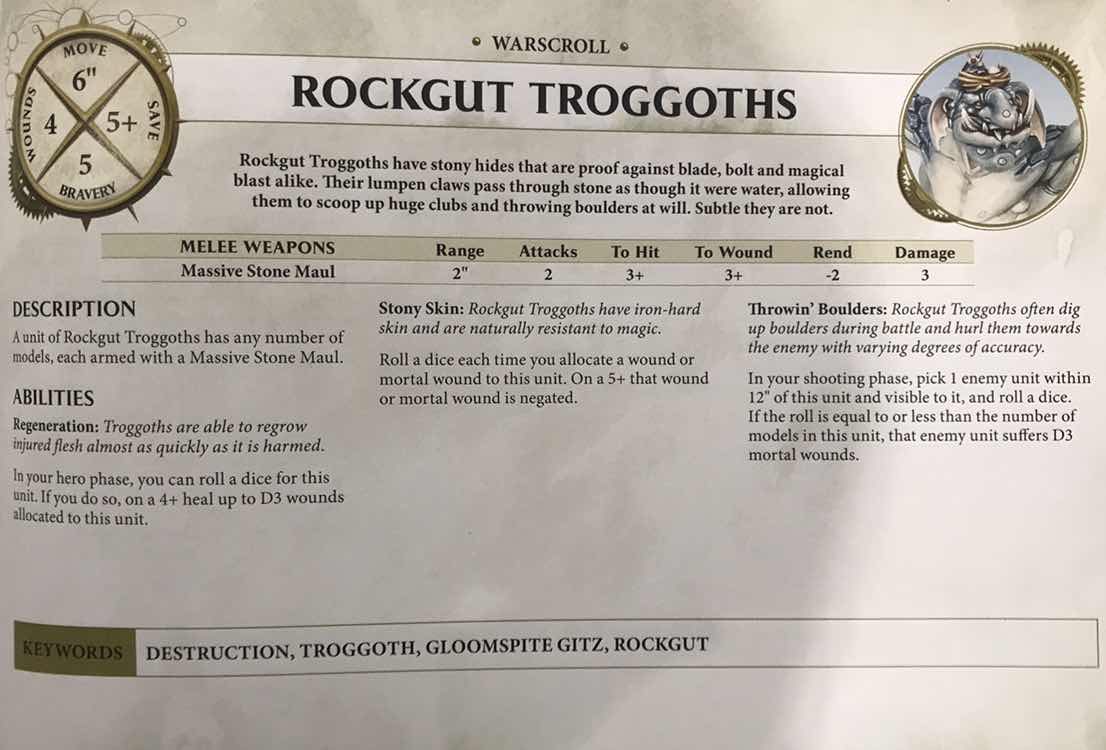 I really like how this unit could be held back as a ranged unit to lob boulders at the enemy, although I doubt how effective it can be at such a short range.
Also two 5+ saves and regeneration abilities could make them pretty tough.
I think I’ll be buying them under the rule of cool over anything else!
Points
As for points there’s not been a huge amount of change for existing units, the Grots and Rockgut Troggoths are still the same cost and the Squigs and Squig hoppers have only increased by 10 each so not much to talk about on that front.

However, the Arachnarok has now been split into three separate warscrolls with different options accounting for the difference in points. At 300 the Webspinner Shaman on the Arachnorok is the equivalent of a Loonboss on Mangler Squig for price so it’ll be interesting to see which turns out to be the superior leader/behemoth.
As for battalions the Trogherd at 180 does seem quite expensive for what it is but maybe I’m missing something!
Conclusion
From a gaming point of view I think they will be an intriguing and entertaining army to play and I’ve barely scratched the surface on the armies game play. There a lot of cool mechanics with the squigs and spells to make your games tactically interesting. The bad moon mechanic isn’t something I’m a huge fan of but it will definitely add to the amount of planning and movement you have to be aware of in your games. I can’t wait to see some Troggoth armies though.
So overall a great book, I have a few gripes about one or two model designs but overall the release was brilliant. The new terrain piece is also a lovely model and I hope this release trend continues for other factions including the older ones (Dispossessed please GW!!)
Unfortunately the scope of these blog reviews are limited as there is just too much information to cover by text but with other reviews and Games Workshop doing their own previews hopefully you’ll be able to piece a lot together to make an informed decision on buying the book. I’d wait to see how good the Troggherd is first before buying an army of them!
Thanks again for reading,
Aveinus Kaane
Posted by Aveinus at 13:11