Hello everyone,
It’s time for part 2, where we’ll take a look at the Warlord Traits, Relics, Psychic Powers, Datasheets and Points. 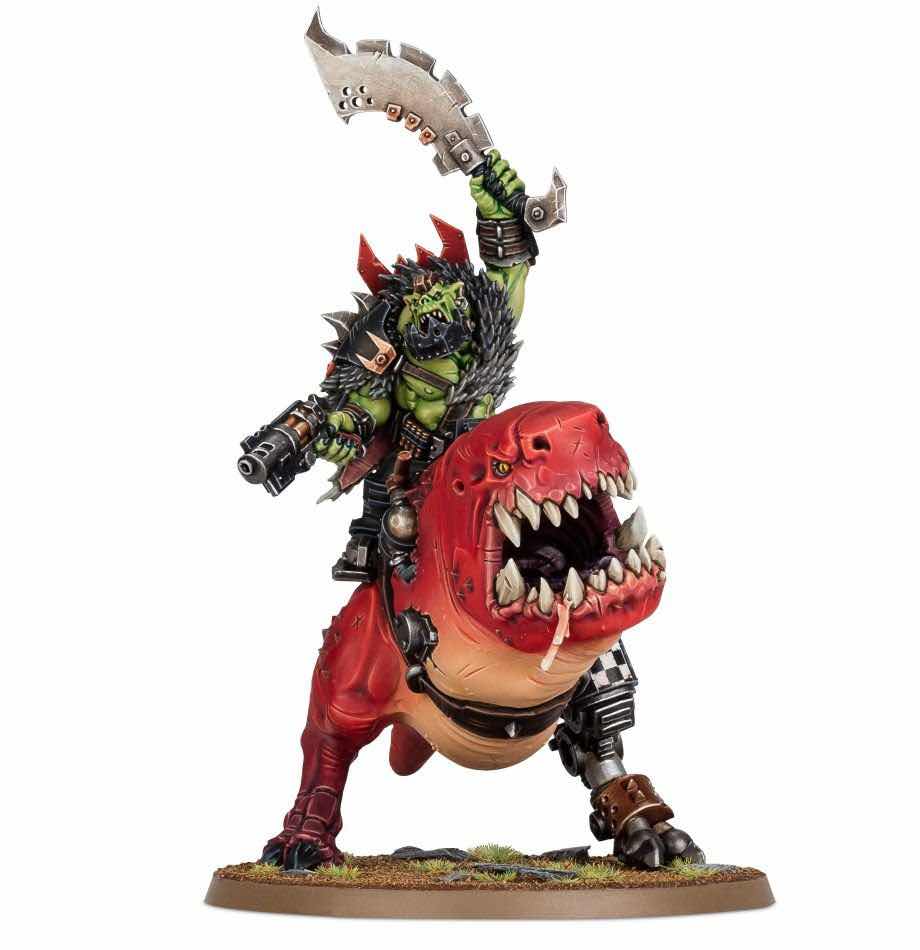 Warlord Traits
A major boon in this new codex is the strength of Ork characters, particularly Warbosses. Combining them with Traits like Ard as Nails for a minus 1 to wound aura means you can make some really survivable characters especially combined with some of the Relics on offer. 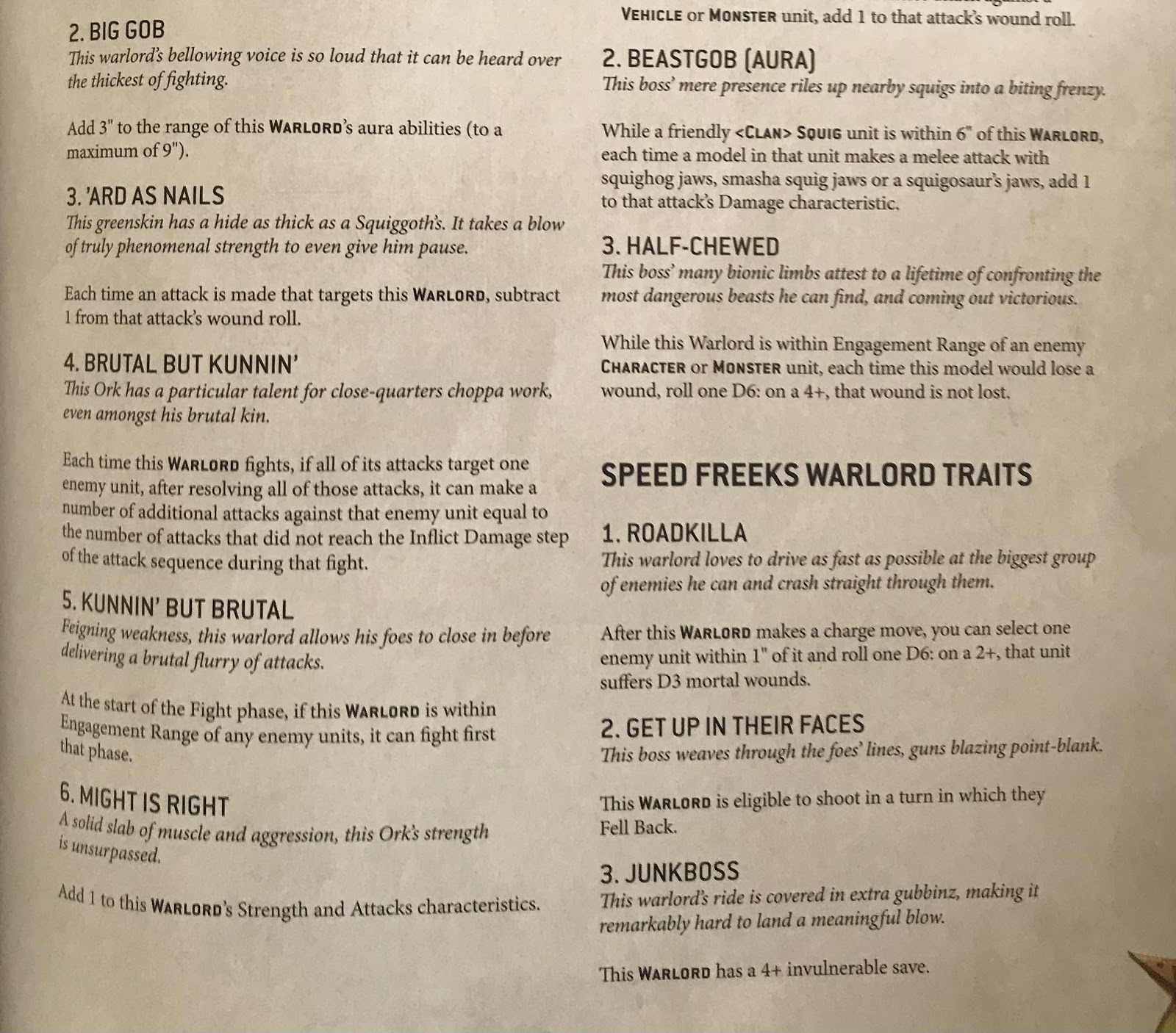 Brutal but Kunnin is the obvious pick for an offensive character but I do also like Big Gob. Pushing that +1 to hit aura out to 9 inches could be really effective in some builds, with lots of core or character units nearby.
Relics
There are some excellent relics in this book, I would personally combine a relic or warlord trait that grants  an improved invulnerable save with something strong in combat.
As you can see below Supa Cybork body is amazing for this role, combined with Brutal but Cunning and you’ve got a great combination. 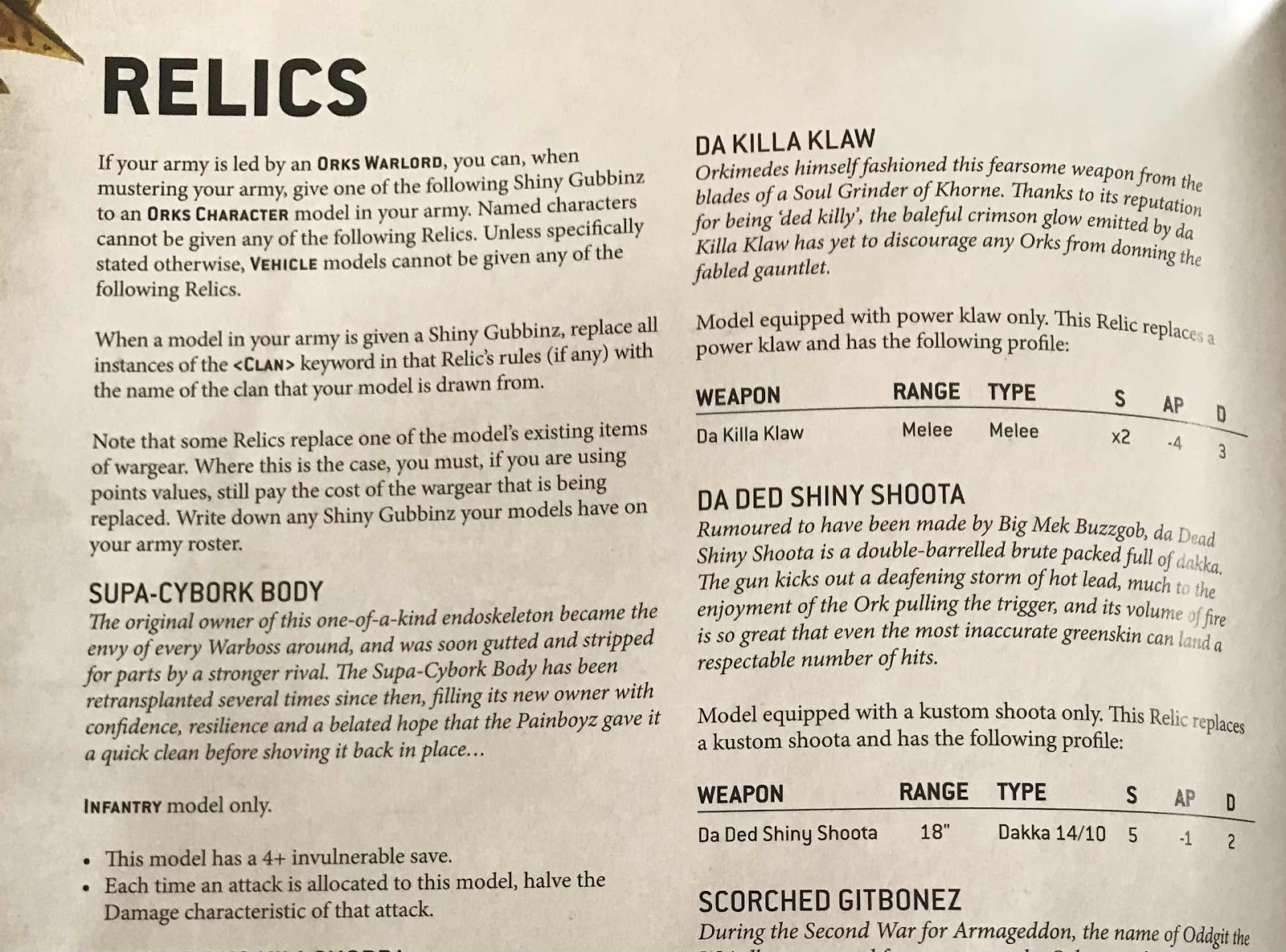 Da Killa Klaw is also a really nasty relic which you could combine with Da Best Armour Teeth Can Buy for that +3 save and +4 invulnerable save on your Bad Moon character.
Power of the Waaagh!
I think here you have to be looking towards the classics of Da Jump and Warpath for the movement it gives you for playing the game and for the extra attacks. I favour Da Jump as I like it’s flexibility for throwing a late game Warboss or Boy unit across the board from their hiding place. 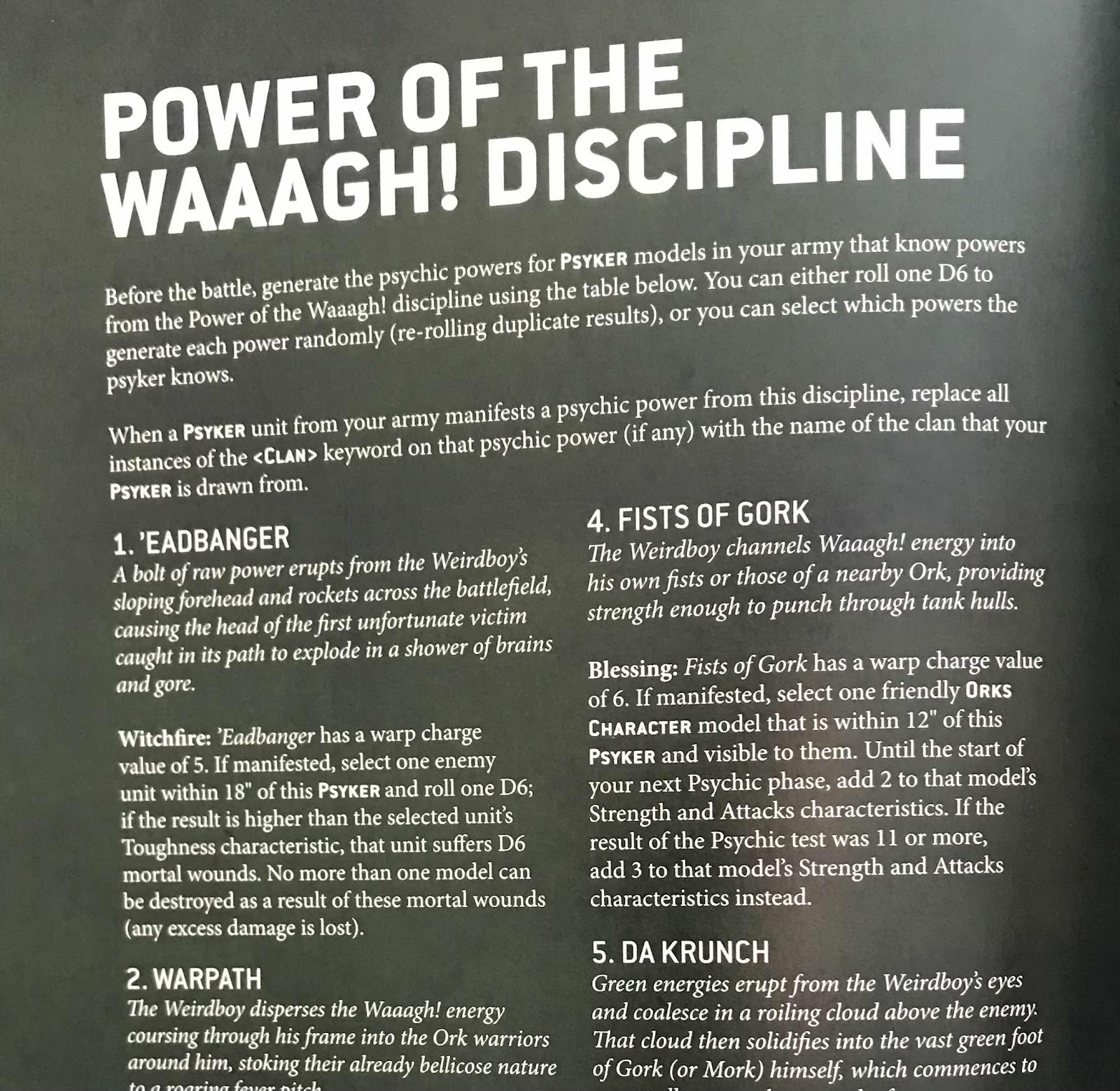 Looking at Fists of Gork though, I’d be very tempted to take this and use it on the Beastboss on Squigsaur. What a monster he’d be!
Datasheets
There’s a fair bit more to talk about here but we’ll mention some of the big changes.
Dakka weapons have changed to the two values as you can read below, I think this is a way of reducing those re rolls that slowed down playing with orks so much.
My Bad Moons do miss the rerolling ones but having played a few games now, I do think it was better to move away from this. Bad Moons certainly do benefit from the extra 6 inch range, meaning they’re more likely to be in half range for those extra shots. 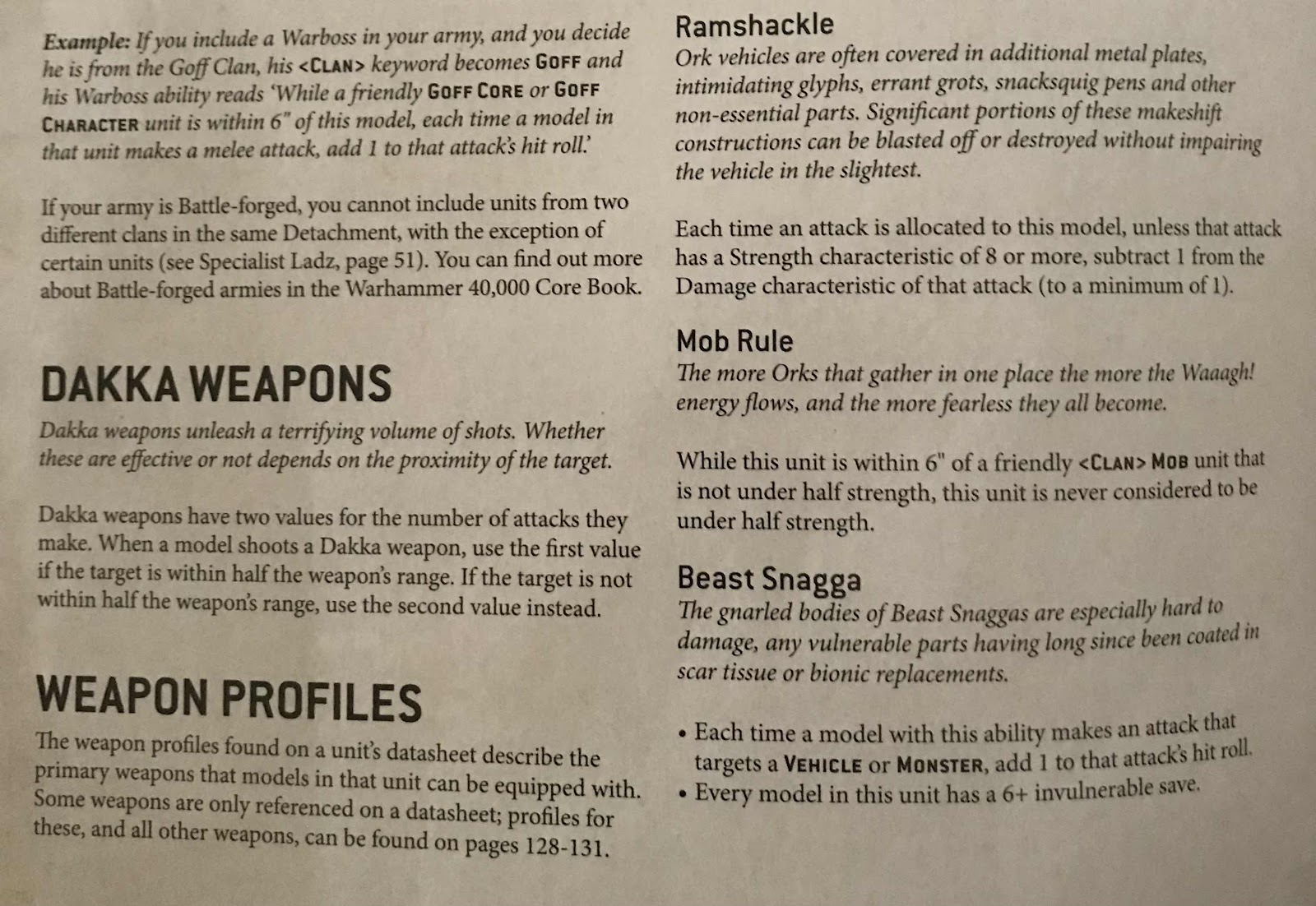 Ramshackle is obviously a strong ability for vehicles making them a lot more durable than the old ramshackle rule.
One thing that is a shame are the changes to mob rule, even with T5 Ork boys still die fairly easily to small arms fire, I often take at least 20 casualties on a 30 Ork unit in the first turn if I fail their charge. This means morale will always be an issue for any big units now and so Insane Courage is the only way to keep them around for 2 CP.
However, I do like this tactic as it is a great way of hemming your opponent in on their first turn and potentially denying them an objective with a charge. Even though you’re losing most of a big unit if you fail the charge, they still have a tactical use and with insane courage they will stick around into turn 2. It can also be a great distraction piece to help the rest of your army advance unscathed.
Calling a Waaagh!
Calling a Waaagh has now disappeared from the Warboss datasheet and into its own rules section. 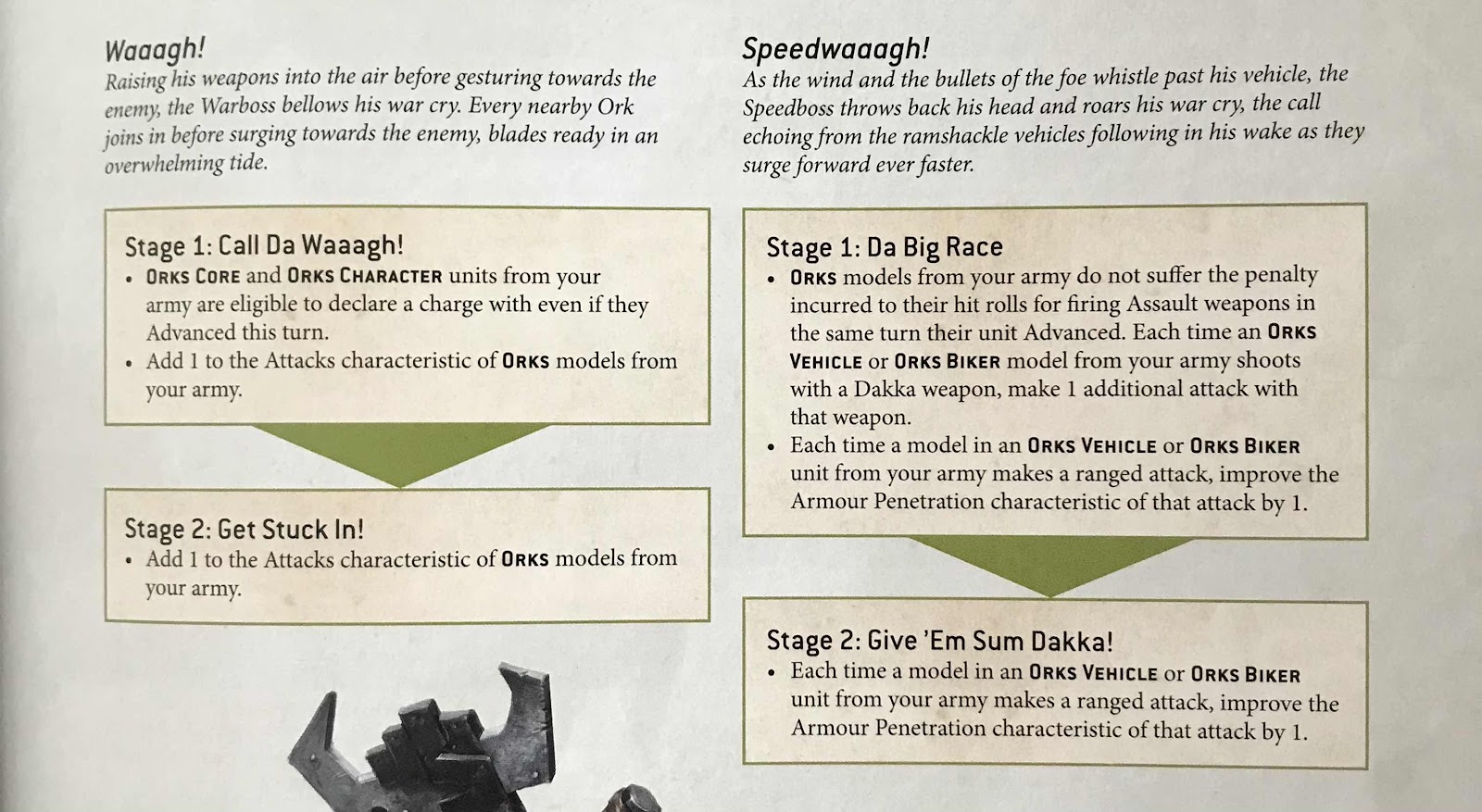 These are just once per battle abilities but will certainly pack a punch if chosen in the right turn. This will take some planning to have as many Ork core or character units getting into combat on the same turn but you’d expect turn 2 and 3 to be the best turns to use it in.
Datasheets
Obviously there is far too many units to look over on a here but we’ll look at a few of my favourites. 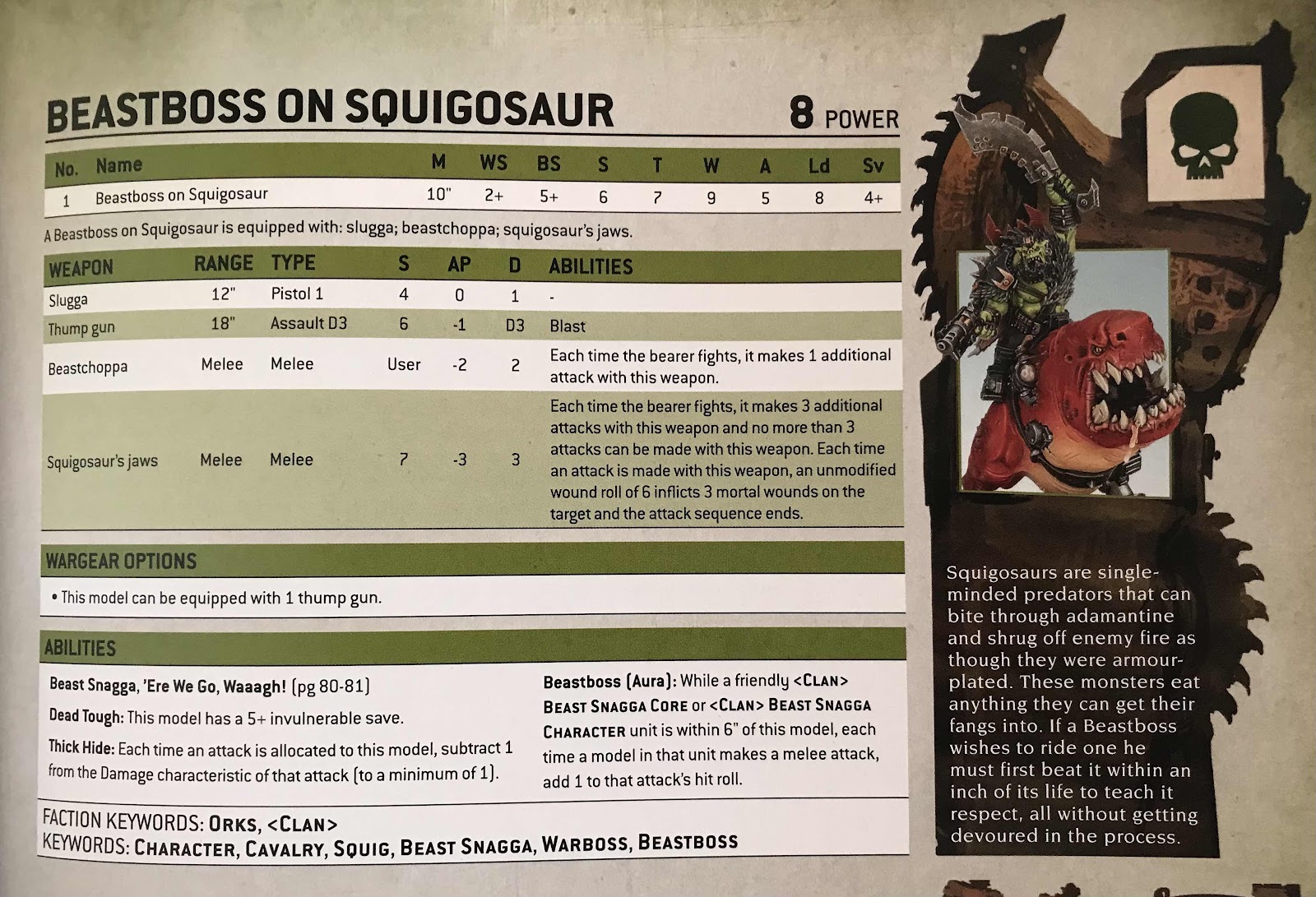 An excellent choice in an aggressive army, movement 10, it’s getting up the board pretty quick if he runs on turn one. Having an inbuilt -1 damage rule is also amazing so picking a trait or relic that would grant an improved invulnerable would make him a brilliant hammer unit.
Da jump some Snagga boys up the board with him and you’ve got a powerful combination of threats. 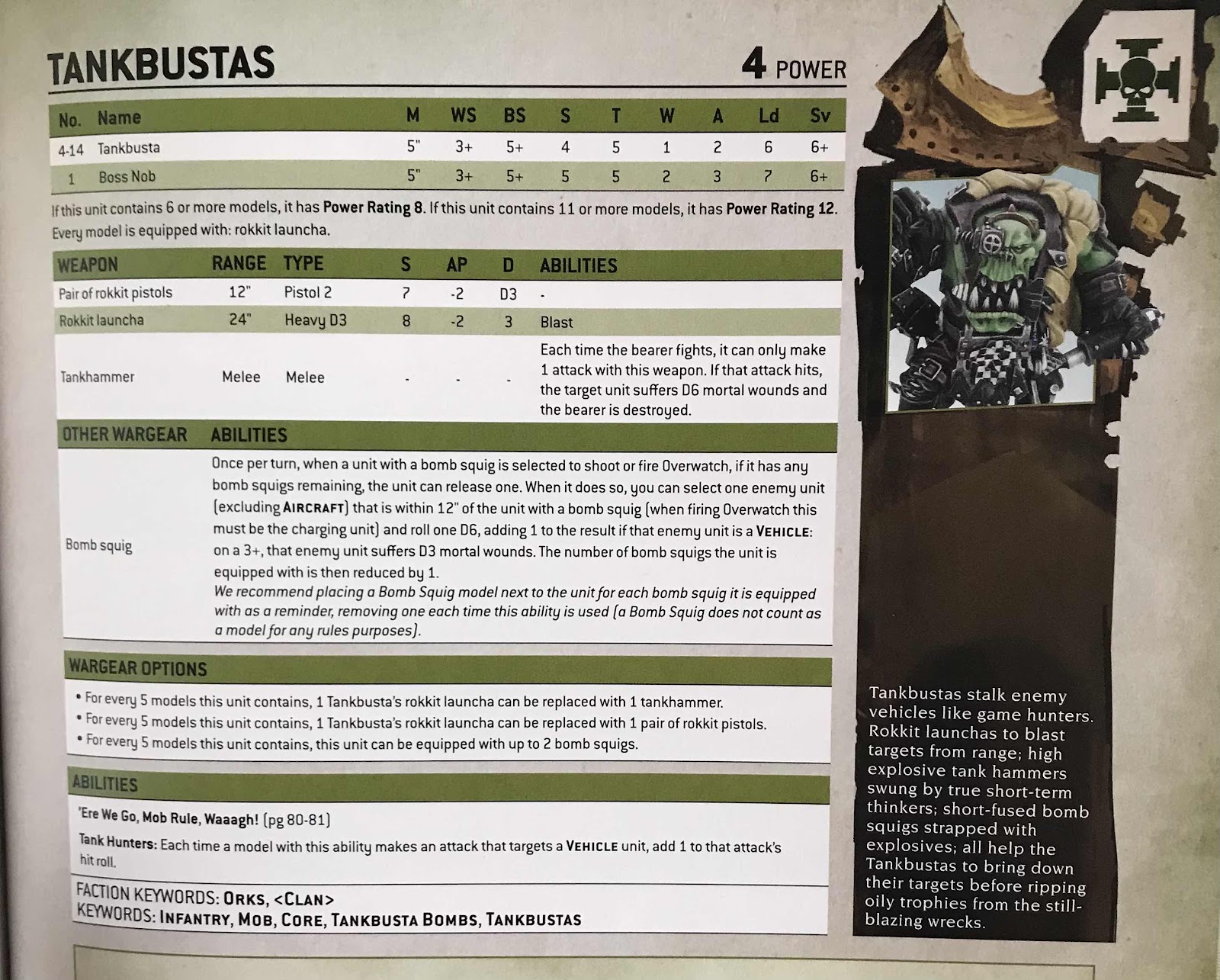 Their older sculpts are now terrible but they’re pretty easy to kitbash if you use Burna Boyz or Lootas.
They seem like a mixed bag but D3 Rokkit shots on a unit of ten is a lot of shots. They’re hitting on fours against vehicles now and as Bad Moons they’ve got that 6 inch range buff and can use Showin Off.
The only question is how to deploy them, Trukk or Tellyporta? 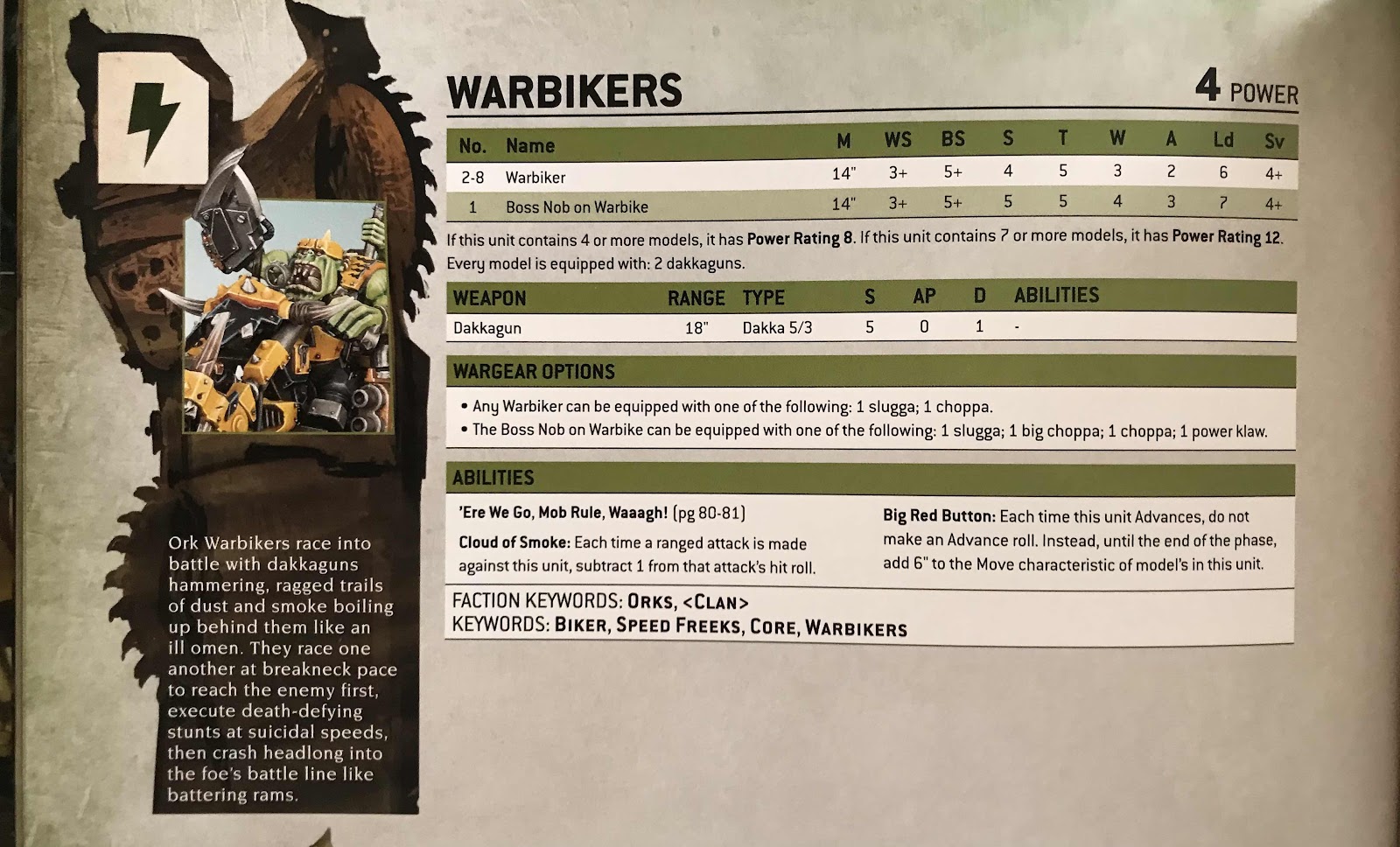 Next up Warbikers, a great unit in the new book. Just 25 points for 3 wounds and a built in rule of -1 to hit against ranged attacks! A bargain I think and it’s why I’m now painting up nine!
Great for objective or aggressive play I think they’re a must include for most Ork lists.
Finally you’ll all know about the Rukkatrukk Squigbuggies by now so another great unit is the Dakkajet. 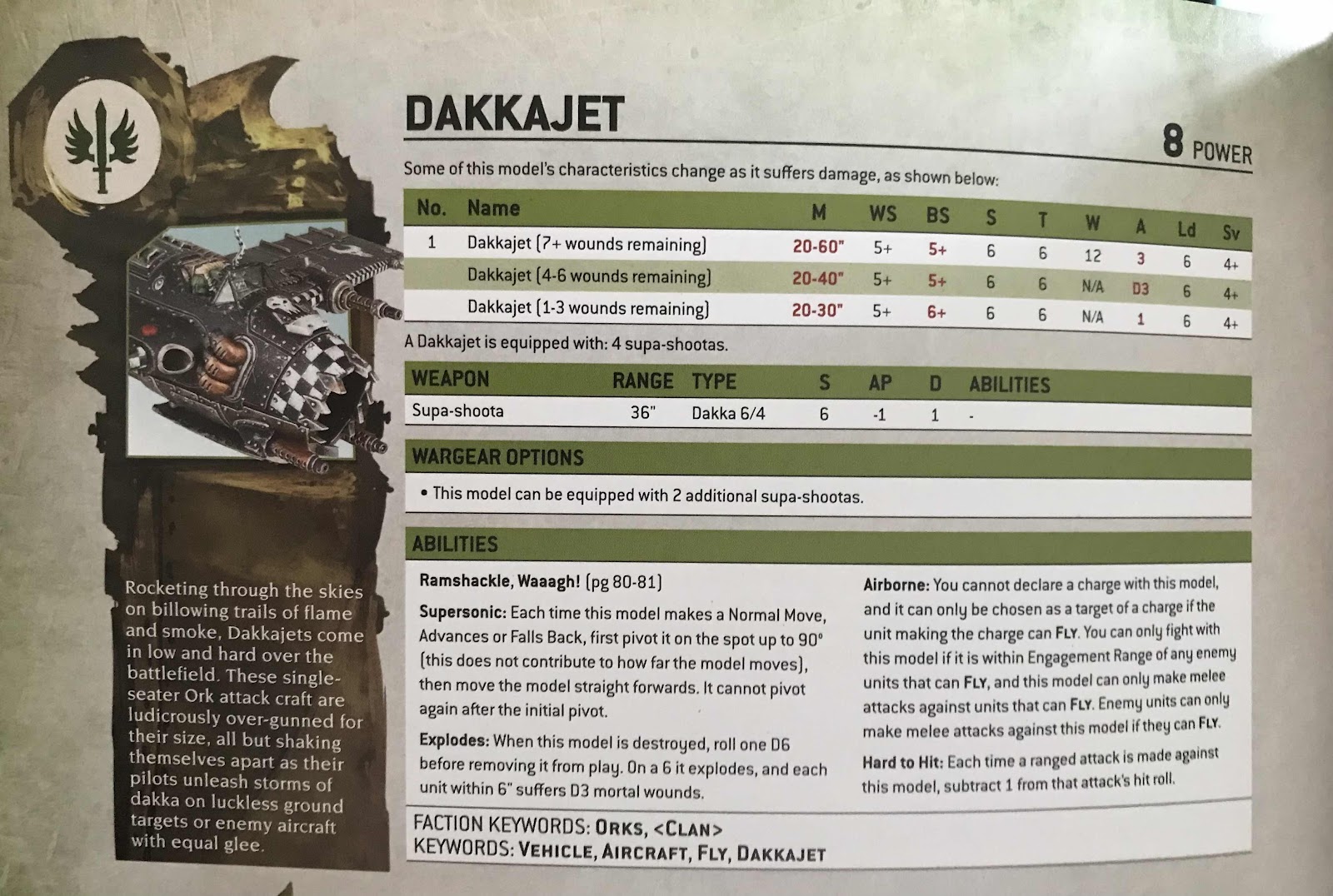 At just 120 points with six supa-shootas, it’s a brilliant distraction piece and if it’s ignored it will do plenty of damage within 18 inches.
At six shots on each supa-shoota at strength 6 and -1 rend you’ve got a powerful asset for targeting infantry or elite units.
It’s movement also gives them nowhere to hide on turn 1 as well. It’s an auto include for me but it always dies early, but in doing so it takes a lot of heat off of my other advancing units.
Points
Finally points wise I think they’ve done fairly well, the buggies are all cheap enough to be very useable now, the scrapjet gets a lot done for 90 points. The Rukkatrukk Squigbuggy also comes in at 90 points and with nitro squigs it still only reaches 115 points. 145 for the Best boss on Squigasaur is also a steal.
The unfortunate part is that the Morkanaut has gone up significantly to 380 due to having more wounds, however I don’t think it will see play anymore due to its increase. Without sparkly bits it’s just not good enough to make the cut.
Conclusion
Its a great book with lots of options for any kind of player. It’s also strong enough to compete without being obnoxious like the Mechanicus and Drukari books.
My only complaint is the one I mentioned about Ghazghkull earlier in the review but I’m really enjoying the list building process. I’ll be working on Warbikes and then some buggies to make my list more aggressive.
Long term though if I go to events I’d probably be looking towards Goffs for a powerful Ork list, there’s no denying they have the best allegiance abilities in the book bar the objective play that Deathskulls provide.
Motivating myself to paint said bikes is proving difficult though!
Thanks again for reading and to Games Workshop for sending us a copy of the book.
Aveinus Kaane
Posted by Aveinus at 19:06

Email ThisBlogThis!Share to TwitterShare to FacebookShare to Pinterest
Labels: Orks