Today we are going to be taking a look at the new Seraphon Battletome which has been out for a few weeks now. 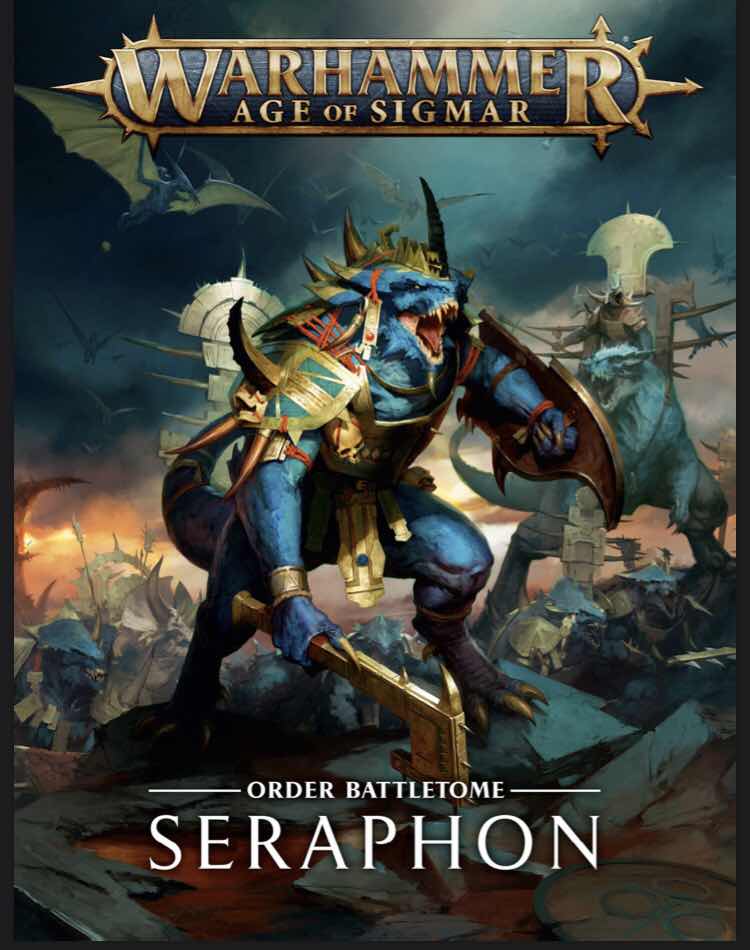 This is the second version of the Battletome for this popular army and brings them inline with the more recent standard of release including a lovely piece of terrain and the datacards. However, Seraphon fans will probably be a bit pieved at the lack of endless spells (more on this later) and, I may be wrong, but I can't see any dice! These seem like quite strange omissions as they are very popular areas of the collecting and gameplay of AoS... 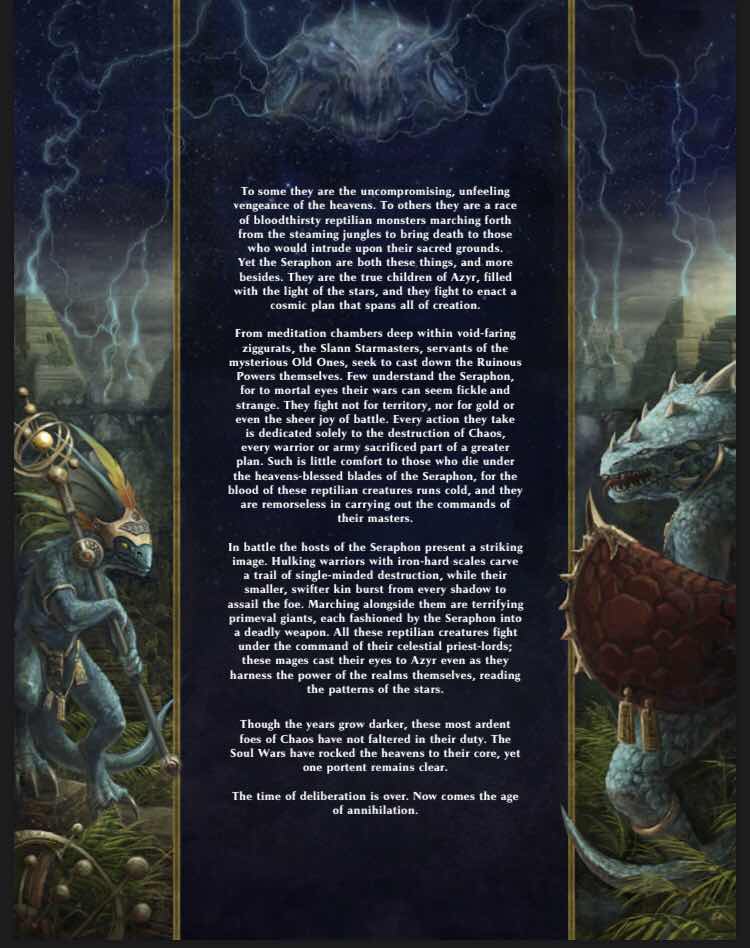 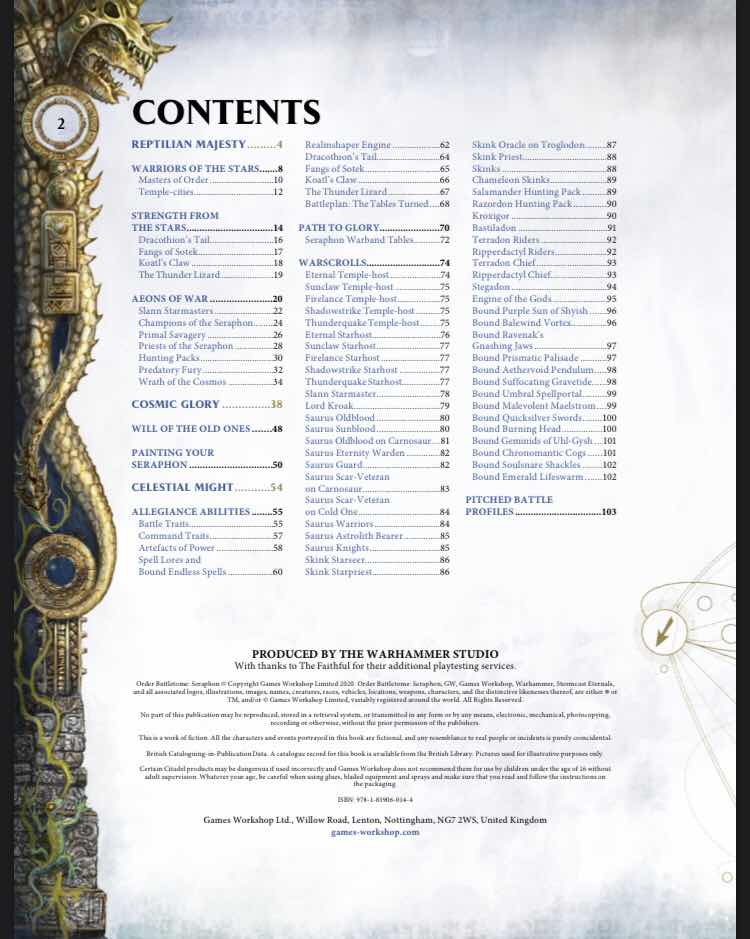 With a lack of new or updated kits, I feel that this release further misses the mark. The Cold one, Saurus and some of the other kits are so old and no longer fit with the GW quality. In fact, other companies have created some lovely lizardmen models that are superior to the current Seraphon line. In my opinion, as the Seraphon are a completely unchanged-aesthetically faction between AoS and WHFB, we may only see an update for them when The Old World is revisited - which is pretty clever from GW as it creates multiple avenues of sale.

Anyway, enough rambling! On with the review.

This Battletome has undone/modified one of the worst pieces of lore in the mortal realms, since AoS began - Seraphon are actually lizards again...sort of...Many gamers were very put out when the first Seraphon Battletome came out and one of the Realmgate War books confirmed (I forget which one) that the Lizardmen were no longer beings of flesh and blood, but were now celestial bodies of light that could beam down onto the foe. A lot of players didn't like this. I didn't like this and I wasn't even a player. However, you now have the option of your army being from Azyr (or the starships which float far above Azyr) or having settled in one of the realms as flesh and blood beings called the coelesced. These are more tribal warbands and no longer dwell in the temple ships, instead settling in jungles much more akin to their fluff from the Old World. For me, it is great that the option is now there for either lore follower. 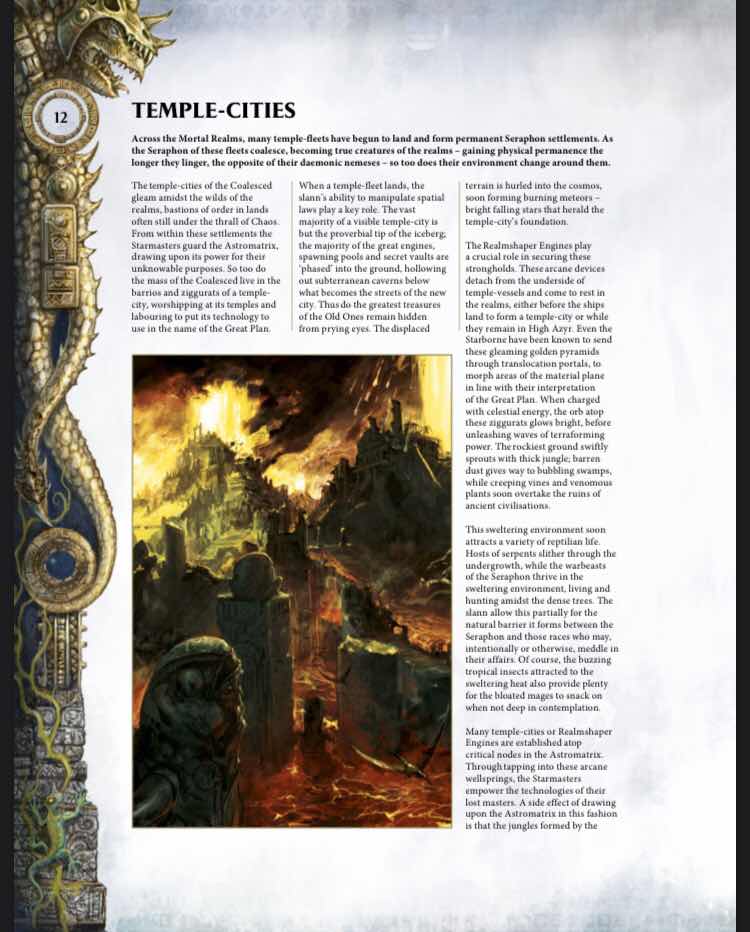 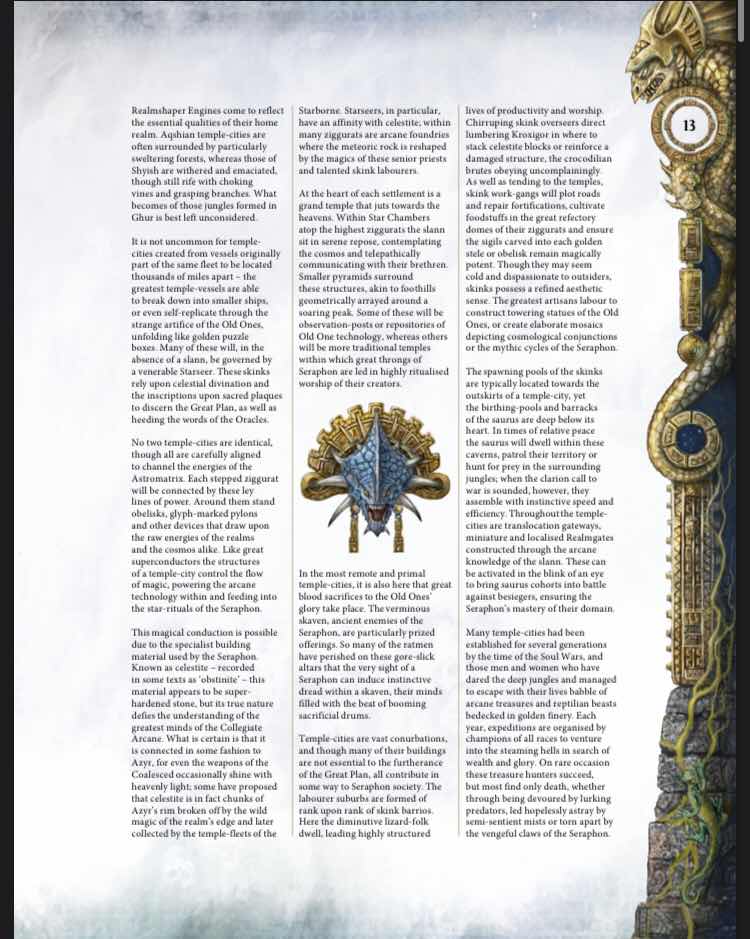 So as discussed above, we now have 2 types of Seraphon - the Celestial and the Coalesced kinds. When creating your army you can choose which type your army is. The Celestial Seraphon play a bit like they used to, with teleporting and summoning, whereas the Coalesced play a bit more aggressively. The Coalesced enjoy an extra attack with their jaw weapons as well as reducing damage of incoming attacks. This is quite a nice buff for the army and can be further enhanced by choosing one of the various sub-faction rules to really let your Seraphon play to the style you like. For me, this is a really neat way to differentiate the between the two forms they can take and it looks like they will both play well, but also very differently. As always, I can't tell you how competitive either of these armies will be as that isn't my style of play. From a narrative approach however, I think that both forms are really cool. 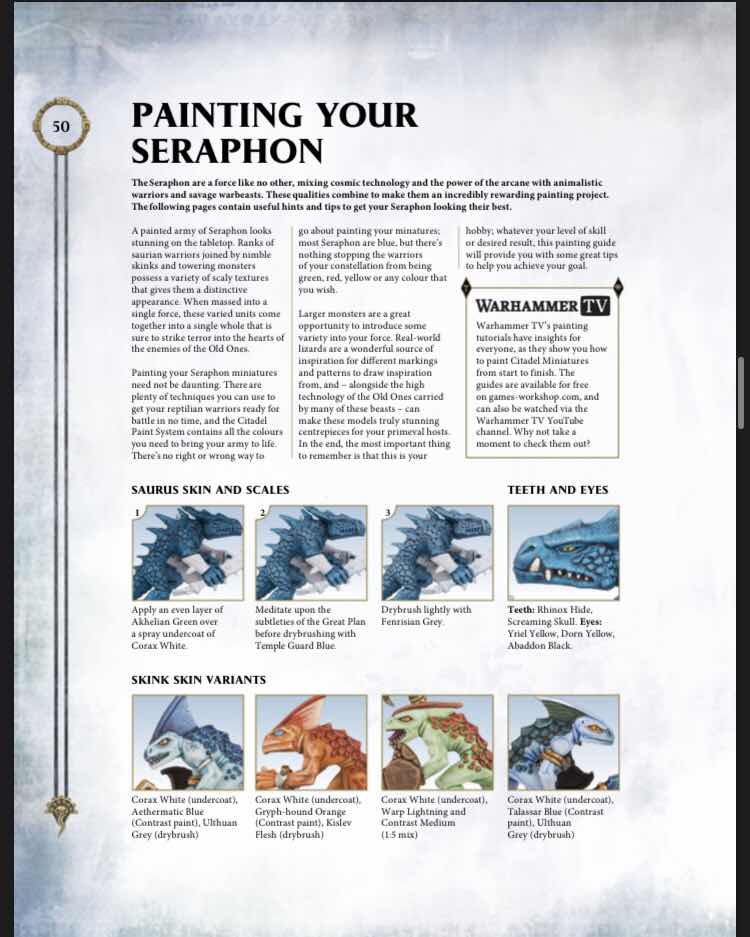 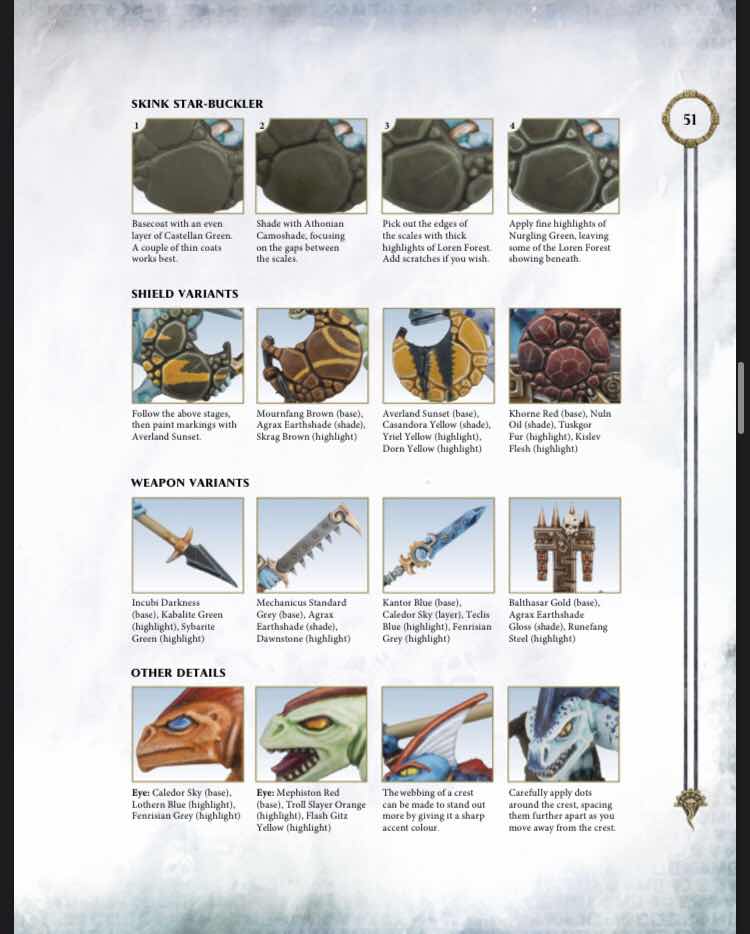 Instead of gaining their own endless spells (which I find very strange for an army which is known for how magic they are) the Seraphon can use some of the ones that are available already, but can modify their behaviour. While this is quite cool, I still think that they deserved their own spells. 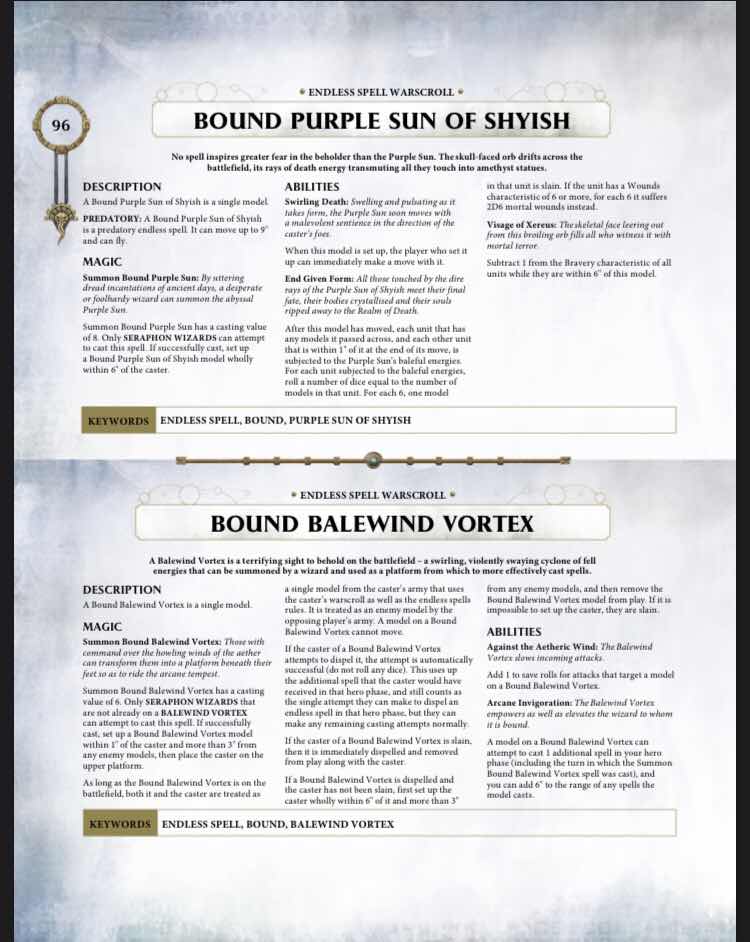 In the conclusion I want to take a look at the release as a whole and not just at the book (which on its own is very cool). For me, it feels like GW doesn't know what to do with the faction and the announcement of WHFB being remade has potentially hamstrung the Seraphon from getting any love. I can understand this to a degree - as a company they probably didn't forecast the popularity of WHFB and the interest that would be generated from the Total War games. Seraphon were also a tough army to incorporate in the transition from the Old World to Age of Sigmar. Seraphon players would, in my opinion, be justified in feeling a bit disappointed in the release although it is a step in the right direction. For now, I feel the faction is in limbo until the Old World is revisited.

Let me know your own thoughts and feelings on the Seraphon below. Please ask any questions, I get a lot of emails from readers and comments here are more likely to be responded to than via email - although I will always respond when I can.