Hi all
Today I am going to be having a bit of a look at the new Beasts of Chaos Battletome. 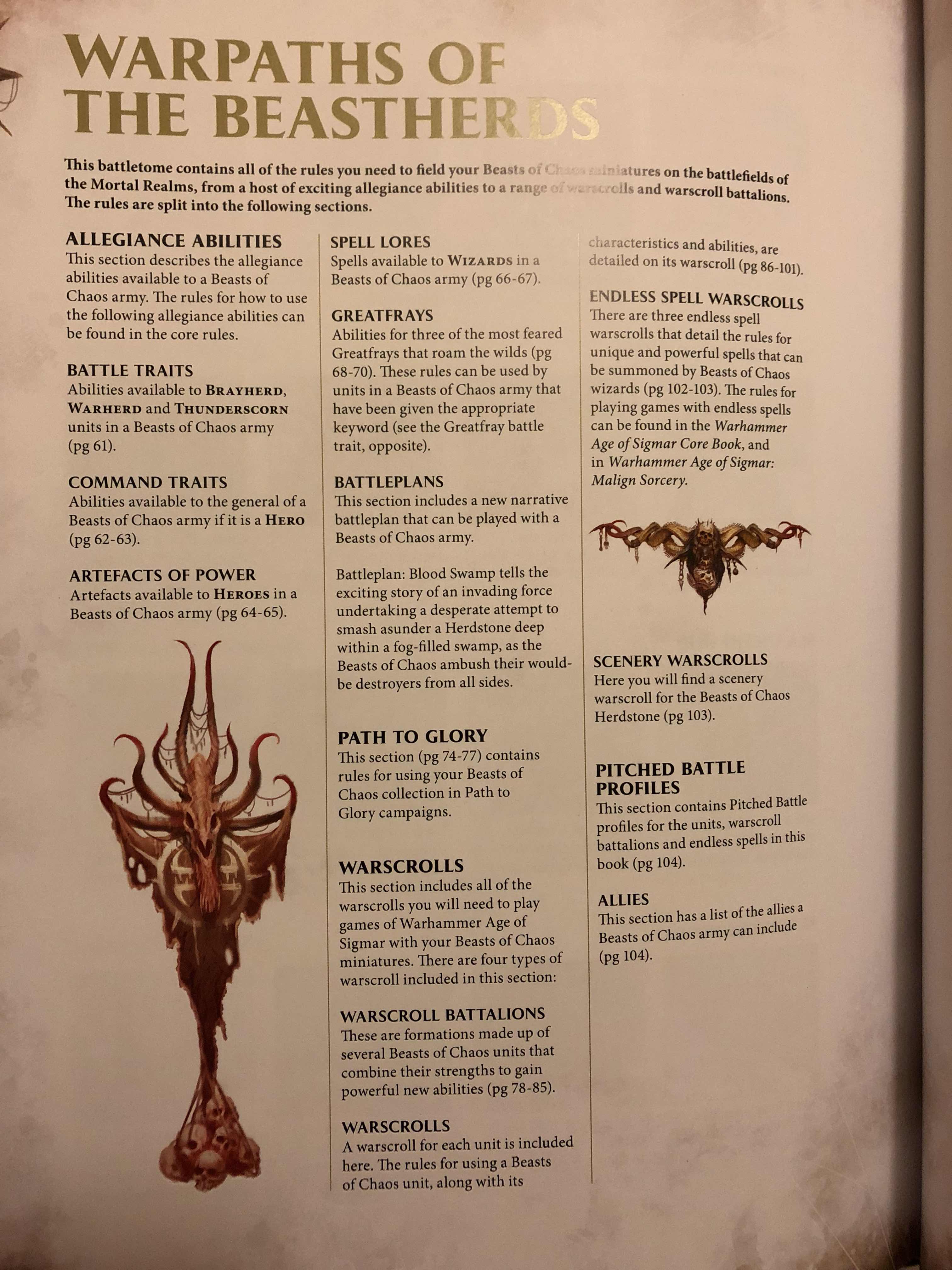 Beastmen are an army that I have always wanted to do dating back to Warhammer Fantasy. A mixture of having no friends who played WHFB and a fundamental dislike towards the style of the old game, it just never seemed to happen. I did, however, have the old army book and I really liked some of the dark, harrowing and psychological horror that surrounded the faction. Rapey goatmen are indeed towards the boundary of what is acceptable in a dark fantasy setting. 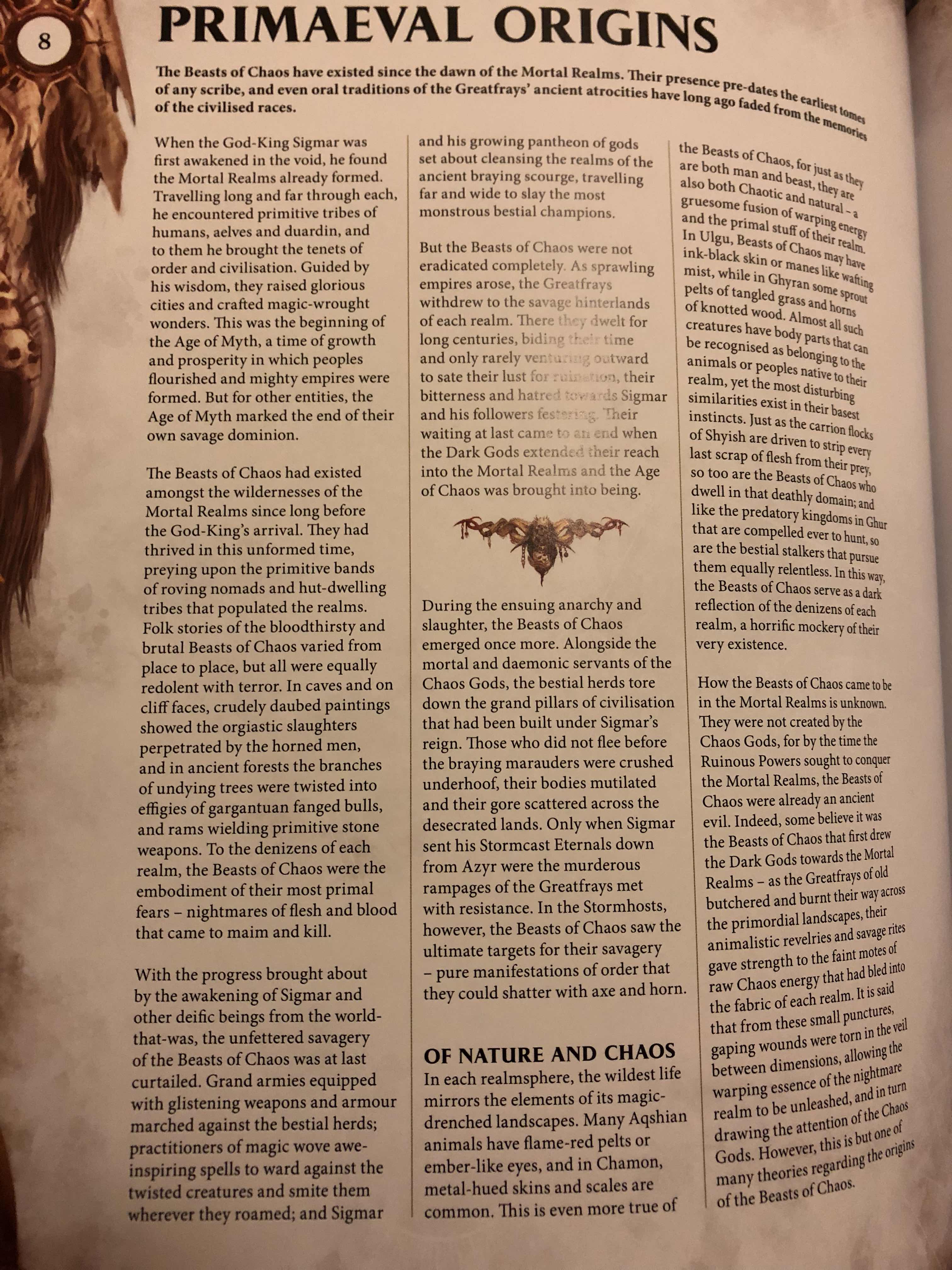 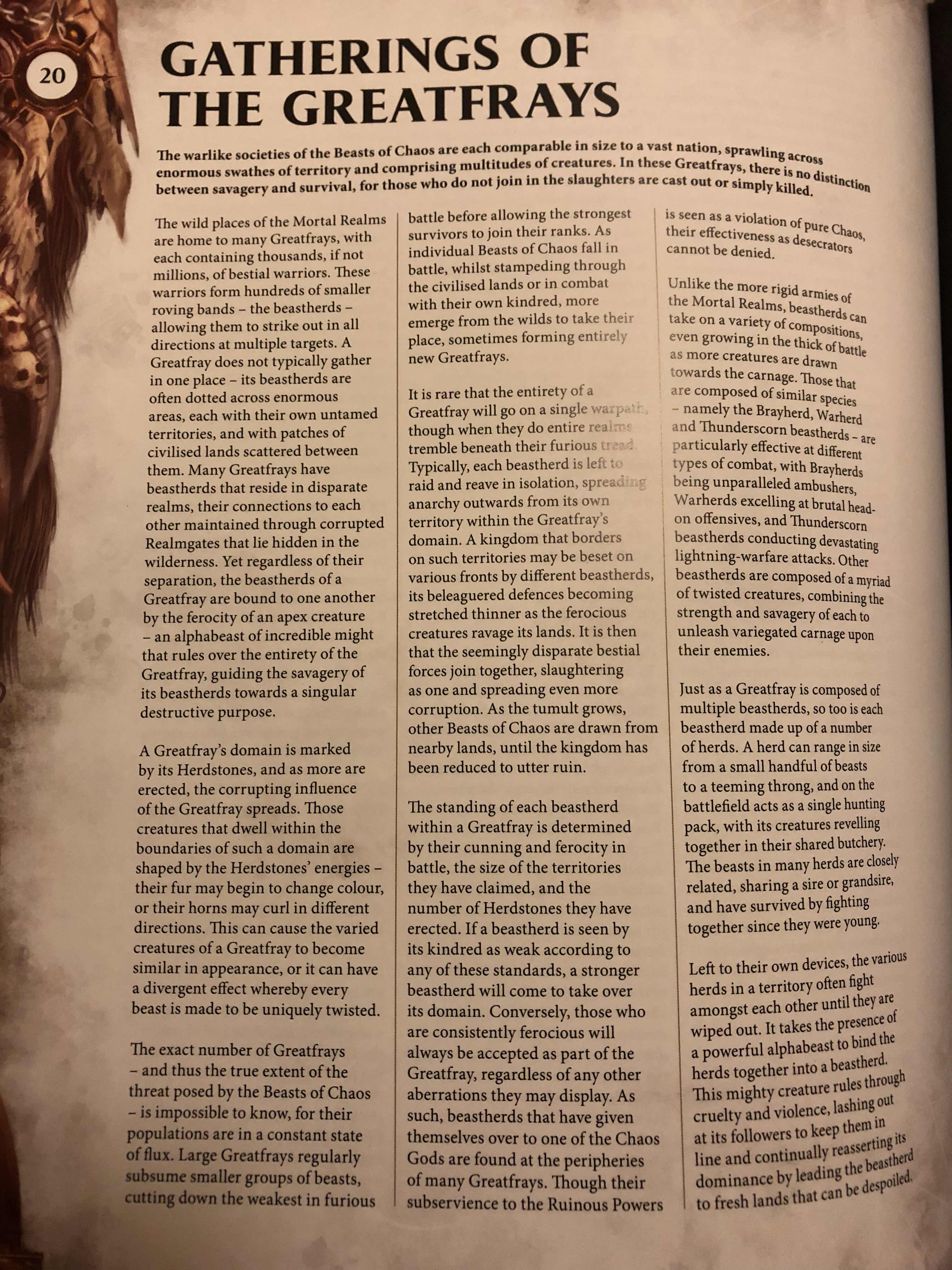 So, enough looking at the past fluff and let's start this review by looking at the new! The Beasts of Chaos are described as having pre-dated the records of the realms. It is actually unknown as to where they came from or how they were created. They now just set up in massive warherds and roam the realms. It is stated that in between all the major settlements, Beasts of Chaos are the standard wilderness faction that you would come across.
At this point it is clear to see what the army is able to field so let’s have a look at some of the allegiance options. When creating your Beasts of Chaos army you can select from 1 of 3 major ‘Greatfrays’. 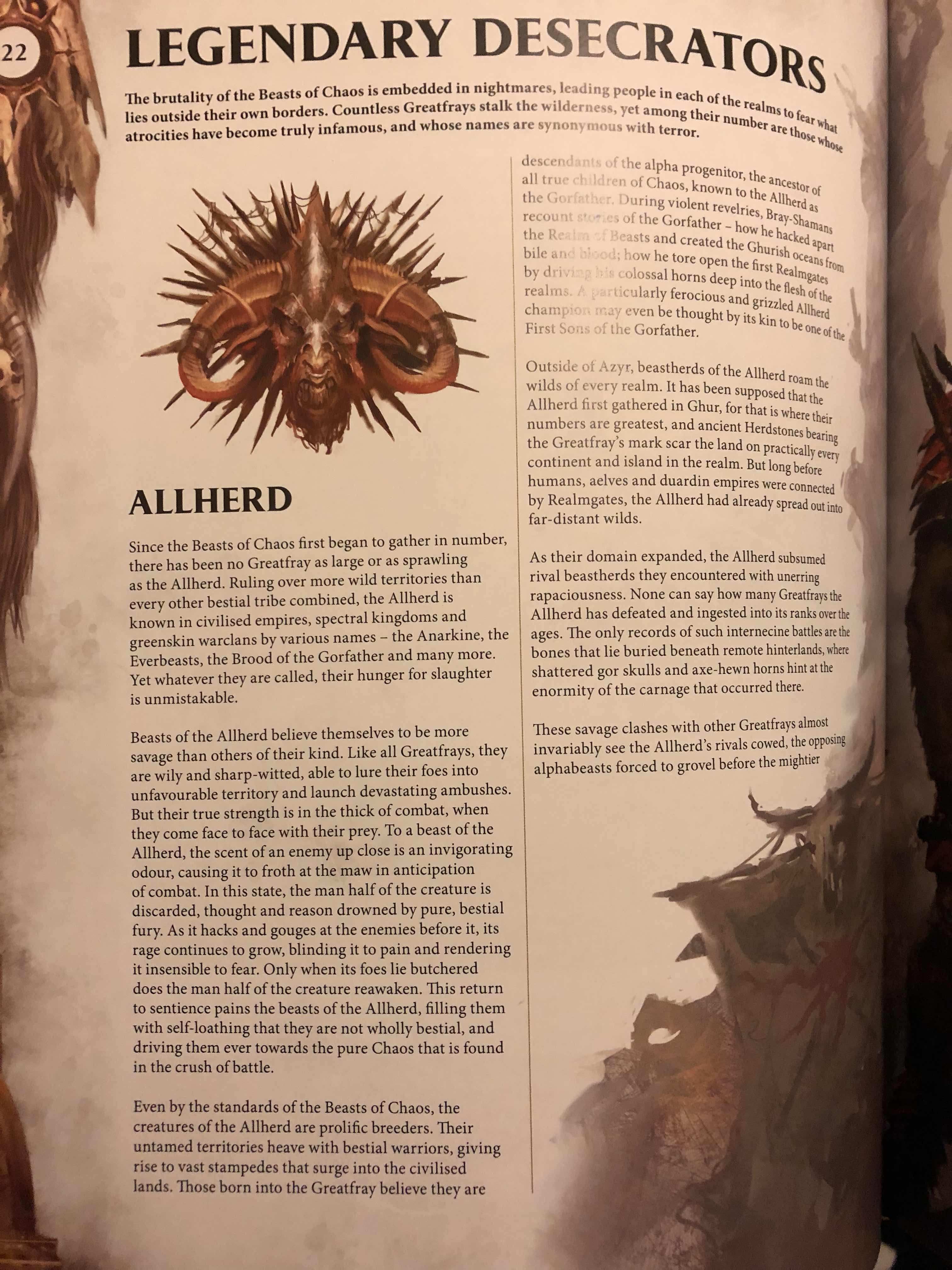 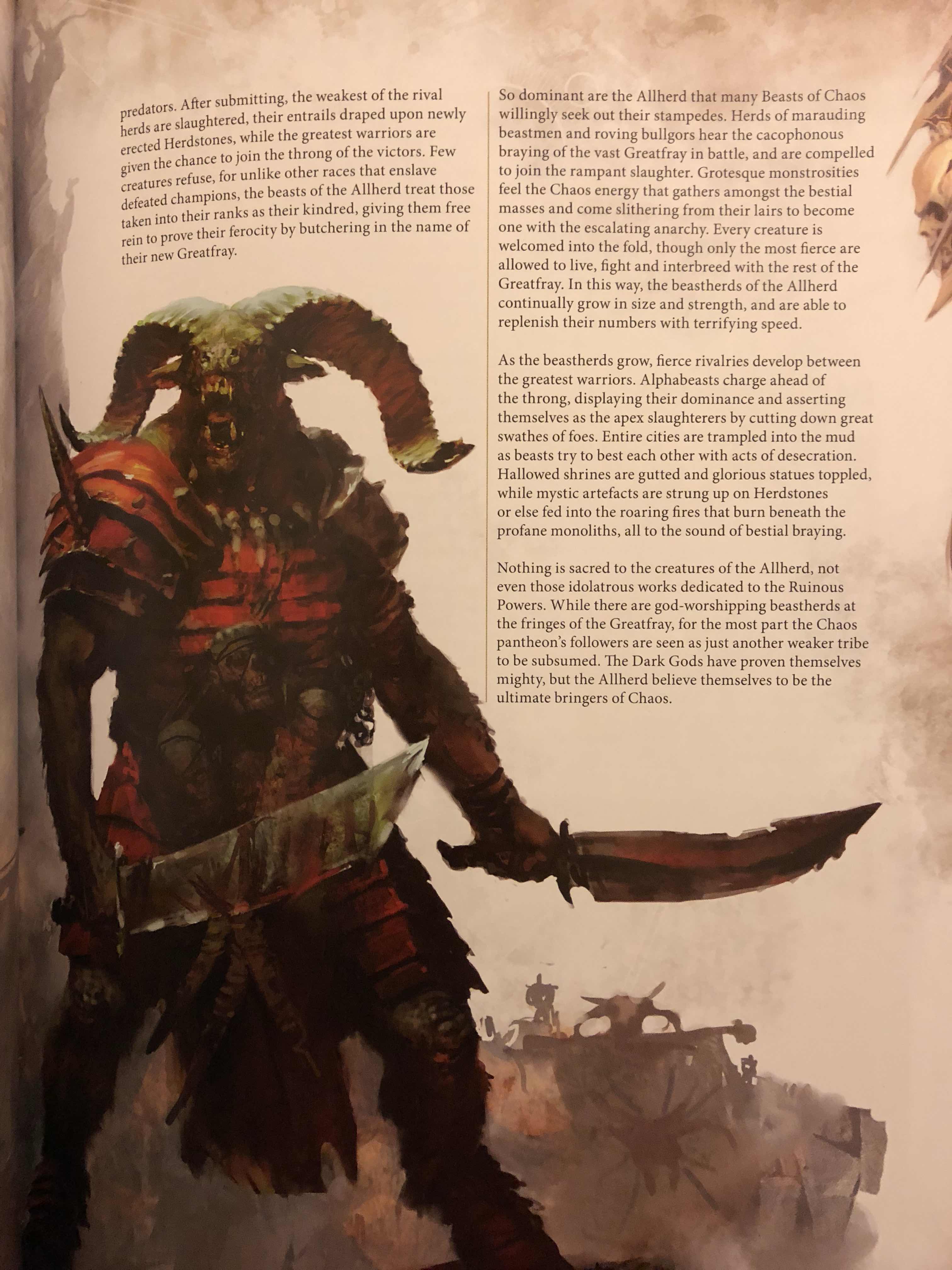 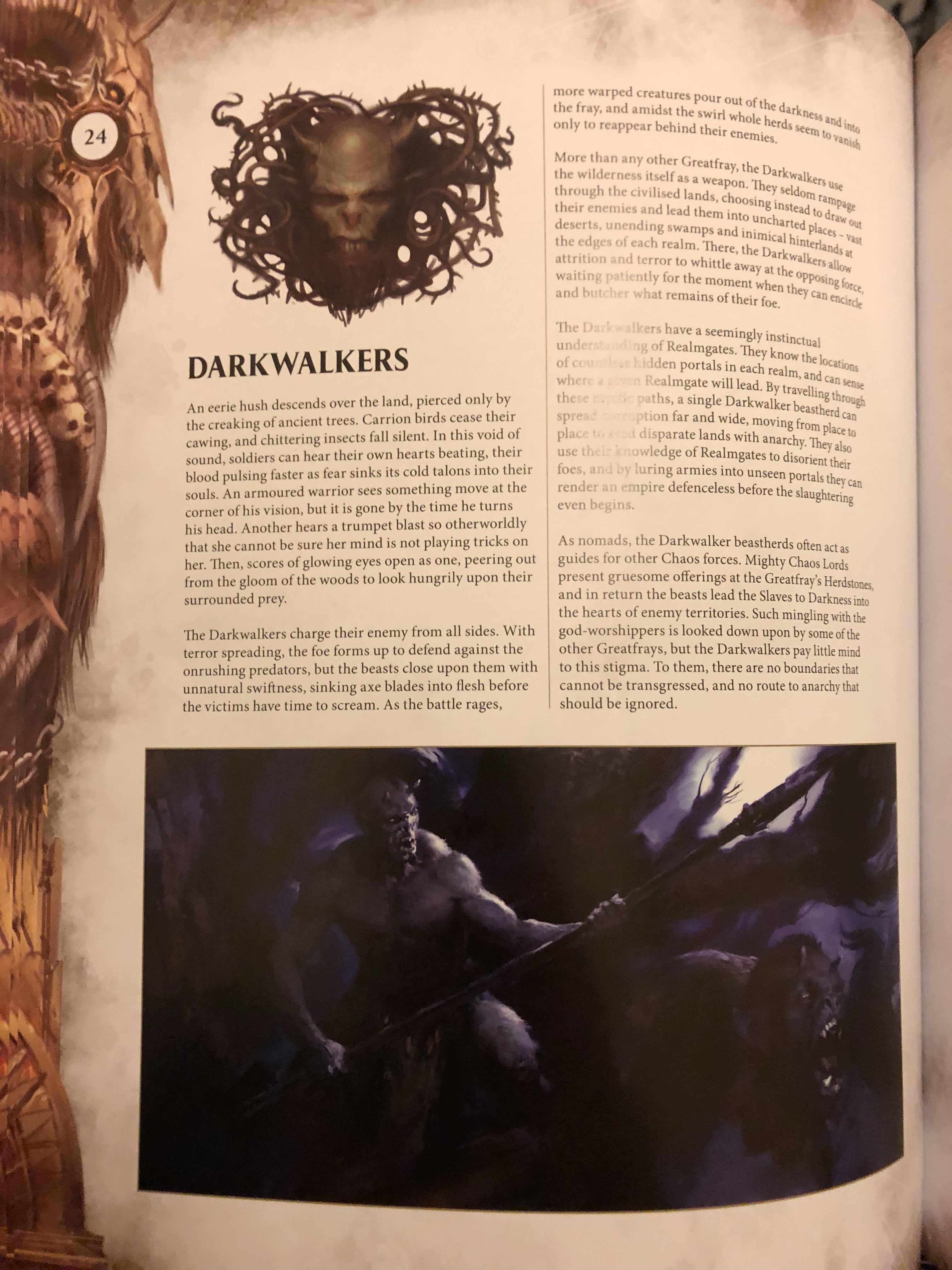 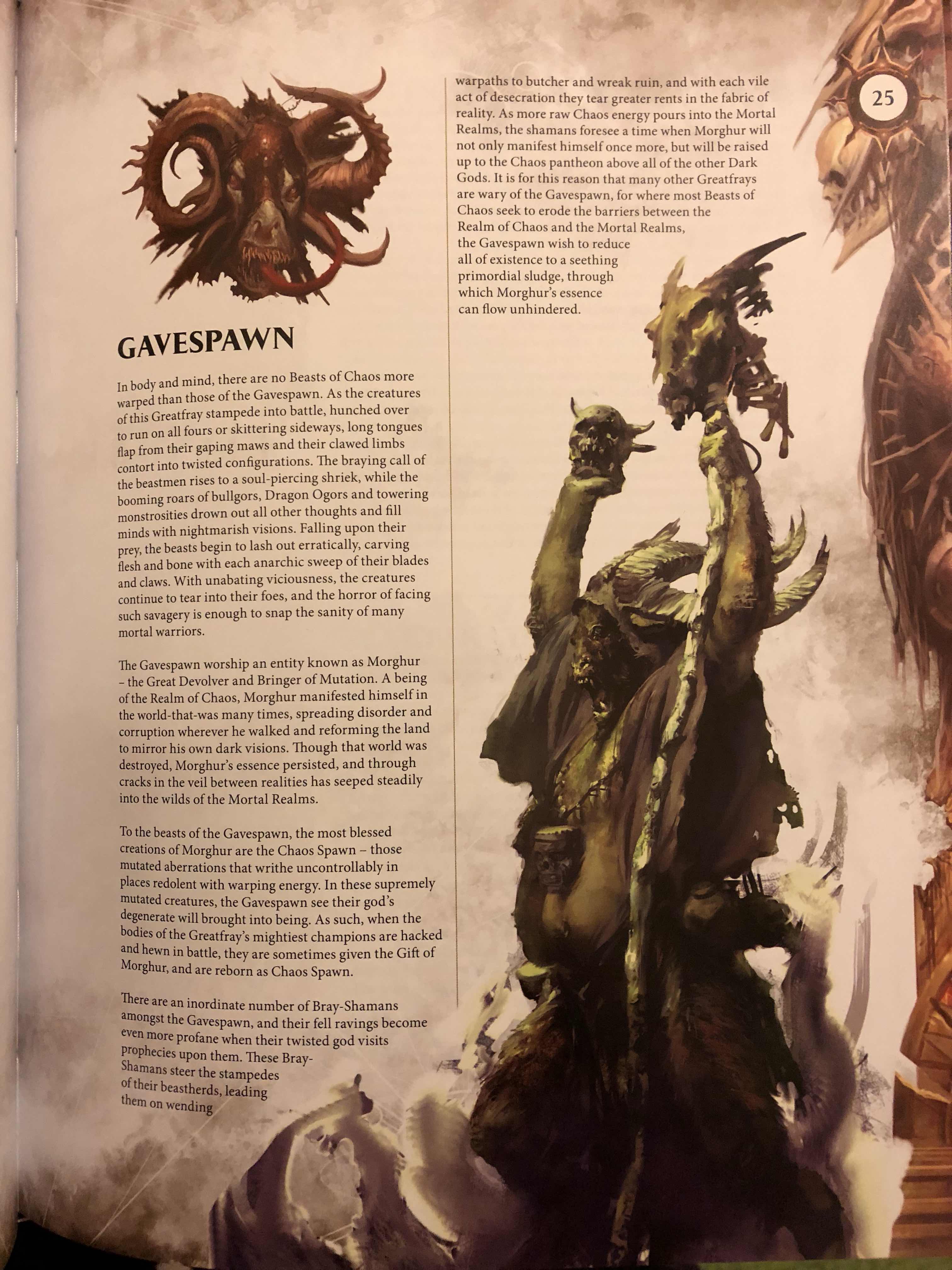 These have their own individual styles of play and bonus. They each come with command abilities and army-wide buffs that change the make up of the whole force. These can also be tied in with various battalions to create a really custom force if your own choosing. It is worth noting that there are battalions aligned to each of the Chaos gods and although I am disappointed at the lack of Khornegors, Pestigors and Slaangors, it is nice that you could effectively create a ‘poor-mans’ version of them with these battalions. 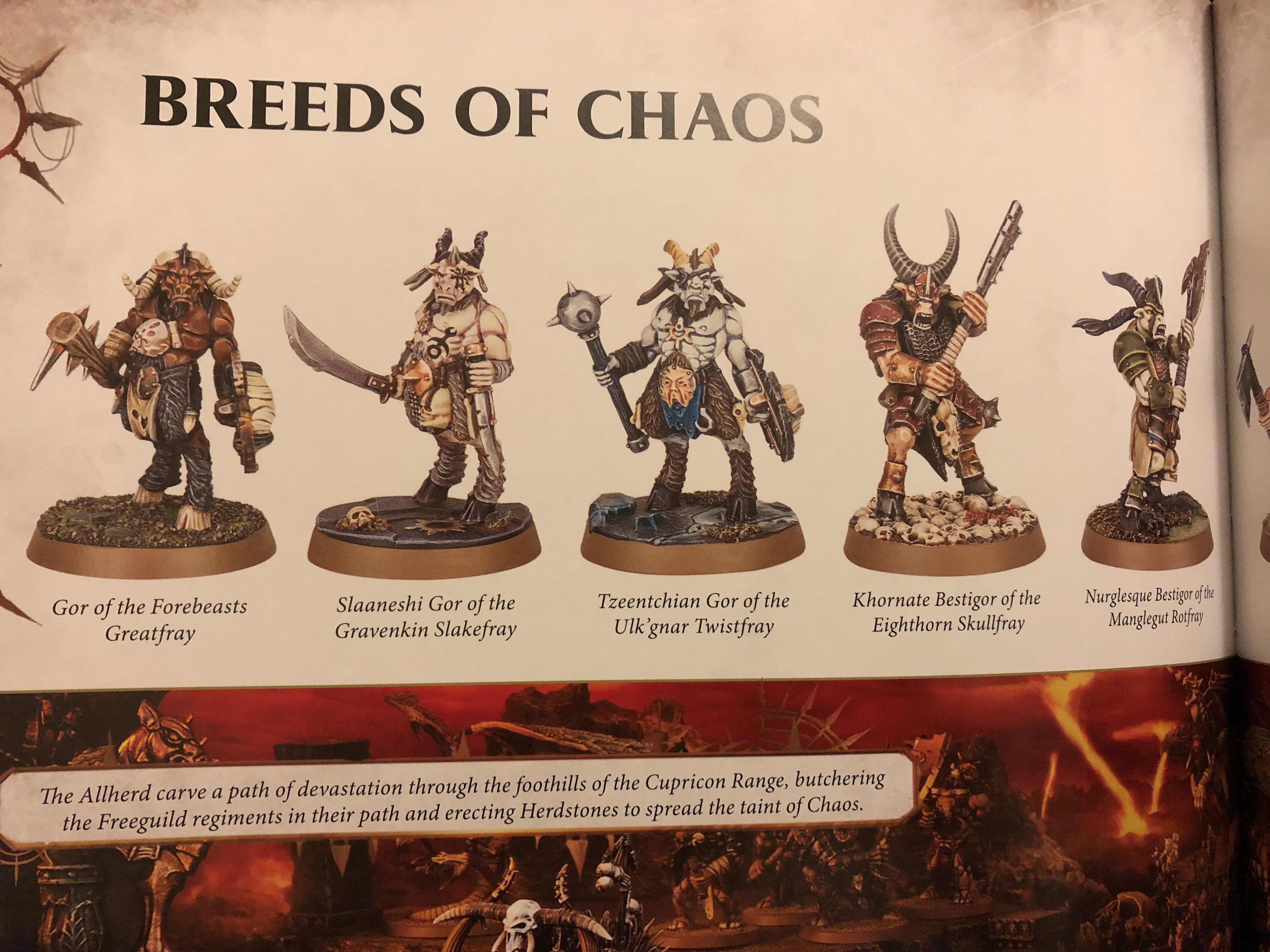 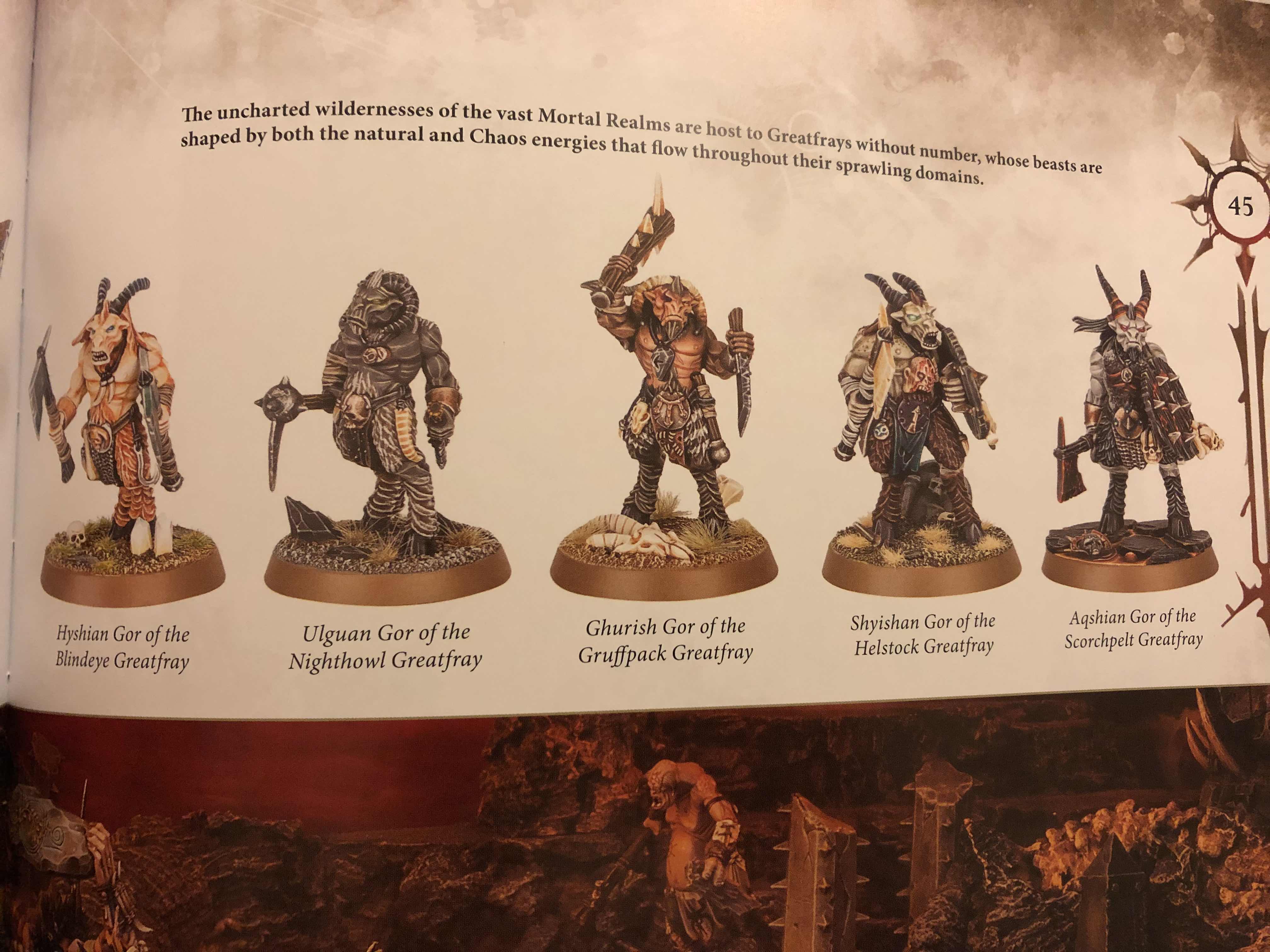 Aside from that minor criticism (no new models) my only other one is that, for me, there is too much going on in this book. Too many monsters, too many units that feel like they would never get chosen unless to fulfil your particular army style. Core Tzaangors are better than Ungors and Gors. Enlightened make Bestigors look unusable and Skyfires make the Ungor raiders look like kids with straws and spitballs! There are around a handful of big monsters that are potential centrepieces (except ruleswise) and then there are the Thunderscorn too...for me, Beastmen should have been kept separate from Beasts of Chaos and have a new multiparty Gor kit that could have built the 3 missing types too. It feels like they have just tried to shoe-horn as many old models into a viable book. 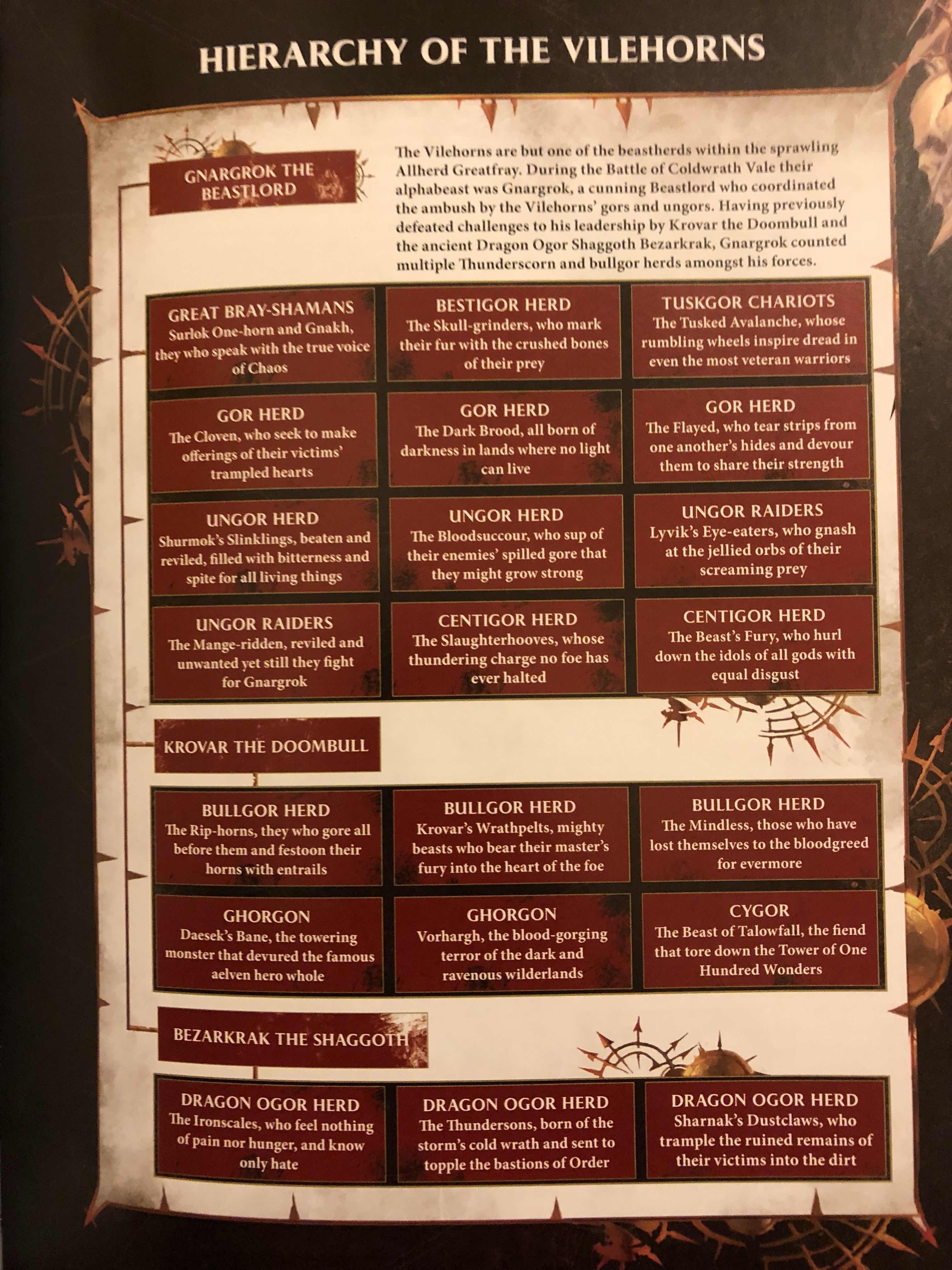 In spite of this I can’t help but find a lot to like about the book if I just ignore 1/2 the warscrolls and I am already working through an army which will feel more like Beastmen and less like Beasts of Chaos. I shall keep my fingers crossed for Khornegors, Pestigors and Slaangors in the future but for now I am content to be able to build a nice army and develop some fluff. Stay tuned for a skirmish campaign starting in December between the Dispossessed and Beastmen - once I have finally moved home!
I will also be showing my army progress so far over the coming weeks.
I hope you have enjoyed my review.
Stay fluffy
Kaelo!
Posted by Kaelo Rylanus at 21:31