We have been lucky enough to receive a review copy of the Adeptus Titanicus ruleset and a Warlord titan! The first thing I want to state is that, in my opinion, AT is a very, very good game and my only real gripe with the product is more about what it isn’t instead of what it is. It is a complex, tactical game with beautiful models and great terrain. It is a game with which you will be able to replay some of your favourite Titan battles from a compelling background set during the Horus Heresy. You could pick it up and play against a friend with some chips and dips and have a great time. But, unfortunately for me, it isn’t Epic. If you are a fan of Titans, robot vs robot or you have already purchased AT then there is probably no need for you to read on lol. 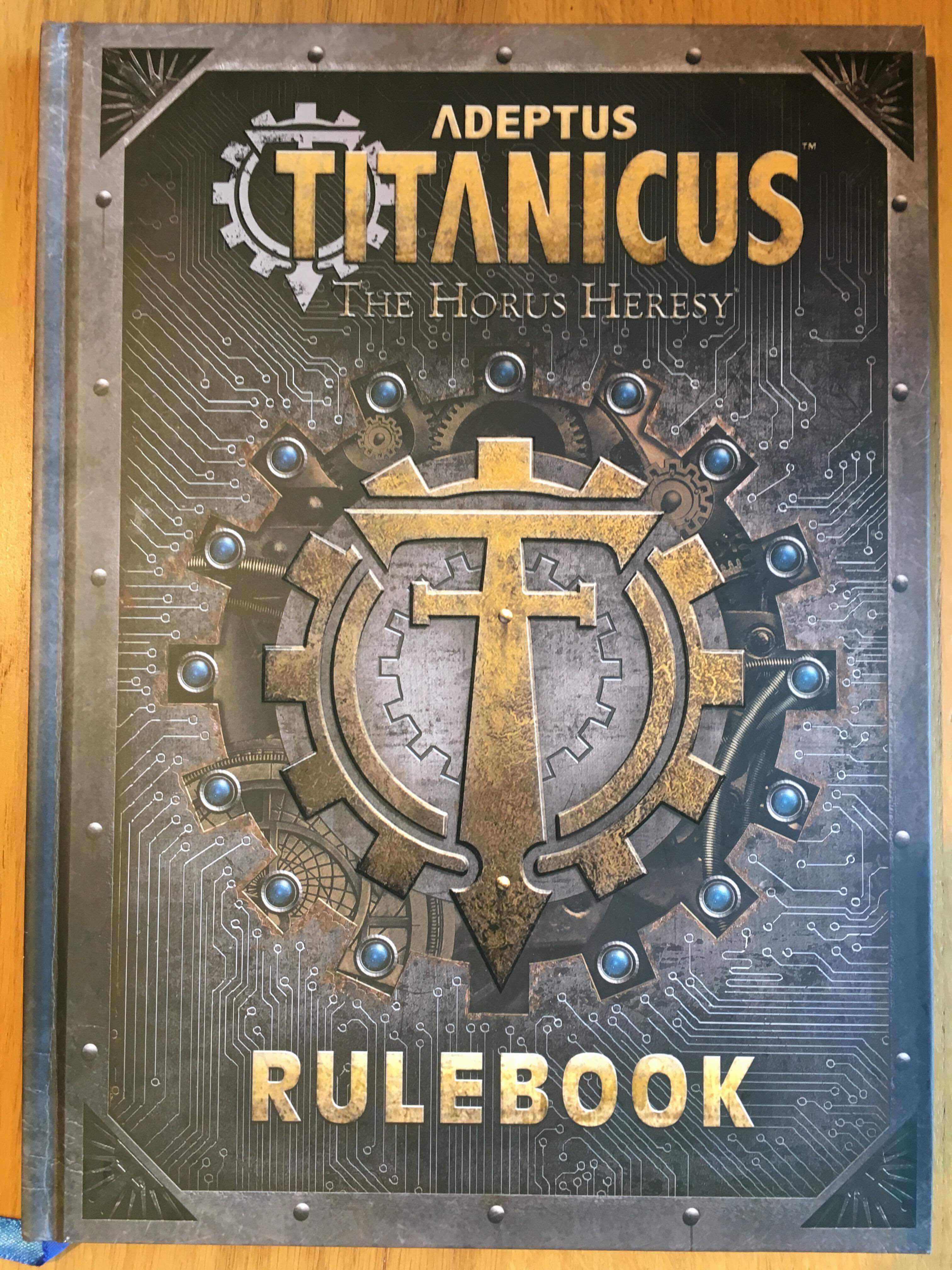 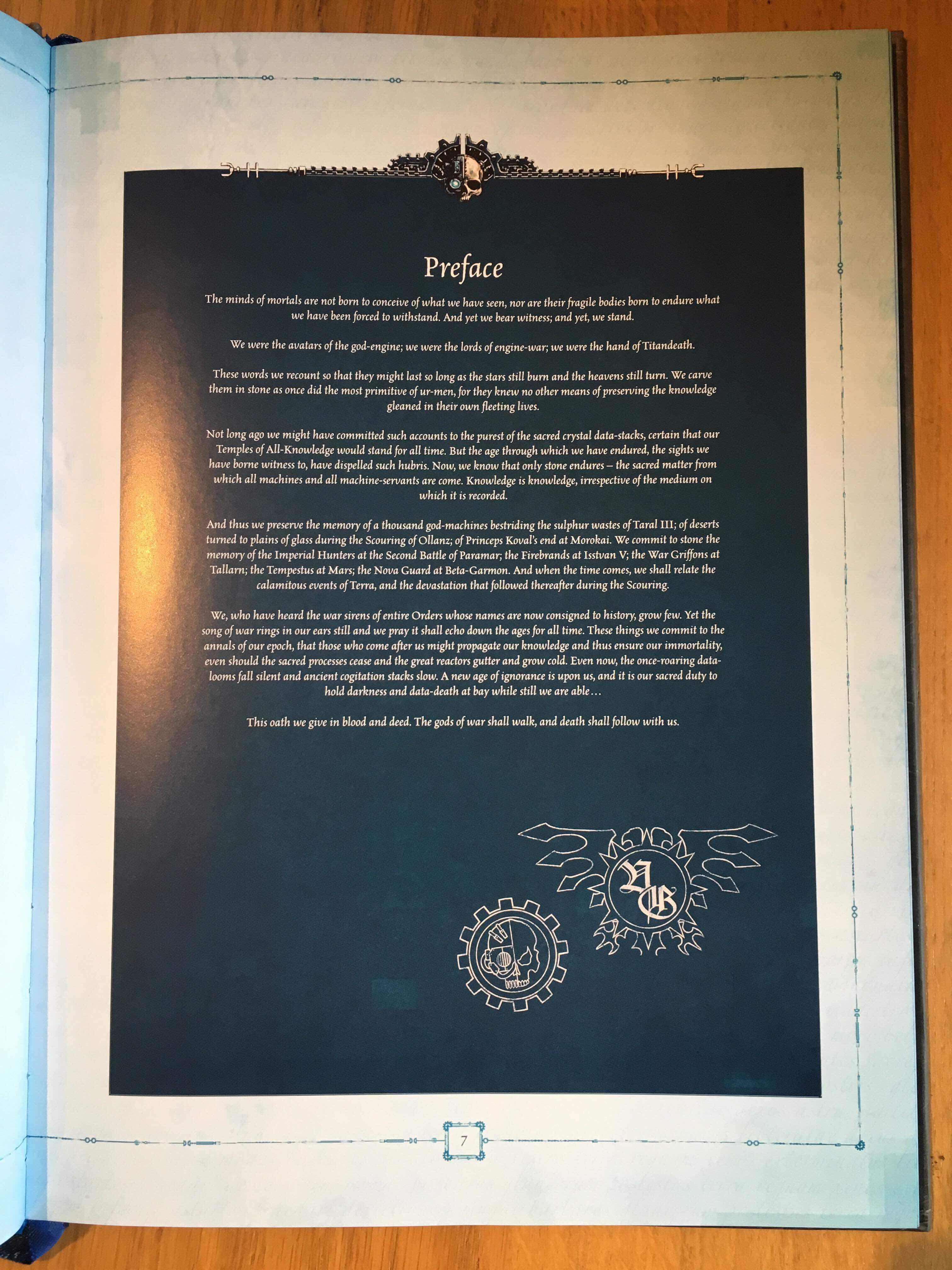 So, let us start by discussing the rulebook. As with all Games Workshop and Forge World publications, the quality is exceptional. Every page is full of rules, battle plans, fluff and artwork. 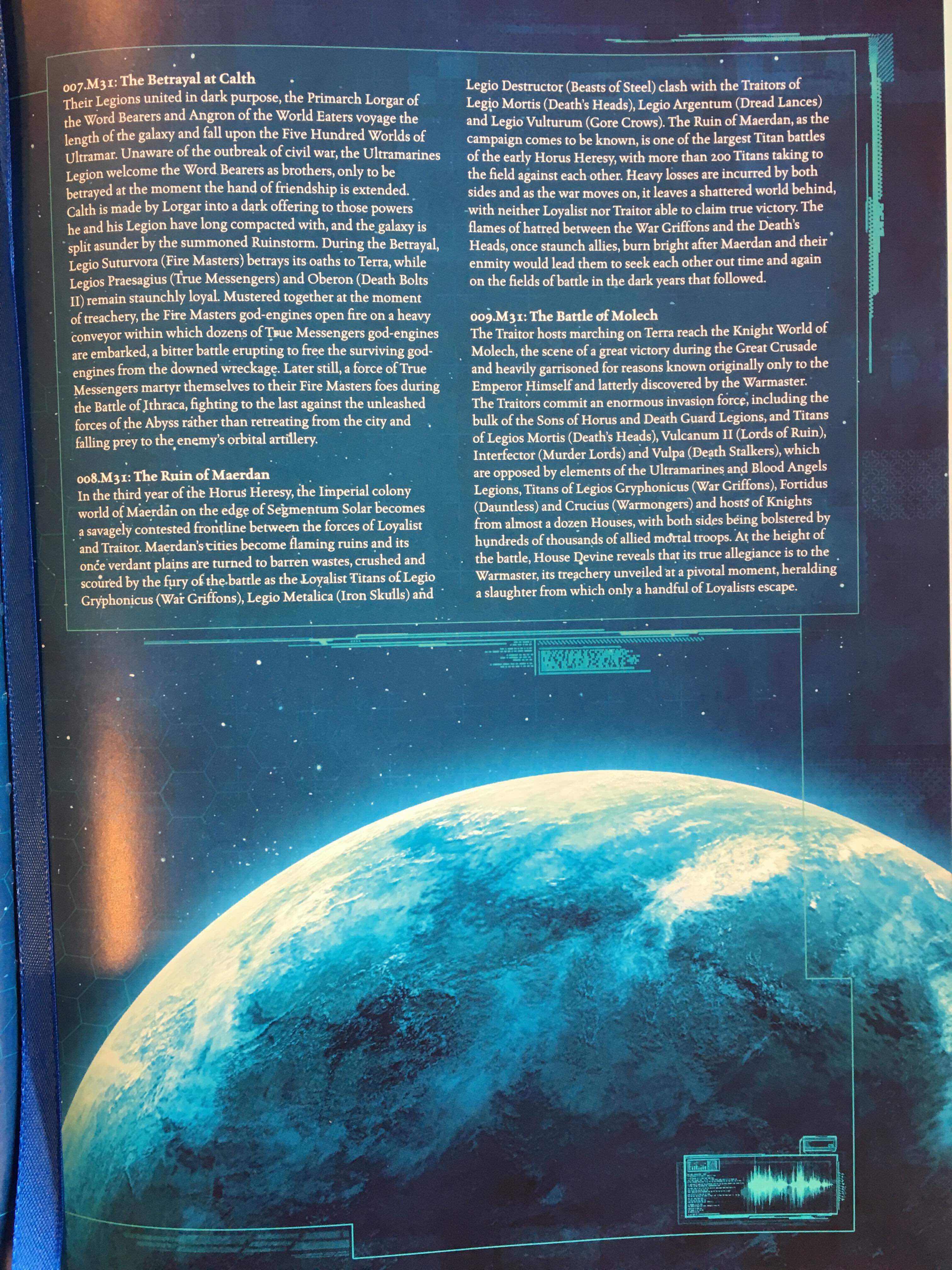 If you know very little about the Horus Heresy, then it gives you a taste without overwhelming you too much. For everyone else, its more of an expanded knowledge style of writing. There are battle plans for a few of the bigger Titan battles like Calth and the Battle for Magma City. The rules are well written and explained with nice pictures to help where needed. 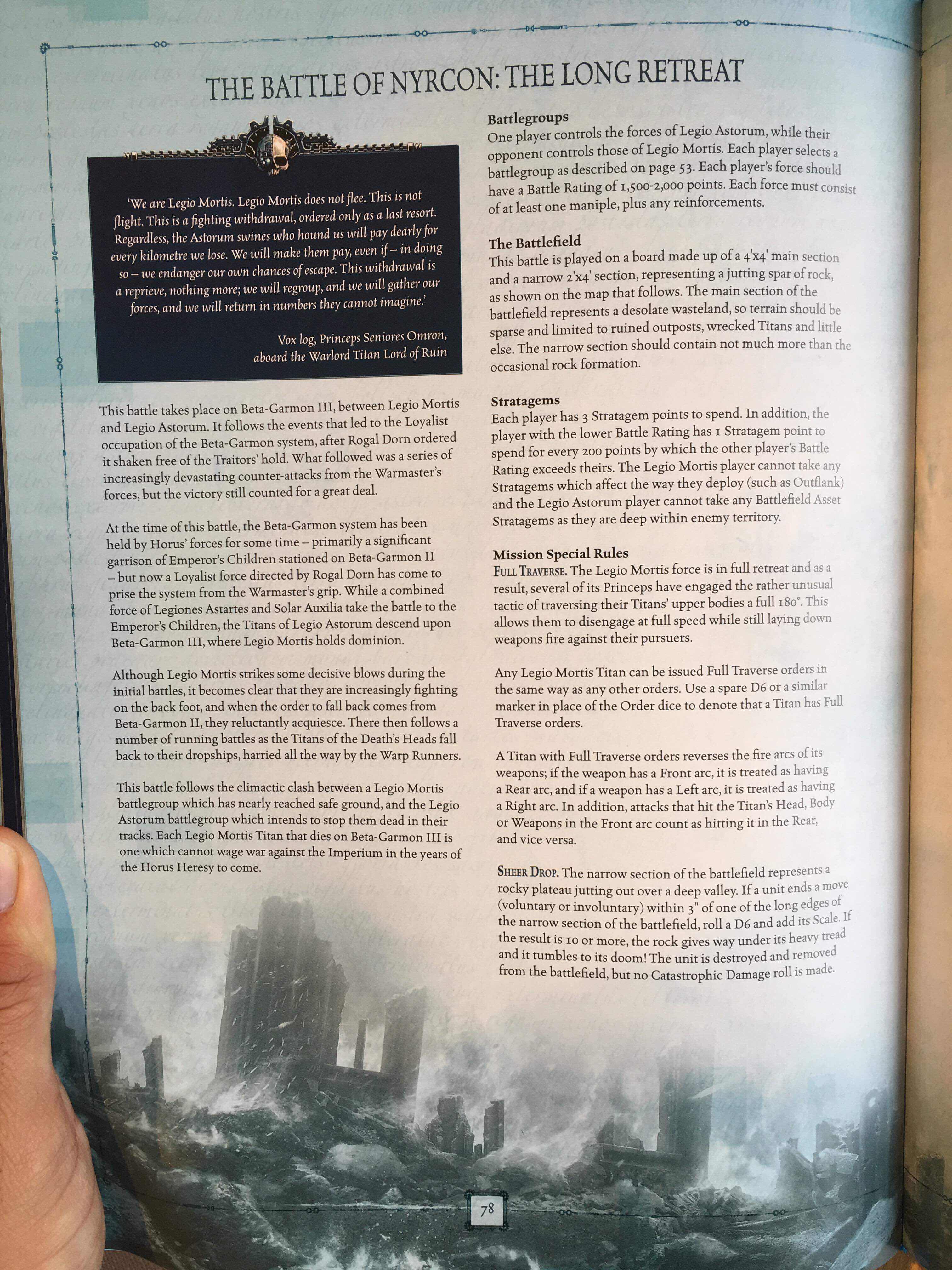 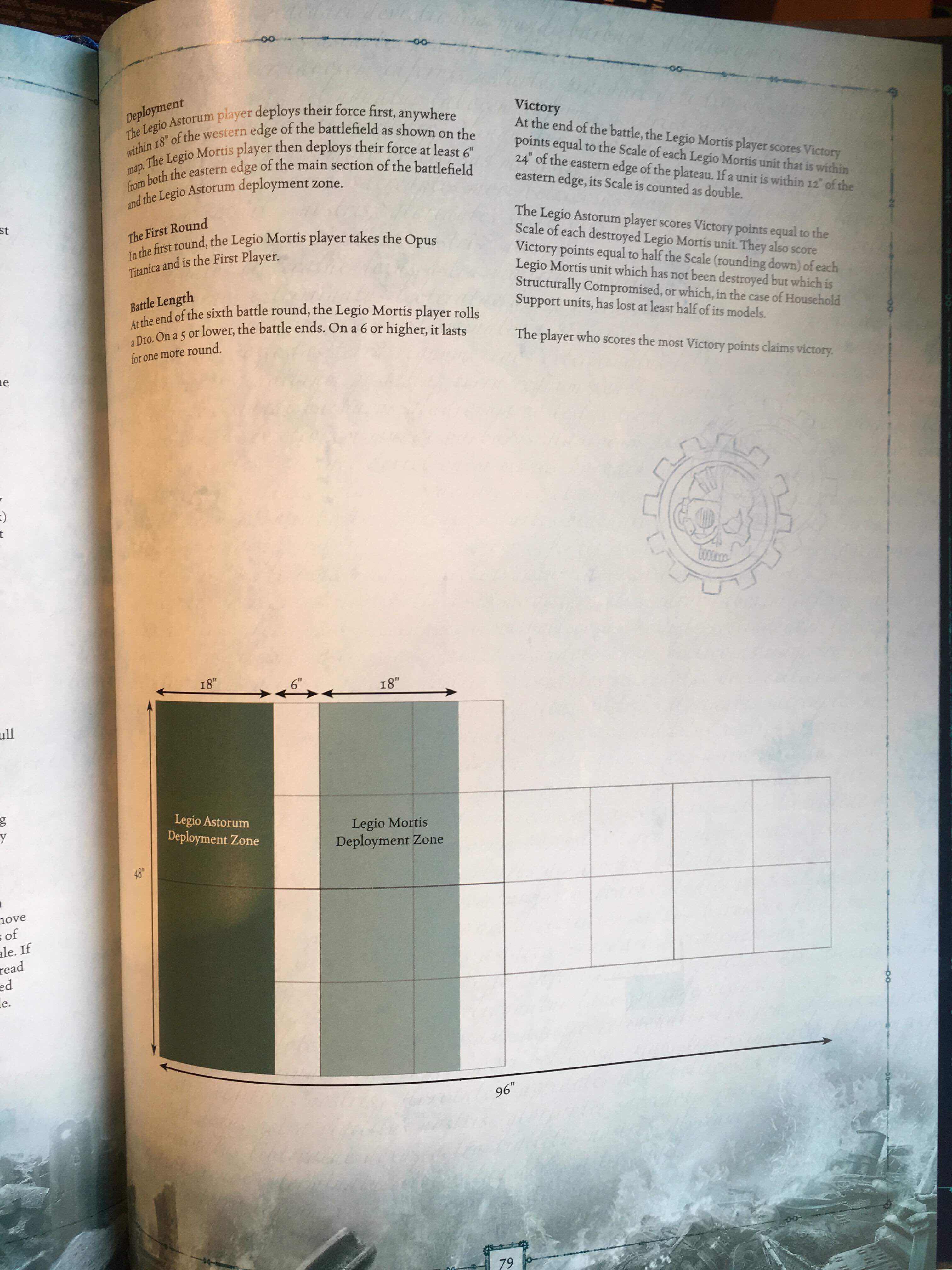 The game itself is played over various phases that make up the entire battle. It’s worth mentioning at this point that Adeptus Titanicus features an alternating action structure, where after initiative is decided the player who wins gets to choose whether they go first or second. The first phase is the Strategy Phase, and this is where both players roll off for initiative and the victor can enact various orders like get a free shooting activation in lieu of movement, or a more efficient repair protocol allowing you to vent your plasma generators. These skills and strategies can make or break your game and you have to really think hard about how it will affect the rest of your turn. There is no point shooting in the movement phase if your opponent has the opportunity to move out of your firing arc. Once both players have chosen their orders (or not) then it is time to head to the movement phase. 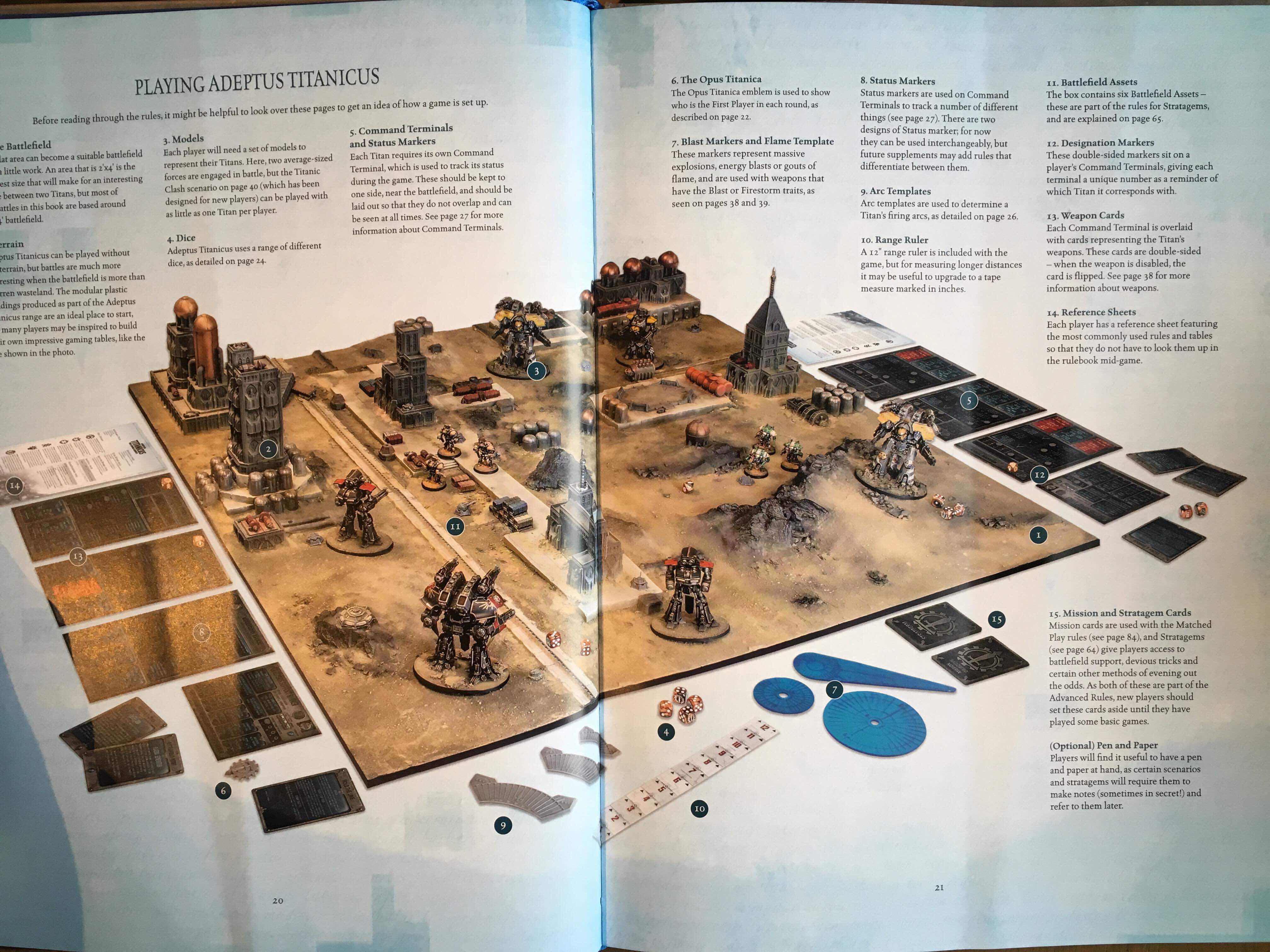 As befits these mighty engines of war, the movement phase is clunky without feeling heavy and awkward. Please bare in mind that I have only played with Warlord titans at this point. I really enjoyed the movement in the game as each pivot or inch you move can be countered if you don’t plan effectively. Players can choose to move their engine at a higher speed, but this results in a roll on the plasma reactor table which can mean that the engine can become closer to overheating. Once the first player completes the move for their selected engine, we switch over to the opponent and they get a chance to move with an engine. Both players take it in turns until all engines have completed a move.

The next phase is for damage control. You have two goals in this phase, the first of which is to get your Servitor Clades to repair damage already sustained to your engine. This is done by rolling a number of D6 depending on how many clades you have (the bigger the engine the more you have) and allocating these to various repair work with 4+ being the target number. A 5 or 6 could be used to restore a void shield (6 if they have all blown) or a 4+ can be used to vent the reactor. This leads us to the second stage. While it is important to repair damage, it is nigh on essential to vent the reactor. In my first game I took no damage but still lost because my reactor blew due to poor engine management. Its this tactical depth that really separates it from different games as it creates choices that can make or break the game without shooting or combat! 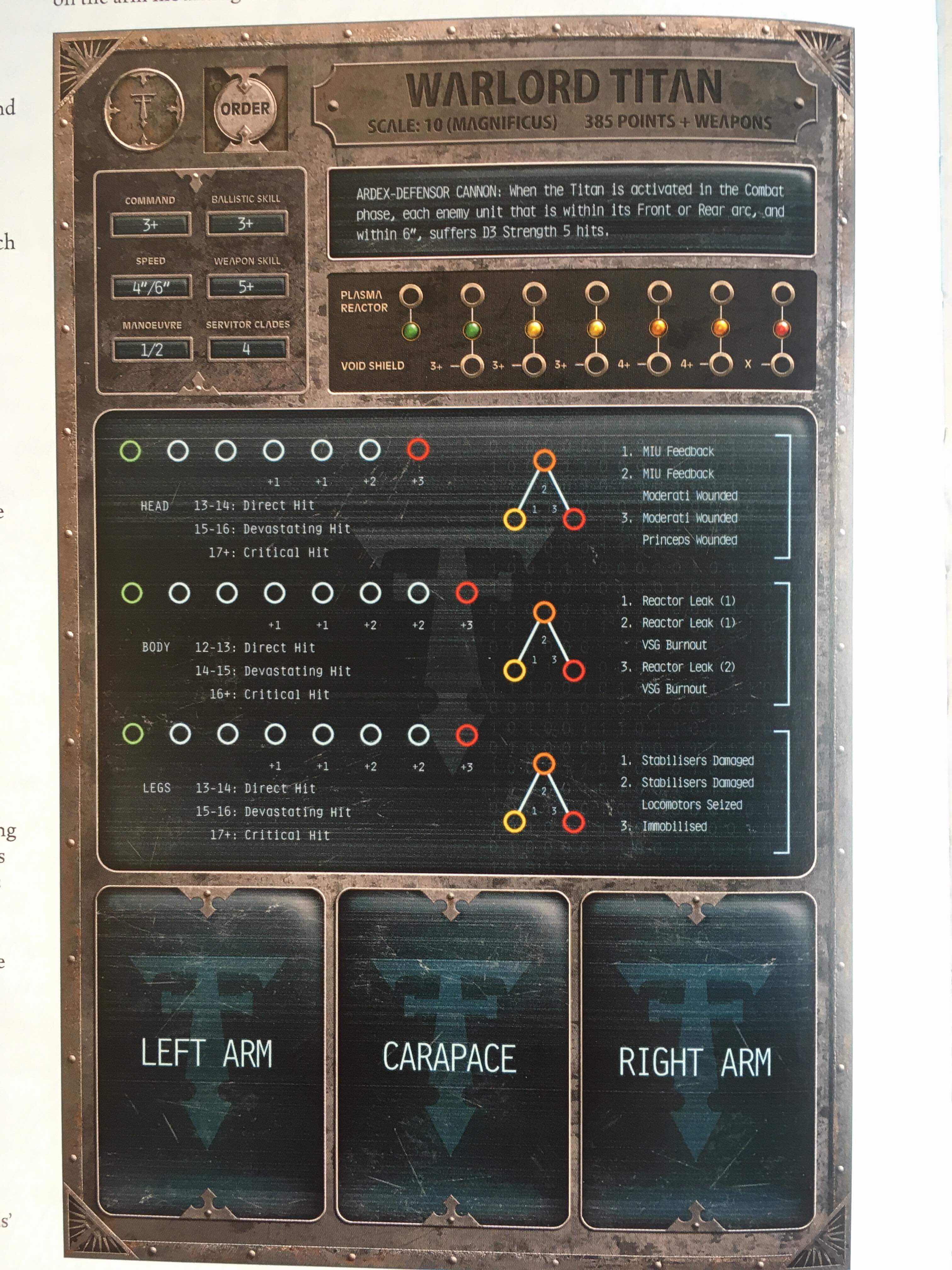 So now you have repaired and cooled your reactor its time to set the sky on fire like its New Year’s Eve in the combat phase. The Warlords that we have used so far were equipped with dual Belicosas and an Apocalypse missile launcher. As with the tactical depth in previous stages, the same is true here. The player with initiative chooses their engine and unleashes on the chosen target. It is very important to choose which weapons that you shoot with first as more powerful single shot weapons are less effective at removing void shields than slightly weaker multi-shot weapons. In this example, I would choose to shoot with my missile launcher first. It has 10 shoots and it can strip back void shields faster than a servitor’s knickers in a cigar club. Once the shields are down you can throw your two Belicosa shots at the target and they can cause some serious damage. Again, it is worth mentioning that, unlike the apocalypse missile launcher, the Belicosa shots require a roll on the plasma reactor table which can mean anything from 0-4 heat being generated (when you get to 8, I believe, you roll on the reactor damage chart and you will most likely blow or lose a limb lol) or the machines spirit being roused with hilarious consequences. Angles of shooting are important with it being easier to damage from behind and you can also opt to target specific areas of a titan at a cost to the ballistic skill roll (+2). Once the first player has completed their shooting with an engine then the players alternate again until all engines have shot or done hand to hand (something I haven’t had a chance to do yet). 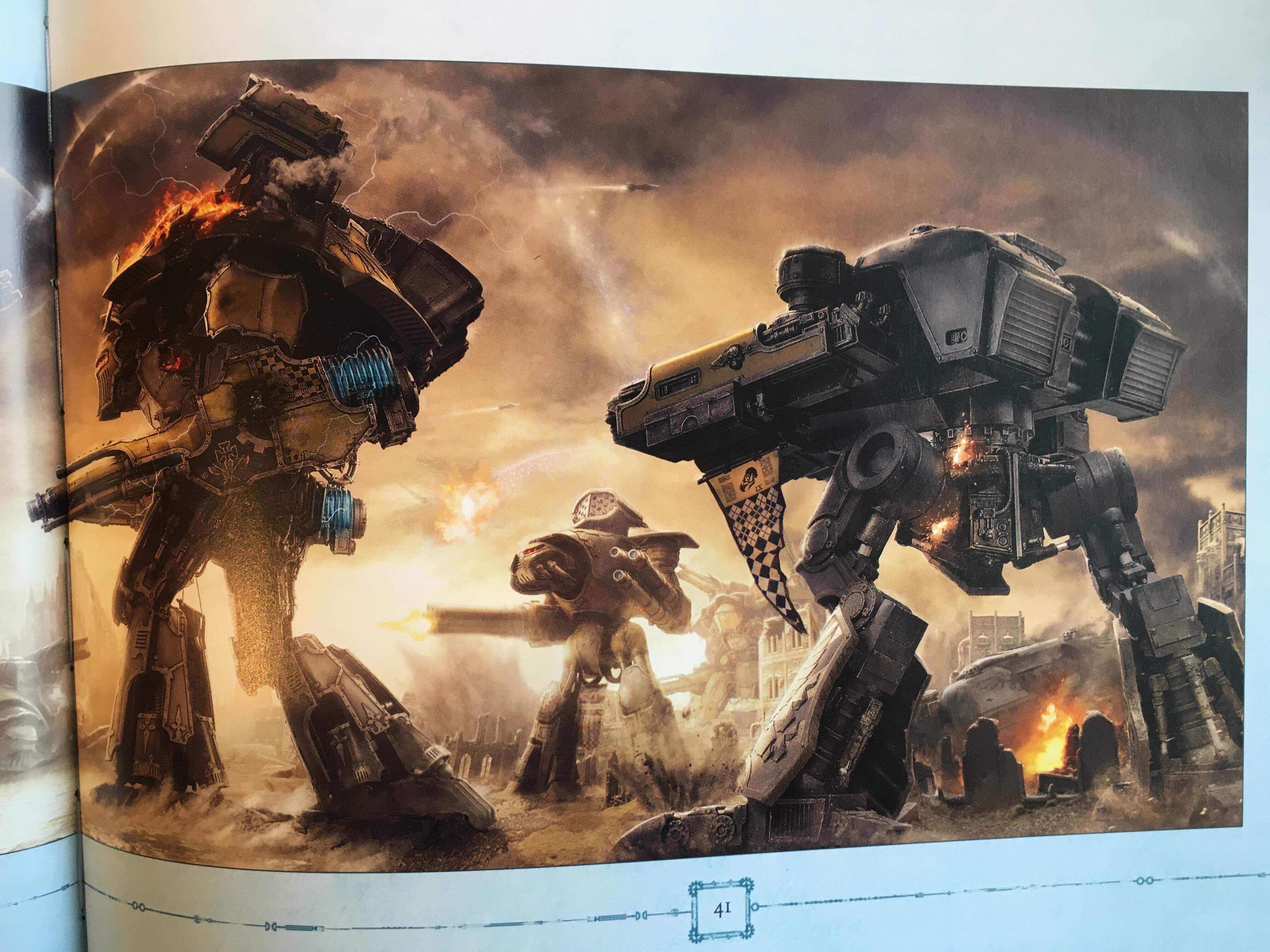 Finally, there is the end phase where players go through any engines and there may be enforced actions that take place here. For example, an engine may have damage to his leg and make have a pivot action that they need to make. 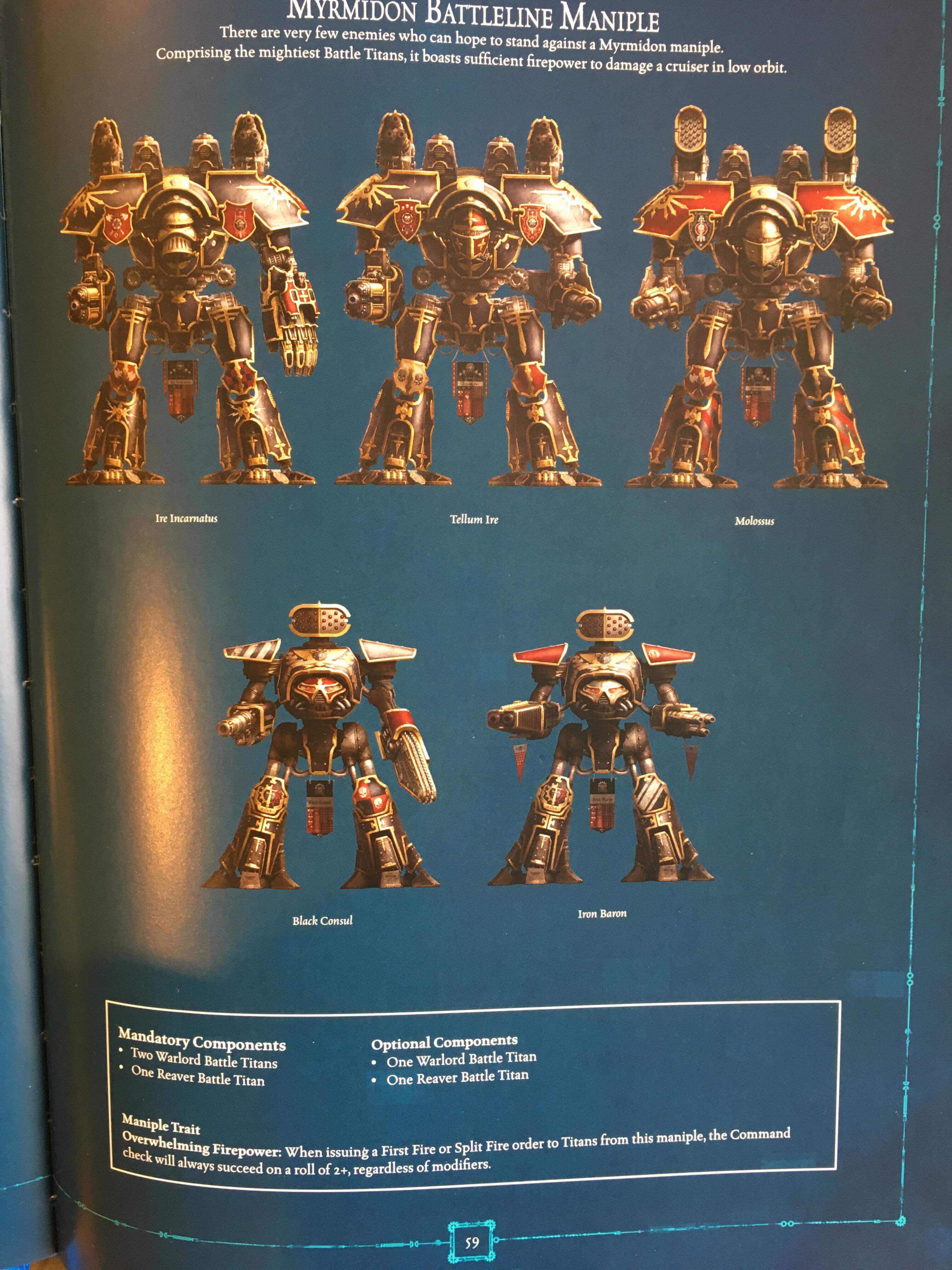 Overall, the game feels balanced so far but that may be because I have only played Warlord vs Warlord with exact same loadouts. I have won a game and lost a game. From my experiences so far, I feel as though the game can be won or lost more in the strategy phase than anywhere else, which is great because it really feels like choices matter. Movement hasn’t felt like it mattered (probably because it was a 1 vs 1 on a 2’ x 2’ tile with no terrain and the Warlord only has a 4” move unless you push the reactors) quite as much but once other engines are released I am sure that will change. I do worry about longevity of the game due to lack of factions however and I feel that it is a poor decision to keep it to just titans. I am not a big fan of tournaments at the best of times but, with such little variety in engines currently, we know of 4 only, I can see almost everyone taking Warlord spam. I don’t see many other engine types doing much damage against them unless they find a way to get behind them. Of course, with such long range the Warlords could sit with their backs into a corner, hurling out abuse like a drunken relative at a Christmas party (you know which one!) and not care about objectives. Still, this criticism could be levelled at any game and is more about the opponent than the mechanics of the game. 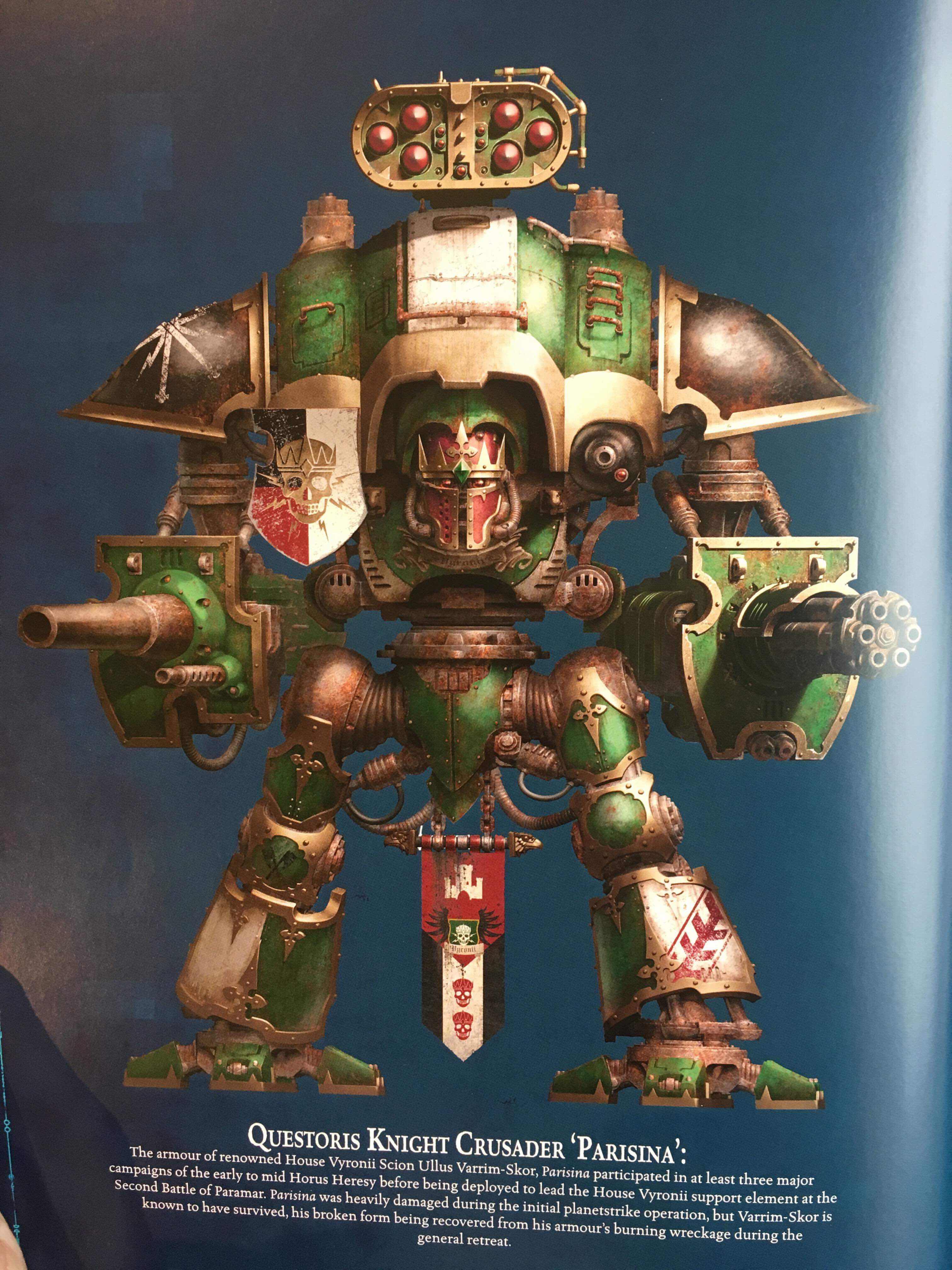 My only other negative about the game is more of a preference for my style of tabletop gaming. I like to have strong narrative tying my games together and not just rehash old battles. For me, Titans are not a compelling, characterful construct. I get it that you have different personalities in Princeps and rivalries between Legios and houses but that just isn’t enough for me personally. AT is lacking something between its legs and that is infantry. Forge World have said that they aren’t going smaller than a knight and for me that takes this game from a must-have to a ‘wait and see’. I will be buying a maniple to play against my friends at Battle Bunnies, but I don’t know how much game time they will see and that’s a shame because it really is a great game. I hope that the game progresses and other races and infantry are added (this is a far better scale for the Horus Heresy than 28mm) as I think I would spend a lot more time playing it then.

My final thought is this: The game is a fun, tactical and a welcome addition to Games Workshops other systems. I look forward to having a painted Legio Praesagius Maniple which will probably feature on Battle Bunnies as part of the Calth campaign. I also look forward to sitting down with a beer and playing a few standalone games on a Friday evening.

Thanks for reading my review, if you have any thoughts or comments please write below. I try to respond to all messages.