This weekend Kaelo, Ghroll and I have put together the models, read the rulebook and had our first 'Quick-Start' game of Shadespire.

Firstly, I'm pleased that the models are as easy as they look to put together, if not easier. Kaelo was timed clipping, trimming and assembling one of the miniatures, and it took 1minute and 11secs. The only thing that I think lets the models down are that they seem to be made with quite a soft plastic, and I think it'd be quite easy to scratch or break some of the more delicate pieces.

We started playing the game with the Quick-Start Sheet, as it gives a well-rounded explanation of the basics of moving, charging, attacking and defending. It gives enough to be able to move into playing the game confidently with all of its additional cards, objectives etc. without feeling overwhelmed. You are required to assemble four fighters - the Liberators Severin Steelheart and Angharad Brightshield, and the Bloodreavers Garrek Gorebeard and Blooded Saek, and also find their fighter cards.  Pictures included below of our Quick-Start Sheet game:

As part of the Quick-Start sheet, two fighters Severin Steelheart (blue) and Garrek Gorebeard (red) are placed on the board, at least 3 hexes apart. 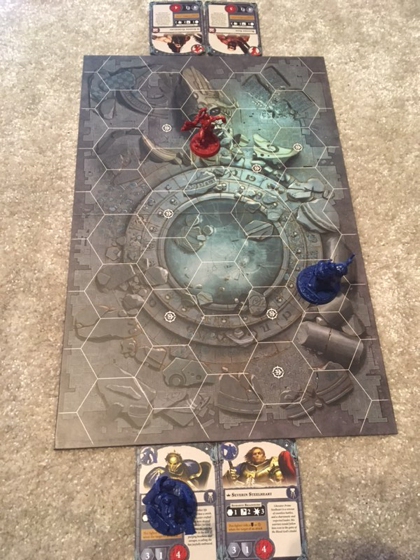 When you move a character, you can move them up to a number of hexes that is equal to their Move characteristic. Severin can move up to 3 hexes, and does so as below. Once a character has moved, they cannot move again until the next round. So a move token is put next to Severin as a reminder.

It is now Garrek's turn. An attack with a Range characteristic of 1 means it can only be used against an adjacent fighter, meaning that Garrek can attack in this scenario. When you attack, you roll the number of dice that is detailed on the fighter's card. The fighter card also details a symbol and this tells you what symbol you need to roll for a successful hit, and there is also a 'critical' symbol which hits regardless.

When a fighter is a target of an attack, you roll a number of defence dice equal to the Defence characteristic detailed on their fighter card. Similar to attacking, when you defend, you roll the number of dice that is detailed on the fighter's card along with a symbol. The fighter card also details a symbol and this tells you what symbol you need to roll for a successful save, and there is also a 'critical' symbol which saves regardless.

Once all the dice have been rolled, whichever fighter has more successes wins. If the attacker wins, the target suffers damage equal to the Damage characteristic of the Attack action. That number of wound tokens is then put on the target's fighter card. When they have as many wound tokens as their Wounds characteristic, they are taken out of action and removed from the game. 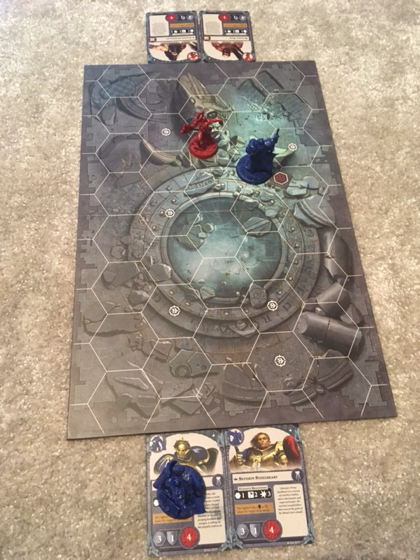 Next, we're going into charging. It's the Liberators' turn to act, and Angharad is placed on a hex on the game board, within 3 hexes of Garrek. 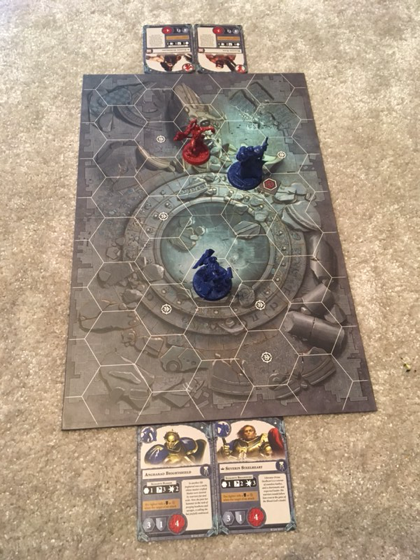 Angharad will now charge at Garrek. When a fighter makes a Charge action, they can move and attack at the same time. It's very powerful, but means that they cannot do anything for the rest of the round so must be used wisely. Angharad moves so that she is adjacent to Garrek and attacks. As she is next to Severin, she has support in attack. When you have friendly fighters adjacent to the same enemy fighter they assist each other, making it easier to land a hit or fend off a foe. When Angharad makes an attack with Severin standing next to her, an additional symbol on the dice also counts as a success (this works the same for defence). Once Angharad has made her attack, a charge token will need to be placed next to her, as a reminder that she can't do anything for the rest of the round. 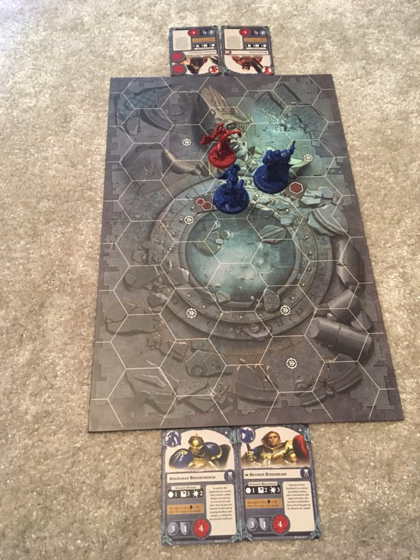 As you can see on Garrek Gorebeard's fighter card, he has a total of 4 wounds on his Wounds characteristic. During Angharad's Charge attack, Garrek has taken 2 wounds and so the same amount of wound tokens are placed on his card. 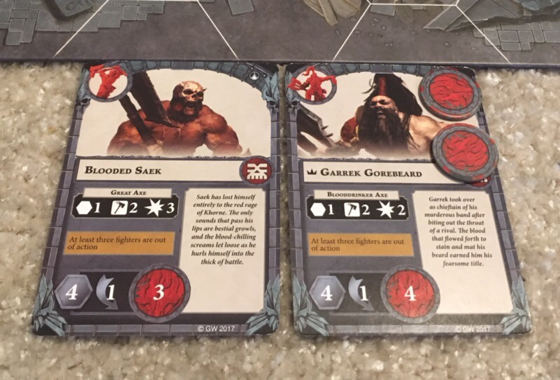 At this point, the Liberators have each had 2 activations (a Move and a Charge) while the Bloodreavers have only had one (an Attack). In each action phase, each side can take 4 activations (which is in most cases, simply taking an action with a fighter). If no one can move or attack, you can pass, doing nothing, and this will count as one of the activations. Once both sides have taken 4 activations, the action phase is over and the end phase begins.

Blooded Saek is placed anywhere on the game board for this next section.  It is now the Bloodreavers' turn to take an action, and we continue to finish the action phase. 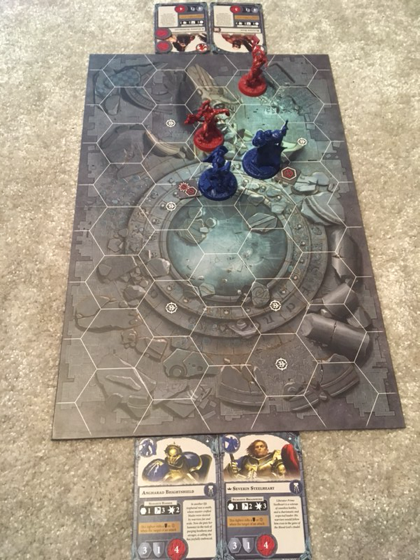 Blooded Saek attacks Severin Steelheart and he takes 3 wounds as he is unable to defend himself, even with the support in defence in place. 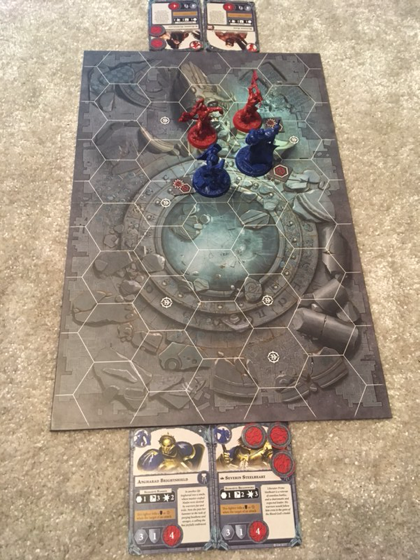 As Severin has taken 3 wounds, he has had 3 wound tokens placed on his fighter card, and he is left with only 1 wound remaining. 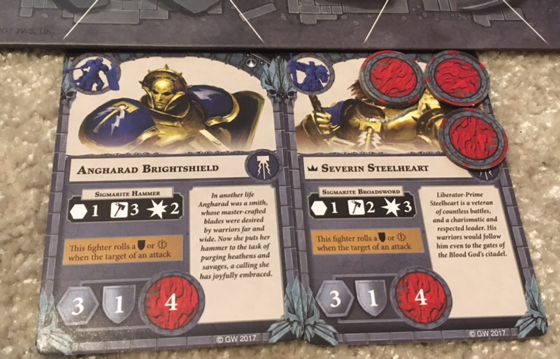 The Liberators take their next turn, attacking Garrek Gorebeard. 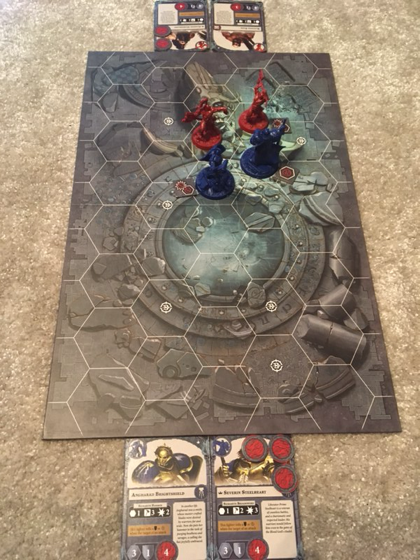 Garrek is unable to defend himself and takes another 2 wounds. As he has already had 2 wounds and his Wound characteristic is 4, an additional 2 tokens are placed on Garrek's fighter card and he has been removed from the board. 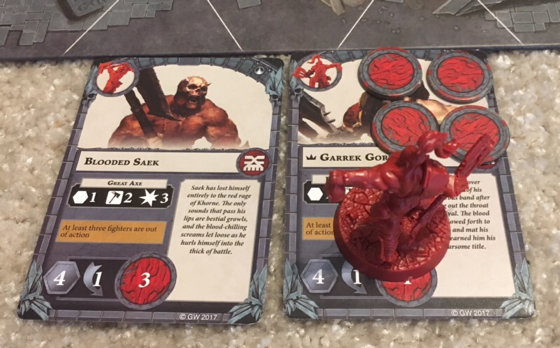 It is the Bloodreavers' turn, and Blooded Saek attacks Severin Steelheart. The attack is defended, and Severin loses no wounds. Severin fights back and his attack hits. As Blooded Saek has no support in defence, he's already at a disadvantage and his defence lets him down. 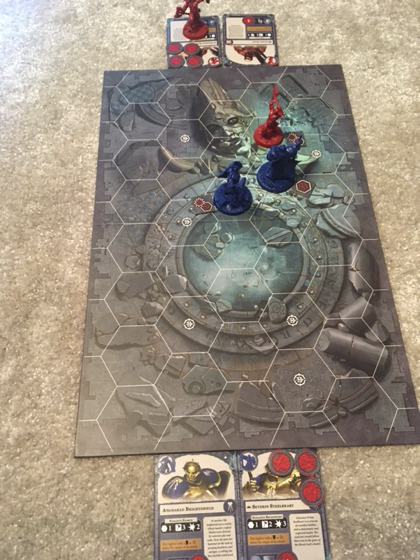 Blooded Saek has been removed from the board, as he has taken 3 wounds from this attack, which is equal to his Wounds characteristic. 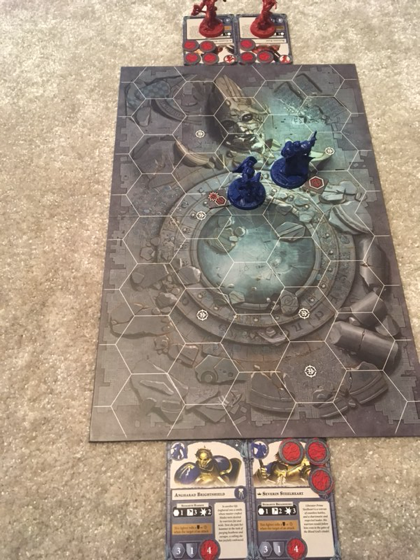 3 wound tokens are added to his fighter card as an added measure. At this point, we will have reached the end phase, where all tokens are cleared from the board and any fighters who have moved or charged will once again be able to do so. It's then the end of the round, and the next round begins. 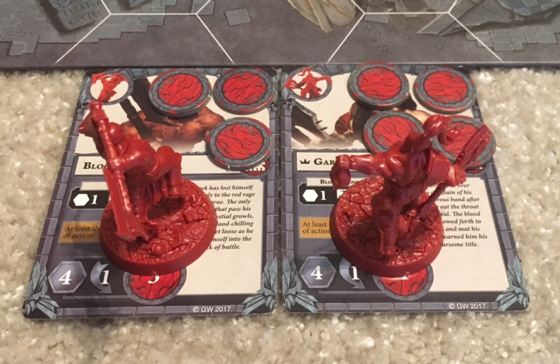 It's worth noting that this is a very simplified start to the game, in order to introduce you to the basics of the game before bringing in the more complicated aspects.

Age of Warhammer will be looking to play and review a full game of Shadespire within the coming weeks, so keep your eyes peeled for some more detail on that.

If you have anything you'd like us to cover on the game, please comment below and let us know! :)

Thanks for reading and stay tuned for further content in the coming weeks.

Danariel x
Posted by Unknown at 17:56