Whilst Kaelo and Aveinus were away at Warhammer World at the New Year’s open day, I found myself sat at home finalising my thoughts on starting an army.  If you read Kaelo’s post last week, you will know that I spent a part of this weekend assisting with painting some Citadel Mighty Empire tiles.  This really reminded me of how much I enjoyed painting, and it got me thinking about having an army of my own where I can have full artistic license!  I have never been one for half measures, so after some deliberation, I quickly decided that I wanted to start with a unit of Shadow Warriors.  This was an easy choice for me, as I’ve always loved the Elven look and fluff.  After reading the backstory on the Shadow Warriors, I was sold on them being the first part of my army.  I asked Kaelo to pick up a box, and I am soon to be on my way!

I’ve decided I would like these to form a part of an Aelf army.  There seems to be a lot more variety in choosing this unit to fall into the Aelf faction rather than the more specific Swifthawk Agents or another.  As this is my first army, I want to make it as flexible as possible.  I’m not entirely sure on which direction I am going to go with these, but I plan on documenting each step I take.  I know that I want to convert these to a female unit as although I am not a girly girl, I think we could inject a little more femininity into this world.  I know that my colour scheme will consist of dark tones to match the Shadow Warriors identity, and there will be absolutely no pink involved!

Although I still have a lot of decisions to make on the dynamics of my army, I am certain I would like to use the Mistweaver Siah as my hero.  I love that little is known about her except for how powerful she is, which leaves so much to the imagination.  I’m attracted to the idea of using an enchantress as I think that magic brings an element of mystery to a character.  There’s a certain look to her which I think matches the Shadow Warriors perfectly.  I will be looking to build my army around these characters, depending on how these go! 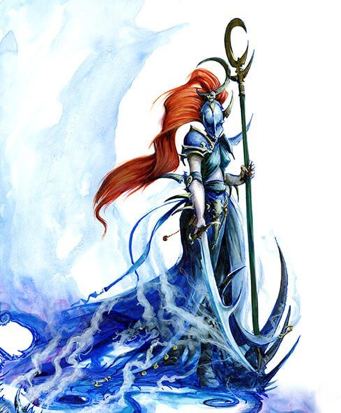 Stay tuned for more progress as I continue.